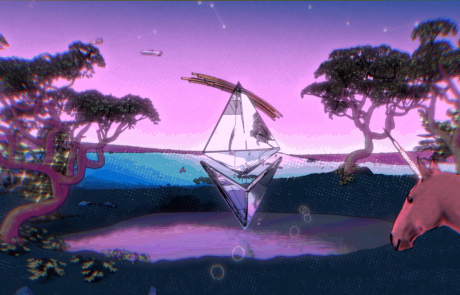 Notorious digital artist Pplpleaser shared a picture of herself crying… but out of joy. All thanks to the booming interest around NFTs.

The artist, who has a reputation not only in the DeFi scene but also in the wider, more “mainstream” art industry, put an NFT up for sale on the auction platform Foundation.app. And things went really well.

Pplpleasr’s token depicts an animation of a Uniswap-esque unicorn on its journey to reach the “Ethereum Promised Land.” On its journey, it wakes up different elements related to the DeFi industry. The name of the piece is “x*y=k”

My genesis piece on @withFND, the @Uniswap animation will drop Friday 9am (Asia time)This Friday, March 26 is the #StandWithAsians movement – Uniswap and I will be donating all proceeds to charities supporting AAPI and other minority representation. https://t.co/OMvO8IlzCE pic.twitter.com/6REHwawYzY— pplpleasr (@pplpleasr1) March 25, 2021

Everything was carefully chosen during the making of this art piece. Each scene has a specific inspiration, each stroke has a meaning, and even the colors of the curves emulate the colors of the various DeFi tokens that exist right now.

The auction lasted for one full day, and the bids came in quickly. Within 5 minutes of the auction start, someone had already offered more than $15,000. 3 hours later, the price was already double that, and 4 hours later, it was over $100,000.

The winner was PleasrDAO, a fund created specifically to buy this NFT.

Having a DAO explicitly created to buy her works was certainly an acknowledgment of her dedication.

After the auction ended, Pplpleaser couldn’t be happier. With tears of joy, she tweeted to her community her words of gratitude to the entire DeFi community, especially to those who participated in the auction.

The artist said that she will donate the entire proceeds to the Stand With Asians movement. Stand With Asians seeks to spread awareness about the racial discrimination suffered by Asian Americans and Pacific Islanders.

Before her “magnum opus,” Pplpleaser was actively working in the world of cryptocurrencies. She had a very good relationship with the famous Blue Kirby —one of the OGs of the DeFi scene— and created some artwork for Pickle Finance.

Pplpleasr describes herself as a “high quality meme generator,” but her work is no small thing. According to her official website, she has worked in high-quality films such as Batman v Superman, Wonder Woman, and Star Trek Beyond. She has also made different commercials and collaborated with Blizzard game cinematics.

But perhaps the most notable thing here is that, at least, she actually likes crypto and believes in NFTs.