Cardano Price Making An Attempt to Higher, $2.5 Target Fixed Within a Month

The entire crypto space is undergoing extreme uncertainty where-in the next move is becoming more and more tedious to presume. While the most dominant crypto, Bitcoin, is attempting very hard to forecast a stable rally, the selling pressure quickly mounts which signals the possible downtrend for the next couple of days. And within such a hazy environment, Cardano(ADA) price also swings along with the support levels.

Previously, the top 7th largest crypto made an attempt to rise above the consolidation yet failed to do so. But despite the pullback, the asset maintained strongly above the crucial support levels manifesting its tendency to go parabolic soon. The present-day trade appears to be pretty bearish as the sellers are in a pretty strong position yet the buyers are also giving pretty good competition. 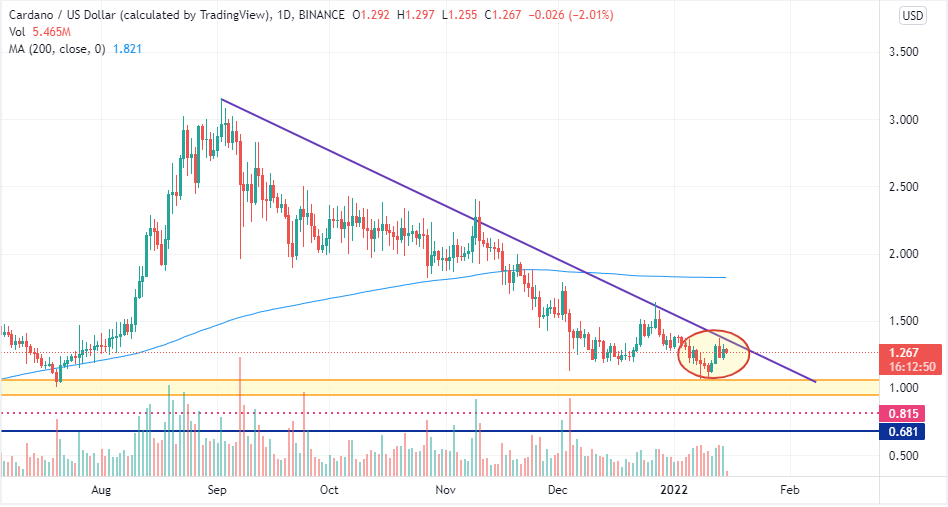 The ADA price is currently attempting to make a ‘V-shaped’ recovery so that the resistance levels along the trend line initially and later at the 200-day MA levels are cleared. Yet with the fresh day plunge, it appears that the asset is primed for yet another accumulation phase. The asset now may consolidate until it reaches the apex of the descending triangle which may take another week’s time from now. Only if a huge bullish push could invalidate the consolidated trend.

In the smaller time frame, the ADA price appears pretty bullish as the asset maintained a notable uptrend and later began with a healthy consolidation. Therefore forming a bull flag pattern, the asset showcases a possibility to rise above the consolidation in the next couple of hours. 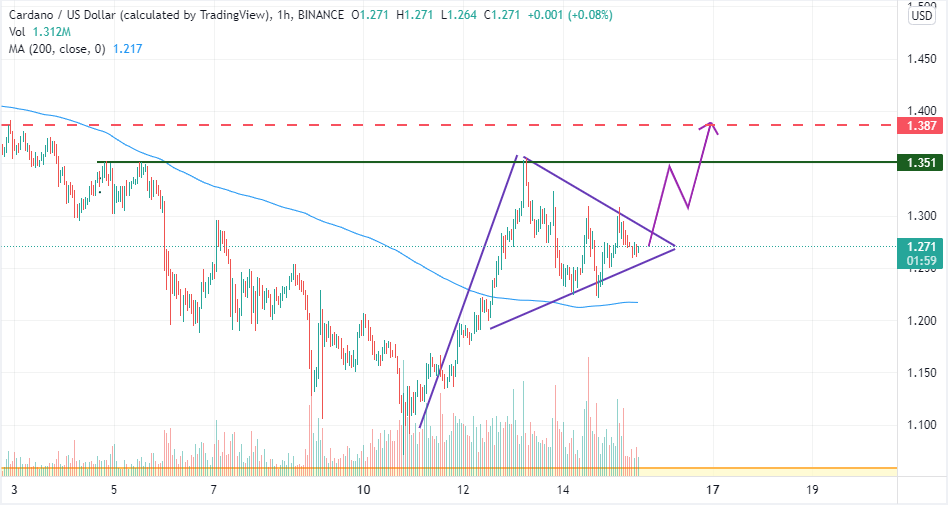 The ADA price as shown in the above chart may attempt to slice through the flag and rise high to test the immediate resistance levels around $1.35. Yet the upper resistance at $1.38 to $1.4 may certify with a strong uptrend which may assist the price to rally beyond $1.5. However, it is required for the bears to remain calm for some time else the consolidation may continue for an extended period.

Cardano appears to be in a pretty strong position, yet the asset requires a huge bullish momentum with a heavy buying pressure to slice through the $1.5 resistance levels. However, the ADA price is expected to accumulate throughout the upcoming week until the market sentiments turn slightly bullish. Cardano at the Cliff of the Inverse Mountain!! ADA Price Primed for a 50% Jump Soon!