Will DeFi’s Be The Only Way Out For The Crypto Industry’s Ails This Q1? The cryptoverse remains to be stuck in a quagmire, where digital assets have been bogging down on gains. With billions being already lost in the swamp, folks from the industry are now waiting for a pull out from the gloom. While mainstream cryptos have been moving in ruins, eyes are now pinned on emerging protocols such as DeFi, NFTs, metaverse, and gaming.

In a myriad of projects, DeFi’s have been recovering brisker than mainstream cryptocurrencies, and even NFTs. The sector which had rather been dormant for the majority of the year. Is now making its presence count with the start of a new year. Wherefore, folks from the business are now more inclined towards the sector.

The DeFi crypto market cap is presently at $139.95 B, with an increase of about 28.08% over the last day. The trading volume is also up by 28.22, with numbers at $16,993,547,906. The greener numbers of the DeFi industry are in contrast to the red ones of the entire business. Which have been lucrative for marketers in the business.

Numerous DeFi projects have been showing signs of recovery, Terra for instance is up 1.03% in 24-hours. On the other hand, Chainlink is up about a healthy 18% since a week. This is in addition to the number of protocols striding towards DeFi, which has been overwhelming for the savvies. Successively, Binance labs had earlier announced a partnership with Coin 98, the alliance will help DeFi infrastructure on Binance Smart Chain. 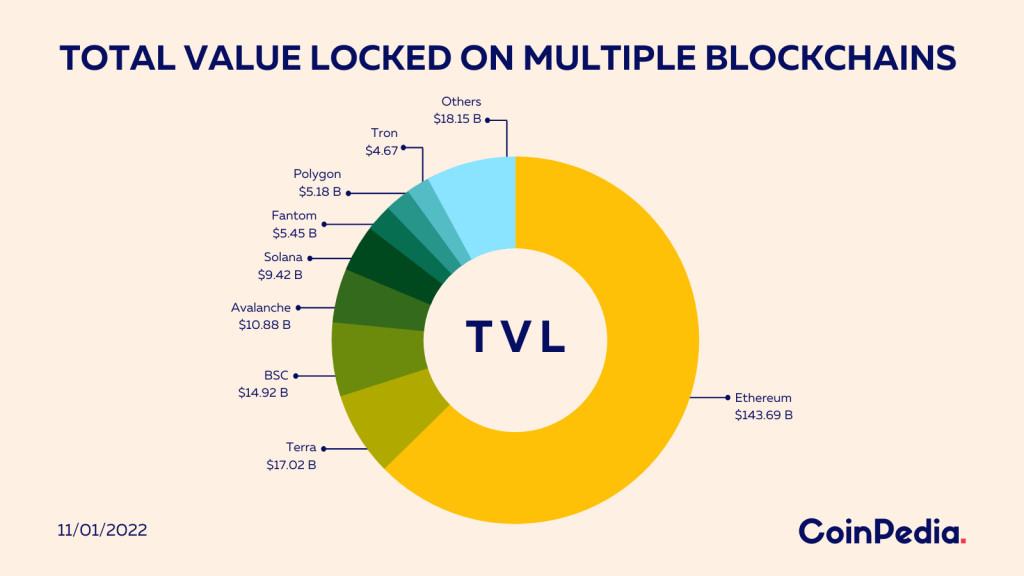 While Ethereum remains the undisputed blockchain in the DeFi space with $143.7 B in TVL, i.e a share of “62.71%”. Other protocols like Terra, Avalanche, Solana, Polygon hold TVL at $16.9 B, $12 B, $10.2B, and $5.2B respectively. Although Polkadot holds significantly less TVL at $1.6 M, it is backed by its DeFi hub Acala. However, having more TVL doesn’t necessarily mean more traffic, but it does instill faith in the community.

Are These The Go-To Protocols For DeFi Investments?

The quest for potential projects is a never-ending probe, with numerous capable protocols raging ahead of one another. The following protocols are ones that traders should not miss out on. The list includes Avalanche, Solana, and Polygon, the factors why these have emerged are as cited below.

The protocol which claims to be the fastest smart contracts platform in the blockchain industry in terms of time-to-finality. Has been making notable moves in the world of DeFi. Avalanche has $12 B in TVL, the protocol is home to numerous DeFi initiatives.

Consecutively, the latest addition comes as Circle Pay enables DeFi and other projects built on Avalanche access to native USDC liquidity via the Circle account and APIs. The fundamentals of Avalanche help the protocol establish its reign in the DeFi space.

The network has been sprawling in the diversity of the industry with its robust fundamentals. The current TPS of the blockchain is 2666 transactions per second. While the average cost is $0.00025.

The scalability of Solana ensures transaction costs remain less than $0.01 for both developers and users. Moreover, the protocol eliminates the need for L-2’s. The perks offered by the network are enticing not just for DeF is but for other projects as well. The network has been ebbing the dominance of Ethereum at a constant rate.

It Has been triumphing at arguably all fronts, as the underlying tech helps Polygon in being a better alternative to Ethereum. In addition, ZK-Rollups will help Polygon scale further in DeFis. Polygon with its TVL in DeFi at $5.2 B, and its Quick Swap DEX has been wrestling hard against the likes of layer-1s.

Collectively, the past year has been a rough sail for DeFis in the industry. This time around we can expect the space leaving no stones unturned. Since mainstream cryptos are more prone to the implications of economic decisions of nations across the globe. We can expect the diversity of the industry making hay while the sun shines.