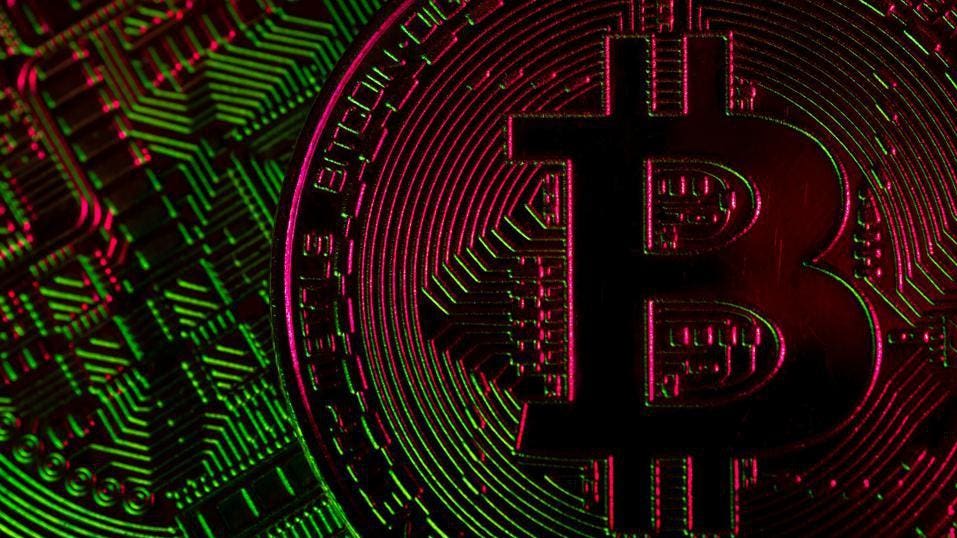 The price of bitcoin fell to a three-month low Monday morning, continuing a slide that began when the Federal Reserve sparked a broad sell-off last week by cautioning it may move more quickly than previously expected to reverse policy meant to bolster the economy during the pandemic, and experts forecast the latest crypto drawback could persist for weeks if the central bank’s hawkish stance becomes more aggressive.

Bitcoin fell as much as 5% to $39,692 by 9:45 a.m. ET, according to crypto data website CoinGecko, bringing its losses to more than 12% since the Fed warned on Wednesday it may move more aggressively to remove pandemic-era stimulus as it looks to combat high levels of inflation.

In a weekend email, analyst Yuya Hasegawa of cryptocurrency broker Bitbank cautioned he expects the world's largest cryptocurrency could continue falling until the broader market, which has similarly struggled since the Fed's Wednesday announcement, digests the likelihood of the Fed hiking interest rates as soon as March.

Though Hasegawa said bitcoin could fall as low as $40,000 in the near term, the analyst cautioned the government's consumer price index report due out Wednesday could intensify the price weakness if it shows inflation spiked more than expected, further justifying the Fed’s decision to ease stimulus and raise rates.

In a Monday note, Marcus Sotiriou, an analyst at UK-based digital asset broker GlobalBlock, said he expects bitcoin will hover around $40,000 even if the CPI report on Wednesday shows inflation rose more quickly than expected last month, positing the recent sell-off has likely priced in much of the negative expectations.

On Thursday, crypto billionaire Mike Novogratz, the CEO of financial services firm Galaxy Digital, told CNBC the selloff could push bitcoin down another 8% from current prices to as low as $38,000—a level unseen since early August.

“I'm not nervous in the medium term but we're going to have a lot of volatility in the next few weeks,” the staunch bitcoin bull said told CNBC, before pointing to booming institutional adoption as a bullish indicator for the nascent space.

Bitcoin was far from alone in falling Monday morning. Over the past 24 hours, ether, binance coin and sol were down as much as 5%—pushing losses to roughly 20% apiece over the last week.

"Bitcoin remains vulnerable to a breach of the $40,000 level, and it could get bad for ether if it breaks the $3,000 level," Oanda Senior Market Analyst Ed Moya wrote in a Friday email. Ether prices clocked in at about $2,985 on Monday. "The long-term outlook is still bullish for both the top two cryptocurrencies, but the short-term is looking ugly." Meanwhile, Novogratz wasn't alone among billionaire crypto investors cheering bitcoin on during its latest sell-off: "So. much. money. patiently waiting to [buy the dip] in bitcoin," Barry Silbert, the founder and CEO of crypto firm Digital Currency Group, wrote on Twitter Saturday afternoon.

Despite bitcoin's bouts of intense volatility, Goldman Sachs co-head of global foreign exchange Zach Pandl wrote in a note to clients last week that the cryptocurrency could top $100,000 in the next five years. Pandl said he expects bitcoin's share of the crypto market, currently about 41%, "will most likely rise over time as a byproduct of broader adoption of digital assets" and that the cryptocurrency will increasingly compete with gold as a hedge against inflation.

$1.9 trillion. That's the value of all the world's cryptocurrencies Monday morning, down more than $300 billion, or 14%, since Wednesday and more than $1 trillion below an all-time high of $3 trillion in November.

Over the last five years, bitcoin prices have skyrocketed nearly 4,300%. However, the cryptocurrency is down nearly 40% from a record of $69,000 set in November.