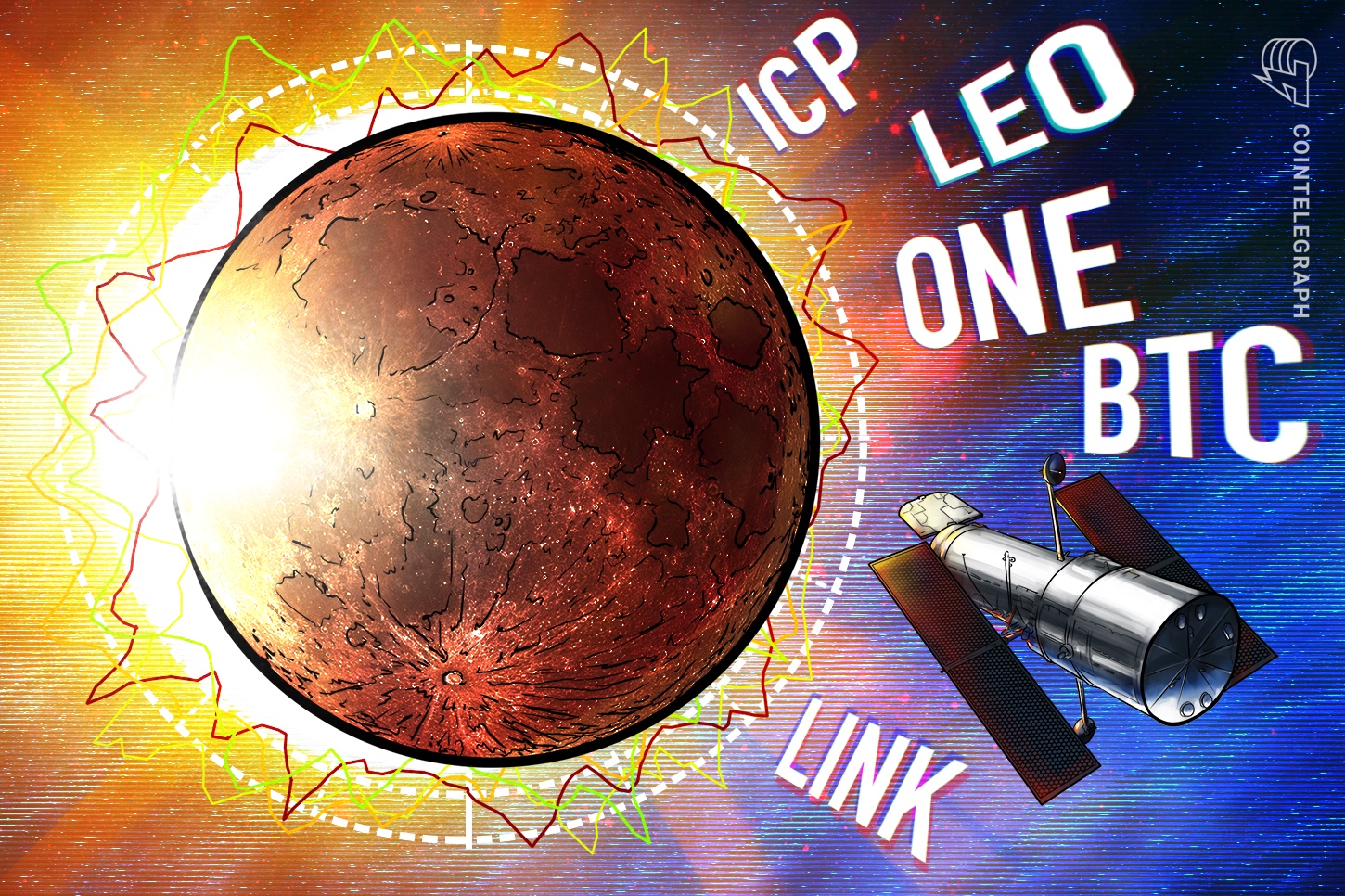 Bitcoin (BTC) and most major altcoins remain under pressure as supports give way and bears sell at each rally attempt. This negative sentiment pulled the Crypto Fear & Greed Index to 10/100 on Jan. 8, one of its lowest readings ever. In comparison, 2021 had started on a bullish note with the reading hitting levels of 93/100, indicating “extreme greed.”

This weak opening in the new year has not unnerved Bloomberg Intelligence analyst Mike McGlone who remains bullish. He said in a recent analysis that Bitcoin may rally to $100,000 and Ether (ETH) to $5,000 this year. 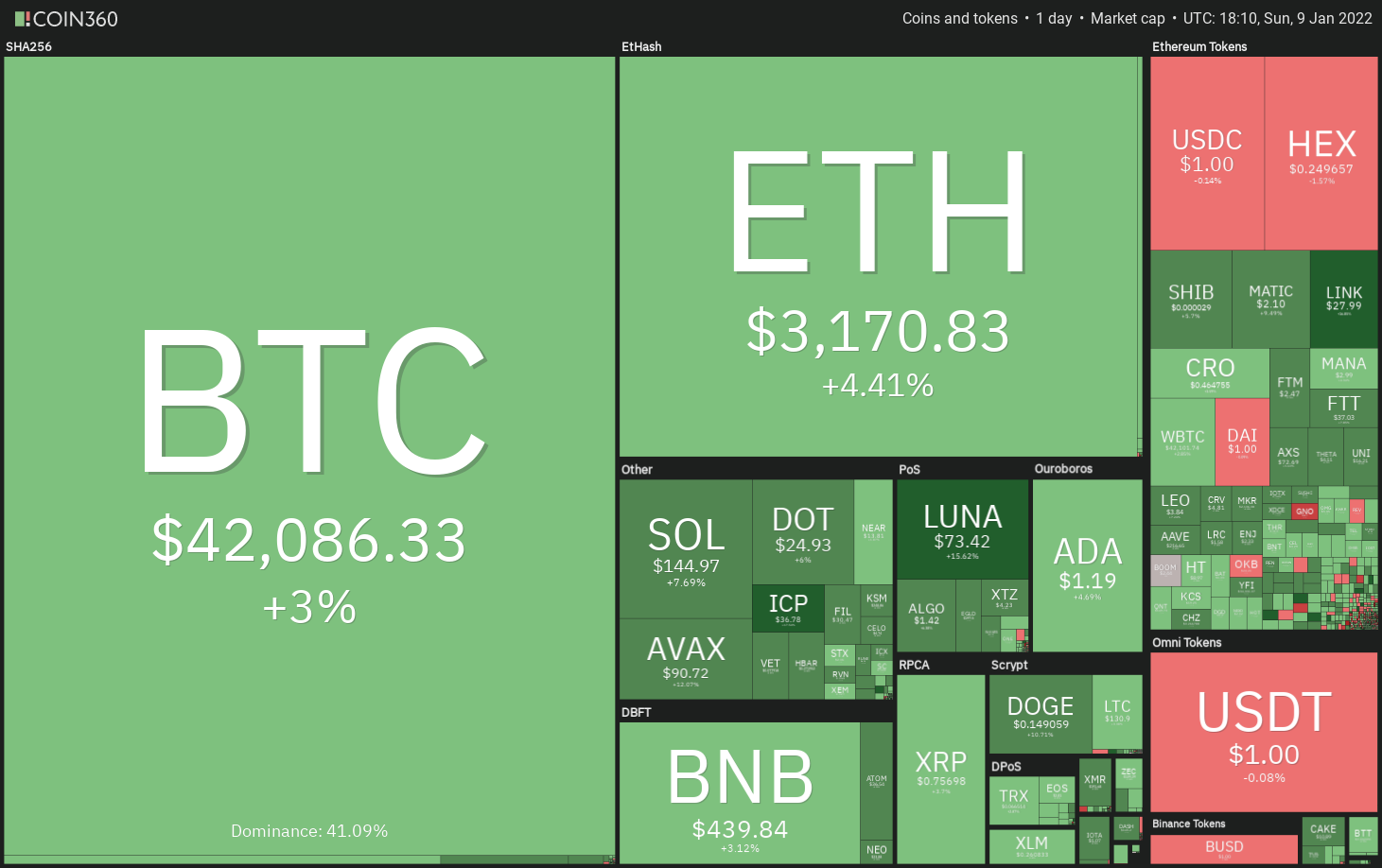 However, some analysts argue that Bitcoin may struggle to maintain its bullish trend in an environment where interest rates are rising. Holger Zschaepitz questioned whether Bitcoin could hold up without “rock-bottom rates and trillions of dollars in central bank money and government stimmy.”

Could Bitcoin bounce off the strong support, attracting buying in select altcoins? Let’s study the charts of the top-5 cryptocurrencies that may remain positive in the short term.

Bitcoin’s downtrend has reached the strong support at $39,600. The price formed a Doji candlestick pattern on Jan. 8, indicating indecision among the bulls and the bears. 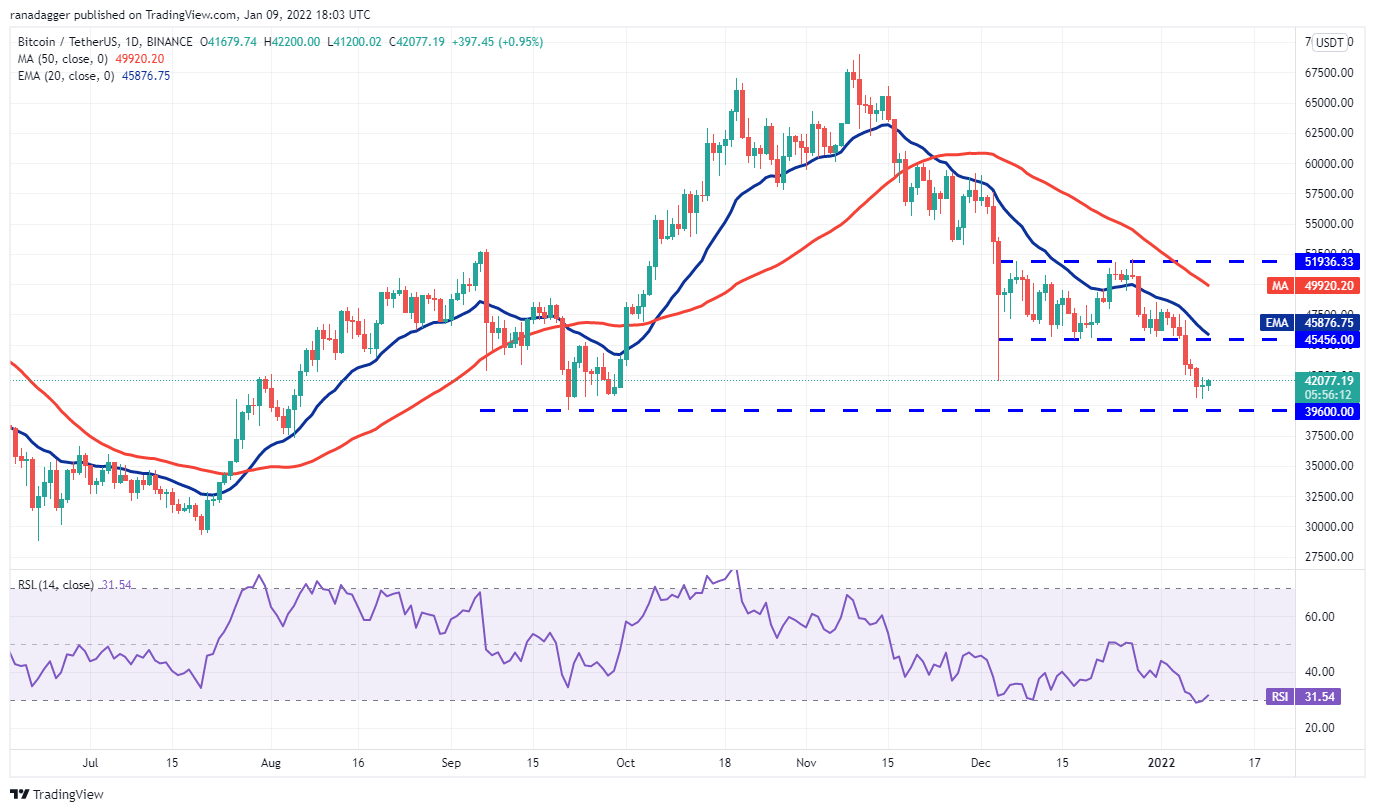 Both moving averages are sloping down and the relative strength index (RSI) is near the oversold zone, indicating that the path of least resistance is to the downside. If bears pull the price below $39,600, the selling could intensify and the BTC/USDT pair could start its journey to the next strong support at $28,805.

On the other hand, if the price rises from the current level, the pair could rise to the 20-day exponential moving average ($45,876). If the price turns down from this level, it will suggest that the sentiment remains negative and traders are selling on rallies. That will increase the likelihood of a break below $39,600 I .

The bulls will have to push and sustain the price above the moving averages to indicate a possible change in trend. 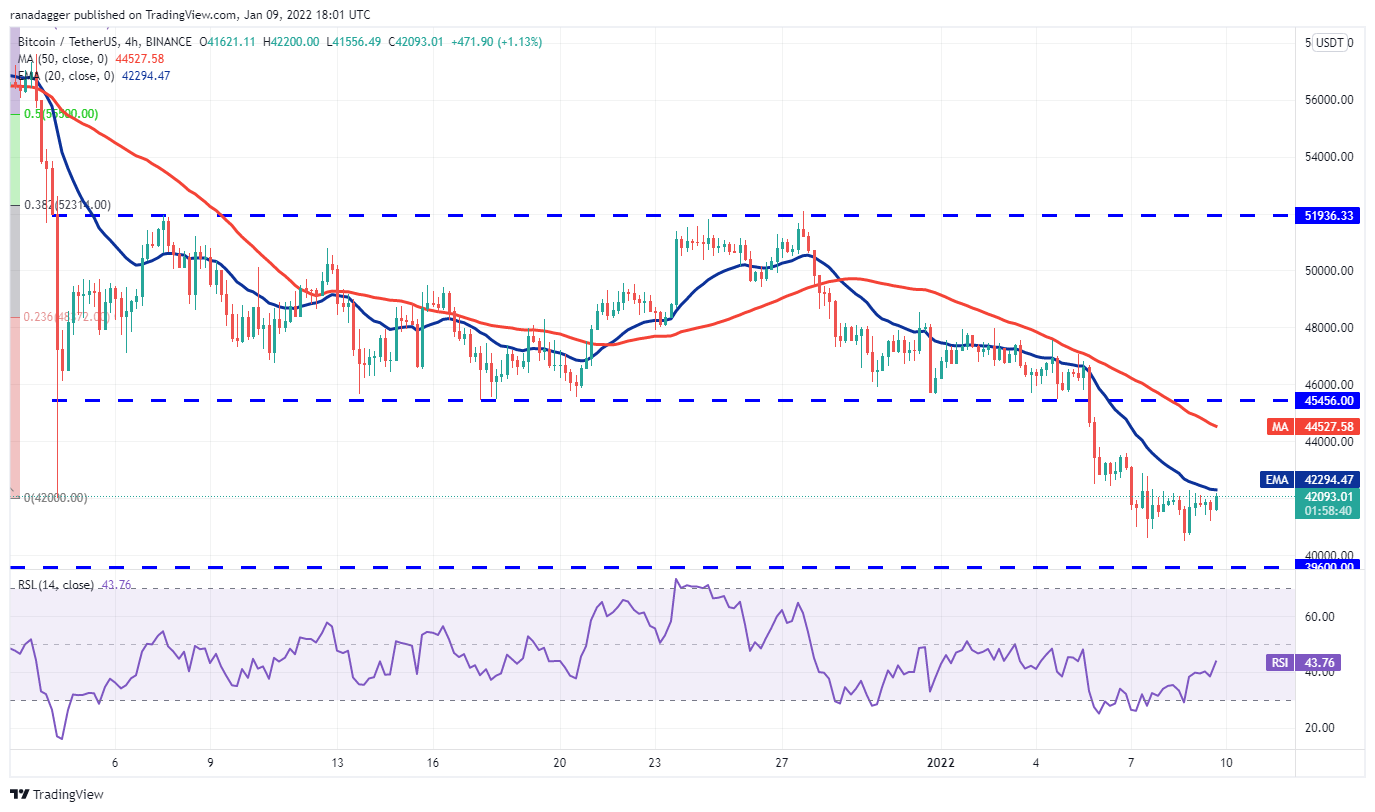 The 4-hour chart shows that the selling momentum picked up on a break and close below $45,456. The bulls are attempting to arrest the decline at $40,501 but the recovery attempt is likely to face strong selling near the 20-EMA.

If the price turns down from the 20-EMA, the bears will attempt to sink the pair below $39,600 and extend the downtrend.

Alternatively, a break and close above the 20-EMA could push the pair to the 50-simple moving average. If bulls push the price above this resistance, it will suggest that bears may be losing their grip.

Chainlink (LINK) has been trading in a large range between $15 and $35.33 for the past few months. The bulls have pushed the price above the moving averages and the RSI has risen close to the overbought zone, indicating that buyers have the upper hand in the short term. 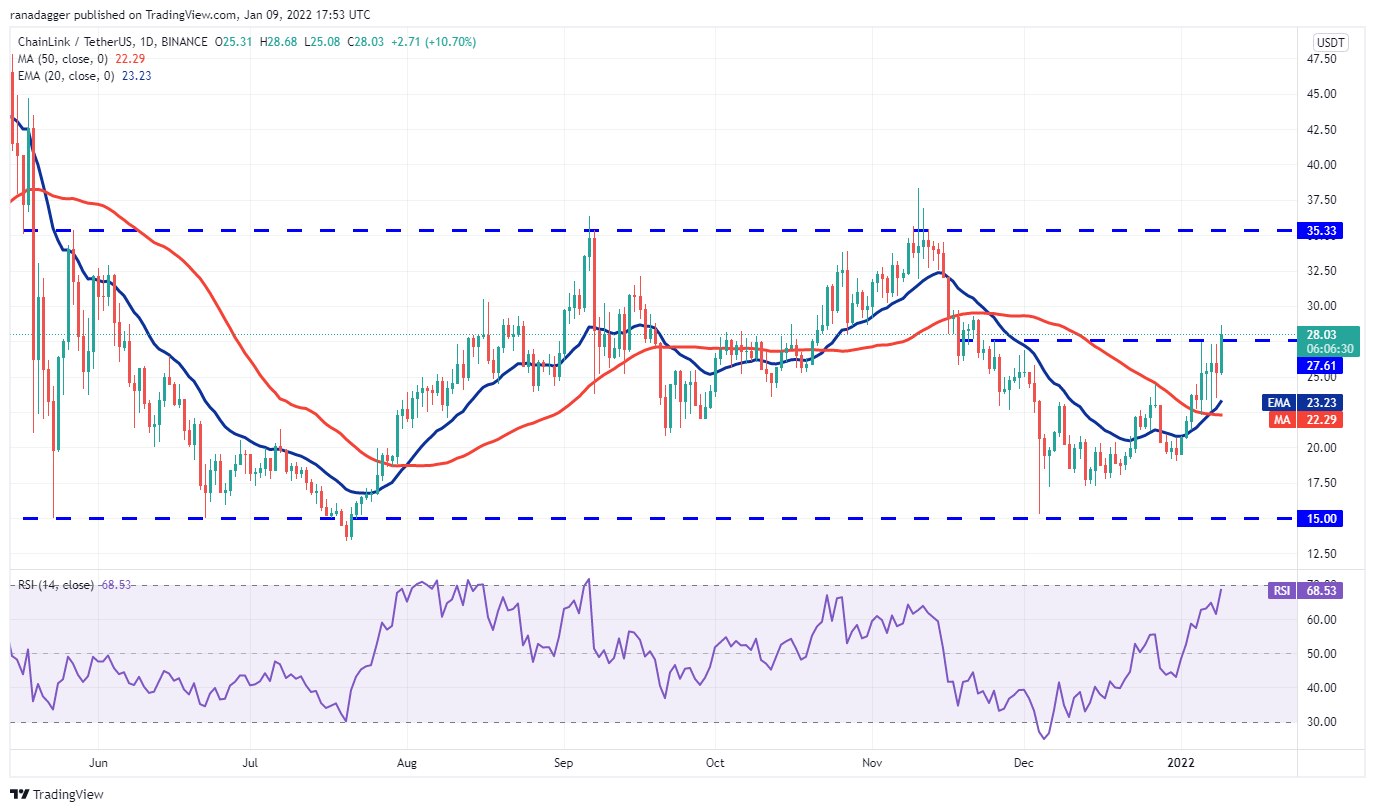 The bears posed a strong challenge near $27.61 for the past few days but the bulls did not allow the price to dip below the 20-day EMA ($23.23). This indicates that the sentiment has changed from sell on rallies to buy on dips.

If bulls maintain the price above $27.61, the LINK/USDT pair could rise to 30 and thereafter to the overhead resistance at $35.33. This bullish view will invalidate if the price turns down from the current level and breaks below the moving averages. The pair could then drop to $18. 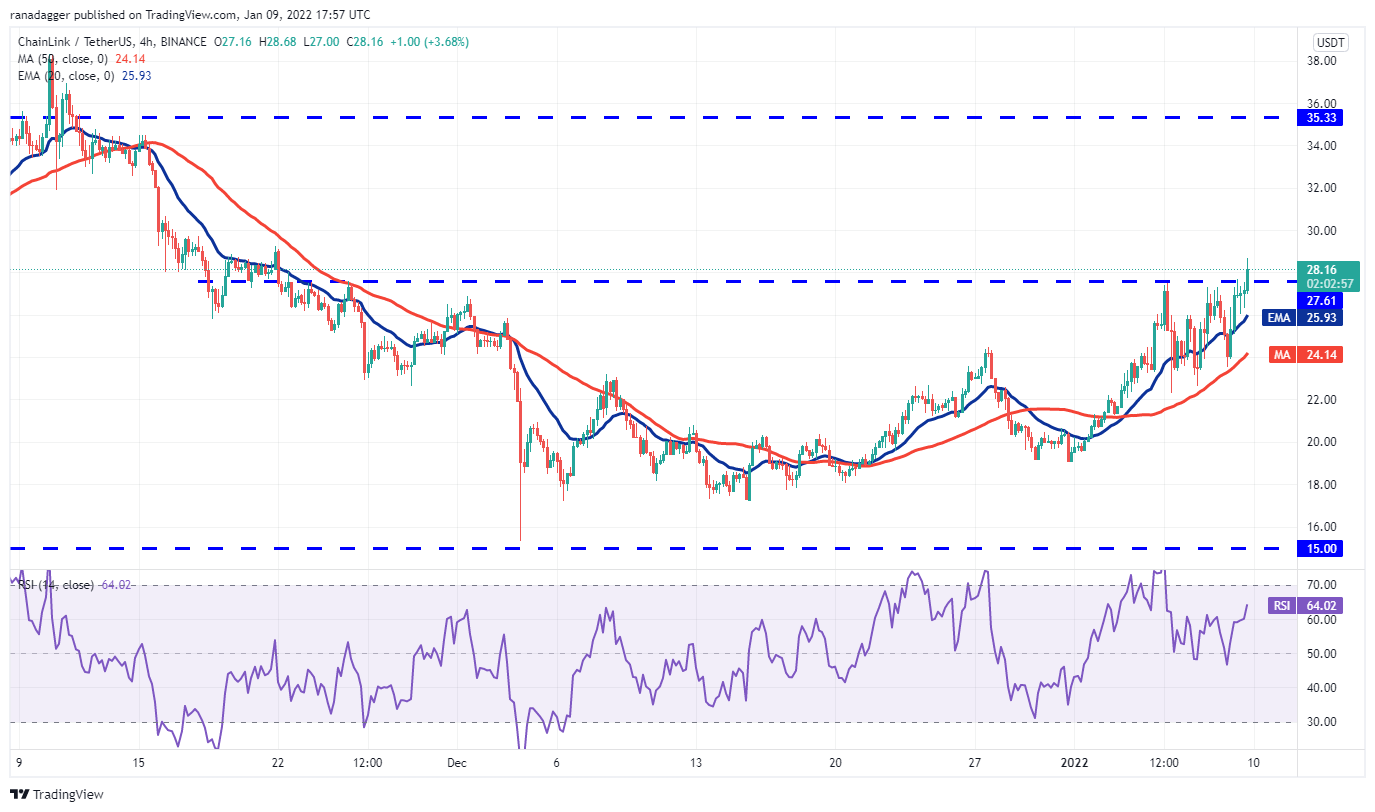 The 4-hour chart shows that the price has broken above the overhead resistance at $27.61. The bears will now attempt to stall the up-move at $30. If the subsequent correction does not break below $27.61, it will increase the possibility of a rally to $35.33.

On the contrary, if the price turns down from the current level, it will suggest that the break above $27.61 may have been a bull trap. The bears will then try to pull the price below the 50-SMA. If they do that, the next stop could be $22.

Internet Computer (ICP) broke and closed above the downtrend line on Jan. 4 which was the first indication that the downtrend could be ending. The bears tried to trap the aggressive bulls and pull the price back below the 20-day EMA ($29) but failed. 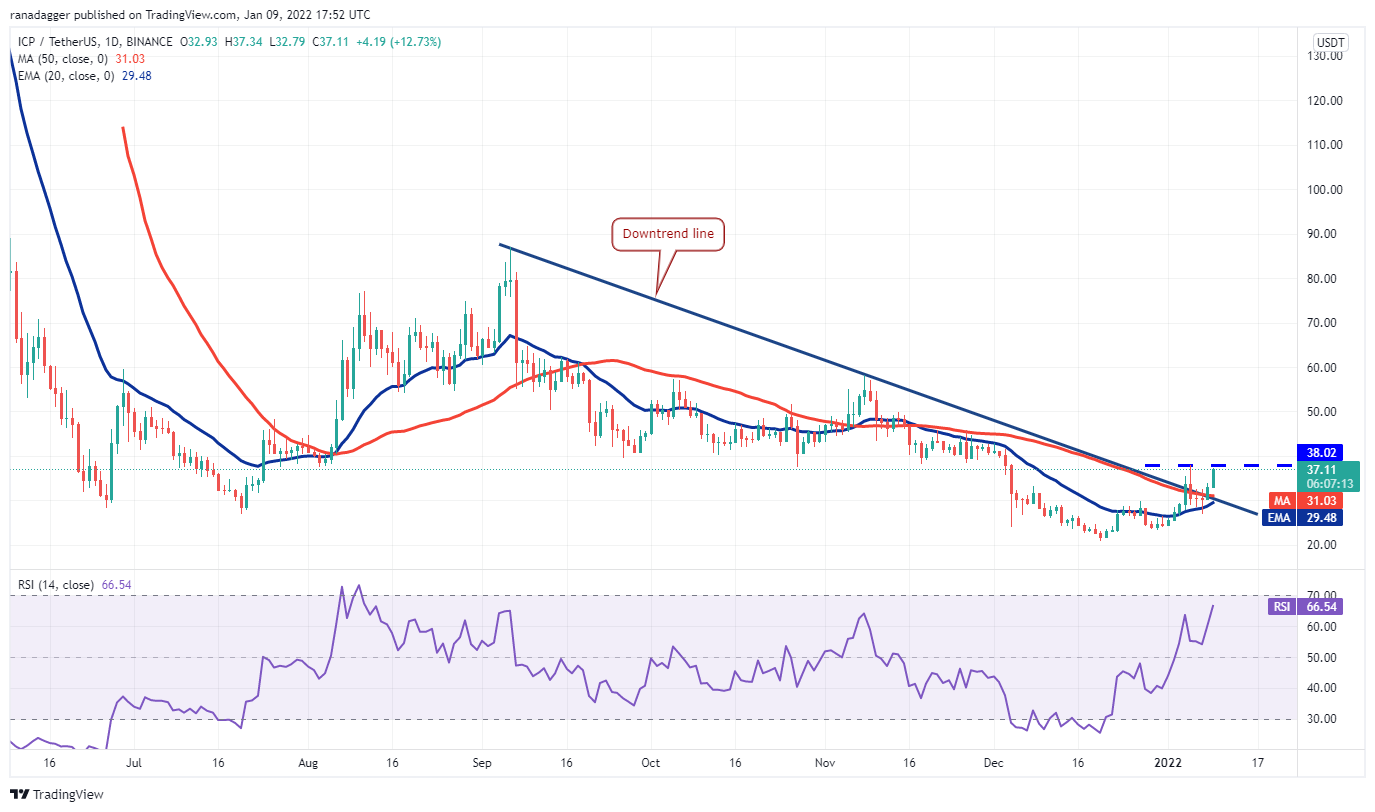 The bulls again pushed and closed the price above the downtrend line on Jan. 8. The moving averages are on the verge of a bullish crossover and the RSI has jumped into the positive zone, indicating that bulls are attempting a comeback.

Contrary to this assumption, if the price turns down from the current level and breaks below the 20-day EMA, it will indicate that the breakout above the downtrend line may have been a bull trap. 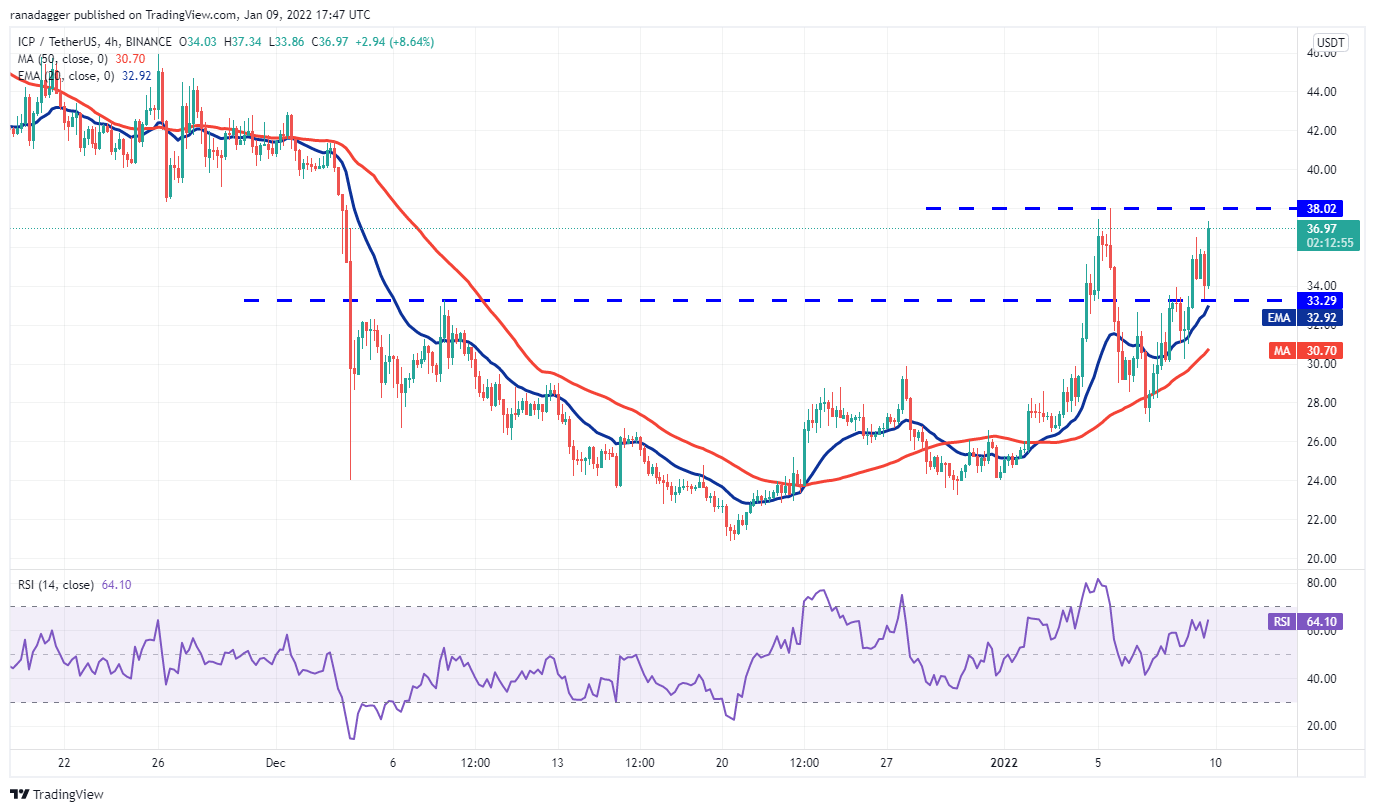 The 4-hour chart shows that bulls have pushed the price above $33.29 but are struggling to clear the hurdle at $38.02. This suggests that bears continue to sell near the overhead resistance. This has kept the pair sandwiched between the two levels.

If bulls push and sustain the price above $38.02, the pair could extend its up-move. On the contrary, if the price turns down from the overhead resistance, the bears will attempt to pull the pair below $33.29. If they manage to do that, the pair could drop to the 50-SMA.

UNUS SED LEO (LEO) has been trading in a gradual uptrend for the past several weeks where the 50-day SMA ($3.55) has been acting as a strong support. 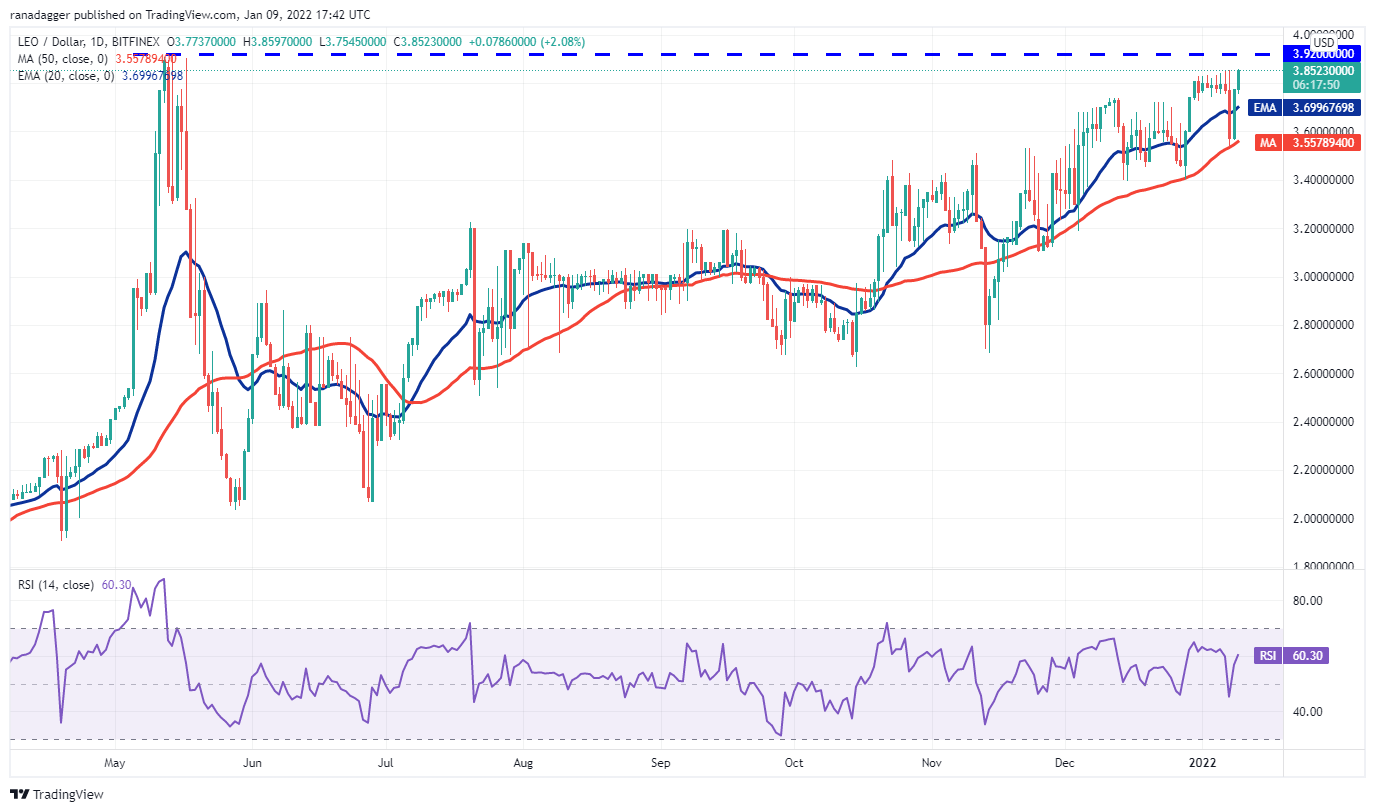 The bears attempted to pull the price below the 50-day SMA on Jan. 7 but the bulls did not relent. This resulted in a strong rebound on Jan. 8 which pushed the LEO/USD pair back above the 20-day EMA ($3.69).

The bulls will now attempt to drive the price above the all-time high at $3.92. If they succeed, the pair may resume its uptrend and reach $4.25. This positive view will invalidate if the price turns down and plummets below the 50-day SMA. That could start a correction to $3.40. 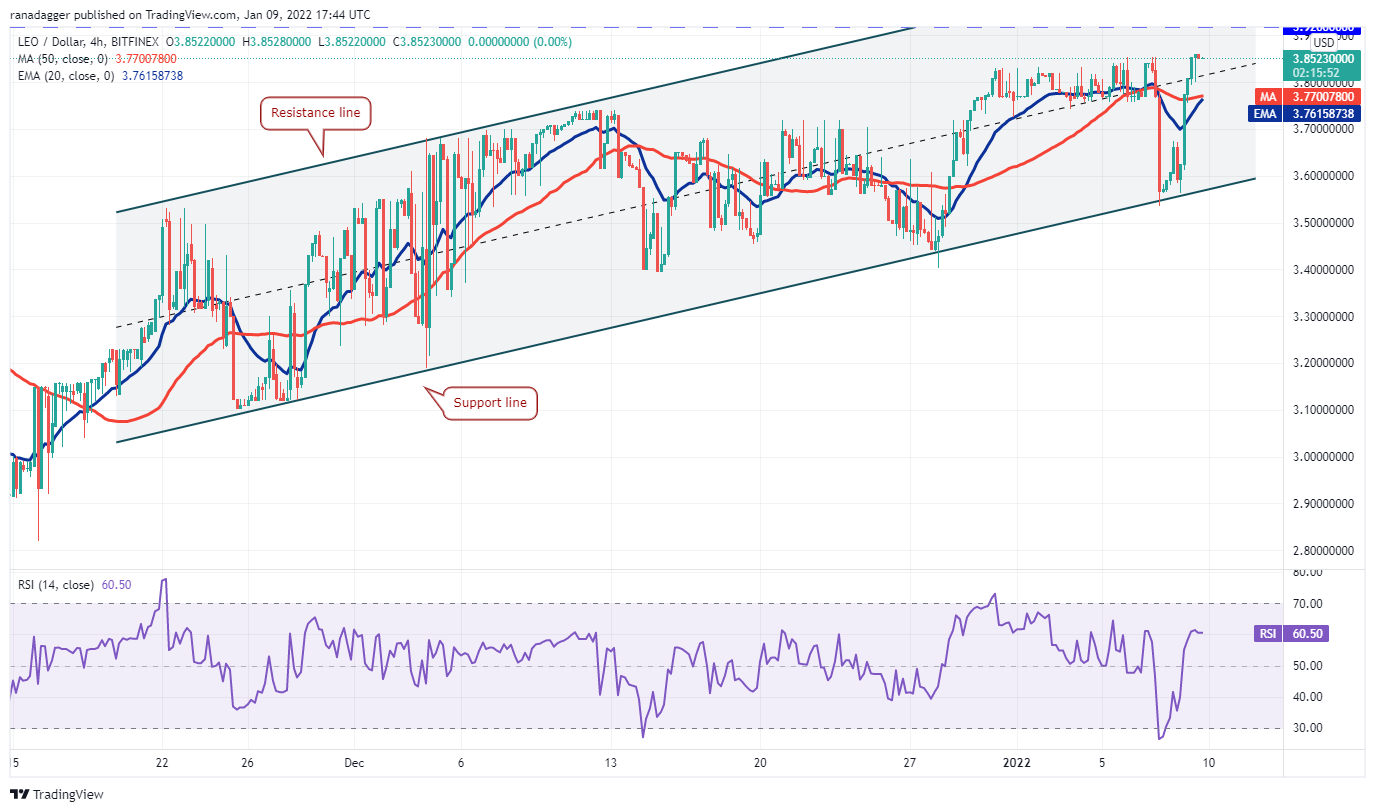 The pair has been trading inside an ascending channel pattern. The bears mounted a strong resistance near $3.85, which may have attracted profit-booking from short-term traders. That pulled the pair down to the support line of the channel where buyers stepped in and arrested the decline.

Harmony (ONE) has been trading between the 20-day EMA ($0.27) and $0.33 for the past few days. This suggests that bulls are buying on dips and bears are selling on rallies. 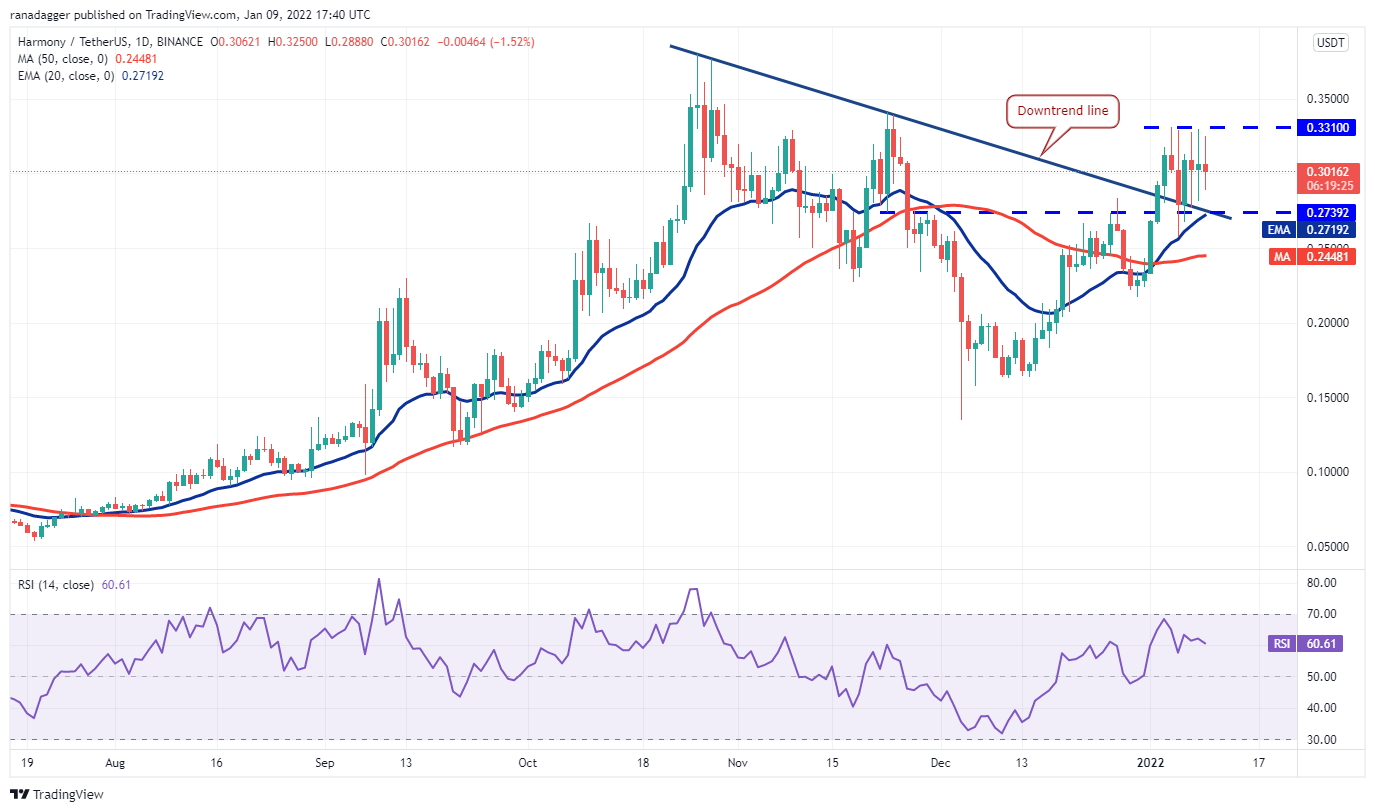 The rising 20-day EMA and the RSI in the positive territory suggest advantage to buyers. If bulls drive the price above $0.33, the up-move could resume. The ONE/USDT pair could then attempt to rise to $0.38.

Contrary to the assumption, if the price breaks below the 20-day EMA, it will suggest that bears have overpowered the bulls. That could pull the pair down to the 50-day SMA ($0.24) and later to $0.21. 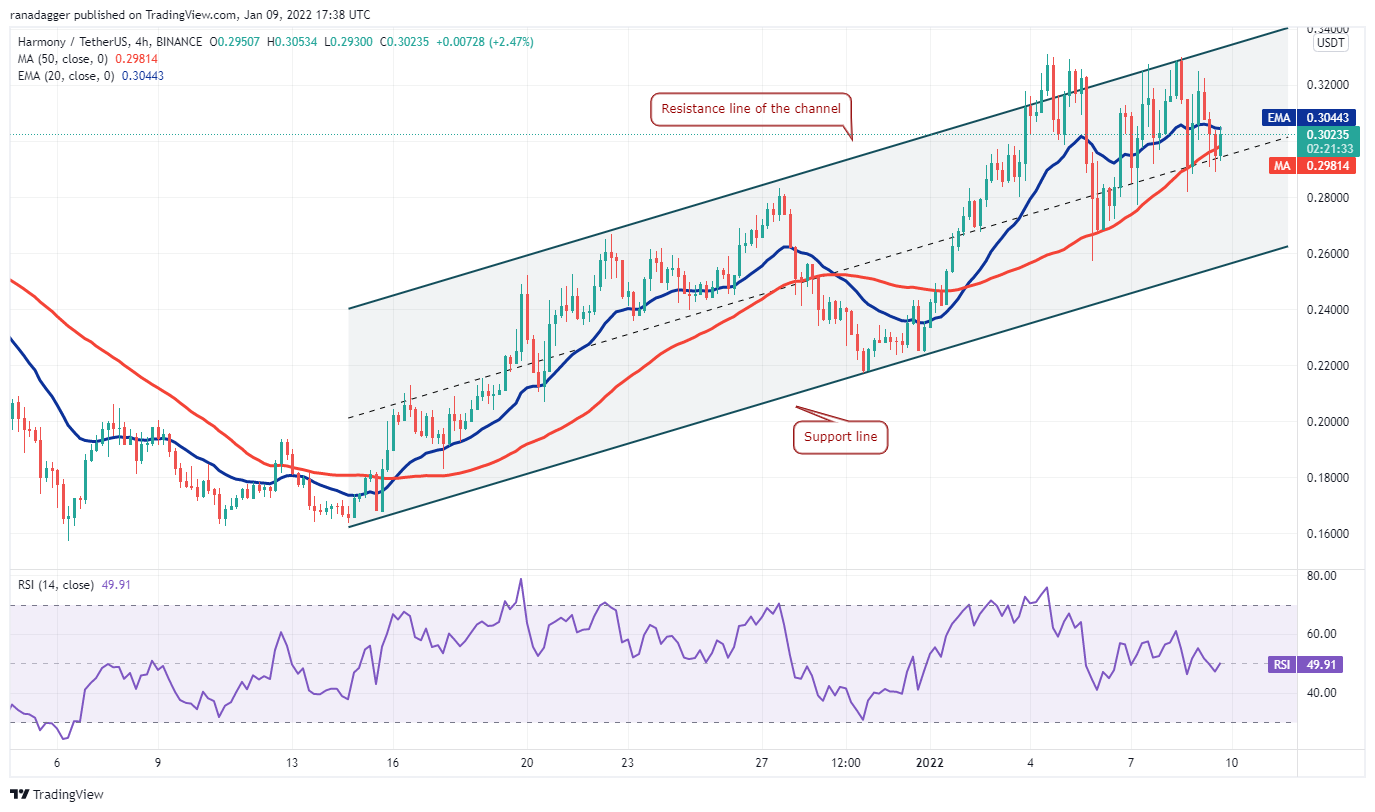 The 4-hour chart has been rising inside an ascending channel pattern. Although bulls pushed the price above the channel, they could not sustain the higher levels. This suggests that bears tried to trap the aggressive bulls.

The price dipped back into the channel but a minor positive is that it bounced off the 50-SMA. This indicates that sentiment remains positive and bulls are buying on dips. 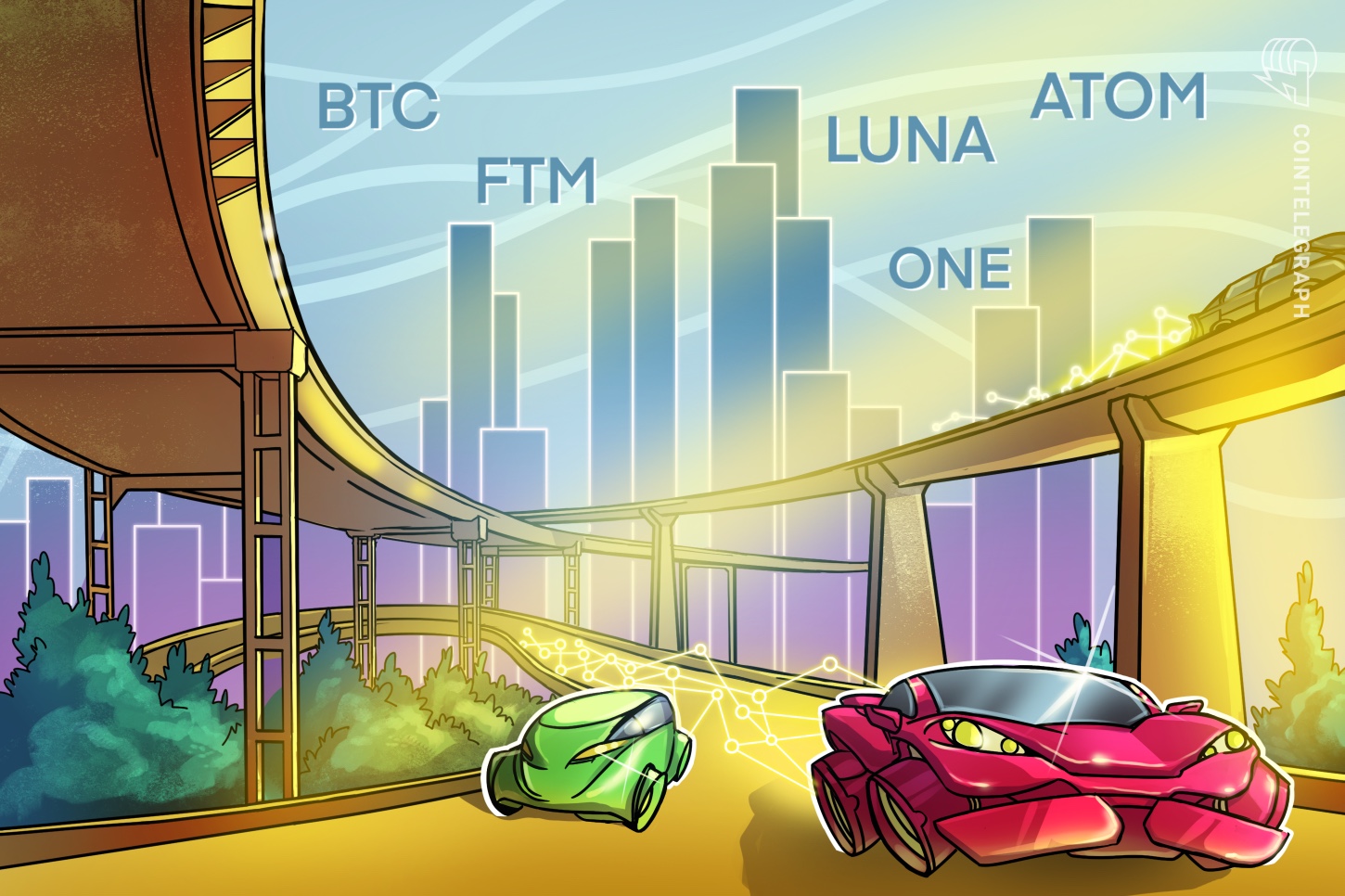 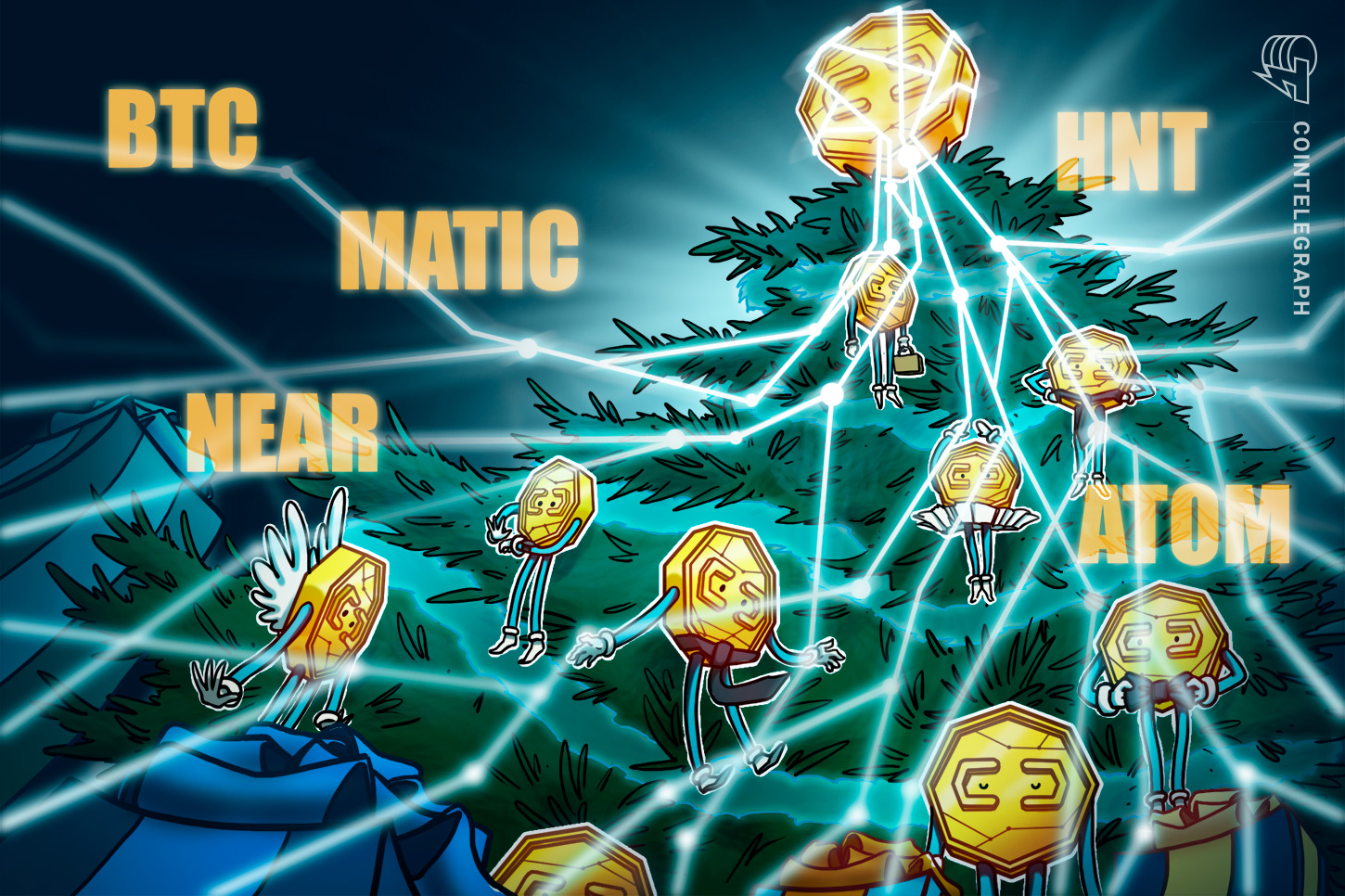