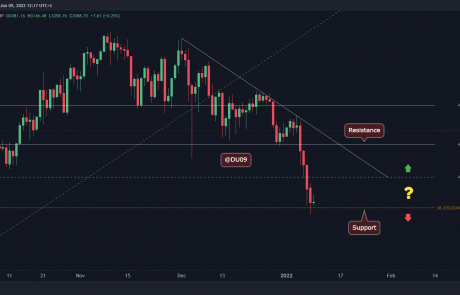 Just as the overall negative sentiment of the crypto markets, ETH had a rough start of 2022, losing over 20% during the first week of the new year.

The past week saw a significant crypto crash where ETH went as low as $2,987 (Bitstamp) on Saturday before recovering above the $3K support level as of today.

At the time of this writing, the price appears to have found a local bottom on top of the $3,000 psychological support, and ETH could see a temp correction towards the key resistance levels, pausing a bit the selloff momentum.

Trading Volume: The selloff volume peaked on Thursday, and since then, the volume has declined, particularly on Saturday.This allowed ETH to finally stop the downtrend Sunday at just above $3,000 (as of now). However, the weekend price action should be taken with a grain of salt since most traders are off, along with the global markets that also affect the overall sentiment.

RSI: The daily RSI has reached the oversold territory and might curve up during a relief rally. This is not bullish yet, since it can be temporarily in case of sellers’ pressure return in the coming week.

MACD: The daily MACD is bearish, and the histogram shows some first signs of decrease in the selloff momentum. If this continues, ETH can attempt a pullback to the $3,300 resistance level.

The bias for ETH is bearish. Watch the Monday price action as that will indicate what will happen next to ETH.

After a bloody week, ETH finally found some support on the $3,000 level. This level must be defended well by buyers; otherwise, it would spell disaster for the altcoin market. Confidence in support levels is low particularly when the price dropped below critical levels last week without any pullback.