Cardano (ADA) Price May Plunge to $0.30 If Fails To Break These Levels ! Here’s Why

After a chaotic conclusion to the cryptocurrency market in 2021, the price of Bitcoin plummeted in a crypto flash crash in early January. The ongoing bitcoin market crisis is showing no signs of slowing down, as more and more coins are being liquidated.

At the time of writing, Bitcoin is trying to stay above $40,000. Ether has also shrunk dramatically, losing roughly 7% of its value in the last 24 hours. Cardano, Solana, and XRP are among the cryptocurrencies in the red, with BNB down 5%.

New ATH Or Major Crash ? What’s Next for ADA?

Cardano’s (ADA) price could recover and hit new all-time highs in the next months, according to the host of popular crypto channel Coin Bureau. ADA soared to an all-time high of $3.10 in early September, but has subsequently had a 59 percent market correction.

Guy, a pseudonymous analyst at Coin Bureau, tells his 1.84 million YouTube fans in a recent video that there are several reasons to remain bullish about Cardano.

The good news according to the analyst is that many institutional funds, such as Grayscale’s Digital Large Cap Fund, have exposure to ADA, and it appears that a few of these funds have been accumulating ADA over the previous few months.

Many Cardano DApps [decentralised applications] are also set to launch in the next months, which will likely generate the demand that ADA requires to surpass its previous high.

Finally, ADA’s long-term technicals predict it could surge as high as $4 in the next few months if it can break above the $1.70 price resistance zone.”

If ADA fails to break through $1.70, Guy believes it will create a head-and-shoulder pattern, a price structure that indicates a trend reversal. According to the analyst, such a reversal might send ADA back to lows below $0.30 in 2020.

“I highly doubt this will happen though because Cardano has lots of upcoming milestones which could easily take ADA to new all-time highs.“

Cardano Breaks Down Again, ADA Price May Slide Down to $1 Following the Downtrend! 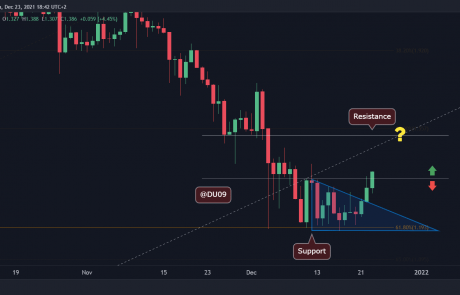 Cardano Price Analysis: ADA Breaks Above $1.3, Here’s the Next Target