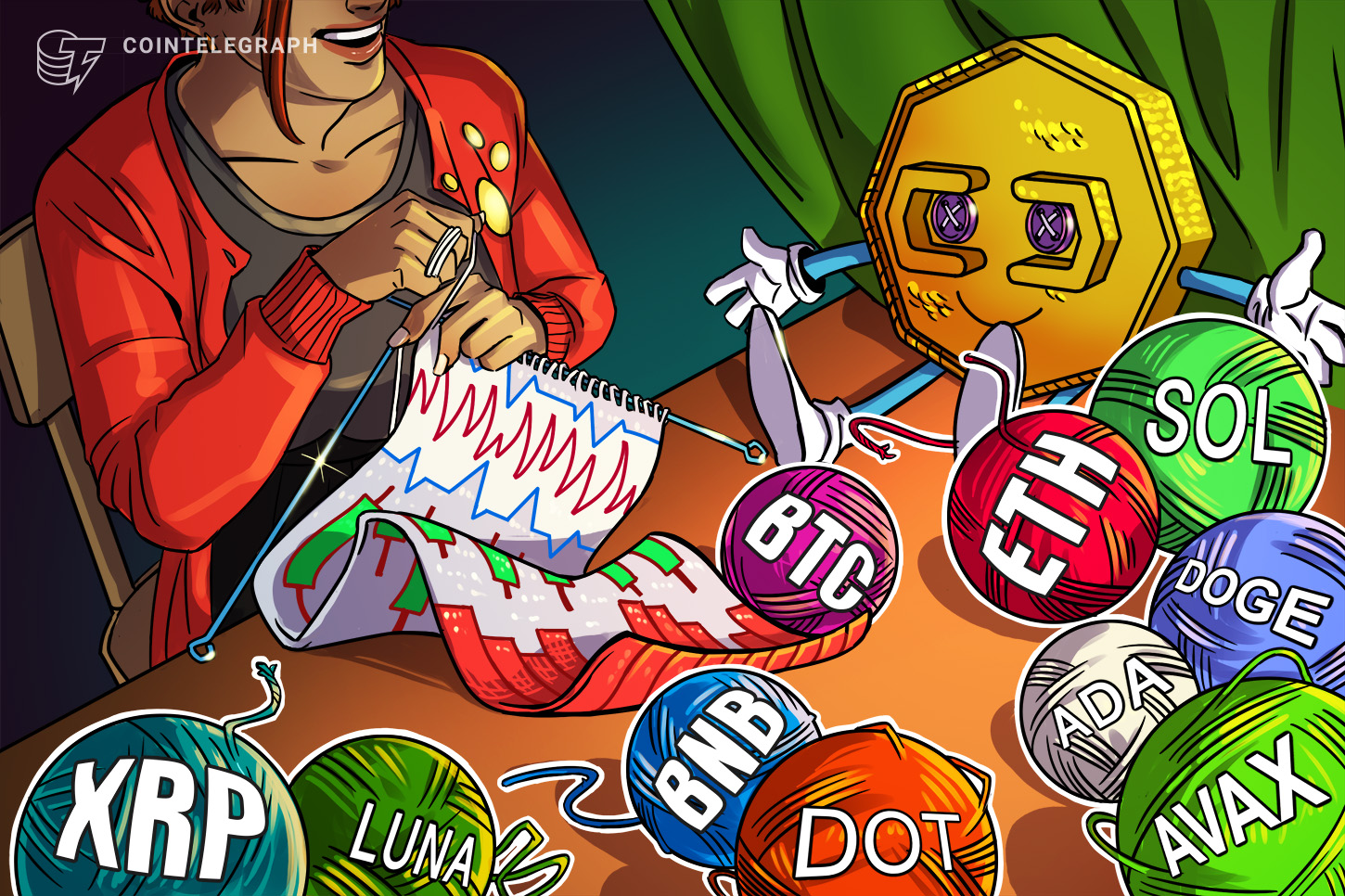 Bitcoin (BTC) and the U.S. equity markets fell sharply on Jan. 5, reacting negatively to the minutes from the Federal Reserve's December FOMC meeting, which showed that the members expect the balance sheet reduction to start after the Fed begins hiking interest rates in early 2022.

Adding to the negative sentiment was the shutdown of the world’s second-biggest Bitcoin mining hub in Kazakhstan, where the internet has been shut down following massive protests by citizens. This caused a dip of about 13.4% in the Bitcoin network’s overall hash rate from 205,000 petahash per second (PH/s) to 177,330 PH/s. 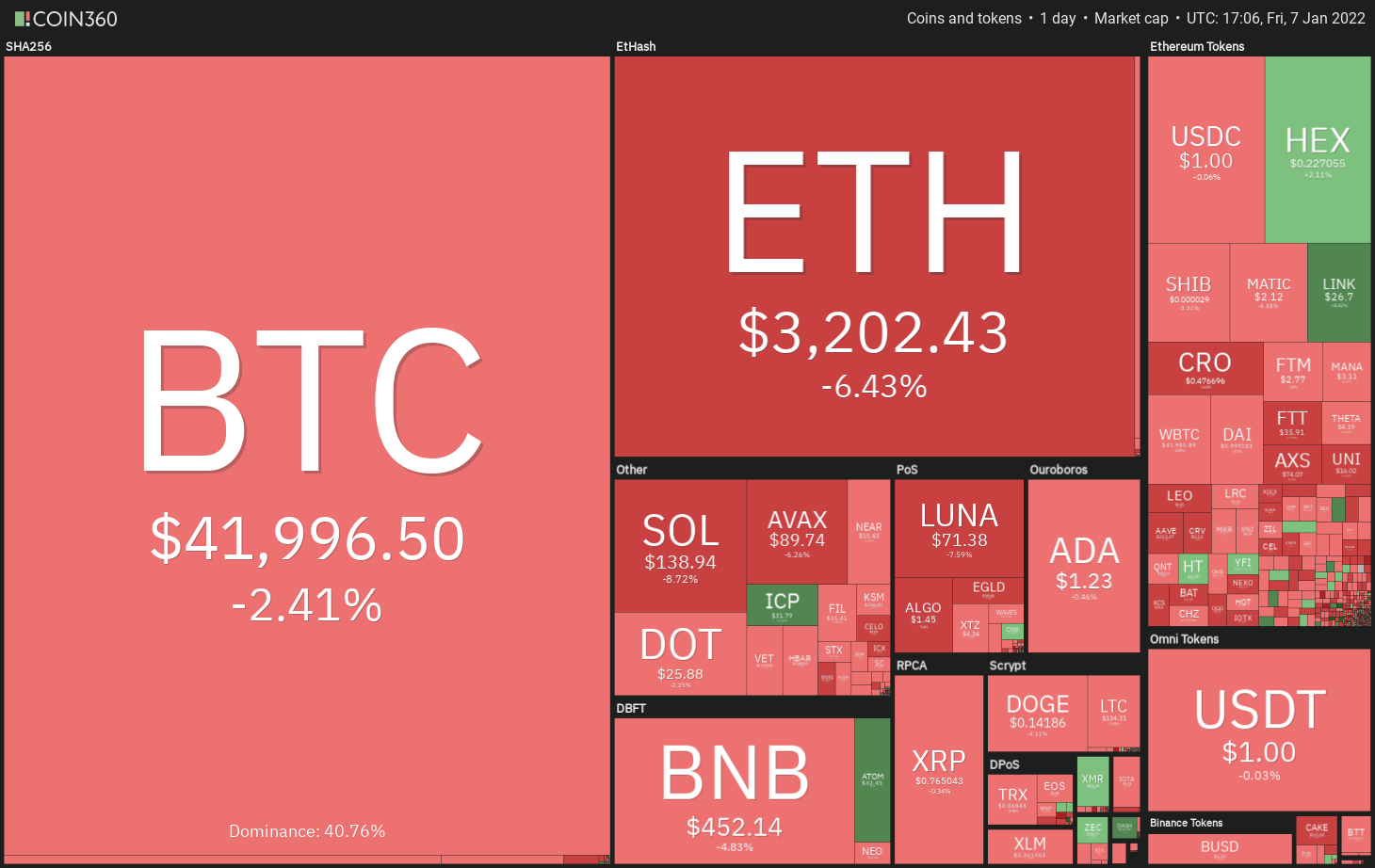 According to Galaxy Digital Holdings CEO Mike Novogratz, the current decline was with low volumes and he believes that the markets will be volatile in the next few days. Novogratz suggests that a huge amount of “institutional demand” was waiting on the sidelines and he expects Bitcoin to bottom out in the $38,000 to $40,000 zone.

Could Bitcoin and major altcoins continue to face selling or will they bounce off strong support levels? Let’s study the charts of the top-10 cryptocurrencies to find out.

The range-bound action in Bitcoin resolved to the downside on Jan. 5 when bears pulled the price below the strong support at $45,456. This suggests that supply exceeds demand. 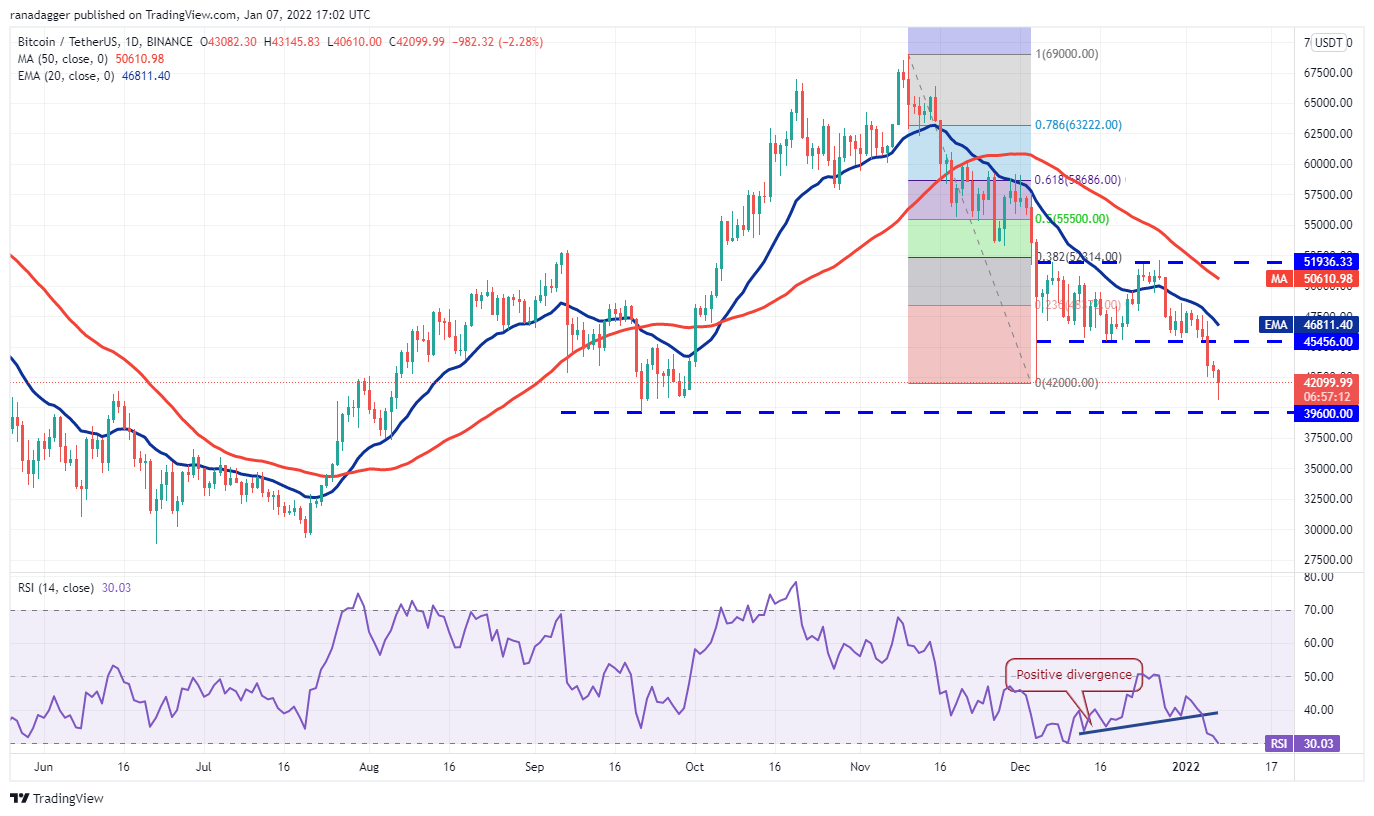 There was a meek attempt to defend the $42,500 support on Jan. 6 but sustained selling has pulled the price close to the next support at $39,600. This leg down has invalidated the positive divergence that was forming on the relative strength index (RSI).

The downsloping moving averages and the RSI near the oversold zone suggest that bears are in control. If bears sink and sustain the price below $39,600, the BTC/USDT pair could nosedive to $30,000.

On the contrary, if the price rebounds off $39,600, the bulls will again try to push the pair above the 20-day exponential moving average ($46,811). Such a move will be the first indication that the downtrend could be ending.

The bullish momentum could pick up on a break and close above the 50-day simple moving average ($50,610). 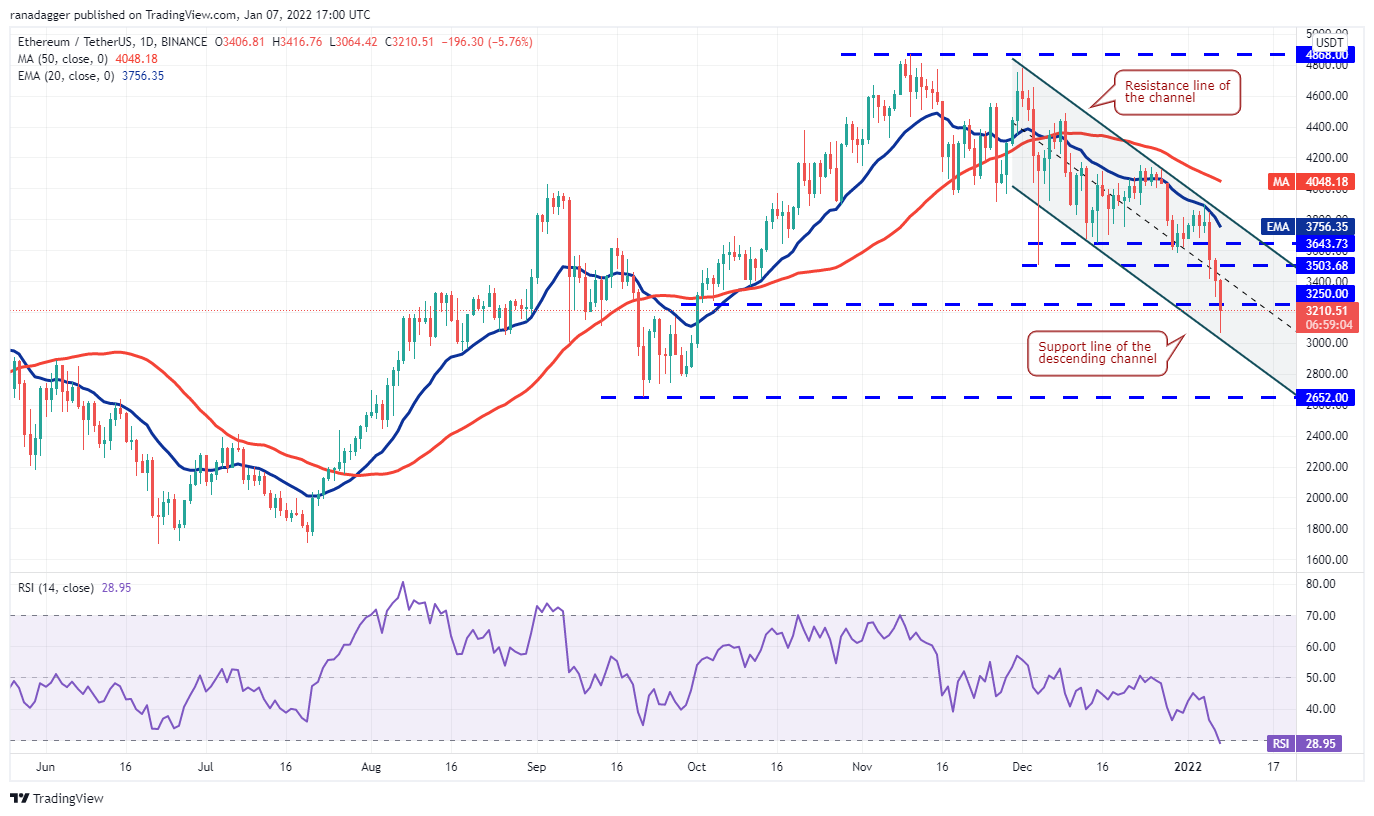 The downsloping moving averages and the RSI in the oversold zone suggest that bears are in command. If bears sustain the price below $3,250, the decline could extend to the support line of the channel.

The bulls will attempt to defend this level and push the price to the resistance line of the channel. A break and close above the channel will signal a change in trend.

Alternatively, if bears sink the price below the channel, the ETH/USDT pair could decline to the strong support at $2,652.

Binance Coin (BNB) broke below the strong psychological support at $500 on Jan. 5. Follow-up selling has pulled the price to the next support at $435.30. 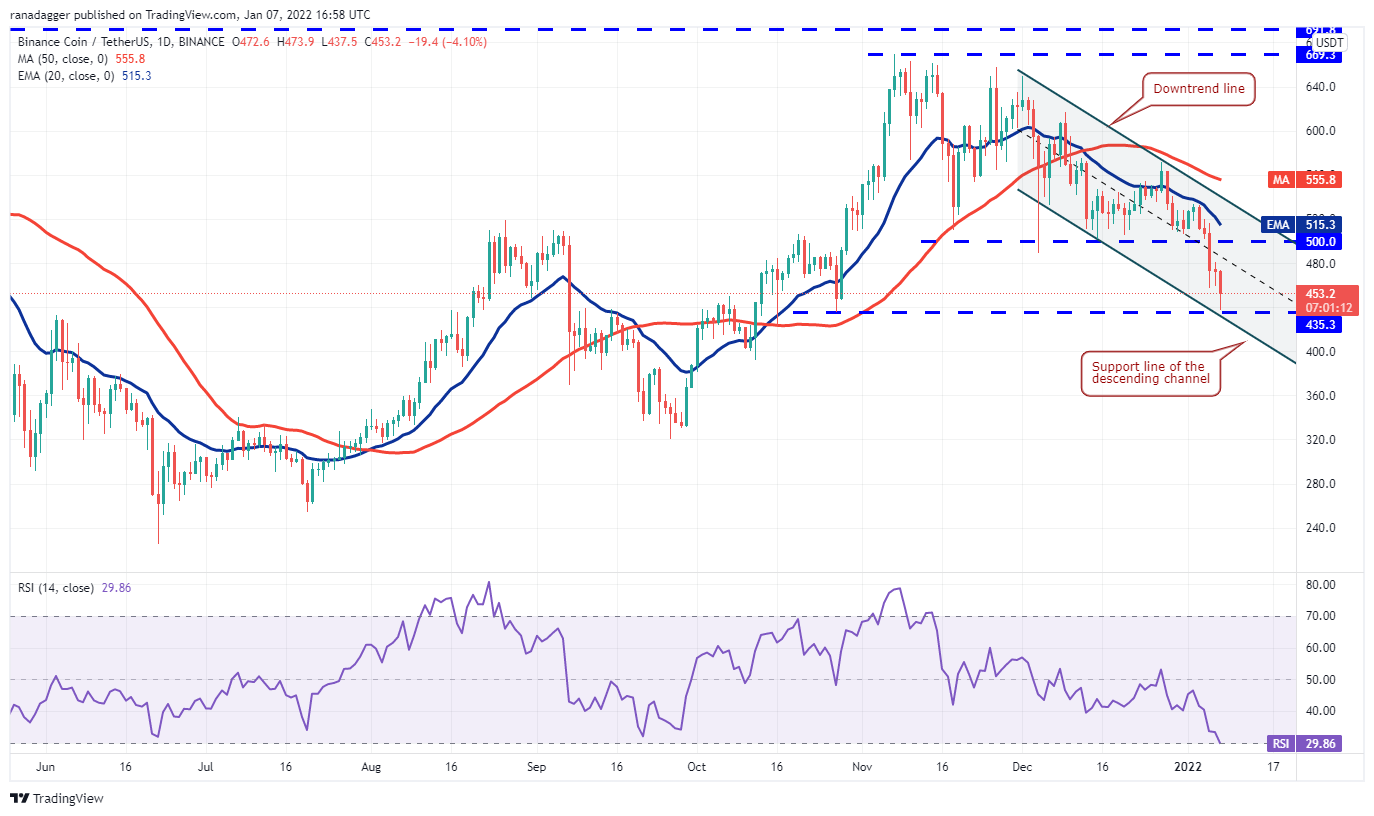 If the price bounces off the current level, the BNB/USDT pair could rally to $500 where the bears are likely to mount a stiff resistance. The downsloping moving averages and the RSI in the oversold zone suggest that bears are in control.

If the $435.30 support gives way, the pair could extend its decline to $392.20 and later to $320. This negative view will be negated if the price breaks and sustains above the channel. Such a move could open the doors for a possible move to $575. 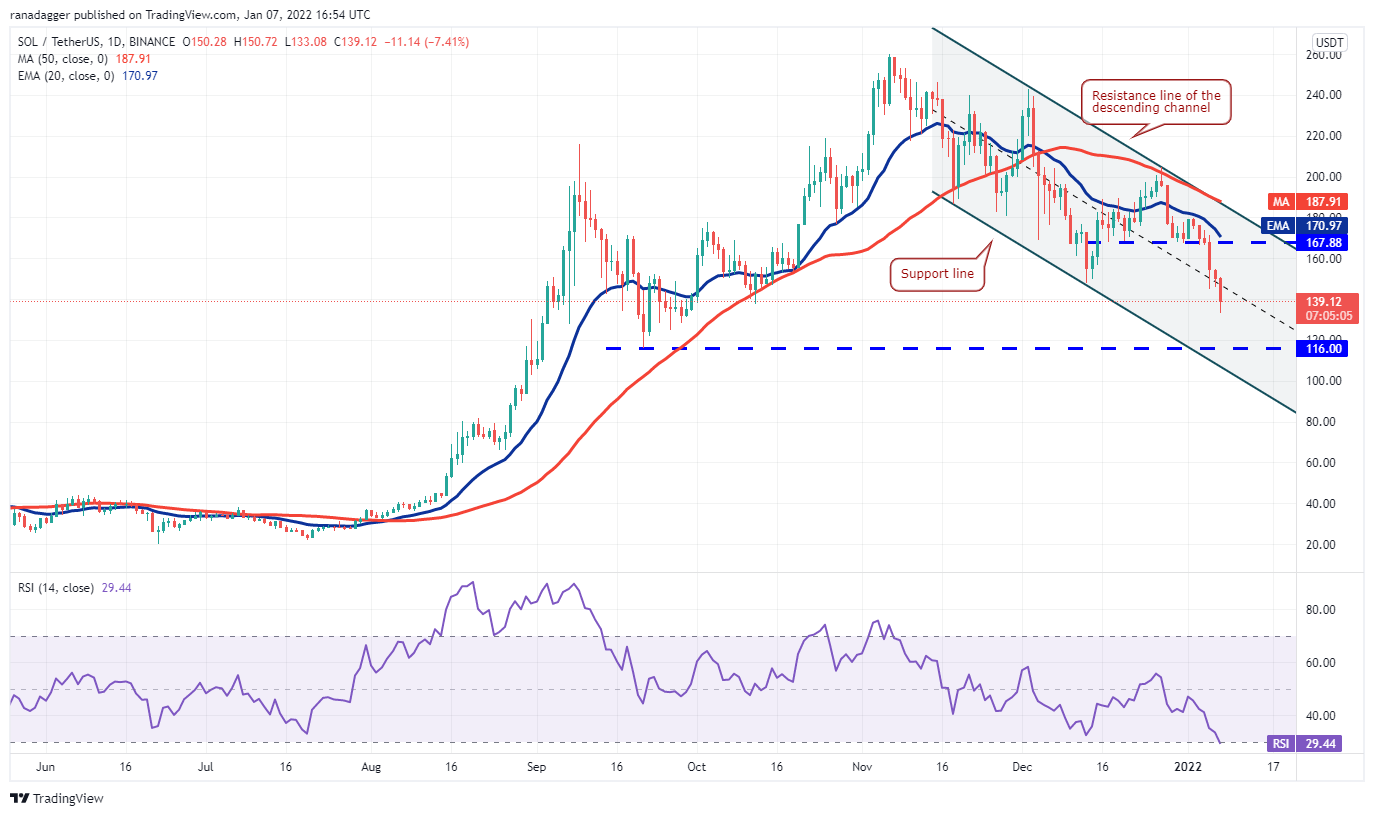 The selling has continued and the bears will now try to pull the SOL/USDT pair to the strong support at $116. This level could attract strong buying from the bulls but the relief rally is likely to face selling near the 20-day EMA ($170).

Such a move will indicate that the sentiment remains negative and traders are selling on rallies. That could increase the likelihood of a break below $116. The next stop may be the support line of the channel.

The buyers will have to push and sustain the pair above the resistance line of the channel to signal that the downtrend could be ending.

Cardano (ADA) turned down from the 20-day EMA ($1.33) on Jan. 5 and dropped to the strong support at $1.18. The bulls have successfully defended this level but have failed to push the price above the 20-day EMA. 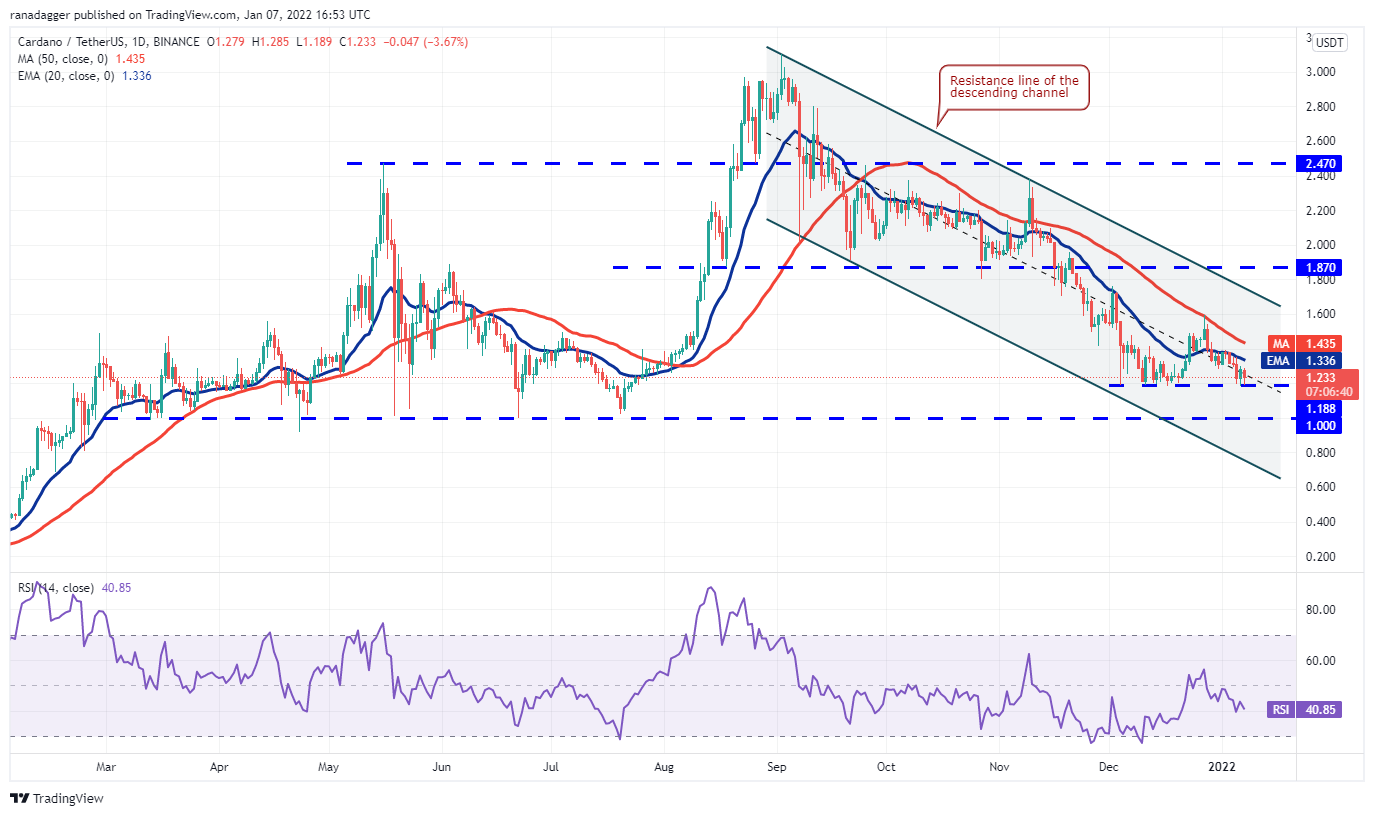 If bears pull the price below $1.18, the ADA/USDT pair could drop to the critical support at $1. This is an important support to watch out for because if it cracks, the selling momentum could pick up and the pair could slide to $0.68.

On the contrary, if bulls drive the price above the moving averages, the pair could rise to the resistance line of the channel. A break and close above the channel will signal a possible change in trend. The pair could then rally to $1.87.

XRP broke below the $0.75 support on Jan. 5 but the long tail on the candlestick suggests that bulls purchased this dip. However, a minor negative is that the buyers have not been able to build upon the rebound. 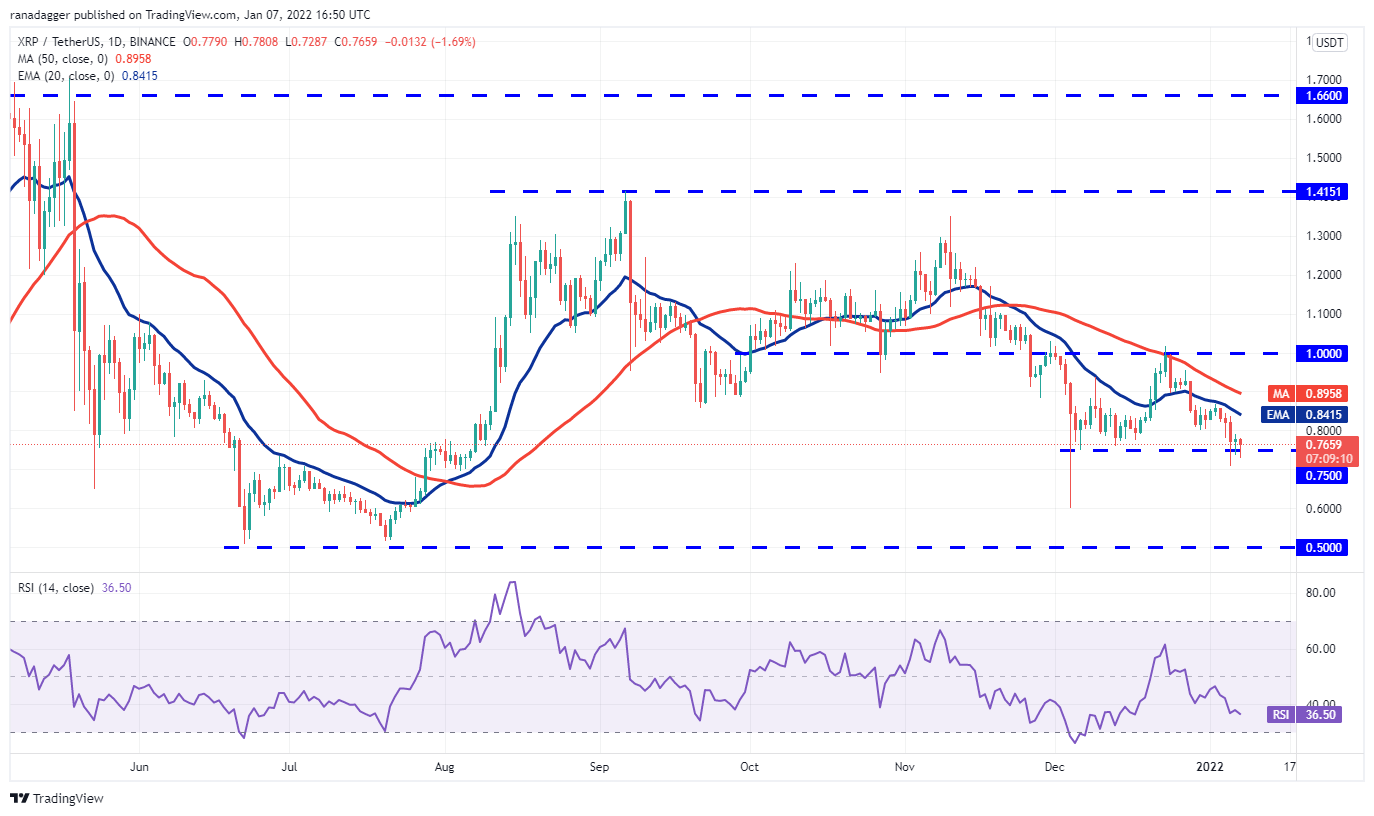 The XRP/USDT pair formed a Doji candlestick pattern on Jan. 8 and the bulls are currently attempting to sink the price below $0.75. If that happens, the downtrend could resume and the pair may drop to $0.60.

The downsloping moving averages and the RSI in the negative zone indicate that bears are in command. Contrary to this assumption, if the price rebounds off the current level, the bulls will attempt to push the pair above the moving averages.

If they succeed, it will suggest that the selling pressure may be reducing. The pair could then rise to $1.

Terra’s LUNA token plummeted below the 20-day EMA ($81) on Jan. 5, indicating that short-term traders may have booked profits after bulls failed to clear the hurdle at $93.81. 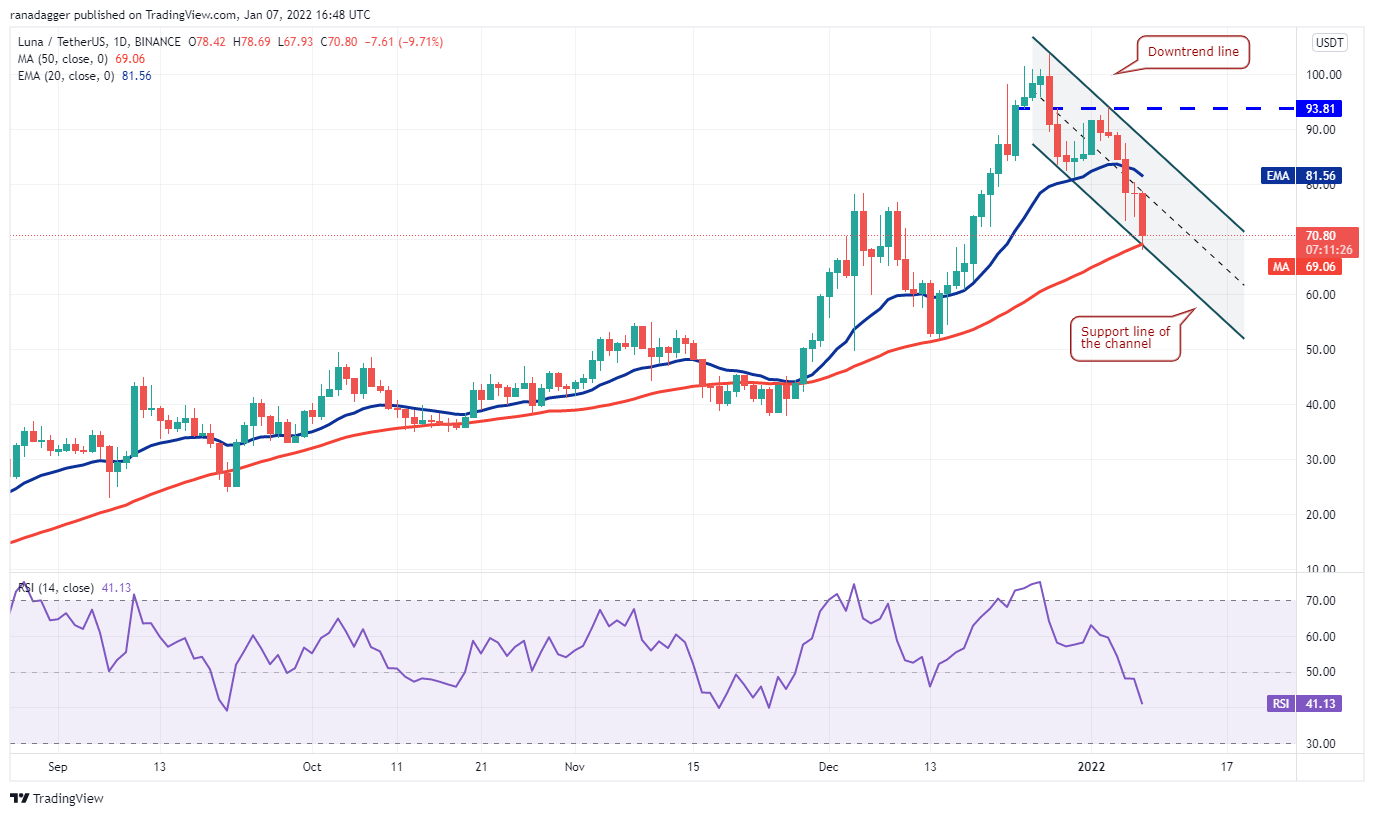 The bears have pulled the price to the 50-day SMA ($69), which may act as a strong support. If the price rebounds off the current level, the bulls will try to push the LUNA/USDT pair to the downtrend line of the descending channel.

A break and close above the channel will indicate that the correction may be over. The bulls will then try to push the price to $93.81. On the contrary, a break and close below the 50-day SMA could intensify selling and the pair may drop to the psychological support at $50.

Polkadot (DOT) is range-bound in a downtrend. The price has been oscillating between $22.66 and $32.78 for the past few days. 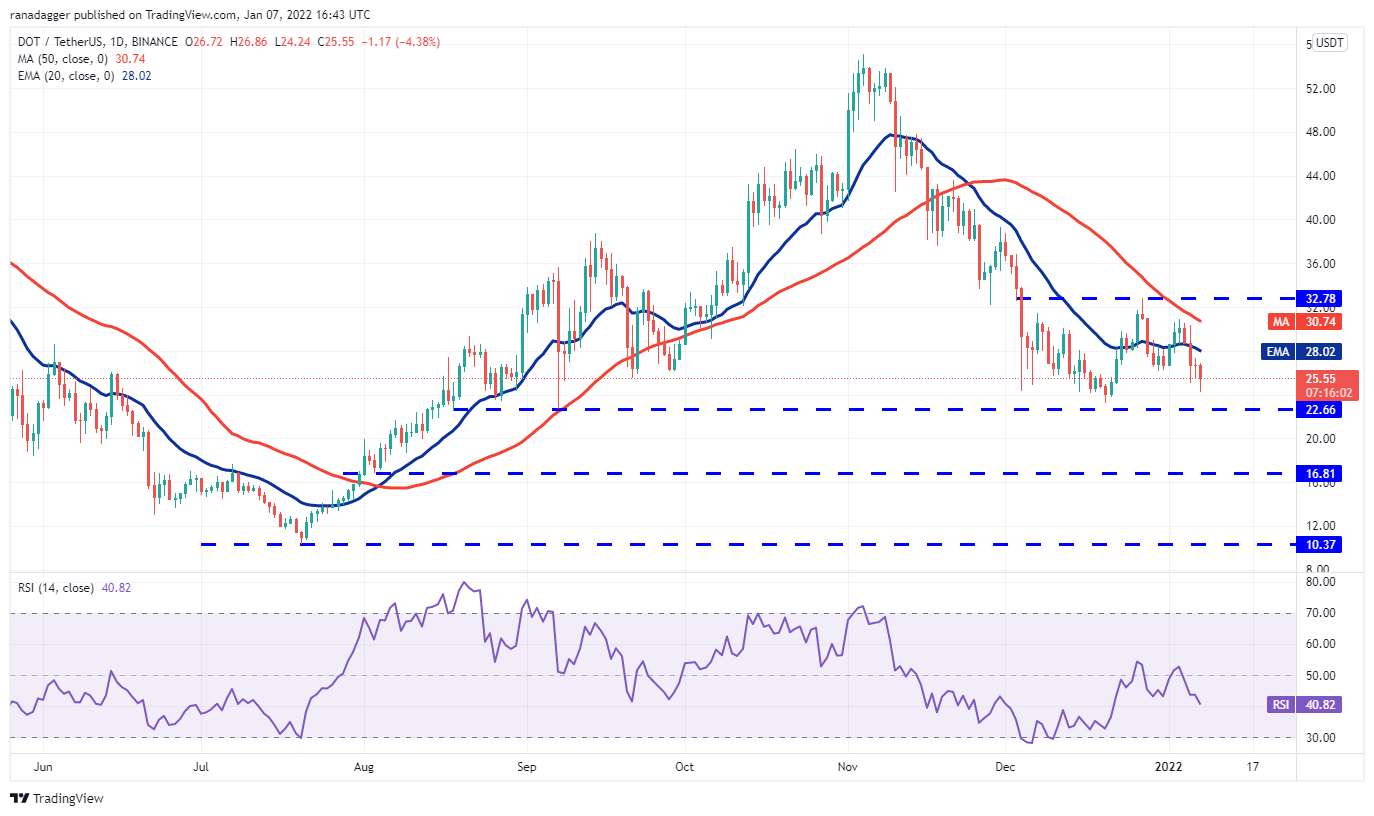 The 20-day EMA ($28) has started to turn down and the RSI has dipped into the negative territory, suggesting that bears have the upper hand. If sellers sink and sustain the price below $22.66, the DOT/USDT pair could plunge to $16.81.

Contrary to this assumption, if the price rebounds off $22.66, the bulls will try to push the pair to $32.78. A break and close above this level could signal a possible change in trend. The pair could first rise to $40 and later to $44.

Avalanche (AVAX) broke below the $98 support on Jan. 5 and has dropped to the uptrend line of the symmetrical triangle today. The bulls will attempt to defend this level and push the price back to the downtrend line. 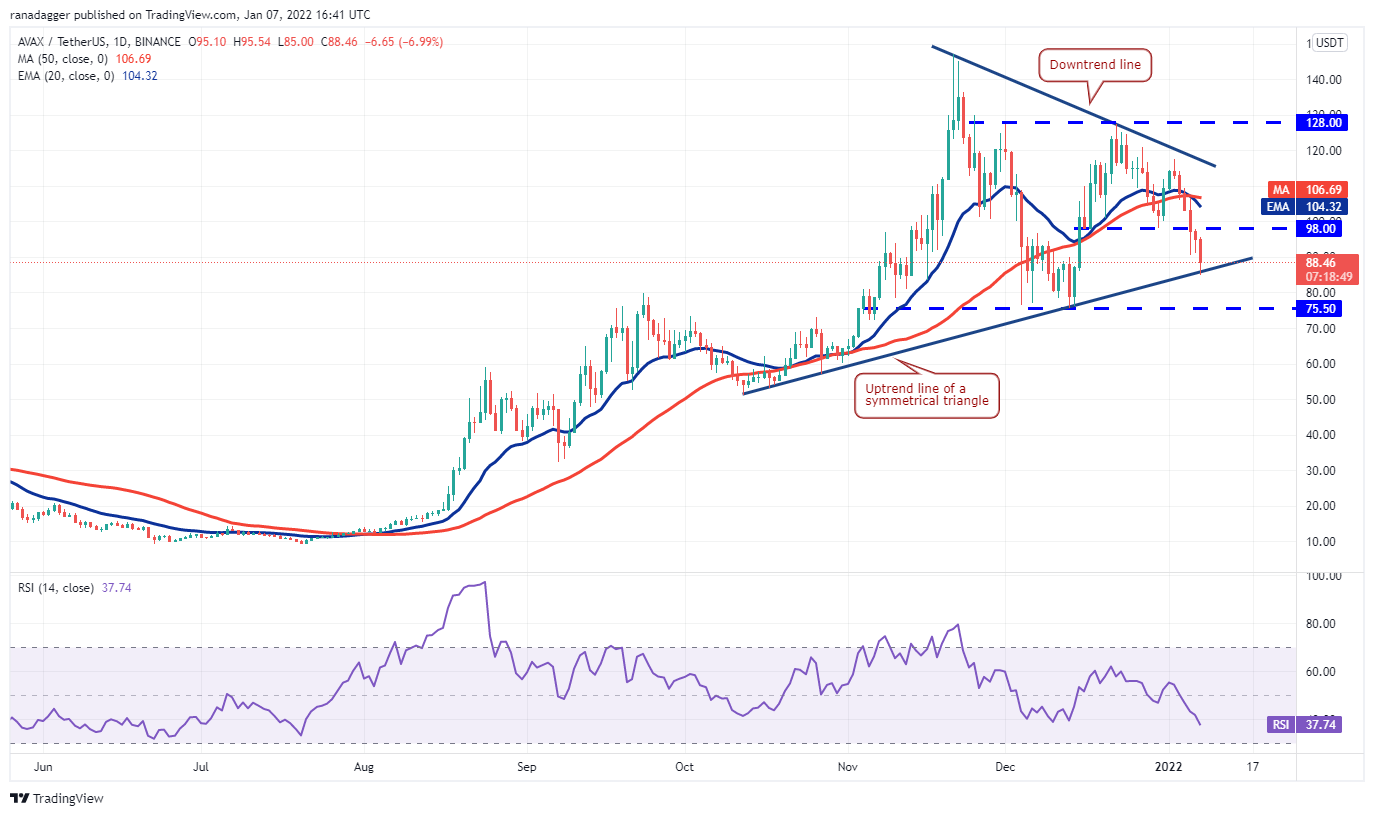 The 20-day EMA ($104) has turned down and the RSI is below 38, indicating that rallies are likely to be sold into. If the bounce off the current level turns down either from $98 or from the 20-day EMA, the possibility of a break below the triangle increases.

The AVAX/USDT pair could then decline to the $75.50 support where the bulls will try to arrest the decline. This negative view will invalidate if the price turns up and breaks above the triangle. The pair could then rise to $128.

Dogecoin (DOGE) dipped below the $0.15 support on Jan. 5 but the long tail on the candlestick shows that bulls defended this level. That was followed by a Doji candlestick pattern on Jan. 6, indicating indecision among the bulls and the bears. 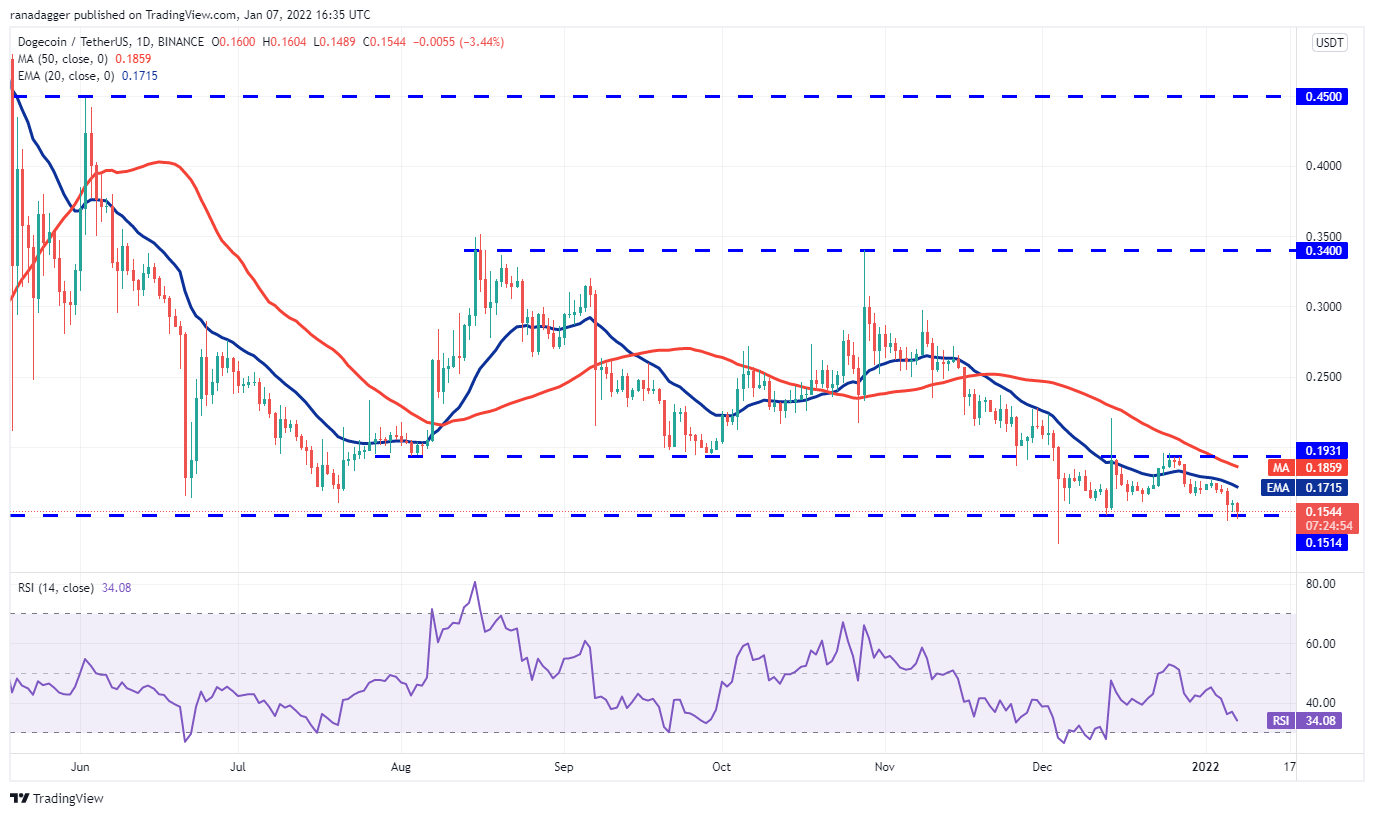 The bears tried to resolve the uncertainty to the downside today but the bulls are not willing to relent. However, unless buyers quickly push the DOGE/USDT pair above the 20-day EMA ($0.17), the risk of a break and close below $0.15 increases.

If that happens, the pair could slide to $0.13 and then to $0.10. Alternatively, if bulls push the price above the 20-day EMA, it will suggest that buyers are attempting a comeback. The pair could then rise to $0.19 and if bulls clear this hurdle, the rally may extend to $0.22. 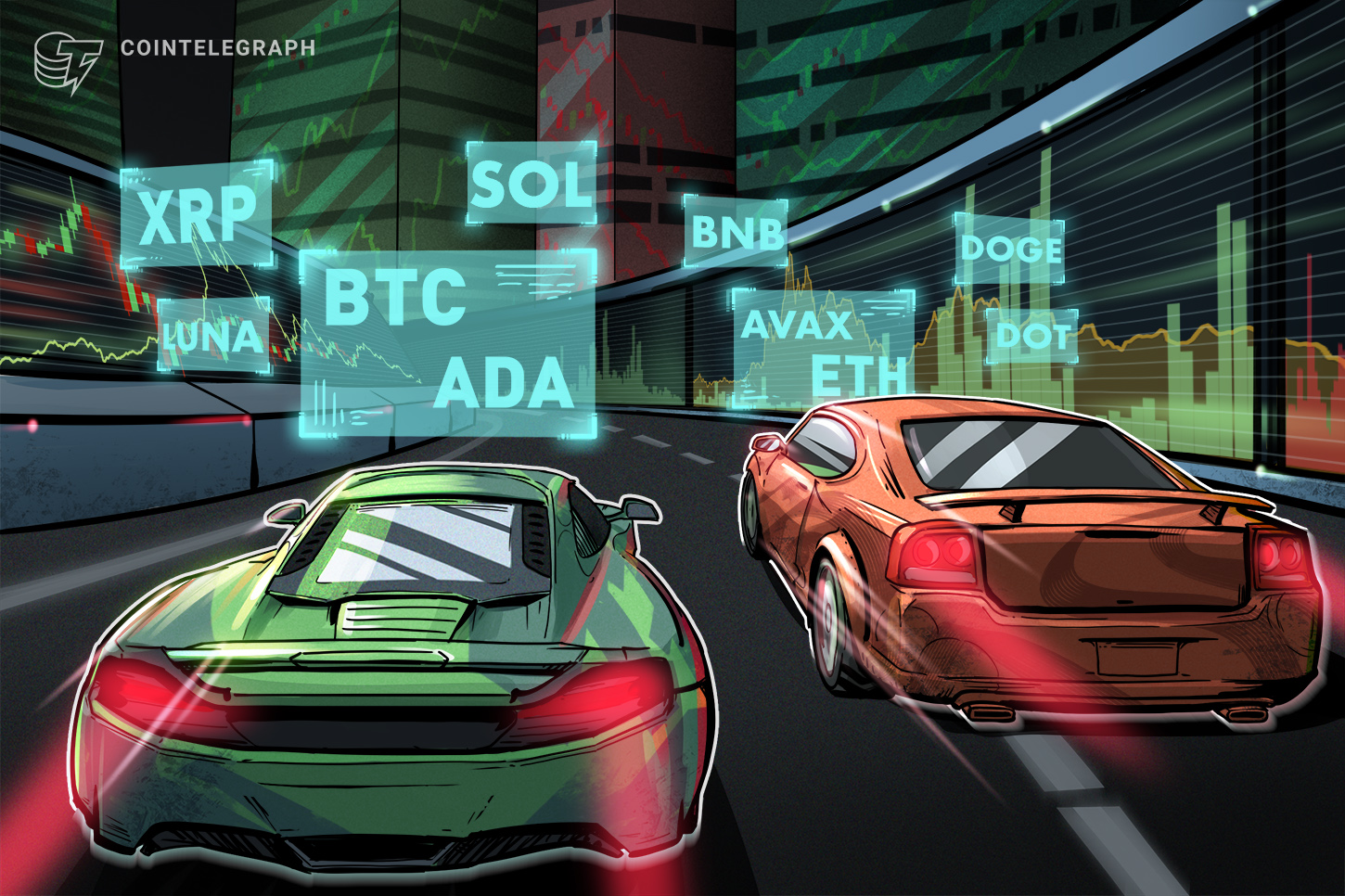 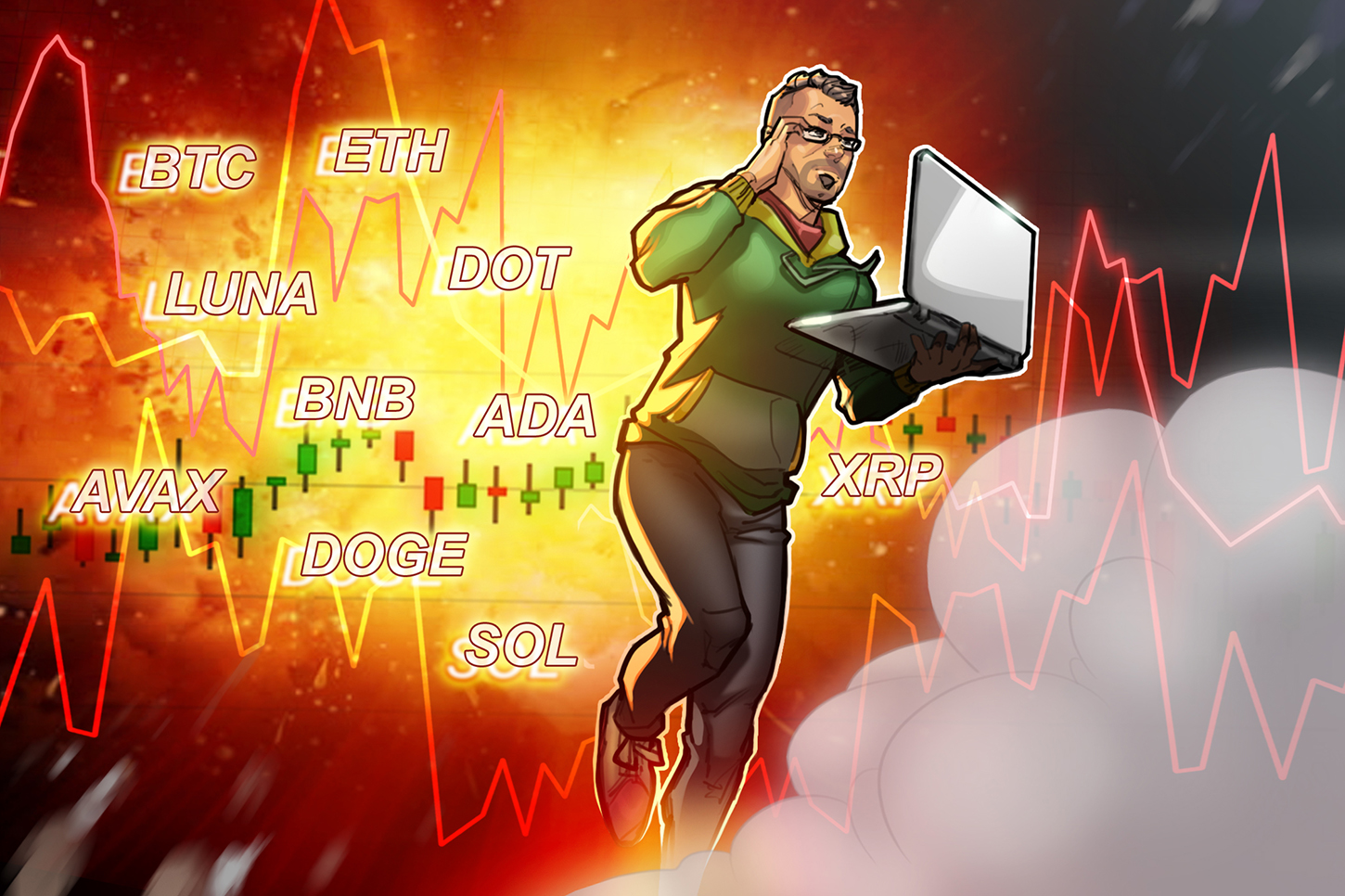 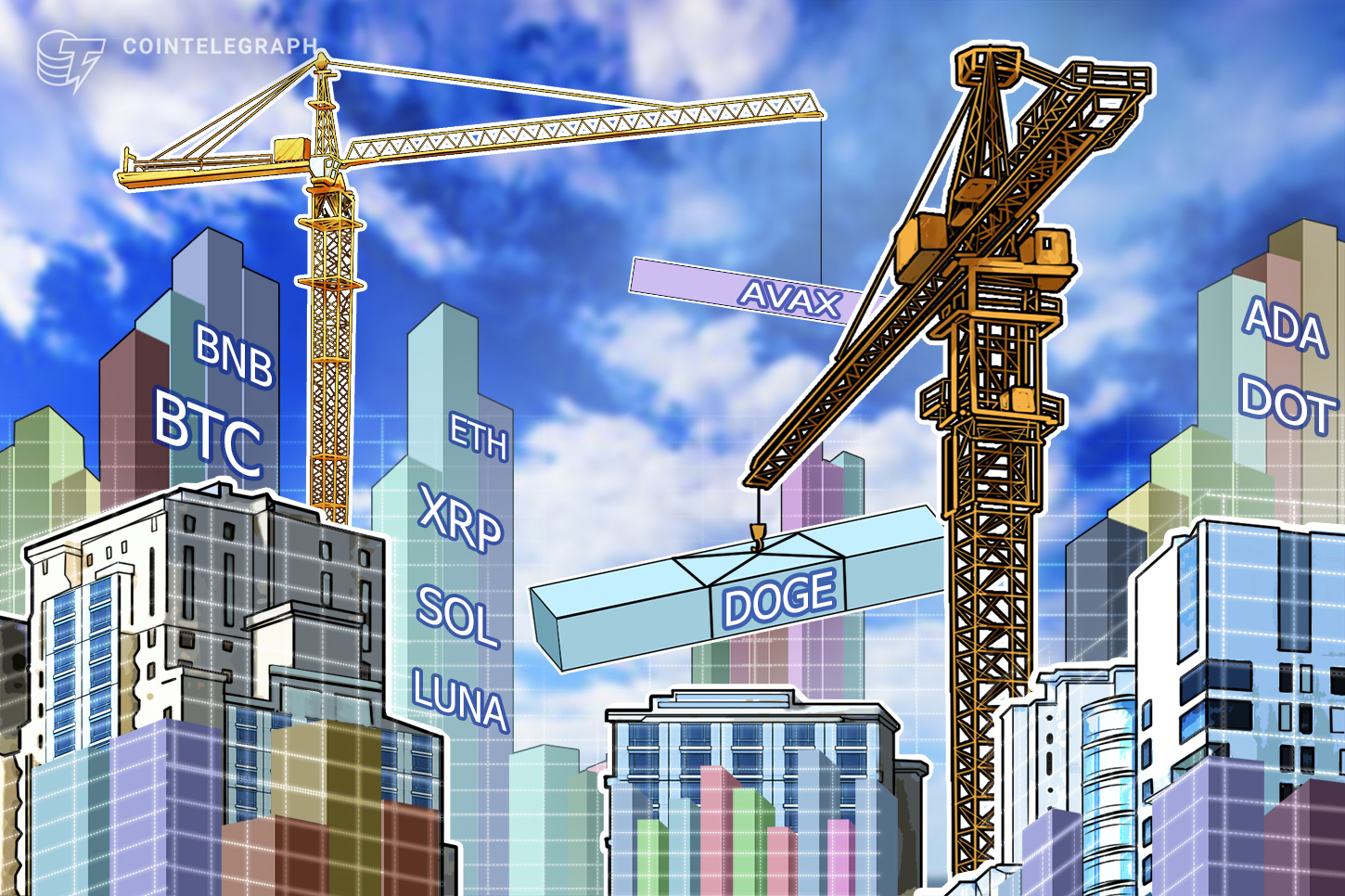