The combined bitcoin and cryptocurrency market has lost around $1 trillion since November in a crypto price crash that's caused turmoil for traders.

The bitcoin price has crashed from a peak of almost $70,000 per bitcoin less than two months ago to lows of just over $40,000 today—a decline of around 40%. Meanwhile, other major cryptocurrencies ethereum, Binance's BNB, solana, cardano and XRP have all lost a similar amount.

The crypto market's decline from $3 trillion to $2 trillion, as measured by CoinMarketCap, comes after a period of huge growth for cryptocurrency prices that saw the market swell from just $200 billion two years ago—and bullish traders are convinced this is only a temporary setback.

"Although sharp, the most recent pullback in the digital asset market was by no means unexpected," Mikkel Morch, executive director of risk management at crypto hedge fund ARK36, said in emailed comments. "Previously, we warned that uncertainty in the markets and weak technical fundamentals made a drop to low $40,000 levels entirely possible."

"[Bitcoin has] broken its recent stock market correlation, missing out on the end of 2021/start of 2022 equity rally," Nicholas Cawley, strategist at DailyFX, said via email. "Looking ahead, if bitcoin makes a confirmed break below the December 4 low around $42,000, then a cluster of late-September lows between $39,600 and $40,700 come into play."

The latest crypto price crash, wiping billions of dollars from the bitcoin and crypto market in a matter of hours, came after it was revealed the U.S. Federal Reserve could accelerate its planned 2022 interest rate hikes and begin shrinking its massive balance sheet—something that weighed on equity markets as well.

"After the release of the Fed’s December meeting minutes, hinting at a more decisive move to scale back its expansionary monetary policy to tackle inflation, negative investor sentiment caused bitcoin to lose the key $46,000 level," said Morch. "Once that support was breached, liquidations followed within minutes. For a few weeks now, we’ve been clearly in a downtrend and there are no signs of a decisive reversal in sight."

The crypto price crash comes some six months after the bitcoin price was hard hit by a China crypto crackdown and confidence was knocked by Tesla chief executive Elon Musk appearing to sour on bitcoin. The bitcoin price hit a low of $29,000 in late July before rebounding and recovering to above its previous high.

There are "striking similarities between the current price action and the market moves between mid-May and August do give reasons for cautious optimism in the medium term," said Morch. "A bounce to around $47,000 in the next few days could corroborate that thesis while further losses would largely invalidate it. In any case, only a clear break above $50,000 would signal a major reversal in the trend and investors should keep in mind the inherently volatile nature of the digital asset market." 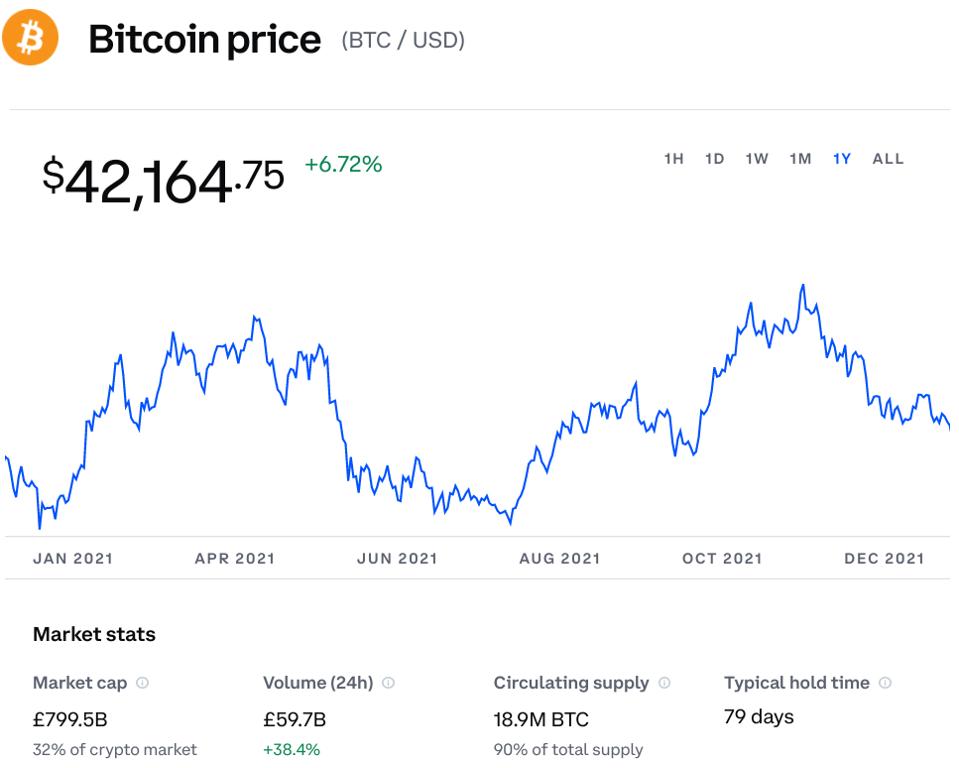 Other bitcoin and cryptocurrency investors aren't concerned by the recent downturn, confidently predicting a "robust rebound" in prices.

The Fed caused a "knee-jerk sell-off on Wall Street and the crypto market as it is perceived by some traders that such a move puts at risk the liquidity that has benefitted many asset classes, including bitcoin," Nigel Green, chief executive of the financial advisory and asset management deVere Group, said in emailed comments.

"However, I believe that we will see bitcoin robustly rebound as the dust settles. This will then boost others in the crypto market"—such as ethereum, Binance's BNB, solana, cardano and XRP—"because bitcoin and other digital currencies are widely regarded as a shield against inflation."

Over the last year, the likes of ethereum and its biggest rivals Binance's BNB, solana and cardano have outperformed the bitcoin price. The ethereum price has risen 165% over the last year despite the recent crypto price crash. Solana, now the fifth-largest cryptocurrency by value, is up a blistering 6,500% on this January 2021.

"Bitcoin has underperformed not only the crypto-space over the last few weeks, with a raft of altcoins ... recording hefty gains," said DailyFX's Nicholas Cawley. "Bitcoin’s market dominance is now just under 40% compared to a level of just under 70% this time last year."

While many bitcoin and crypto investors are confident that bitcoin and the wider crypto market will rebound, others see continued extreme volatility on crypto markets as a problem that needs to be resolved.

"Whatever the merits of cryptocurrency such wild swings would preclude it from supplanting traditional currencies any time soon," AJ Bell investment director Russ Mould said via email.

Bitcoin Is Braced For A $6 Billion Earthquake As A Crypto Price Crash Hits Ethereum, BNB, Solana, Cardano And XRP