The Bitcoin price for the past long time is hovering between a very narrow range of $45K to $50K. Every attempt of the asset to sustain above $50K is going in vain but also the asset recovers instantly if it falls below $45K. Therefore, considering the current consolidation, many believe the BTC price may undergo a huge parabolic curve to hit its ATH in Q1 2022. But the technicals and the patterns suggest this may take yet some more time than expected. 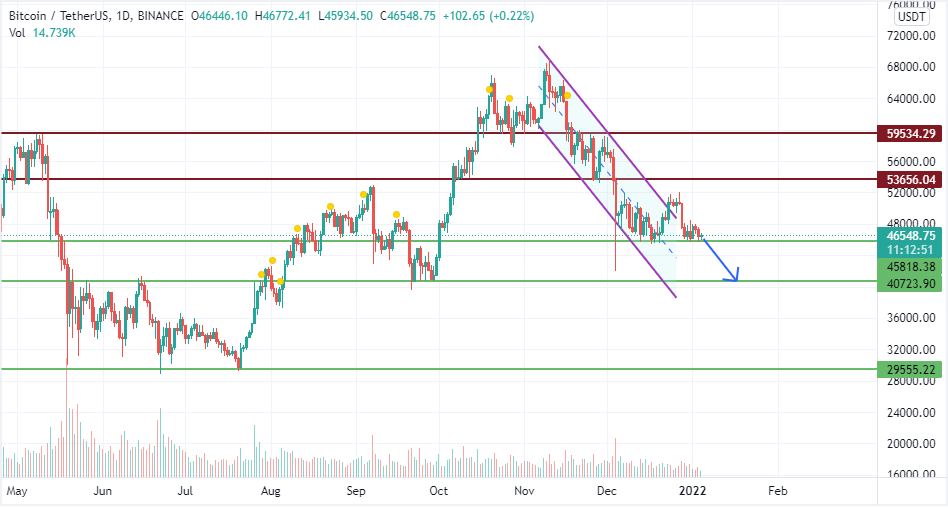 The above chart showcases that the BTC price always retests whenever it hits one of the pivot levels. However, since the beginning of November 2021, the asset began to trend within a descending channel. No doubt it broke out of the channel yet failed to maintain with the uptrend and slid back towards the local support level. Currently, the price is testing these levels, the pressure remains on the downside without any buying power. And hence a breakdown is very possible at this moment.

Altcoins to Decouple from Bitcoin Soon!

Usually, Bitcoin is known to be the ‘King’ of all cryptocurrencies. Ever since the very first Altcoin was created and set for trade, BTC’s dominance remained relatively high. And since then the altcoins tend to follow the Bitcoin price movements. But since Q4 2021, the scenario has changed a little, as altcoins showcase an independent trend that is not impacted by the BTC price.

The biggest examples were the web3 or the Metaverse tokens which boomed while Bitcoin maintained a silent trend. No doubt the first choice for any investment still remains Bitcoin, but this asset does not get 10x to 100x returns in a short time. And as the NFT’s or DeFi’s have the capacity to do so, the newbies may get attracted towards the altcoins rather than bitcoin.

Moreover, the current month is speculated to be more on accumulation and next month, February is said to be extremely bullish for most of the Altcoins. And hence while Bitcoin(BTC) price may attain a silent trend, Altcoin may thrive in the crypto space in the first half of 2022.