CRV, the governance token of decentralized exchange (DEX) Curve.Fi, is extending its five-month winning streak as the battle between DeFi protocols for control leads to a demand-supply imbalance.

As of Tuesday, about 86% of the token’s $3 billion supply is locked up in various DeFi, or decentralized finance, protocols, according to CoinMarketCap. The declining liquidity could be attributed to DeFi protocols competing to accumulate CRV to influence the decision-making at the DEX in a way that benefits them the most.

“An increasingly large amount of CRV is being locked up as veCRV, which has the effect of offsetting some of the supply emissions,” Jason Choi, general partner and head of research at Spartan Capital, said in an email. “Protocols like Convex are locking up almost 50% of all veCRV, as other protocols are accumulating CVX, the token to Convex. In other words, more and more protocols are building off of Curve, and an entire ecosystem is emerging, engaged in the so-called Curve Wars.”

Curve Finance is a community-governed DEX facilitating the exchange of stablecoins. Decisions are made on-chain by CRV holders who gain the right to vote by locking their tokens for nearly four years to convert them into veCRV. The veCRV are used to vote in governance, boost governance rewards, earn trading fees and receive airdrops. The longer CRV is locked, the more voting power holders have and vice versa.

“One of the major powers given to veCRV holders is the ability to change gauge weights, which determine the amount of CRV rewards allocated to each pool on Curve,” DeFi Education said in a blog post published in November.

An entity intending to establish control over Curve Finance needs to consistently accumulate CRV and convert it into veCRV.

Thus, yield-boosting application Convex Finance and other DeFi protocols such as Yearn Finance and StakeDAO are luring CRV holders by offering attractive returns on staking. The protocols then deposit the CRV received into Curve Finance and collect veCRV, gaining voting power to allocate more CRV rewards to the pools for which they provided liquidity. That’s akin to a land grab.

“Recently, the ‘Curve Wars’ have been a hot topic‚” analysts at Delphi Digital said in Monday’s research note. “Simply put, Curve’s stablecoin AMM [automated market maker] rewards its liquidity providers with CRV, which can be 1) sold to realize yield or 2) staked into veCRV (voting escrowed CRV), where a weekly vote decides how rewards are allocated across Curve’s pools,” they wrote.

Convex Finance is currently the single largest owner of veCRV, holding 47% of the total supply. The protocol was offering an APY [annual percentage yield] of 48% on staked CRV at press time – that’s nearly 10 times greater than APYs offered by various pools across the multibillion-dollar DeFi industry.

“This gives them [Convex] the most governance power to decide where CRV incentives should be distributed,” Delphi Digital noted. CRV holders staking their coins on Convex Finance receive cvxCRV tokens as a deposit receipt. These coins are freely tradable, unlike veCRV, which is non-transferable. cvxCRV holders receive a share in Curve’s trading fees and boosted CRV rewards and earn Convex’s governance token CVX.

Convex Finance is built on top of Curve and allows Curve liquidity providers and CRV stakers to earn additional yields without having to lock up CRV tokens for a lengthy periods. The protocol crossed $20 billion in total value locked (TVL) over the weekend, becoming the second-largest decentralized finance protocol by TVL. The largest is Curve itself, with $24.3 billion locked. 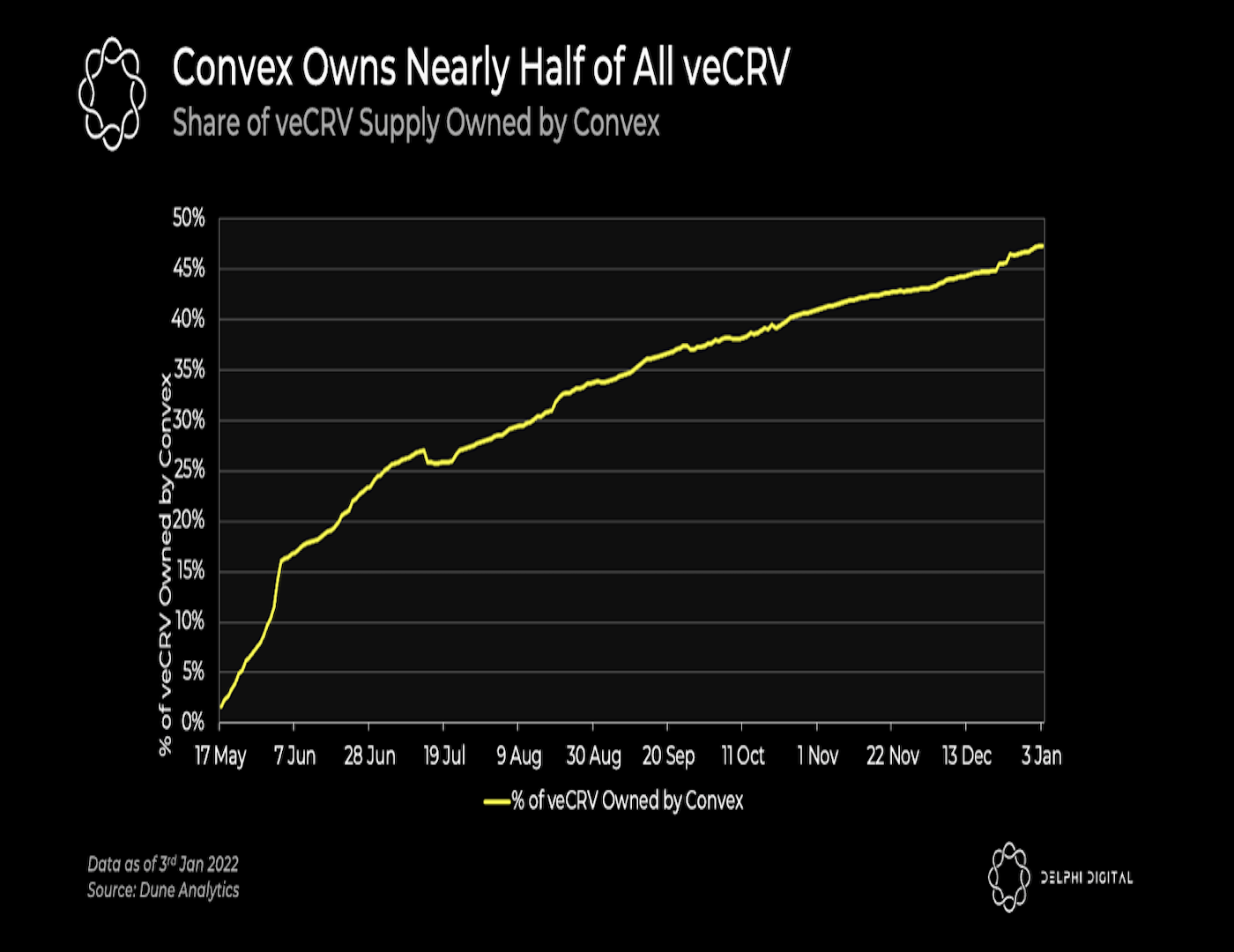 “[There is] an interesting dynamic with Convex Finance where a lot of CRV is getting locked up,” Henrik Anderson, co-founder, and CIO of Australia-based crypto-asset investment firm Apollo Capital told CoinDesk in a LinkedIn chat. “We have been bullish and large holders of CRV since the beginning. We were one of the largest early liquidity providers on Curve.”

With Convex dominating the race to accumulate CRV, some protocols have resorted to purchasing CVX, Convex’s governance token. “Instead of buying CRV tokens and staking them for veCRV to vote, protocols have resorted to bribing vlCVX holders directly. (For reference, vlCVX is Convex’s token that’s locked for 16 weeks that can harness Convex’s underlying veCRV governance powers),” Delphi Digital noted. 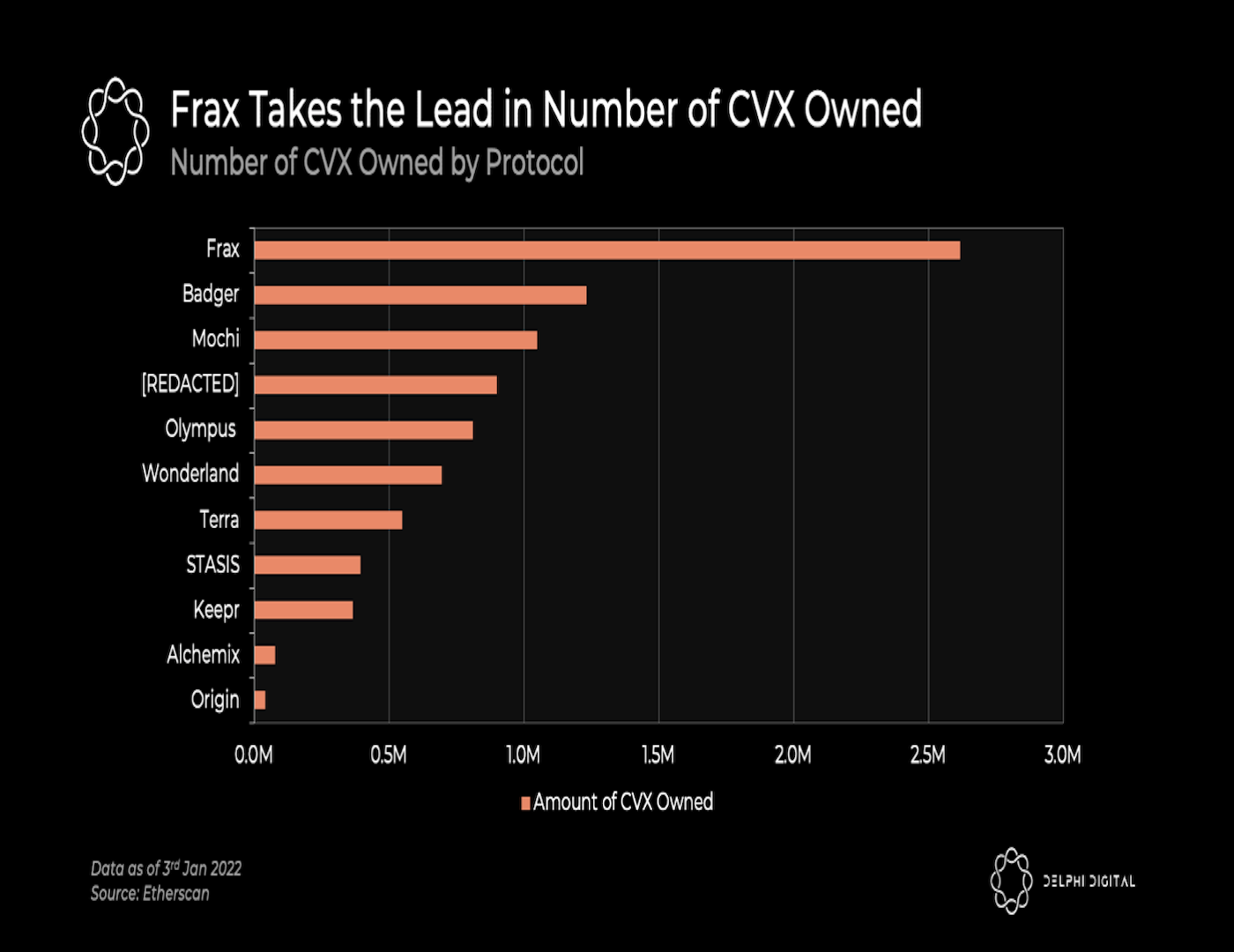