The Fantom price gained mainstream adoption as the asset rose monstrously in the past 10 days of December 2021. Yet in the last week of the month, the asset consolidated heavily within a very small time frame.

And hence showcasing the possibility of a notable rally as an outcome of the pattern formed. But will the asset regain its highest levels? If yes, then will it sustain above these levels or undergo a notable drain?

The crypto space is yet again drowning into a deep well without even attempting to rebound with notable figures. And hence the FTM price after undergoing a notable drain is attempting to manage the trembled situation. The asset has made a jump of just 1% pointing out towards the beginning of the recovery phase. 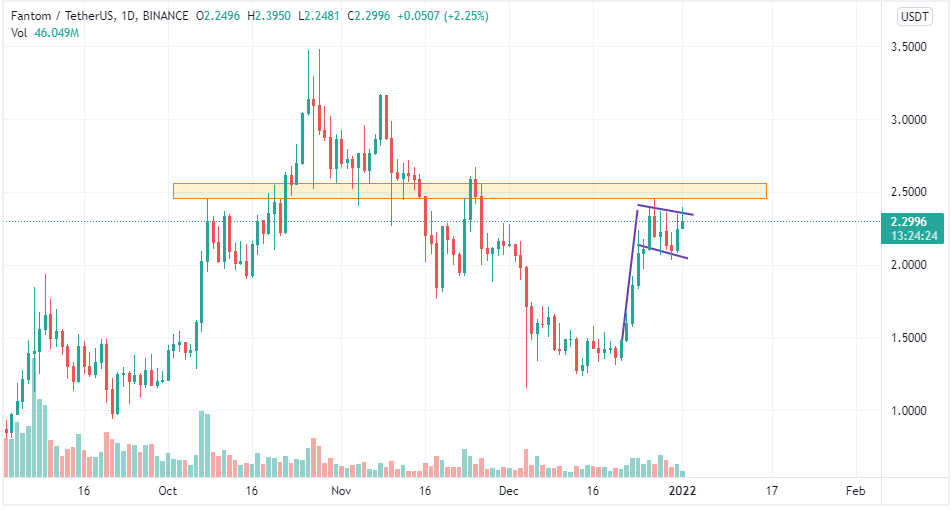 The FTM price followed a notable descending parallel channel since the beginning of November. However, the asset flipped the bearish well and diverted towards the north in the last 10 days of 2021.

The price spiked high to reach levels above $2 and began to consolidate heavily. The asset appears to have accumulated strength to leap long as its trending within the bullish flag pattern.

Interestingly, the FTM price is very close to one of the crucial resistance levels and hence breaking through these levels could be not a tedious job. Instead only with the next leg up the asset could eventually form a new ATH above $3 very soon.

Moreover, the actual target of the asset lies somewhere around $5 which could be attained in the present quarter itself. Yet the altcoins only leap long when Bitcoin ranges high and calms down. And hence Fantom price rally is directly or indirectly dependant on the BTC price trend.