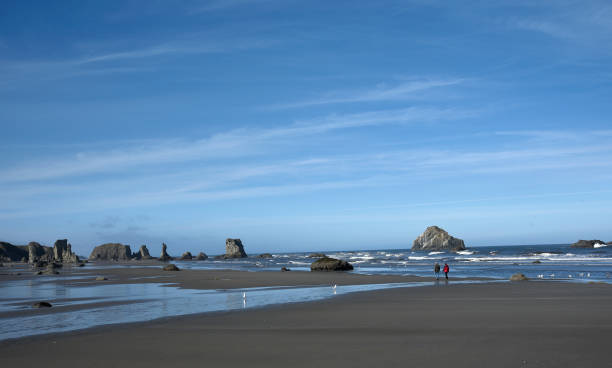 Technician’s take (Editor’s note): Technician’s Take is taking a hiatus for the holidays. In its place, First Mover Asia is publishing a piece from CoinDesk reporter Damanick Dantes’ Year-End Review series, which recaps this year’s most dramatic moments in cryptocurrency markets.

Bitcoin continued to fall, trading near $47,000 on Wednesday, after a sharp drop by more than 6% a day ago.

The No.1 cryptocurrency by market capitalization had another low daily volume across centralized exchanges due to the year-end holiday season. The center of the market is still at the expiry of the options contract on Dec. 31. 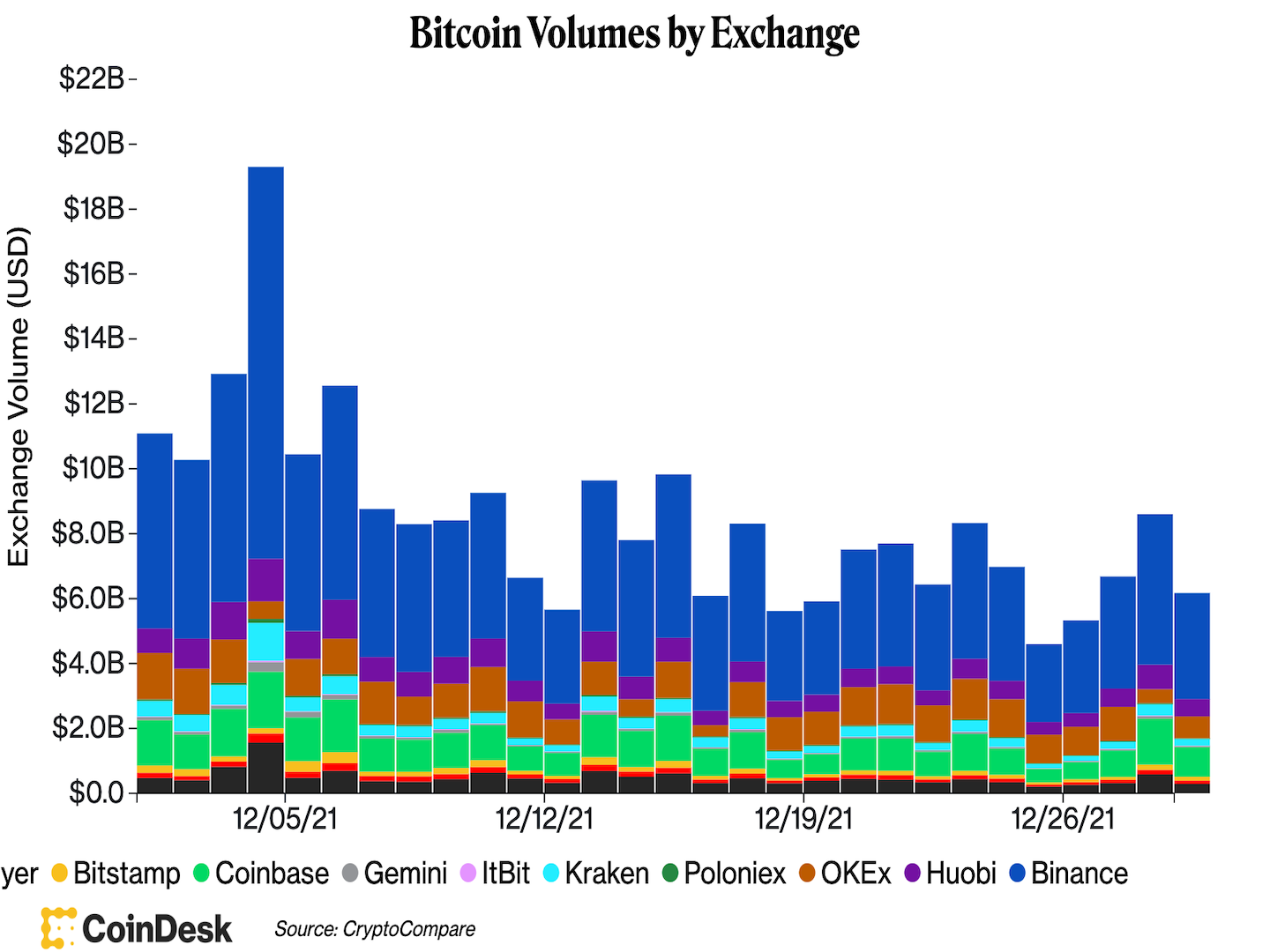 A total of 124,700 option contracts worth nearly $6 billion are set to expire on Friday, according to data provided by Skew. Options are hedging instruments that give the purchaser the right but not the obligation to buy the underlying asset at a predetermined price on or before a specific date.

Market Wrap Year-End Review: Institutions Cash Out of Bitcoin: One big investment firm pocketed big profits by selling bitcoin near the market top in April before the price tumbled. 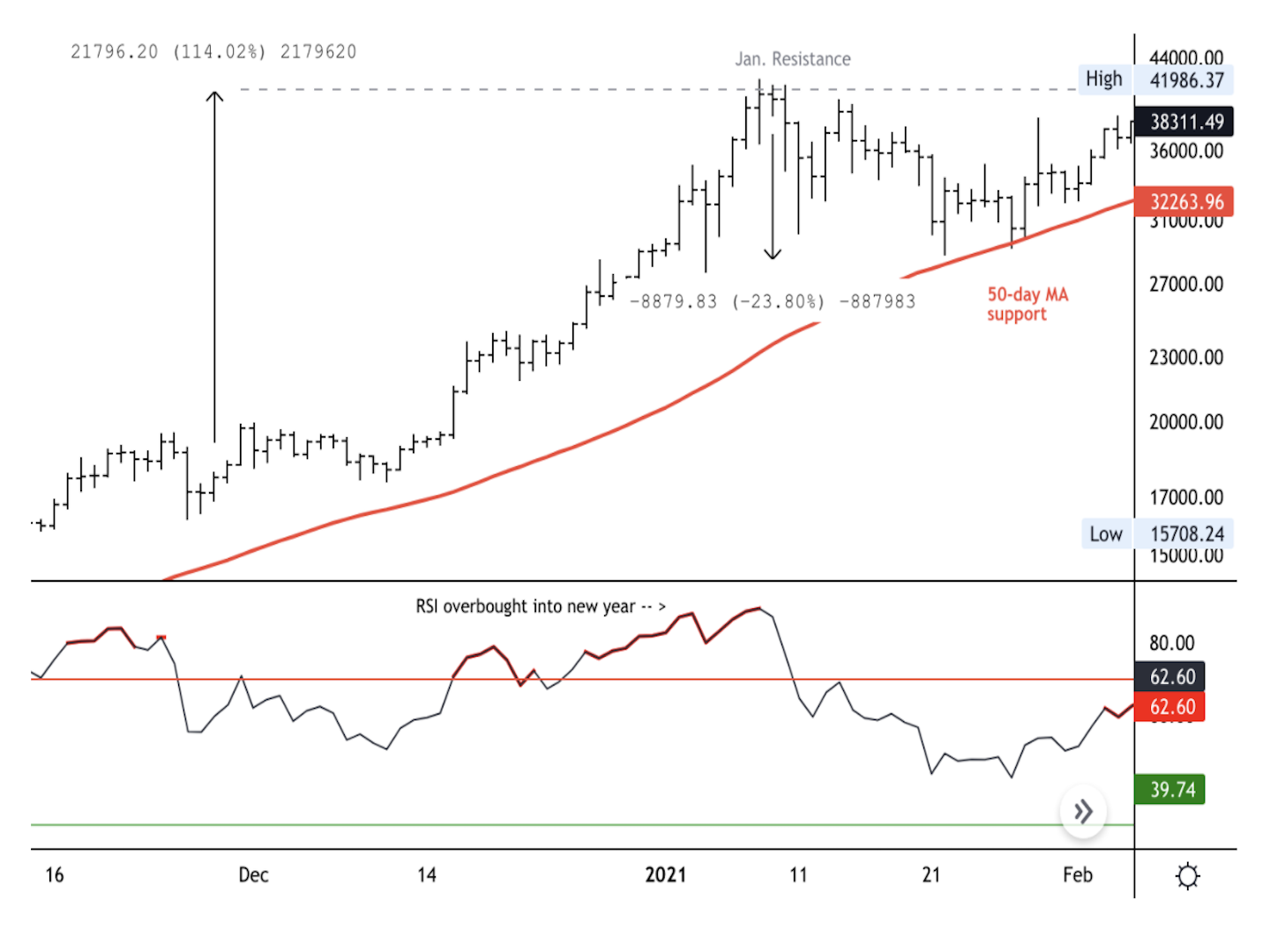 Hello, Market Wrap readers! During the final two weeks of 2021, we’re using this space to recap this year’s most dramatic moments in cryptocurrency markets – and highlight the key lessons from this fast-evolving corner of global finance. Over a series of eight posts starting on Dec. 20 and running through Dec. 30, we’ll recap what shook crypto markets this year. (If you’re looking for today’s prices and news headlines, please scroll down.)

In a recent episode of this year-in-review series, we recapped the onslaught of fear, uncertainty and doubt – “FUD,” in crypto-speak, meaning really any negative headlines – that shook crypto markets in April and May. Mood dampeners included the threat of higher U.S. capital gains taxes, China’s reinvigorated efforts to stamp out cryptocurrency trading and mining and the potential environmental harms from the Bitcoin blockchain’s extensive electricity usage.

Today, we’ll show additional reasons for widespread selling that occurred in April and May. After bitcoin’s powerful rally to start the year, fueled by fear of fast inflation, some large investors grew concerned about rampant speculation in the almost-anything-goes market and a slowdown in global money supply growth. In fact, some price chart indicators were already suggesting that bitcoin was overvalued. By June, BTC had stabilized at around $30,000, and guess what happened then? Traders bought the dip. 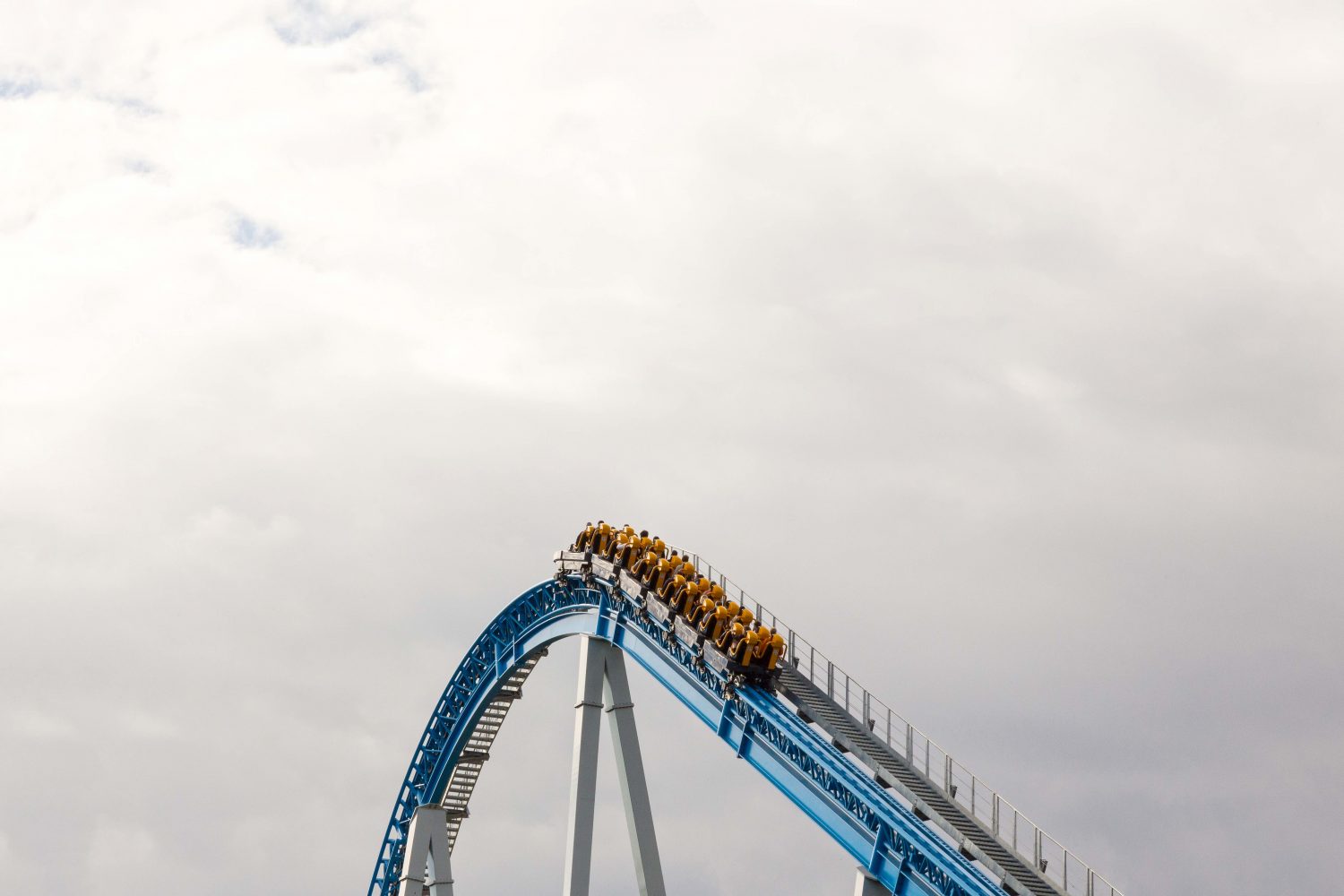 Ruffer Investments, a U.K-based asset management company, was one of the earliest big institutional investors to bet on bitcoin – starting in November 2020.

As prices shot up during early 2021, Ruffer essentially rode the wave while other fund managers were just warming up to crypto, lured by its potential for high returns.

“Last November we gained exposure to bitcoin. We viewed it as an option on an emerging store of value with a highly skewed and attractive risk/reward profile,” Duncan MacInnes, investment director at Ruffer Investments, wrote in a blog post on July 9.

But even Ruffer was taken aback by the ferocity of bitcoin’s price rally at the start the year to a new all-time high of around $65,000. And Ruffer cashed out. The market seemed to be unsustainable.

“In 2021, the excitement is in cryptocurrencies and decentralized finance. The promise is real. But so, too, is the surge in excess liquidity generated by fiscal stimulus and ongoing quantitative easing. Excess liquidity looked to us to be peaking in April,” MacInnes wrote.

The Sunday Times reported in June that Ruffer made a $1.1 billion profit in five months. 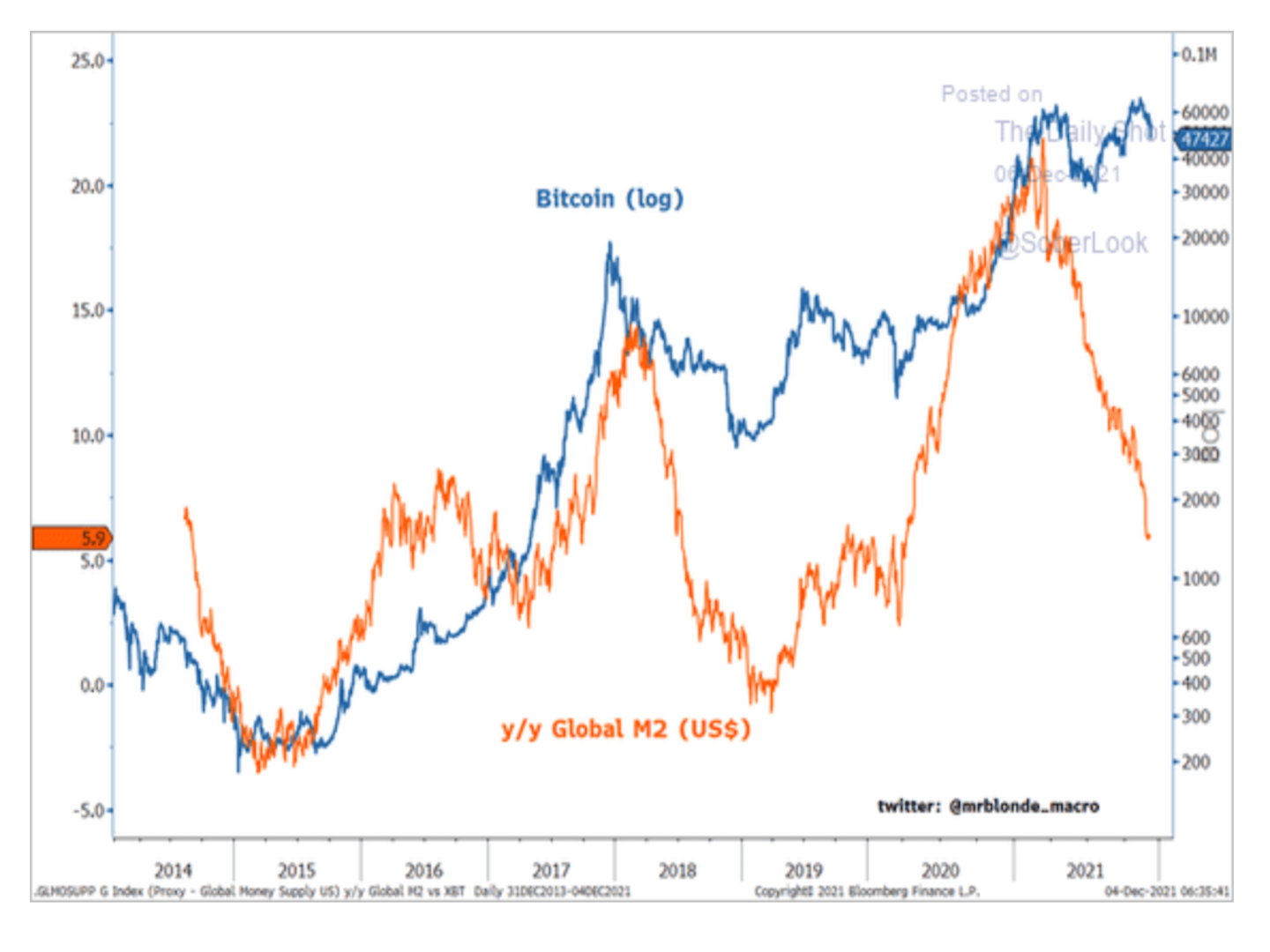 In terms of the market reversal, it sure didn’t help that several crypto-market indicators were flashing signs of excessive buying activity in the month or so leading up to bitcoin’s April price peak. For example, around March, Alternative.me’s Crypto Fear & Greed Index reached the highest level since June 2019, which had preceded a nearly 60% BTC price sell-off.

There were other warning signs in both blockchain data and price charts. (See the chart below, which looks at technical indicators on bitcoin’s “market value to realized value” ratio, a blockchain-based market metric known as MVRV.)

As nagging environmental concerns over bitcoin’s environmental footprint continued to weigh on the market, crypto-industry executives took steps to respond.

Elon Musk – the billionaire Tesla CEO whose market-moving tweets earlier in the year revealed an on-again, off-again infatuation with bitcoin – sounded a fresh openness to crypto industry dialogue over the Bitcoin blockchain’s electricity usage. Toward the end of May, Musk tweeted that he spoke with bitcoin miners about using renewable energy resources. He wasn’t turning his back on bitcoin completely, which provided some hope for discouraged bulls.

The announcement on May 24 of the Bitcoin Mining Council, which banded together miners and large investors, including MicroStrategy CEO Michael Saylor, sent BTC immediately higher by almost 12%. At that point, market panic from the April sell-off began to fade, and some traders began to buy the dip.

BTC’s price eventually stabilized at about $30,000 in June as extreme selling pressure began to slow. The chart below shows the nearly 50% price drop between April and June. And then, over the course of July and August, bitcoin mostly traded sideways, establishing a new price range as some technical indicators suggested BTC’s price was oversold.

The question in the minds of crypto traders was whether the new market environment represented a pause on the way down or the foundation for a fresh leg up. 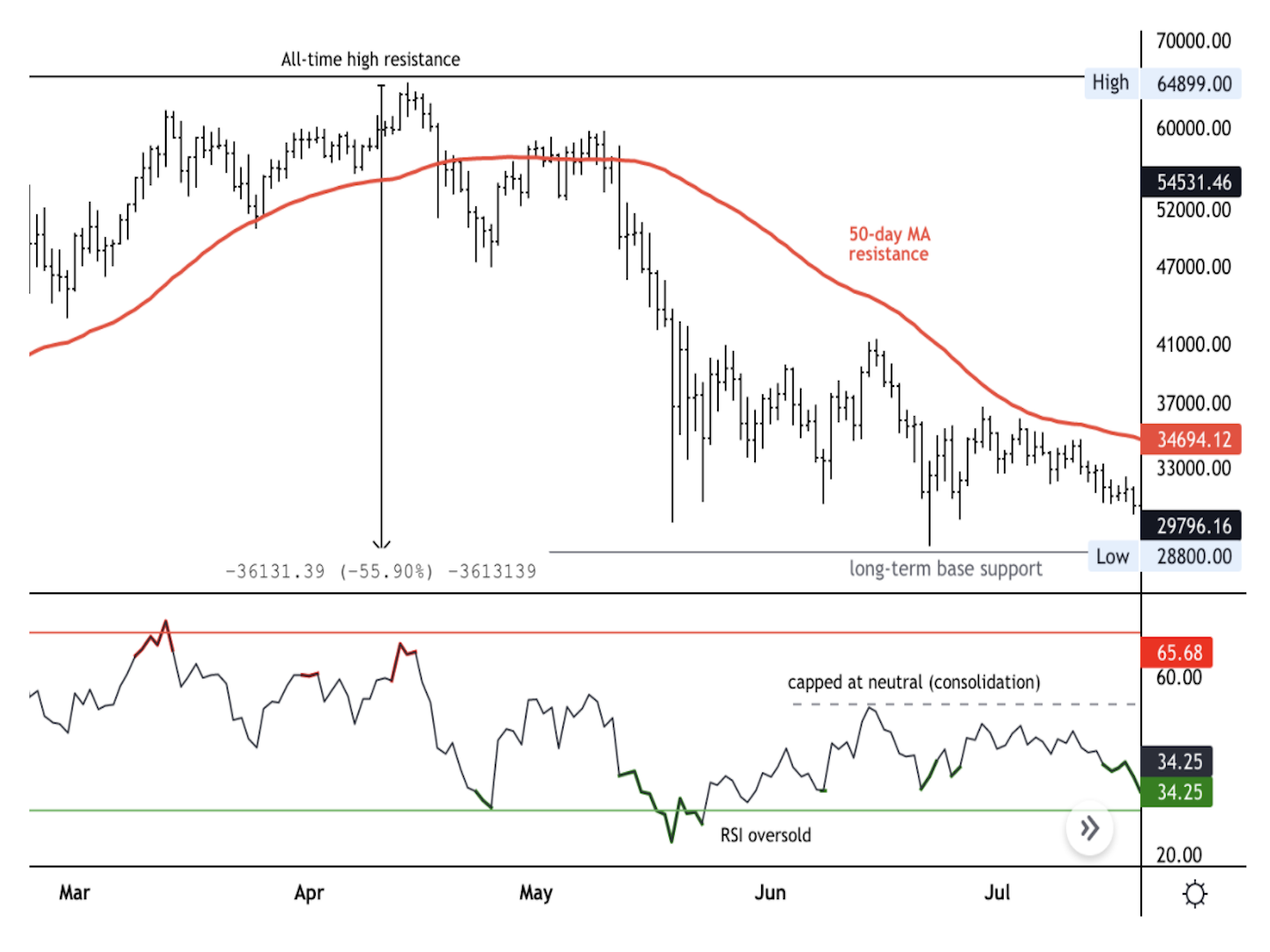 Price movements were far less volatile than they had been in recent months, and it seemed as though many investors still believed in bitcoin’s potential as a long-term store of value. Bitcoin miners claimed to be looking for ways to reduce or mitigate their environmental footprint, and most of the network’s mining power relocated away from crypto-unfriendly China.

Plus, traders weren’t using as much leverage, and market conditions seemed to calm markedly. In other words, there wasn’t much froth.

A key takeaway was that, despite what suddenly seemed to an unrelenting onslaught of negative headlines for the bitcoin market, the price was holding up remarkably well on a historical basis: The April all-time high of around $65,000 was now looking far away, but so was the 2020 low of around $3,850.

Speculation was still running high in other areas of the crypto market. In the next episode, we’ll show how some traders flocked to alternative cryptocurrencies and non-fungible tokens (NFT) while bitcoin traded sideways.

Legendary Investor Bill Tai on NFTs, Metaverse and the Future of Blockchain

In this special episode of “First Mover,” host Christine Lee saT down with Bill Tai, co-founder and chairman of “NFT for social good platform,” Metagood. The venture capital legend, startup mentor, prodigious networker, kitesurfer and passionate conservationist explained the social potential and possible risks of NFTs. He also shared his insights into the metaverse, tokenization, and wider outlook for blockchain technology.

Marathon Digital Named Top Mining Pick Heading Into 2022 by DA Davidson: The miner’s stock has compelling upside after a recent sell-off among the group, the investment bank said.

10 Great Novels About Money (and Crypto): A roundup of books worth reading for Culture Week.

Today’s crypto explainer: What Is Ether?

“The new guidance reflects a growing reality that we’re going to have to learn to live with covid as a persistent risk, and can’t let it shut down society.” (Scott Gottlieb, a Pfizer board member and former Food and Drug Administration commissioner, in a Washington Post article) 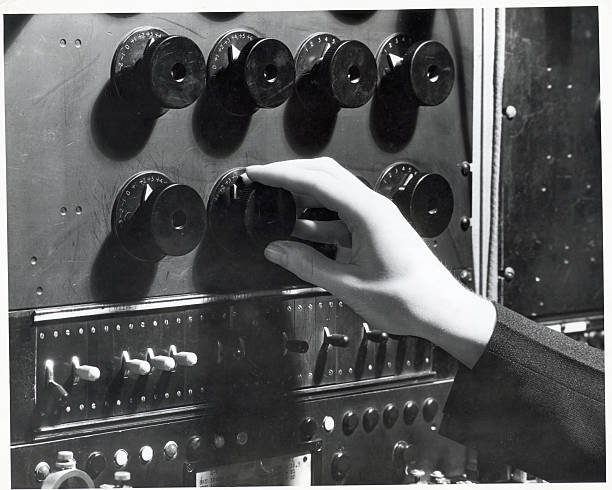 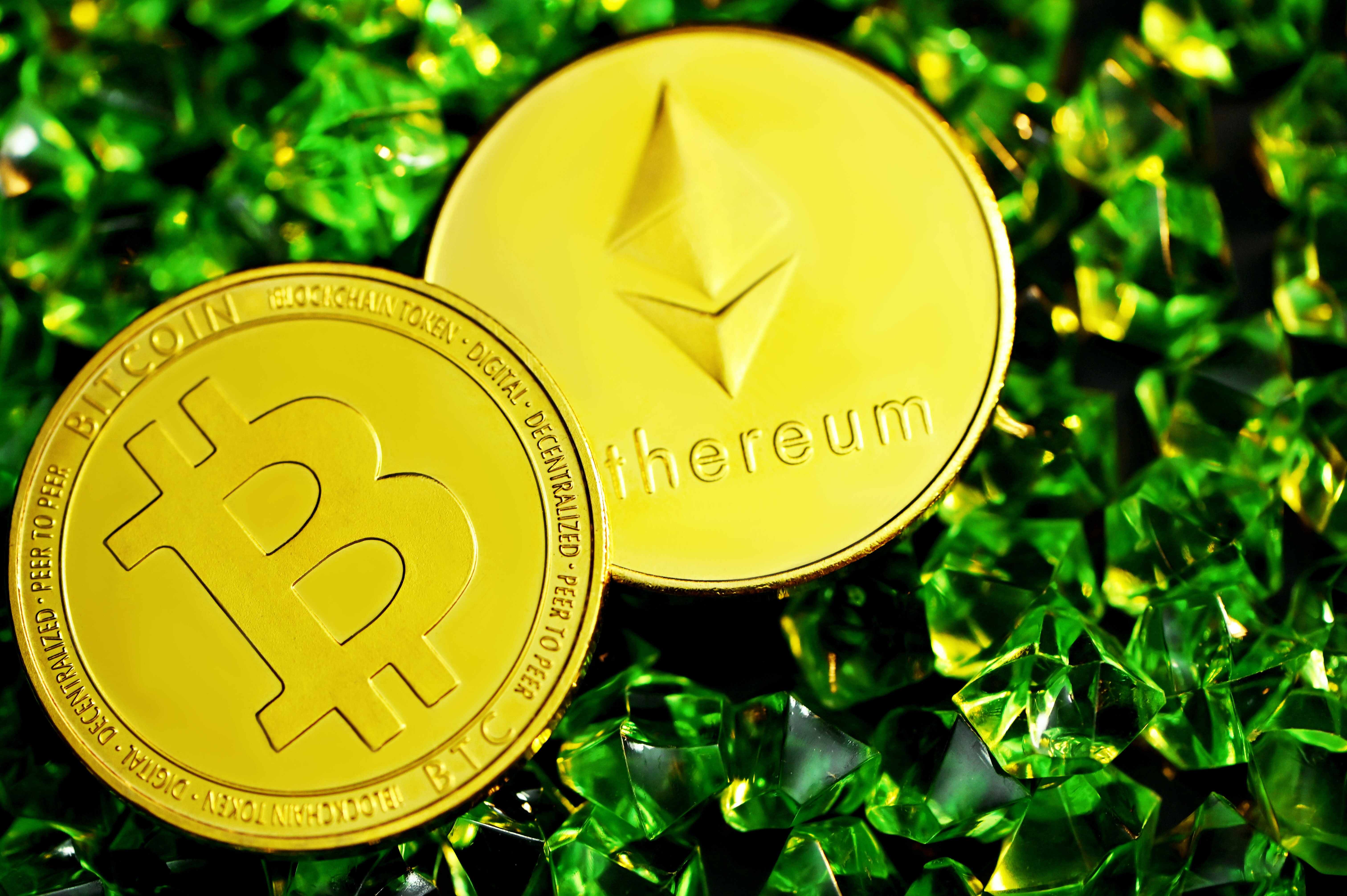