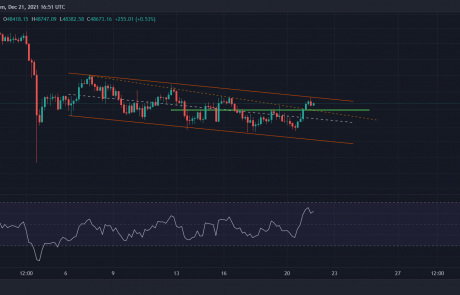 Bitcoin volatility continues. After dipping below $46K on Monday, BTC was able to recover sharply, marking Tuesday’s high above $49.3K as of writing these lines.

Looking at the following chart, the middle line in the Bollinger Band might act as a support level for the ascending trends, and at the same time, it acts also as a resistance for the descending trends.

After the bearish divergence was confirmed – as shown in the chart below – bitcoin’s price dropped from its ATH levels ($69K). The price could not break out this middle line on December 1st and shortly after dipped to $42.1K. Today, bitcoin made an attempt to break this line for the second time. A first bullish sign for reversal can be confirmed upon daily candle close above this line.

BTC is moving inside a descending channel. In the following 4-hour time frame chart, it reached the upper band of the channel but could not break it out. It seems that bitcoin is pulling back to the marked zone, for now. As per the confirmed bullish divergence mentioned in yesterday’s analysis, if the pullback finds support on top of the marked area, we can expect higher prices in the short term.

Despite Bitcoin having recorded a new ATH on November 10th, 2021, the total active addresses count is far below its prior highs of Q1-2021. This indicates that the network’s activity is still low. Thus, we need to see fresh capital inflows, made by new investors and traders.

As can be seen on the chart, we have had an over-heated futures market with high-leverage positions. At the same time, BTC reached a new ATH of around $69K.

Still, the price experienced a shakeout after that, and the futures market started to cool down. Hence, many long positions got liquidated during the shakeout.

Right now, we are at similar levels like the last time the BTC price started a rally from $40K in late September. Negative derivatives Netflow and the open interest’s RSI indicate that future market recovery could initiate. Based on this, the correction phase might soon end, so we may expect another bullish rally soon as the sentiment of the futures market turns positive again.

The above analysis was complied by @N__E__D__A, and @CryptoVizArt. Onchain data provided by @greatest_trader exclusively for CryptoPotato.