Technician’s take (Editor’s note): Technician’s Take is taking a hiatus today. In its place, First Mover Asia is publishing a column by Joon Ian Wong, the founding co-president of the Association of Cryptocurrency Journalists and Researchers and a former CoinDesk reporter.

“Bitcoin has seen short-term momentum neutralize as it consolidates above initial support near $44,200,” Katie Stockton, founder and managing partner at Fairlead Strategies, wrote in her weekly newsletter on Monday. “An improved daily MACD [moving average convergence divergence] and short-term oversold conditions suggest bitcoin could see stabilization around initial support in the days ahead.”

In her technical analysis, Stockton also highlighted that bitcoin still faces downside pressure in the intermediate term, as the charts suggested that the oldest cryptocurrency is “not yet oversold.”

At the same time, bitcoin’s trading volume across major centralized exchanges remained low on Monday, according to data compiled by CoinDesk. 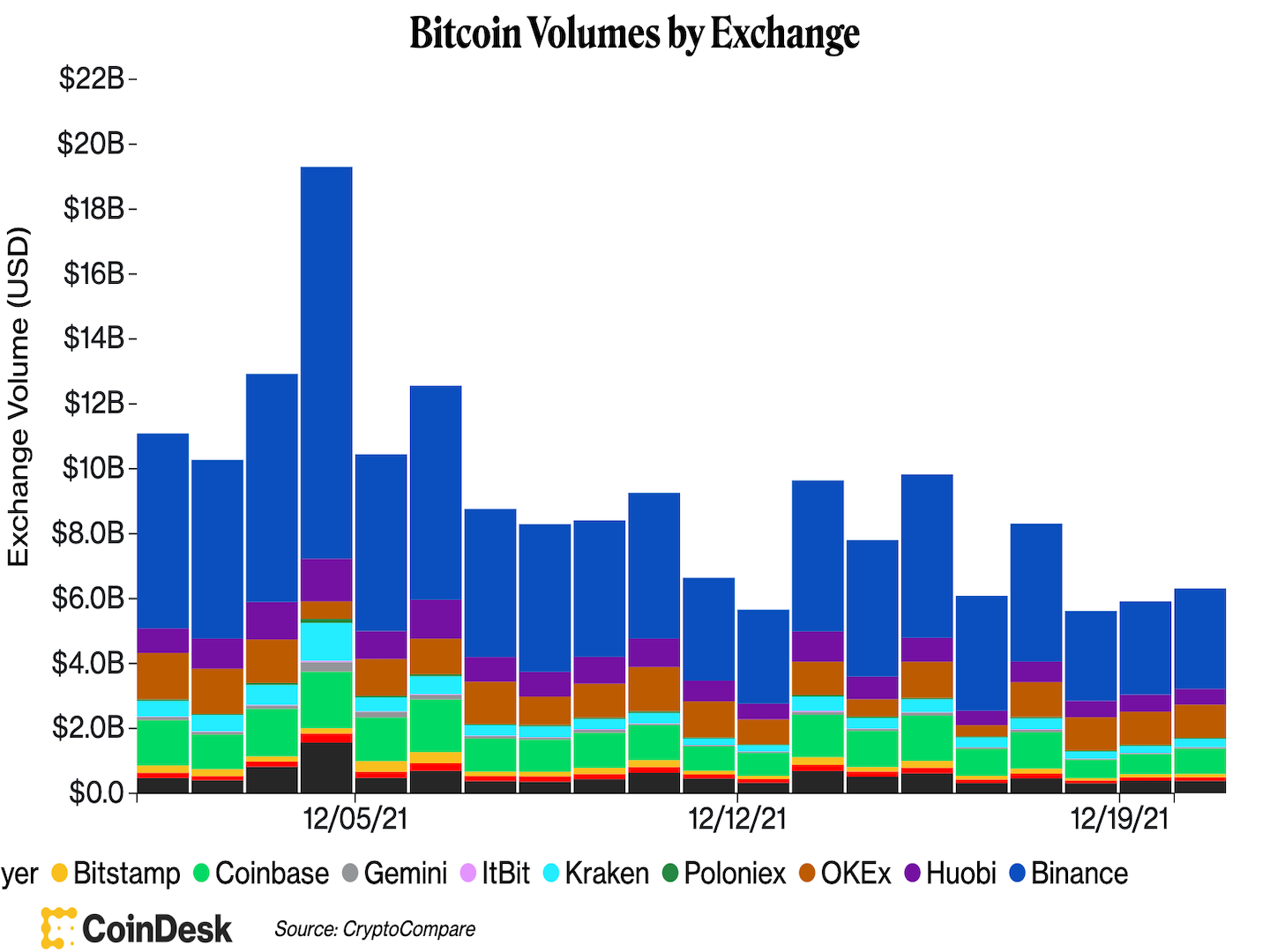 “Falling trading volumes could complicate what price action happens with Bitcoin,” Edward Moya, senior market analyst at OANDA, The Americas, wrote in his daily market update, noting bitcoin’s price could be “very choppy” in the next few weeks. “Many investors remain long-term bullish and the uncertainty over the potential short-term pain has many traders waiting until bitcoin dips towards the $40,000 level.”

On the alternative cryptocurrency (altcoin), LUNA, the native token of Terra blockchain, continued its rally since last week, logging a new all-time high at over $82, according to Messari. Data from Defi Llama showed that the total value locked, or the dollar value of all the tokens locked in the smart contract built on a blockchain, on Terra had surpassed that on Binance Smart Chain, as of Monday. Shiba inu was up over 5% over the past 24 hours.

The Future of NFTs Is Fungible: The many NFT communities that have sprung up this year are finding that it’s not so easy to manage a community with unique tokens alone. (by Joon Ian Wong, the founding co-president of the Association of Cryptocurrency Journalists and Researchers.)

It’s the refrain heard in Discord servers around the world. When is such-and-such project going to airdrop a token to its community members? This question is particularly urgent if a community happens to assemble around a $2 billion NFT project – one like Bored Ape Yacht Club. That’s why BAYC had an answer to the question in October:

As the Bored Ape holders have discovered, it’s super cool to launch a non-fungible token collection and see a community develop around it. But at some point it gets difficult to herd all the cats – especially if said cats are also very rich people. What if there were some way to coordinate them and align their interests? What if you could do all of this on-chain? With a cryptographic token perhaps?

This article is part of Culture Week, which explores how crypto is changing media and entertainment.

This is why the future of non-fungible tokens is fungible. The many NFT communities that have sprung up this year are finding that it’s not so easy to manage a community with unique tokens alone. Fungible tokens created by the community start to become very attractive in theory. Luckily for them, this concept already exists: it’s the world of social tokens – streams of community-centric tokens that are, yes, fungible.

Social tokens have been ably covered in the pages of this fine website for some time. Here’s a great Jeff Wilser feature that dives deep into the genre. But here’s a quick summary of how they’re supposed to work: Suppose you spot a promising young artist from among the selection presented to you by Spotify’s algorithm. You stream their music thousands of times over the years, gradually attending concerts and buying merch. Eventually, the artist breaks through to the mainstream and is picking up Grammys left and right, and appearing on “Saturday Night Live.”

The above example might be called the “Taylor Swift Hypothesis” of social tokens. The way the hypothesis works is, imagine injecting a token into the scenario above. What if that artist is Taylor Swift, and what if she has issued $SWIFT in the earliest days of your fandom. You might have accumulated lots of $SWIFT, watching the stash grow in fiat money terms as Taylor ascended the heights of pop stardom. The Swift Hypothesis is described in the Index Ventures investor Rex Woodbury’s recent think piece on social tokens in The Atlantic.

But let’s look at why some NFT believers think fungible tokens for communities don’t work. Here’s GMoney, the cutesy, pixelated, half-man, half-monkey NFT collector making his argument: A stash of tokens is first held by a creator who distributes the tokens to fans. As the creator creates more valuable work, those tokens rise in price. But to realize those gains, the creator must continuously sell the tokens to fans. This leaves creators with a diminishing horde of tokens, thus disincentivizing them to increase the value of their work.

“Your incentives are misaligned,” GMoney says.

That’s the catch: Taylor would have been dumping $SWIFT on her fans all the way to the top. Her most loyal fans would have been her exit liquidity, to adopt the parlance of Crypto Twitter. The Swift Hypothesis would become the Swift Pump and Dump if that was the only way social tokens worked.

And GMoney isn’t alone among the cryptorati casting doubt on social tokens. Here’s Simon de la Rouviere, one of the authors of the ERC-721 standard, positing that NFTs are, in fact, better social tokens!

This is as good a place as any to mention that I have a vested interest in social tokens working. I’m an adviser at Rally, which helps esports streamers, musicians and creators of all stripes issue their own tokens to fans. I’m also a contributor and investor in Seed Club, an accelerator for social token projects.

As we know in crypto, misaligned incentives is one of the most damning charges that can be leveled at a project. So I turned to Jess Sloss, the person who started Seed Club and who stays at the cutting edge of social tokens, for a robust rebuttal to GMoney’s monkey business.

“Social tokens are better equity,” Sloss tells me. Dear reader, before you start dialing the Securities and Exchange Commission hotline for unregistered securities offerings, this is what he really meant by that: Fungible tokens for a community are more expressive than NFTs. While NFTs might be good at capital raising and formation, they are less good at keeping a community going. This is where social tokens come in.

“What many of these communities haven’t thought through is how to sustain [them] into the future?” Sloss says. “Ultimately, we need to be able to reward more nuanced collaboration and represent that in the governance stack.”

Here’s how Sloss frames it, using the startup as a metaphor: “If a creator has a community of fans looking to create something bigger and more broad than the work of that creator, then a fungible token makes a lot of sense.

“Essentially, you have a bank account and a cap table. The fungible token represents that cap table that you can use to pay people, sell for investment [and] reward people for the work they do in that community. All those things are very hard to do with an NFT unless you’re minting new NFTs and giving them away, or you’re holding bags of NFTs ... You’re going to get stuck at some point.”

Bored Apes could be a glimpse into the future of an NFT community that gets coordinated around a new, fungible, token. SquiggleDAO, which Sloss works on, is another example: a collector DAO for generative art and Chromie Squiggles in particular, its $SQUIG token lets holders vote on how they use the DAO’s resources, which includes $8 million in USDC it raised from selling $SQUIG to big investors.

The fun in fungible

What else can you do with a social token? Sloss corrects me: The term of art now is community tokens or community DAOs. He says he’s seeing a surge of interest in founders of Web 2 companies exploring how to disperse ownership of their firms to communities using a DAO as he sifts through applications for Seed Club’s fourth cohort (the third cohort had Pussy Riot and other notables). “They’re recognizing they’re building on a tech stack that will be quickly outdated and will have a tough time competing with a Web 3 version of their product,” he said. “There’s an explosion of DAOs being created right now.”

The hottest use cases, Sloss says, are DAOs that aid learning, particularly learning about Web 3. He name DAO Masters, Web3 baddies (“welcome to the hot girl metaverse”) and the Crypto, Culture and Society DAO as prime examples. He’s also bullish on a token from the industry newsletter Water and Music that incentivizes research on music and technology among its subscribers.

“I think longevity is going to come into the operations,” Sloss says. “It’s like, let’s go out and buy the Constitution … then what? The ‘then what’ is the exciting part.”

Digital Asset Funds Hit by Record $142M of Outflows: Investors pulled money out of funds focused on bitcoin and the currencies of Ethereum, Solana and Polkadot, as crypto markets retreated.

Bitcoin, Ether Dip in ‘Bearish Asia Session’ as China Rate Cut Fails to Inspire Risk Buying: Bitcoin has carved out most of its year-to-date gains during the American hours.

JPMorgan to Develop Payment Blockchain System for Siemens: Report: The two companies have said this would be a first-of-its-kind application.

SEC Delays Decision on Grayscale and Bitwise Spot Bitcoin ETFs: The agency is extending its review of two proposals by at least 45 days.

Other voices: How Venture Capitalists Think Crypto Will Reshape Commerce

“We never know to what extent our government will try to crack down … to wipe us out.” (Ben, underground miner in China as reported by CNBC) ... ”Does it matter that NFTs are an acronym? No. Office workers figured out what PDF meant real quick.” (Cinneamhain Venture Partner Adam Cochran on Twitter) ... A DAO is a relatively new form of politically decentralized organization whereby a network of people coordinate through software code and automation to govern themselves toward a stated objective ... DAOs are testing the possibilities of decentralized self-governance...( Kelsie Nabben, Alexia Maddox for CoinDesk) 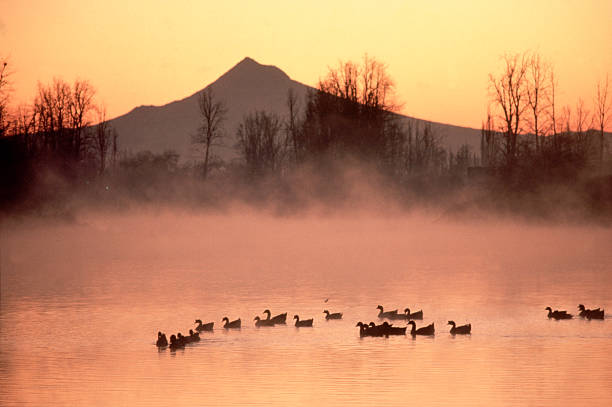