Avalanche (AVAX) turns bullish as USDC launches on the Avalanche blockchain network. Avalanche price is up 12% on the day currently trades in a third straight bullish session today as seen on the four-hour chart. AVAX current price rally appears unstoppable as bulls aim for the December 01 range high above $127.

Circle Launches Its USDC On Avalanche

The arrival of Circle’s USDC on Avalanche affirms the network’s push for diversity following the launch of Tether’s stablecoin USDT on the network in November. The announcement was made in a Tweet by Emin Gün Sirer, Founder and CEO of Ava Labs.

The integration of $USDC natively on #Avalanche marks another important milestone in the maturation of the platform and utility of stablecoins. https://t.co/wOiNdQAuAI— Emin Gün Sirer🔺 (@el33th4xor) December 14, 2021

USD-backed stablecoins could increase on-chain activity on the Avalanche network and could drive developers to build their projects on the ecosystem.

USDC’s launch on Avalanche has triggered a bull run in the token and analysts are bullish on Avalanche price at it targets areas above $127.

At the time of writing, AVAX price is hovering around $113.56 and appears to be battling immediate resistance from the $113.85 level. A rise beyond this level could see the Avalanche token price rise to ta the $118 major resistance level after which the next logical move would be the December 01 range high above $127. If this happens, AVAX would have risen $12.06% from the current price. 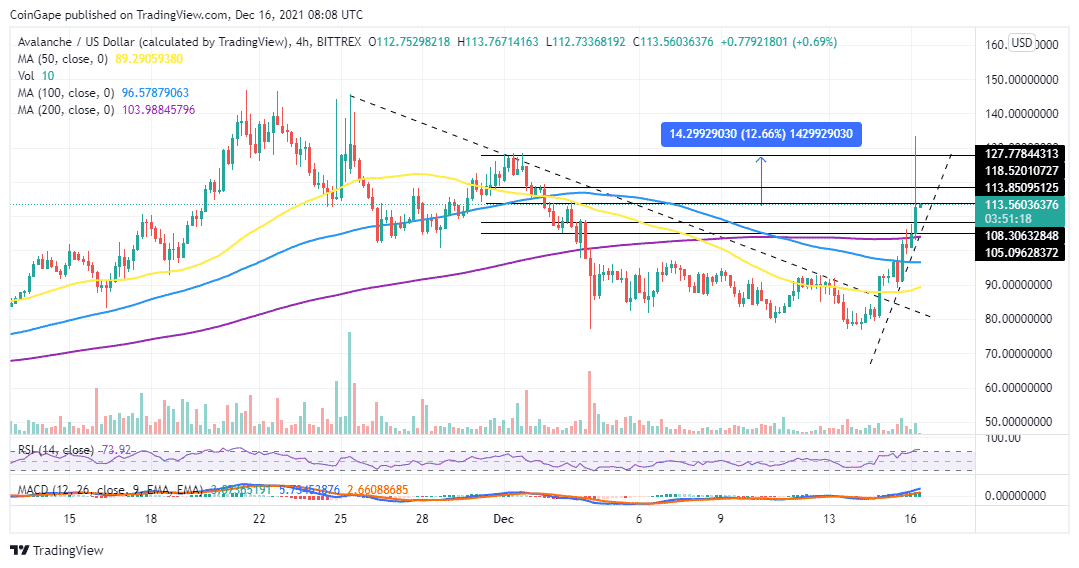 Note that Avalanche’s bullish outlook is accentuated by the upsloping moving averages as well as the upward movement of the Movign Average Convergence Divergence (MACD) indicator above the zero line.

Moreover, the upward movement of the RSI and its position at 75 in the overbought region suggests that Avalanche price comfortable in the hands of the bulls, adding credence to the bullish outlook.

It is worth noting that the RSI shows that Avalanche is overbought pointing to a possible price correction in the near-term. Therefore, if the bullish momentum gets overheated and AVAX price drops below the immediate support around $110, the token will drop to tag the support at 108.