Dogecoin price prediction is bearish as it trades in the red a day after Elon Musk’s remarks it support of DOGE on Tuesday. The price of the meme coin has dropped sharply over the past 24 hours losing approximately 6.7% on the day. If the trend continues, Dogecoin price might drop back to the Monday close around $0.1574.

Tesla To Accept Payments in DOGE

Dogecoin could stop being just a meme coin with the possibilities of being used as a payment mechanism. The Tesla CEO, Elon Musk said that Tesla, the Electric Vehicles company, will accept payment in Dogecoin on some of its merchandise. The “Father of Dogecoin” revealed this in a tweet as shown below:

Elon Musk has been known to show support for Dogecoin at one point saying that he plans to start a University in Texas and the tuition fees would be paid in DOGE. Musk has also been known to favour Dogecoin saying that it might be a better payment system compared to Bitcoin.

Note that every time the Tesla billionaire CEO mentions Dogecoin in one of his tweets, the price of the meme coin surges almost immediately.

However, after the rally yesterday, a correction has ensued that threatens to take the Dogecoin price deeper.

The recent DOGE/USD price action has formed a falling flag on the four-hour chart with yesterday’s green candlestick to an intraday high being the flag post. Failure to overcome the resistance at $0.1847 where the 100-period Simple Moving Average (SMA) and the resistance line of the flag coincide, the current correction will continue.

If this happens, Dogecoin is likely to tank towards yesterday’s opening price around $0.1774, a 12% drop from the current price, 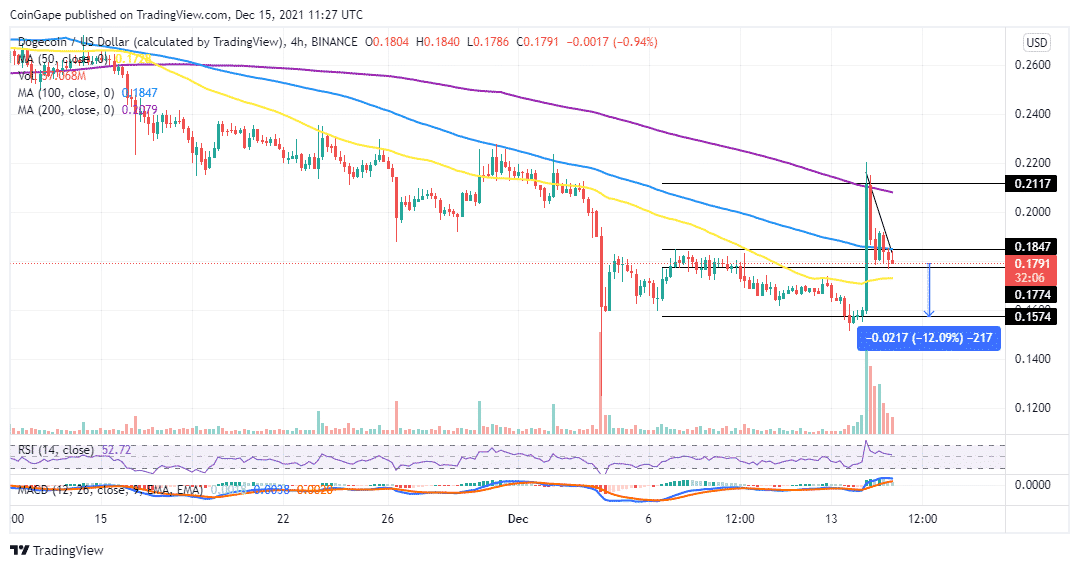 At the time of writing, Dogecoin price is hovering around $0.1791 and rising above the 100-Sma could do the above’s bearish narrative with Tuesday’s intraday high above $0.22 being the target upwards.

Dogecoin Price Analysis: Why DOGE Coin Surge 30% Today, And Should You enter?