China’s crypto crackdown policies starting in May this year saw it lose the biggest mining hub status within two months. At the start of May, China’s share in the Bitcoin (BTC) mining network was over 60%, but with strict regulatory policy and a total ban on BTC mining saw that share fall to near zero by the end of July. As per the latest report, China’s Yunnan province recently stated it has completely eradicated BTC mining and saved 2 billion kilowatt-hours of electricity in the process.

China’s loss has turned into a great opportunity for countries like the US, Kazakhstan, and Russia, which saw an influx of Chinese mining farms in the wake of the crypto mining ban. The US became the leading Bitcoin mining contributor and the state of Texas has become the new mining hub.

A Bloomberg report has indicated that a large number of miners are expected to makeshift to Texas in the coming two years time. The primary reason for Texas to become a growing mining hub is the availability of cheap electricity and favorable regulations. The surge in demand for mining could see an increase of 5,000 MW. 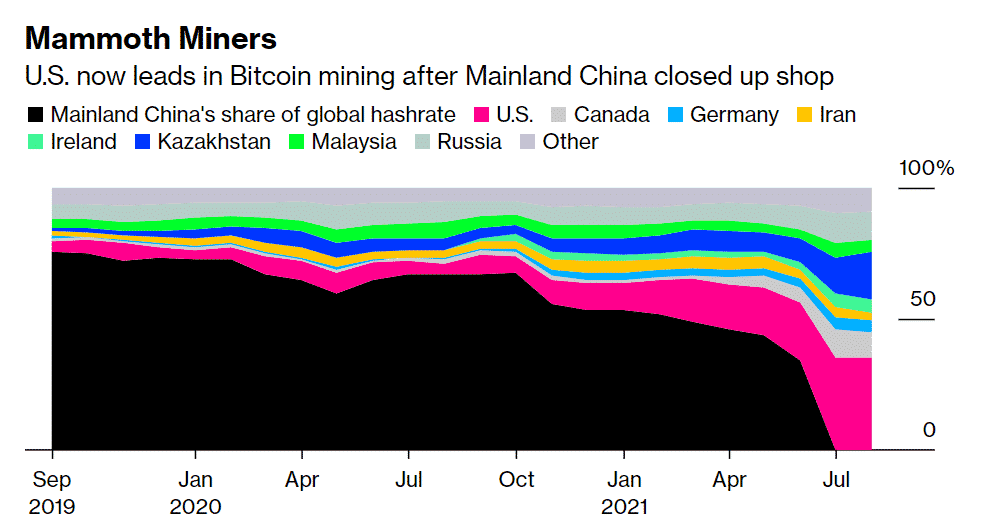 China’s dominance in crypto mining was often seen as a threat by many experts, given the country’s strict policies against the crypto market. So when the crypto crackdown resulted in one of the biggest miner migration, may saw it as a big win. The Bitcoin network mining hashrate plunged by nearly 50% in the wake of the Chinese ban, but has recovered quickly since then and hit a new mining difficulty high.

The growth of Texas as a Bitcoin mining hub has also led to concerns about power shortages and blackouts as observed in Iran and Kazakhstan. But local administration is confident of making proper arrangements to accommodate new demand.

“Texas has been very business friendly and Ercot is one of the largest deregulated energy grids in the world,” said one of the miners.

Kazakhstan Aims to One Up El Salvador In Clean Bitcoin (BTC) Mining, Here’s the Plan