The U.S. Consumer Price Index (CPI) hit a new four-decade high in November at 6.8% confirming what market pundits have been calling all along. The Asian and European markets recorded a slump in the early morning prior to the data release and the U.S. government is planning to introduce new measures to contain the damage. The main cause of rising inflation has been untapped money printing by governments around the globe which only got worse because of the raging pandemic. 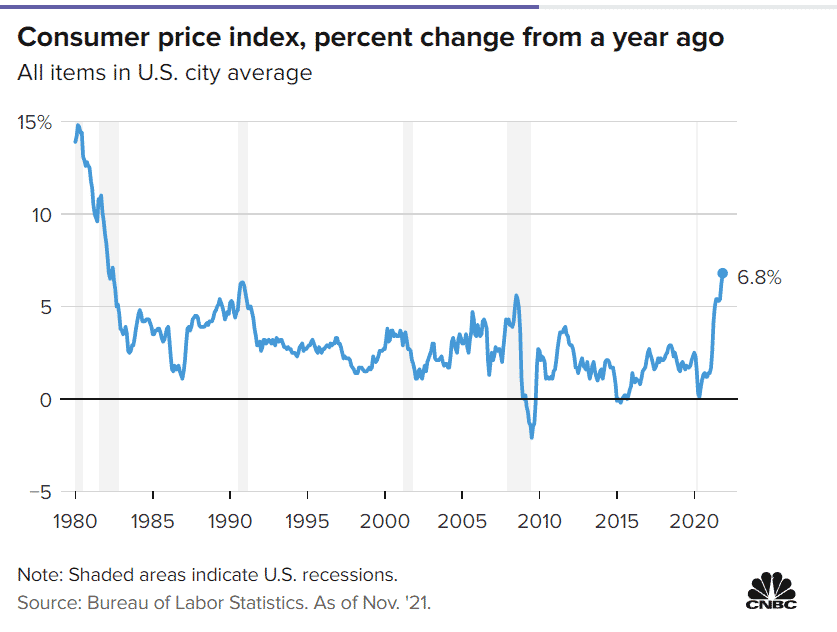 During the first COVID wave, traditional and crypto markets dipped initially, but Bitcoin and altcoins later found their footing and grew exponentially. Bitcoin left gold behind to become the growing choice of inflation hedge among institutions and retail investors alike. In fact, pandemics played a key part in Bitcoin’s institutional adoption at the start of this year.

The latest COVID variant omicron has started to induce fear in the traditional markets, and market experts predict another rocky quarter for the financial markets.

A majority of market pundits believe the inflation would take down every market including the cryptocurrency one. However, crypto proponents suggest otherwise, many crypto market analysts have predicted the rise of Bitcoin and other altcoins in the first quarter of 2022 as December turned bearish again.

Even when the traditional market slid in caution, Bitcoin and altcoins made a quick recovery as soon as the CPI data was released yesterday. BTC price jumped as high as $49,900 from a daily low of $47,236 and ETH price also recovered above $4,100 but fell back below $4,000 towards the end of the day. At the time of writing, BTC was consolidating above $48K, but the bearish sentiment is more dominant in the market especially after the CPI data release. BTC would look to consolidate and regain some bullish momentum as the new year come close.