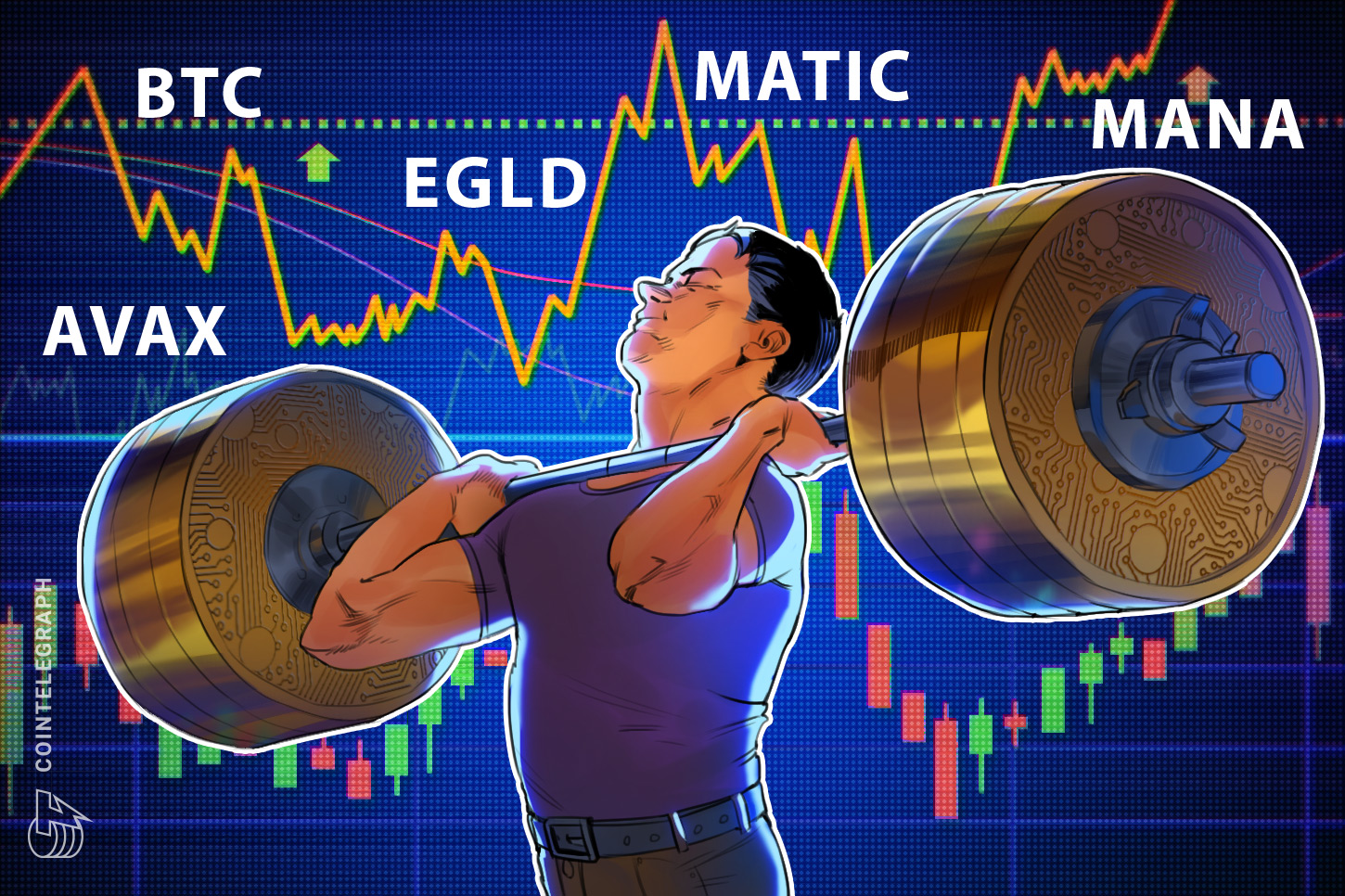 Bitcoin (BTC) is witnessing a tough tussle near the $58,000 mark but that has not stopped select altcoins from hitting a new all-time high. This shows that traders are watching the fundamental developments on individual coins.

One of the recent top performing major altcoins has been Avalanche (AVAX), which has soared more than 120% in November. The coin caught traders’ attention leading up to the announcement by accounting firm Deloitte which plans to build its disaster relief platforms on the Avalanche blockchain.

In another step that shows growing crypto adoption, El Salvador's President Nayib Bukele announced the launch of Bitcoin city, which will be powered by geothermal energy and initially funded by $1 billion worth of Bitcoin bonds.

Could strong buying at lower levels boost Bitcoin above $60,000 and will altcoins participate in the recovery? Let’s study the charts of the top-5 cryptocurrencies that could attract traders’ attention in the short term.

Bitcoin reversed direction from $55,600 on Nov. 19 but the recovery is facing resistance at the 50-day simple moving average ($60,187). The moving averages are on the verge of a bearish crossover and the relative strength index (RSI) is in the negative area, indicating that bears are making a strong comeback.

If the price turns down from the current level, the bears will attempt to extend the correction by pulling the BTC/USDT pair below $55,600. If that happens, the next stop could be the strong support zone at $52,500 to $50,000.

If the price rebounds off this zone, the bulls will try to push the pair above the moving averages and the downtrend line. Such a move will indicate that the corrective phase may be over. The bulls will then try to drive the price above the all-time high at $69,000.

Alternatively, a break below the psychological support at $50,000 could intensify selling as traders rush to the exit. The pair could then drop to $45,000 and later to $40,000.

The 4-hour chart shows that bears pulled the price below the strong support at $58,000 but they could not build upon this advantage. The bulls bought the dip and have pushed the price back above the 20-exponential moving average.

If the price sustains above $58,000, the pair could rally to the downtrend line. A break and close above this resistance could indicate that bulls have the upper hand. The pair could then rally to $62,000 and later to $67,000.

Conversely, if the price turns down from the current level and breaks below $55,600, it will signal the possible start of a deeper correction.

Avalanche is in a strong uptrend and has consistently been making new highs for the past few days. The bulls pushed the price above the 200% Fibonacci extension level at $146.18 today but the long wick on the day’s candlestick shows profit-booking at higher levels.

The rising 20-day EMA (96) indicates that bulls are in command but the RSI near 80 suggests that the rally may be overheated in the near term. This could result in a minor correction or consolidation in the next few days.

If the price turns down from the current level, $110 and then the 20-day EMA may act as a strong support. A sharp rebound off either level will suggest that the bulls are viewing the dips as a buying opportunity. The pair could then march toward the 261.8% Fibonacci extension level at $175.58.

Contrary to this assumption, if the price breaks below the 20-day EMA, it will suggest that traders are rushing to the exit. That may pull the AVAX/USDT pair to $81.

The pair has turned down from $147, indicating aggressive profit-booking at higher levels. The bears will now attempt to pull the price to the 20-EMA, which is likely to act as a strong support.

If the price rebounds off the 20-EMA, it will indicate strong buying on dips. The bulls will then try to resume the uptrend by pushing the pair above $147.

Contrary to this assumption, if the price breaks below the 20-EMA, the selling could accelerate and the pair may drop to $110. Such a move will suggest that the bulls may be losing their grip. The pair could thereafter drop to the 50-SMA.

Polygon (MATIC) has been trading inside an ascending channel pattern for the past few days. The bulls pushed the price above the resistance line of the channel on Oct. 28 and 29 but failed to sustain the breakout. This may have prompted selling from short-term traders.

The bears again successfully defended the resistance line on Nov. 3. This started the downward journey toward the trendline of the channel. The downsloping 20-day EMA ($1.69) and the RSI just below the midpoint indicate a minor advantage to sellers.

If the price turns down from the current level, the MATIC/USDT pair could drop to the trendline. The bulls are expected to defend this level aggressively. If the price rebounds off the trendline and rises above the 20-day EMA, it will indicate that the selling pressure may be reducing. That may signal the start of the northward journey toward the resistance line.

Contrary to this assumption, if bears sink the price below the trendline, it could result in a decline to the psychological support at $1.

The 4-hour chart shows that bulls are attempting to stage a relief rally from the strong support zone at $1.50 to $1.40. The 20-EMA has started to turn up and the RSI is near the center, indicating that the selling pressure may be reducing.

If bulls drive the price above $1.70, the pair could rise to $1.80. A break and close above this level will indicate strength. The pair could then start its up-move toward $2.15. On the downside, the selling may accelerate if the bears pull the price below $1.40.

The bears tried to pull Elrond (EGLD) below the breakout level at $303.03 from Nov. 16 to 18 but the bulls bought the dips as seen from the long tail on the candlesticks. Strong buying on Nov. 19 pushed the price above the overhead resistance at $338.70.

This resumed the uptrend and the EGLD/USDT pair has reached near its pattern target at $427. The sharp rally has pushed the RSI deep into the overbought zone, suggesting that a minor consolidation or correction could be around the corner.

The first support on the downside is the breakout level at $338.70 and then the 20-day EMA ($325). If the price rebounds off either level, it will suggest that traders continue to buy on dips. The bulls will then try to resume the uptrend with the next target objective at $500.

This positive view will be invalidated if the price turns down and plummets below the breakout level at $303.

The 4-hour chart shows that bears tried to stall the up-move at $400 but the bulls were in no mood to relent. Sustained buying at higher levels pushed the pair above the psychological barrier. The rising 20-EMA and the RSI in the overbought zone indicate that bulls are firmly in the driver’s seat.

The first important level to watch on the downside is $380. If bears pull the price below this support, the pair may drop to the 20-EMA. A strong rebound off this support could keep the uptrend intact but a break below it will suggest that the bullish momentum may be weakening.

Decentraland (MANA) turned down from the 78.6% Fibonacci retracement level at $4.35 on Nov. 20. This indicates that traders may be selling on rallies.

The MANA/USDT pair could now drop to the immediate support at $3.50 and if this level gives way, the correction could deepen to the 20-day EMA ($3.11). If the price rebounds off either support, it will suggest that sentiment remains positive and traders are buying on dips.

The bulls will then attempt to push the price to $4.36. A break and close above this resistance could open the doors for a rally to $4.94. This positive view will invalidate if the price continues lower and breaks below the 20-day EMA.

The pair has been rising inside an ascending channel pattern. The failure of the bulls to push the price above the resistance line may have prompted selling from traders, pulling the price below the 20-EMA.

Both moving averages have flattened out and the RSI has dipped near the midpoint, suggesting that the bullish momentum may be weakening. The pair could now drop to the trendline of the channel where buying may emerge.

If the price rebounds off the trendline, the pair could continue its up-move inside the channel. The buyers will then try to push the price to the resistance line. The bullish momentum could pick up on a break and close above the channel. 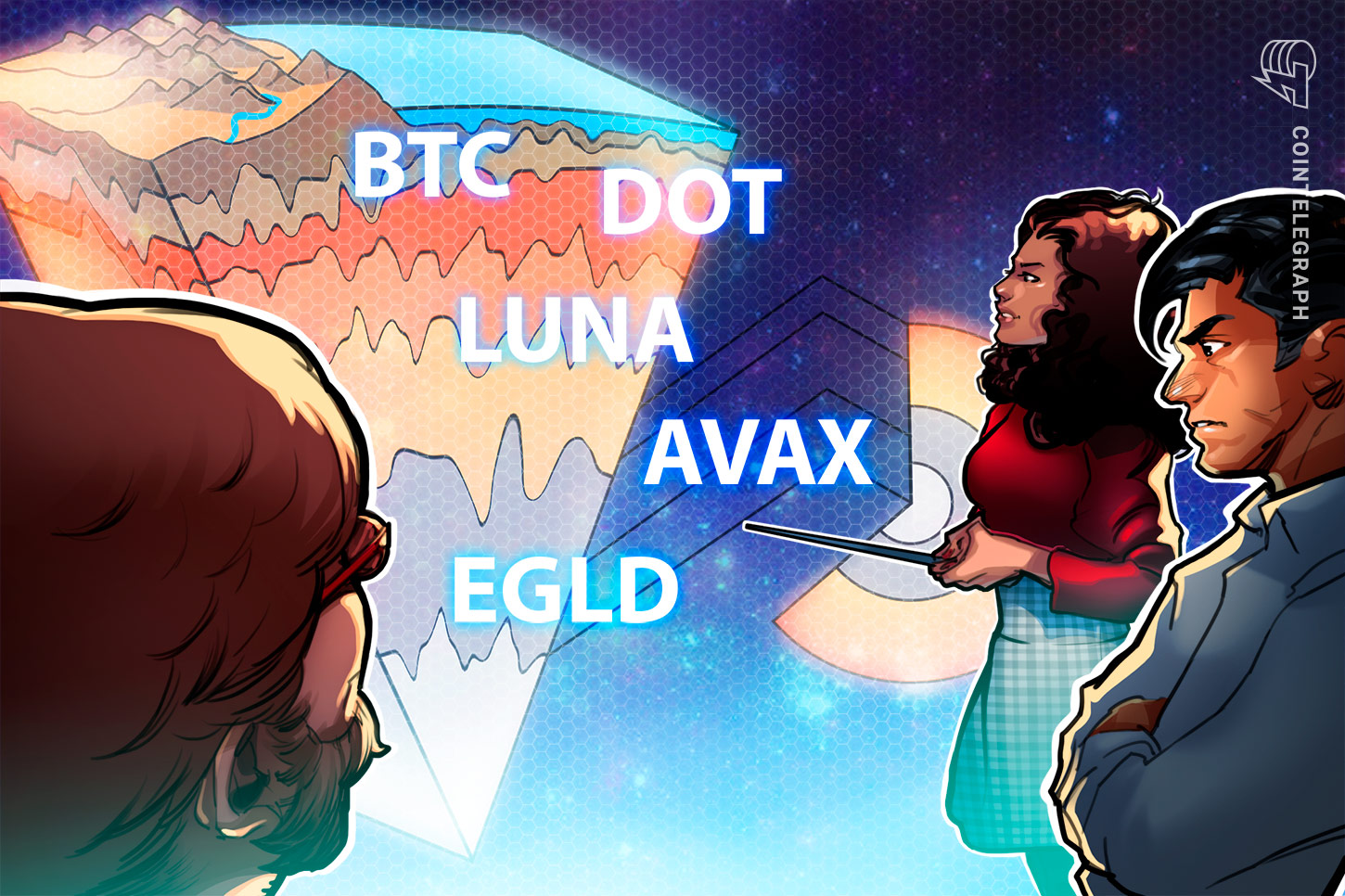 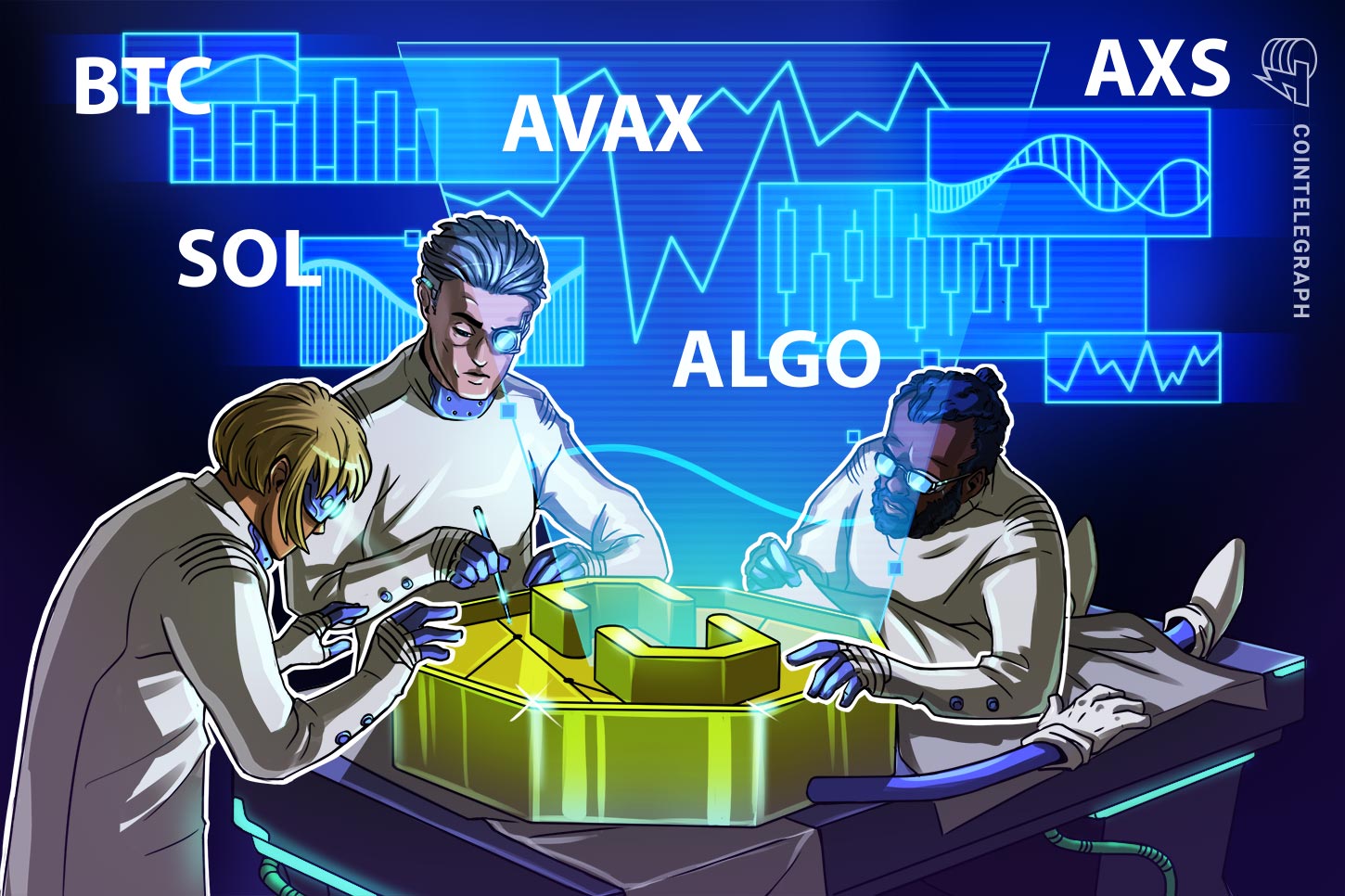 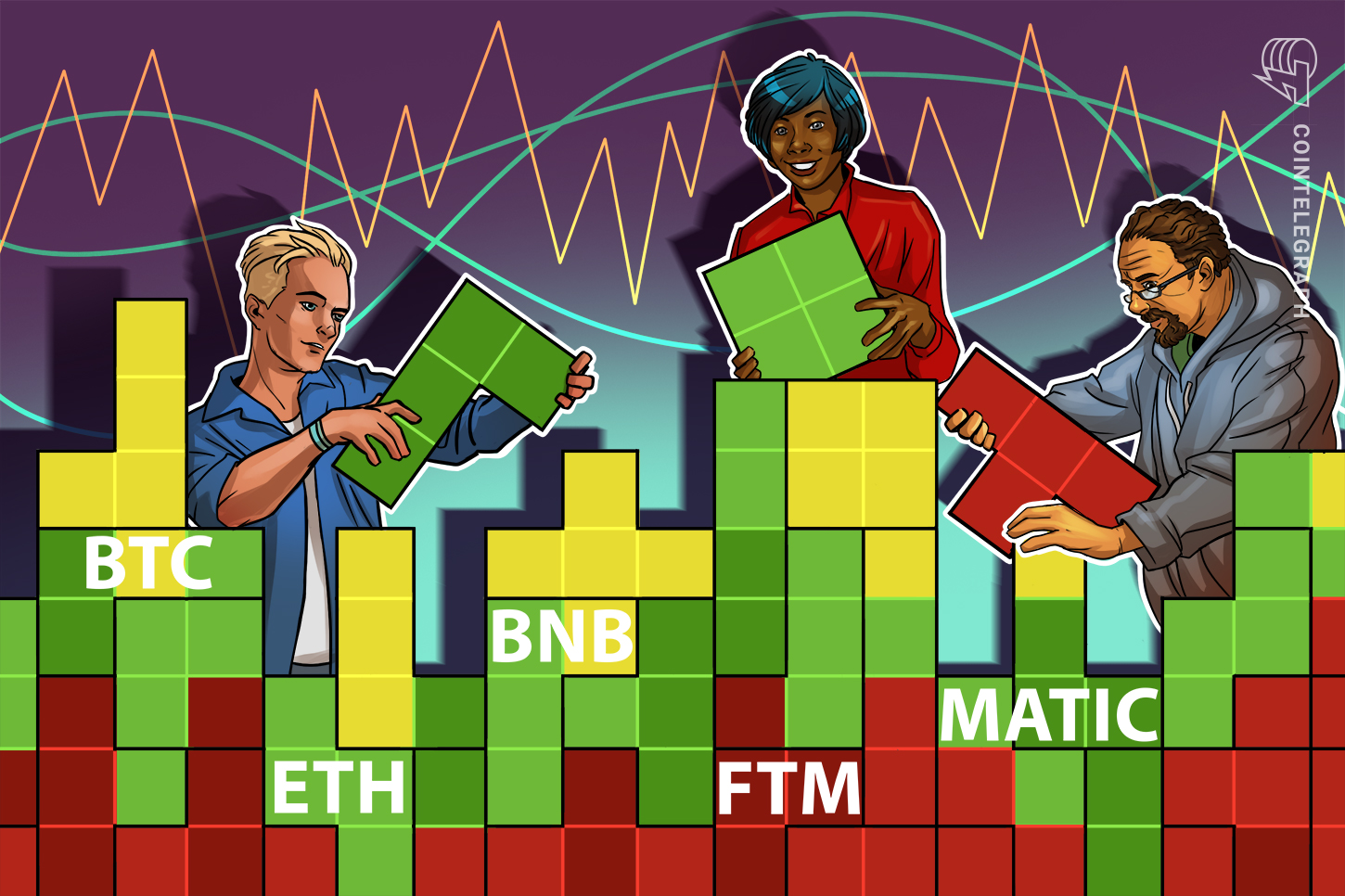