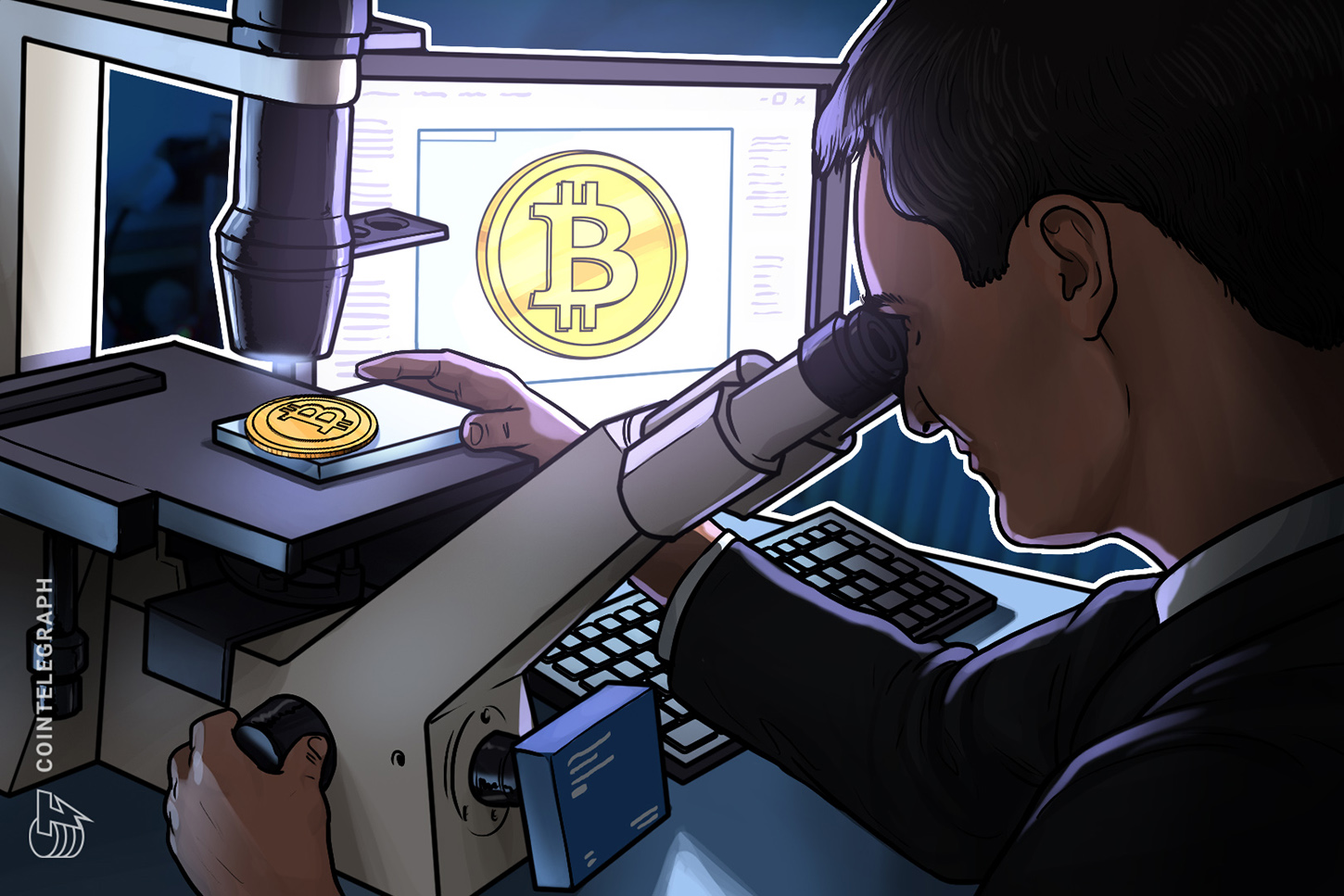 As the largest cryptocurrency by market capitalization, Bitcoin’s (BTC) effectiveness as a medium of exchange is still a matter for debate. Unlike fiat money that is inherently infinite in supply and must be managed by a central bank, Bitcoin is akin to gold in that it is commodity money with a finite supply of 21 million.

However, the supply cap is not the major stumbling block for BTC as a medium of exchange, but rather, the transaction throughput. While Satoshi Nakamoto envisioned Bitcoin as a peer-to-peer electronic cash system capable of facilitating online payments without a central counterparty, seven transactions per second on average is hardly the standard for scalability.

Indeed, scalability is only one of three major metrics required for any currency system to succeed as a medium of exchange along with adoption and liquidity. There is an argument to be made of Bitcoin’s growing adoption around the world across several strata of the global economy.

Price volatility that has seen Bitcoin peak at $58,000 and then briefly fall below the $30,000 mark within the first two months of 2021 likely indicates lingering issues with liquidity. However, it’s important to note that the current period is being characterized by a bullish advance that began in October 2020. Ultimately, some analysts expect Bitcoin’s volatility to level out as more institutions take up positions in the market.

What do the critics say?

Bitcoin’s scalability problem is even older than the network itself. Indeed, upon first proposing the system back in 2008, James A. Donald replied to Satoshi Nakamoto with: “The way I understand your proposal, it does not seem to scale to the required size.”

This astute observation has been at the heart of some of the more contentious and controversial debates within the Bitcoin ecosystem. Disagreements over how to solve the problem have even resulted in multiple hard forks.

These days, when Bitcoin critics cannot definitively dismiss BTC’s store of value proposition, scalability seems to be a low-hanging fruit with which to craft some anti-Bitcoin soundbite. Speaking during the 2021 Daily Journal annual shareholders meeting, Berkshire Hathaway vice-chairman Charlie Munger remarked that Bitcoin will never become a global medium of exchange due to its price volatility.

The 97-year-old billionaire investor is no stranger to espousing anti-Bitcoin sentiments. Indeed, together with Warren Buffett, the two Berkshire Hathaway chiefs have been responsible for some of the more colorful negative remarks among Bitcoin. From being “rat poison squared” to “trading turds,” Munger once slammed BTC investors for celebrating the life and work of Judas Iscariot.

Munger, like Buffett, is among a class of Wall Street Bitcoin critics who have often claimed that Bitcoin has no intrinsic value. However, with the price of BTC continuing its relentless upward advance over the past decade while attracting significant institutional interest, detractors now seem to be left with only the scalability argument.

Even among mainstream crypto adopters, Bitcoin’s inability to scale at the base protocol level also seems to be a significant issue. In an address during the Future of Money conference back in February, Mastercard executive vice chair Ann Cairns declared that BTC was not suited to its crypto payment plans.

According to Cairns: “Bitcoin does not behave like a payment instrument […] It’s too volatile and it takes too long to transact.” As previously reported by Cointelegraph, Mastercard recently announced plans to offer support for cryptocurrency payment on its network.

Together with the 10-minute block creation time, the one-megabyte block size acts as the actual transaction throughput constraint for the Bitcoin network. The block size debate of 2017 that ultimately led to the Bitcoin Cash hard fork proved the adamance of Bitcoin purists to the 1MB block size ethos.

With the “big blockers” now firmly on their own Bitcoin forks like BCH and Bitcoin SV, the question of how to get BTC to scale without changing a thing on the protocol level still lingers. From Bitcoin banks to sidechain protocols, and even deferred settlement infrastructure layers like the Lightning Network, several developmental projects are currently ongoing to make Bitcoin more suitable for microtransactions like paying for coffee.

At a high level, these scaling solutions involve the creation of trustless, centralized (pardon the oxymoron) entities or layer-two networks that maintain lightweight versions of the BTC ledger to handle the actual “coin” transfers without having to maintain the full Bitcoin ledger. These sidechain implementations then transmit the transaction data for final settlement on the actual Bitcoin network.

LN is one of the major Bitcoin scaling solutions under active development by several organizations including Blockstream and Elizabeth Stark’s Lightning Labs. The Lightning Network is perhaps the most popular of the “defer-reconcile” scaling implementations that allow users to create payment channels that offer instant coin transfers at minimal fees.

According to data from LN data aggregator 1ML, there are over 17,300 public Lightning Network nodes and more than 38,400 channels. LN capacity is currently north of 1,100 BTC. 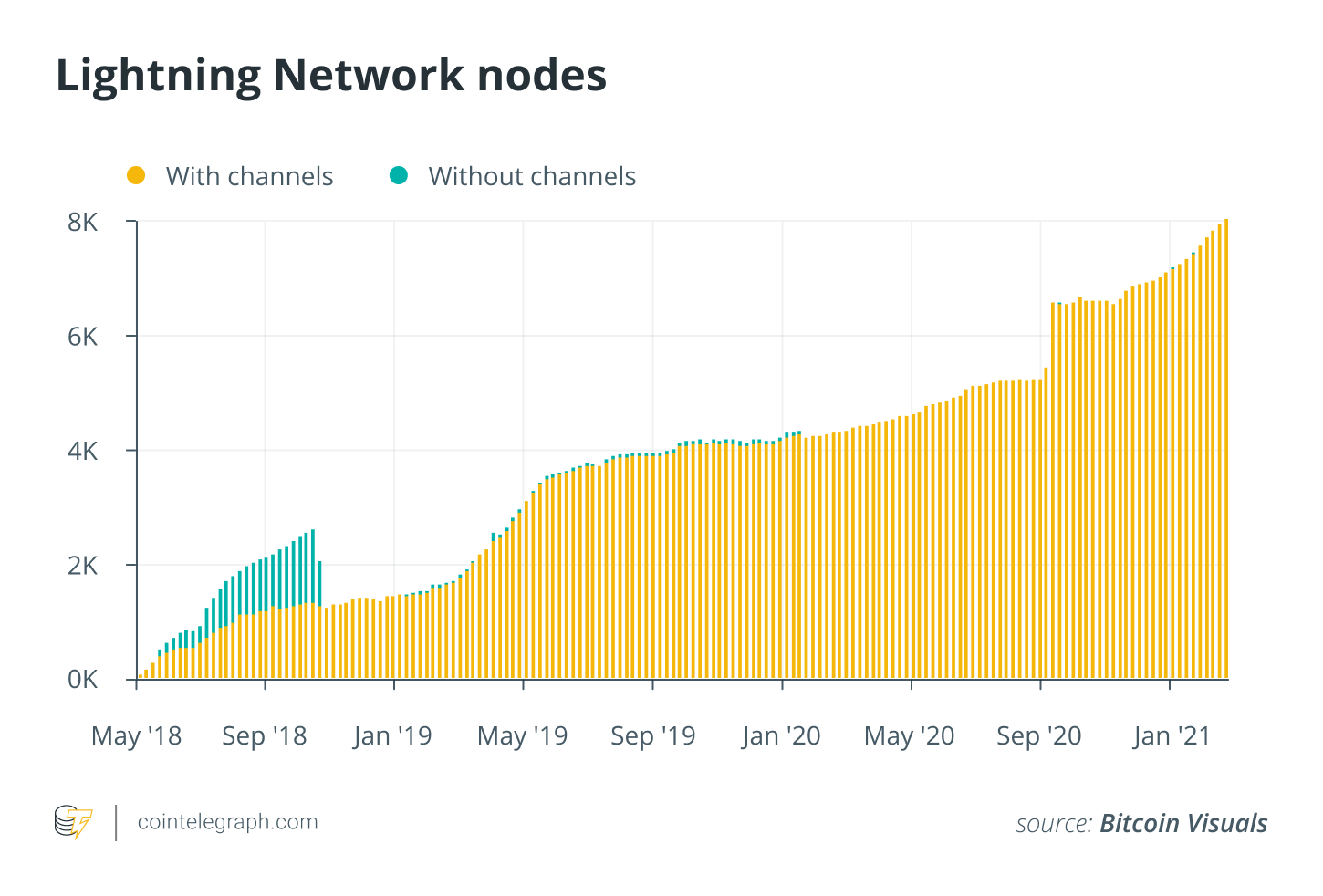 While LN adoption is yet to attain significant heights, layer-two implementation might be about to get a boost with Zap — a Visa-backed Lightning Network payments startup. In February, the company launched Strike — a payments and remittance app that utilizes the Lightning Network for payments.

Strike has also partnered with crypto exchange platform Bittrex to deliver LN-powered payments to over 200 countries around the world. The company plans to issue Strike Visa cards to users in the United States as well as in Europe and the United Kingdom before the end of the year.

There is a school of thought that argues Bitcoin scalability is only possible via layer-two solutions. Ruben Somsen, Bitcoin developer, crypto podcaster and founder of the Seoul Bitcoin meetup, is one of the proponents of this argument.

Somsen is an advocate of Statechains, another layer-two implementation but with a twist — transaction participants send private keys instead of actual unspent transaction output, or UTXO. The process involves loading a Statechain-compatible wallet with the exact BTC sum required for the trade followed by the transfer of the private keys from the sender to the recipient.

Since transferring private keys across the blockchain is fee-less and instant, the Statechain idea seems to have gained some traction within the Bitcoin scalability discussion. However, revealing private keys comes with significant security implications.

Thus, in recent times, the Statechain concept has been modified to include a third entity that acts as an intermediary between the transacting parties. Detailing the workings of this counterparty federation within the Statechain matrix, Somsen told Cointelegraph:

“Statechains allow you to take your coins off-chain (meaning cheap transactions) in a way that puts a minimum amount of trust in others. You have to trust a federation, but the federation won’t know that they are getting partial control of your coins, and they can’t refuse peg-outs (moving back to the Bitcoin blockchain).”

Blockchain infrastructure firm CommerceBlock is one of the companies actively developing Statechains as a viable scalability solution for Bitcoin. The firm is credited with introducing the counterparty federation or “Statechain entity” to improve the security of the system. In a conversation with Cointelegraph, CommerceBlock CEO Nicholas Gregory outlined how Statechains operate:

“At a high level, Statechains are simply a way to transfer your private key to another user. To facilitate this, you have to cooperate with a Statechain entity. However, at all times, the user has full control of their funds; at any anytime, they can withdraw their Bitcoin to their own custody. Therefore, the transfer is instant and private.”

Such a hybrid integration could solve the limited node capacity issue of Lightning Network while ensuring the ability to facilitate multiple microtransactions via Statechains. Since the exact transaction amount is loaded into Statechain wallets, it’s impossible to split UTXOs making Statechain in its present iteration unsuitable for microtransactions.

For Gregory, integrating Statechains with the Lightning Network is among the future developmental plans for CommerceBlock: “Statechains are instant and do not require liquidity lock up; however, you are sending the private key, so you can’t do small or specific denominations. This is where LN excels.”

With these developments and more, the quest for a workable Bitcoin scalability solution is still ongoing. While critics, like Munger, who have been consistently wrong about BTC, continue to drop soundbites, developers are hard at work to solve one of the longest-running operability issues concerning Bitcoin.