Bitcoin has rocketed this week, climbing to a fresh all-time high of around $69,000 per bitcoin after some in the crypto community predicted a "big week"—with the latest bitcoin price rally being put down to higher than expected U.S. inflation.

The bitcoin price has added almost 20% over the last month, climbing partly thanks to hype surrounding the launch of the first U.S. bitcoin futures exchange-traded funds (ETFs). Bitcoin's surge has helped the wider crypto market rally, adding around $500 billion since this time last month. Many smaller cryptocurrencies, including ethereum, Binance's BNB, solana and Ripple's XRP have recorded even greater gains.

Now, bitcoin and cryptocurrency traders are looking ahead to a looming regulator decision expected in the next few days over a fully-fledged bitcoin ETF that would more closely track the cryptocurrency and could see "trillions of dollars" flowing into bitcoin.

The Securities and Exchange Commission (SEC) has until this weekend, November 14, to give the nod to the VanEck bitcoin ETF application, just one of a long line of so-called spot bitcoin ETFs that are lodged with the regulator. Last month, the SEC permitted the first bitcoin futures ETF to begin trading in New York and it quickly became the second heaviest-traded ETF debut on record.

"The growing optimism in bitcoin could be down to the upcoming deadline for the SEC response to VanEck’s spot based BTC ETF on November 14, with traders trying to front-run any good news," Sam Kopelman, the U.K. manager of bitcoin and crypto exchange Luno, said in emailed comments, adding "it's been a good start to the week for the crypto markets."

Despite sky-high expectations among confident bitcoin and crypto traders, some experts are not optimistic.

"I think there is literally zero chance of passage in the next three years,” Dave Nadig, director of research at ETF Trends, told CNBC, pointing to SEC chair Gary Gensler's previous calls for clarity over which regulatory agencies have authority over the nascent crypto market and new legislation passed as part of the massive infrastructure bill that will increase reporting requirements on crypto companies.

However, much of the crypto community think there are reasons to be bullish beyond growing Wall Street acceptance of bitcoin.

"While this recent price rally can be attributed to movements like the approval of the first bitcoin ETF for institutional investors, we can't ignore the impact of significant development and adoption in emerging markets," Ray Youssef, the chief executive of fintech platform Paxful, said in emailed comments.

"More developers are entering the space to build a DeFi stack on bitcoin, the lightning network is seeing a massive rally with the support of Twitter’s Jack Dorsey, and countries like El Salvador have adopted bitcoin as legal tender." 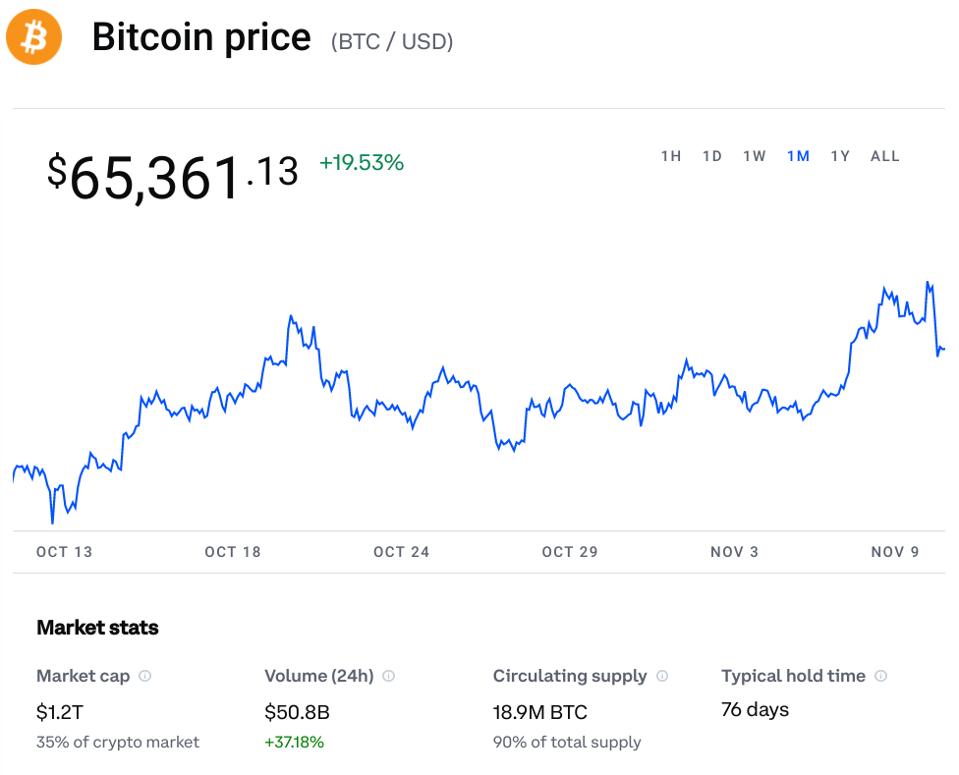 Meanwhile, Kopelman echoed other bitcoin and crypto market watchers who are increasingly seeing ethereum outperform the bitcoin price. Due to the growth of ethereum-based decentralized finance (DeFi) and the ongoing craze for non-fungible tokens (NFTs) that are largely traded on ethereum's blockchain, many have predicted ethereum could eventually surpass bitcoin as the largest cryptocurrency by value.

"Bitcoin’s move comes after a consolidation period of 17 days within the $58,000 to $64,000 range," said Kopelman. "Hot on the heels of bitcoin, ethereum has risen 8% over the last seven days—now increasing at the same rate as bitcoin."