61% Of Goldman Sachs’ Surveyed Clients Are Bullish On Crypto 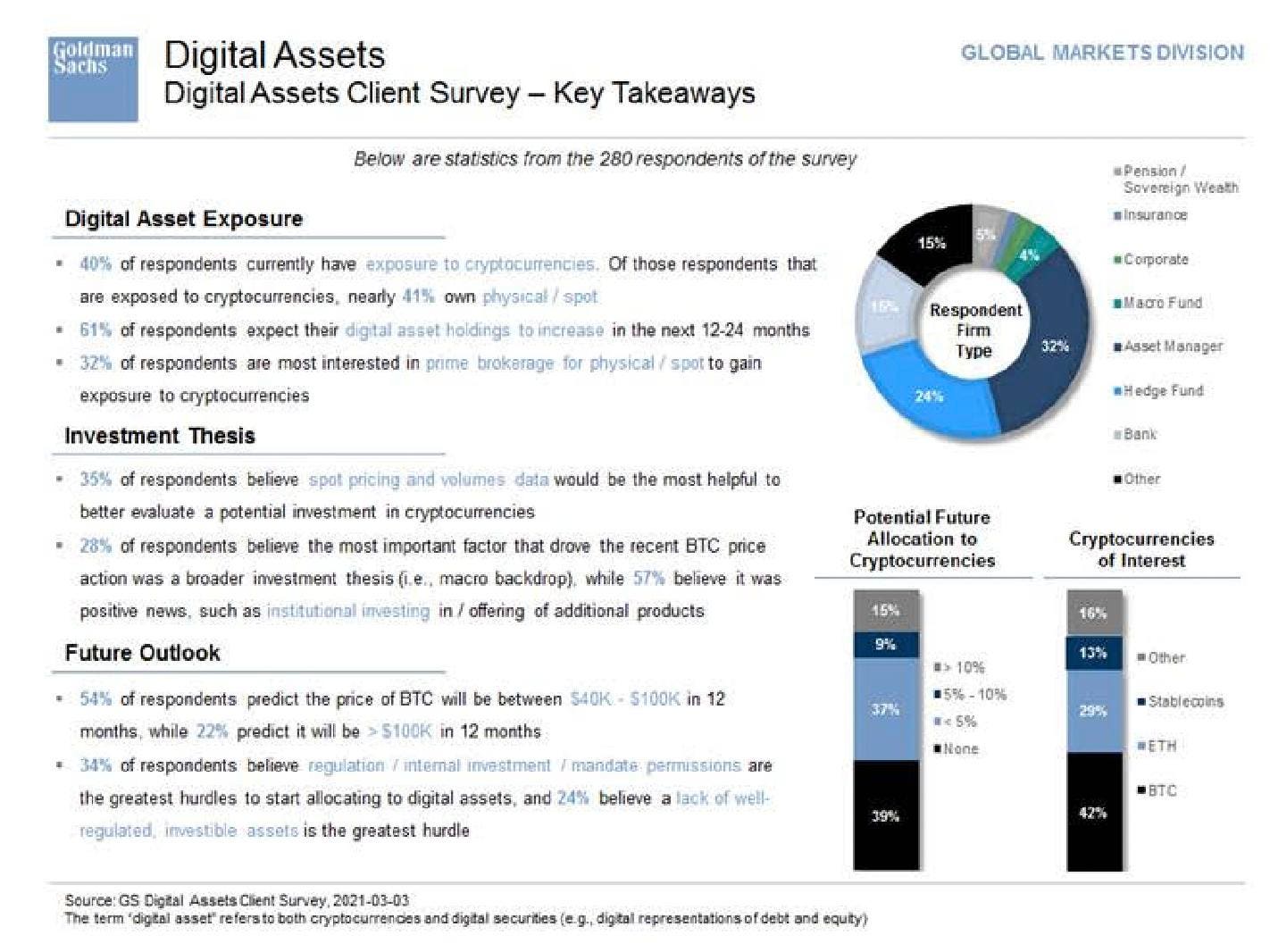 The vast majority of Goldman Sachs’ clients are bullish on cryptocurrencies.

The investment banking giant has posted the results of a client survey finding that 61% of respondents expect their digital asset holdings to increase in the next 12-24 months. 40% of respondents already have exposure to cryptocurrencies.

Notably, 57% of Goldman Sachs’ surveyed clients believe the most important factor that drove bitcoin’s price action was “institutional investing or offering of additional products.” According to bitcointreasuries.org, a site that tracks bitcoin purchases by various types of companies, 22 publicly listed enterprises currently hold more than $7 billion worth of bitcoin. On March 1, MicroStrategy’sbitcoin holdings reached a total of $4.45 billion. Second largest cryptocurrency holder is Tesla, which bought $1.5 billion in cryptocurrency in February. Additionally, PayPal’s 300 million retail customers have gained exposure to bitcoin last October.

News of the survey comes less than a week after Reuters reported that Goldman Sachs has restarted its cryptocurrency trading desk after a three-year hiatus, is within weeks of launching bitcoin futures trading, and is exploring the potential for a bitcoin exchange-traded fund and digital asset custody.

Investors’ positive future outlook is supported further by findings that show 22% of respondents predict the price of bitcoin will be over $100,000 in 12 months and more than half expect the cryptocurrency to stay in the $40,000-$100,000 price range.

Other than bitcoin, 29% of respondents chose ether as the cryptocurrency of interest and 13% picked stablecoins, cryptocurrencies pegged to an external asset, such as the U.S. dollar, to minimize bitcoin’s volatility.

Another key takeaway is a relatively strong investor sentiment around regulation. 34% of respondents cite it as one of the greatest hurdles for cryptocurrency investing and 24% find a lack of well-regulated investable assets to be the greatest barrier.

The survey was based on responses from 280 respondents, including asset managers and hedge funds, which account for the majority of surveyed firms, as well as banks, pension/sovereign wealth funds and others.