AVAX price prepares to launch a new upswing as it hits a new all-time high at $81.50. Avalanche bullish breakout will be confirmed by a closure above the supply zone at $80.

AVAX price bounced off the middle boundary of a descending parallel channel on October 19 to launch an upswing that has seen Avalanche refresh the all-time high (ATH) at $81.50 earlier today according to data from Coingecko. If this upswing is sustained, Avalanche price could rise above the $100 mark.

AVAX price rallied approximately 165% from a low of $30.56 on September 07 to a high of around $81.07 on September 23 mostly fueled by the network raising $230 million in private token sale. This price action was followed by a correction that formed a descending parallel channel on the daily chart.

‘This price correction was halted by support from the demand zone shown by the green band which prevented AVAX from sliding further between October 12 and October 19. This allowed the bulls to regroup and gather the momentum and some investors got in on the dip. What followed was a 51% move upwards that has seen the asset flip the 50-day Simple Moving Average (SMA) from resistance to support and rose above the descending channel prince to hit a new ATH at $81.51.

The AVAX price is hovering at $77.85 at the time of writing and appears set to discover new highs on a journey towards $100. For this to happen, investors should look for a daily closure above the supply zone (red band) at the $80 psychological level. 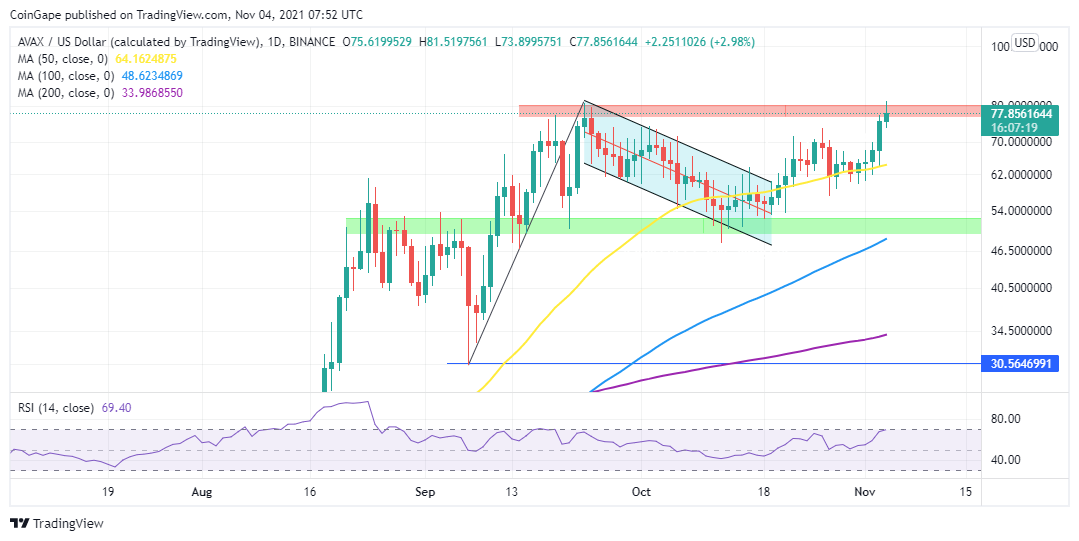 The upsloping moving averages and the entry of the Relative Strength Index (RSI) indicator into the overbought zone shows that bulls are stronger than the bears and are currently in control of the Avalanche price.

Moreover, the daily chart shows that Avalanche price sits on robust downwards provided by the SMAs on the downside.

However, things may go wrong for the bulls if AVAX price turns down below the supply zone at $76.90. If this happens, Avalanche may drop the $70 support wall. A slip further could see AVAX drop to tag the $68 support or the 50-day SMA at $64.16.