Following a sudden massive crash to $56,000, bitcoin has bounced off and reclaimed $60,000. Most altcoins have marked fresh gains as well, with Ethereum finally painting a new all-time high at $4,400.

Since last week’s all-time high, when BTC tapped $67,000, the price of the cryptocurrency was gradually declining. This resulted in several dips below $60,000 before the bulls attempted another leg up. However, that one was halted at $64,000, and bitcoin started losing value again.

As reported yesterday, the asset struggled below $60,000 when a rapid price pump drove north with several thousand dollars. When it all seemed to be going well, though, the situation changed vigorously.

In a matter of minutes, bitcoin slumped below $56,500, which became the lowest price level since October 13th. Interestingly, BTC recovered just as rapidly and reclaimed $60,000. As of now, the cryptocurrency stands just shy of $61,000, and its market capitalization is at $1.150 trillion.

The most significant news coming from the altcoin space is Ethereum’s new all-time high. Just yesterday, the second-largest crypto briefly dumped below $3,900. However, the tides quickly changed, it started to increase in value rapidly, and earlier today tapped $4,400 (on Bitstamp), thus breaking its previous record from May.

Binance Coin is also well up for the day. A 4% increase has driven BNB to nearly $500. More minor gains come from Solana, Polkadot, Terra, Chainlink, and Avalanche.

In contrast, Cardano and Ripple have marked slight decreases. Dogecoin, which reclaimed its position as the 9th largest cryptocurrency from Shiba Inu yesterday, has lost 6% now and stands below $0.3.

Polygon has also seen an impressive price pump of 7.5%, and MATIC now trades above $2.

The cryptocurrency market cap is up by $60 billion since yesterday and is now at $2.6 trillion. 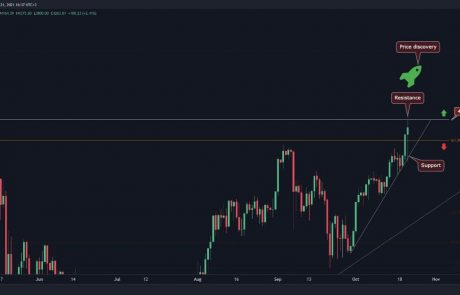 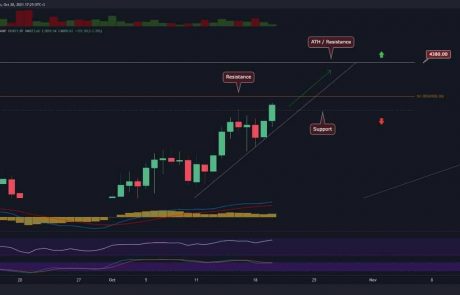