Ripple price hovers at $1.0859 with a neutral bias even as the Ripple vs. SEC lawsuit continues to drag. Both parties continue to make compelling arguments as many in the cryptocurrency community believing that Ripple has an upper hand.

Coinbase CEO Brian Armstrong has joined the growing support for Ripple against the SEC claiming that the blockchain company’s performance on the lawsuit is better than expected. As a result, the Ripple community has come out strongly demanding that Coinbase relists XRP.

In the meantime, XRP risks massive losses if it fails to hold onto crucial support. The price of the international remittances token must hold on to this line of defence to avoid plunging to $0.5784.

Ripple price has spelt out a symmetrical triangle pattern on the daily chart, indicating that the bullish and bearish pressures are generally cancelling out. The horizontal price action points to decreasing price volatility hinting at a possible breakout in either direction in the near term. This is validated by the horizontal movement of the Moving Average Convergence Divergence (MACD) indicator close to the neutral line.

Ripple price is holding on to its last line of defence at $1.0586, where the 50-day Simple Moving Average (SMA) coincides with the support line of the governing pattern.

Failing to hold the XRP price above the aforementioned support level could mean trouble for the bulls, as Ripple would be susceptible to further losses, dropping 46% towards $0.5784. 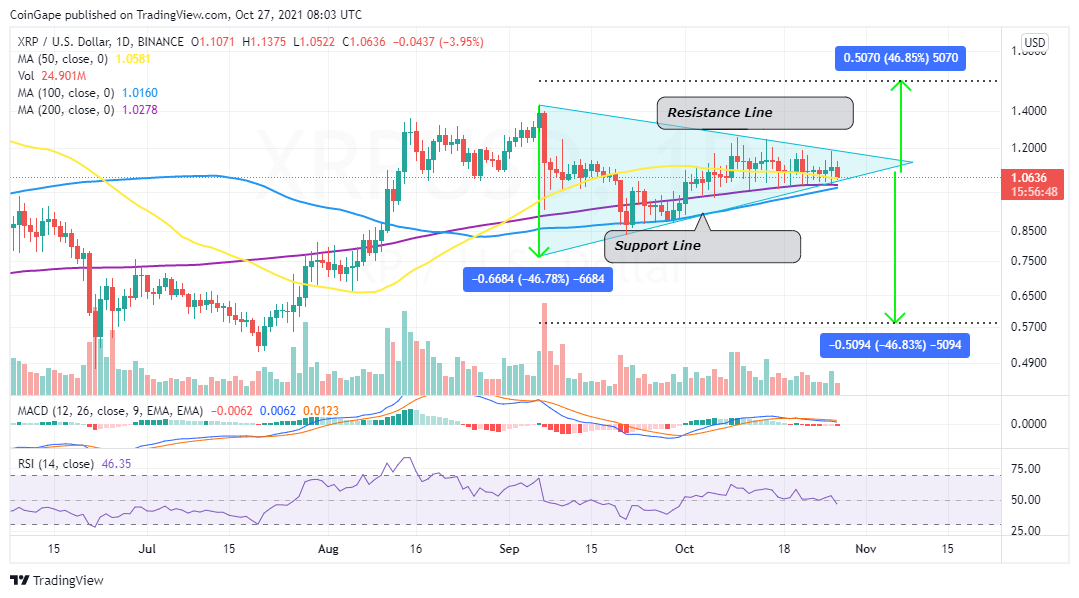 On the flipside, should Ripple price favour the bulls, and break out above the immediate resistance at $1.10, the odds of XRP/USD moving upwards to hit the 46% upswing to $1.5890 will be increased.

However, before the cross-border remittances token reaches this target, it has to overcome a number of obstacles along the way.

The first hurdle is at $1.1411 major resistance level and the second is at $1.1615. The last resistance is the $1.20 psychological level which coincides with the resistance line of the governing chart pattern.

Until XRP price slices above the upside resistance trend line of the governing technical pattern, the recovery will have to wait a bit longer.

XRP Price Analysis: Ripple Rejection From $1.2 Closes In On $1 As More Declines Beckon

XRP Price Analysis: XRP Price Knocks on $1.3 resistance, Is A Parabolic Move Up on Cards?