Without a doubt, Shiba Inu (SHIB) price is now making waves to flip the popular meme coin – Dogecoin (DOGE) that has been staggering since its peak on May 8. Shiba Inu (SHIB) dubbed as Dogecoin killer currently has the biggest circulating supply, having gained prominence among users, and has become one of the most traded cryptocurrencies on Binance and Coinbase.

Recent news had it that a unique burning mechanism was set up as 900 million Shiba Inu were burned leading to a 16% growth in price. This will likely continue, as trading pairs and pools are given the condition to purchase and burn $SHIB to get listed on their DEX, Shibaswap.

Shiba Inu also plans on introducing Utility to their ecosystem, as the development of the Shibarium Blockchain, shiboshi games, and Shiba Inu stable coin (SHI) is underway.

While development like ShibaNet is already set for use, for smart contracts and automatic royalties.

Lastly, news speculates about Robinhood listing Shiba Inu. This could be an accelerating factor to the ongoing astronomical heights of the Shiba Token($SHIB).

Let’s move on to analyze the price charts of the SHIBUSDT.

Last weeks’ hidden inside-bar candlestick pattern [11 October ’21] confirmed an increase in demand for the SHIB token after an earlier breakout of the bearish expanding channel that kept the price in a range for about thirteen weeks.

We expect a bull-trap signal if the current week closes above last week’s high. Such a signal in combination with other reversal chart setups on the lower time frames could signal a sharp price pull-back of the SHIB token price. 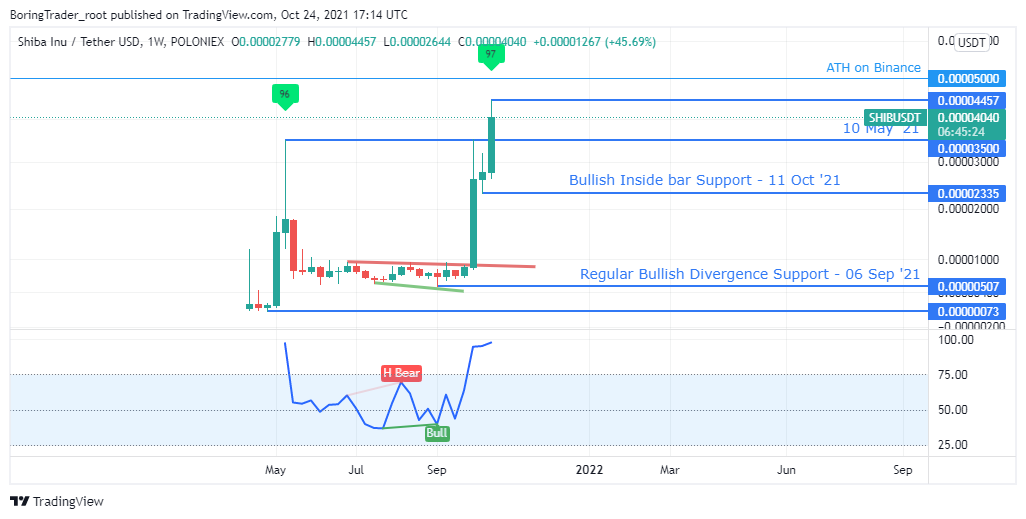 The hidden bullish divergence pattern on 15 October above alongside the bullish inside bar identified on the weekly time frame was instrumental to the recent surge in the price of the SHIB token beyond the significant 0.000035 resistance.

An increase in bullish momentum could see the SHIBUSDT shoot for the 0.000050 resistance. However, a long-ranged bearish divergence is anticipated if the RSI values fail to breach the 99.7 mark. 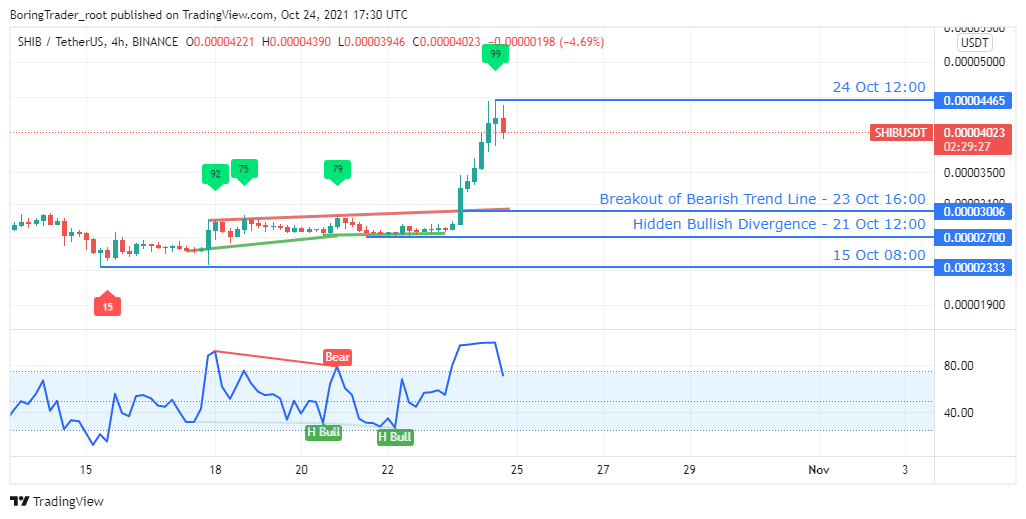 A breakout above the bearish divergence resistance on 23 October 16:00 triggered the decision to scale up on existing bullish positions of the SHIBUSDT.

High RSI readings at level-99 alongside a hidden bullish inside bar candlestick formation at press time hints that the bulls may be exhausted, and early buyers may want to take some profit off the table.

A counter hidden-bullish divergence may send the SHIB price into an upward trajectory towards the 0.00005 round-number resistance if we can see RSI values below level-45.82.