Tonight, on The Andy Milonakis NFT Show: On a whim, our hero sold this M2 Mutant for .01 ETH. In this episode, we’ll deal with the aftermath of that decision. Was this a publicity stunt of some sort? Not at all. Milonakis’ reasons to do so are the following, “I could have gotten another Baby Kongz or a rare Sup Ducks :( But I like doing crazy sh*t sometimes it feels nice. Experiences over money. I will remember this weird, stupid experience more than I will the money that I lost.”

That makes sense. However, as the community told him, a bot probably got his one-time offer. After some reflection, Milonakis sent the robot this note:

For the people that are mad a bot got my M2 for .01. I sent him another NFT as a note. pic.twitter.com/7PohxJUxbk— Andy Milonakis (@andymilonakis) September 29, 2021

Anyway, let’s listen to this show’s theme song as the credits roll.

He really did do it. This transaction will live forever in the blockchain.

Ok here's the official picture, then I shut up for tonight. pic.twitter.com/jjDMDi03WS— Andy Milonakis (@andymilonakis) September 29, 2021

The NFT community went hard on him at first. Example 1. Example 2. Example 3. Example 4. Hilariously, Milonakis responded with “Regret by Andy Milonakis. A series of 20 original photos.” He sold them all on the same day.

And he recorded this video message to let his NFT holders know that when he drops his “main series,” they’ll get a free piece. This applies to anyone that bought the first hand-drawn NFT series, the Inedibles photos, and this Regret series.

Info for people who have any of my NFTs, and thanks pic.twitter.com/hw2BRSISaA— Andy Milonakis (@andymilonakis) September 29, 2021

Since Andy Milonakis is a born winner, the result of this whole stunt was a net positive for him. He lost 6.18 ETH on the transaction and made 6.44 ETH with the picture series.

Moving on, Andy keeps playing with the NFT movie idea. What about this option?

Plus, on the collector side of things, he keeps investing and investigating.

World of Women are fucking hot. I got drunk last night and i was gonna buy one but I ended up with an Octohedz. Octo might be more of a money maker but I neeeeeeed to get a World of Women next— Andy Milonakis (@andymilonakis) September 30, 2021

He ends up getting this one, from World Of Women

And the NFT world finally collided with Milonakis’ real life

First person that came up to me about NFT’s in real life just happened at the sushi bar. Guess which NFT I had in common with him ????— Andy Milonakis (@andymilonakis) October 1, 2021

The answer to the question he asks is: Creature World.

To top it all off, our man gives you all the alpha you were waiting for: The CyberKongz discord community is where is at!… however, that project’s floor is currently a whopping 115 ETH.

Congrats, and big shout out to this community, the very last item in my wallet that I would sell is my baby kongz. You guys in the discord are helping me so much be a comfortable buyer/collector because of all the sweet alpha. 10/10 https://t.co/bflAss8ref— Andy Milonakis (@andymilonakis) October 2, 2021 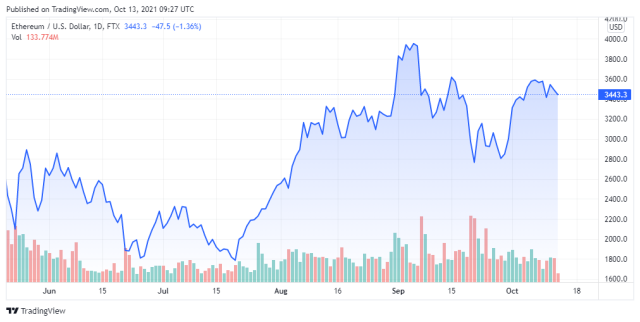 Remember that we told you that the Gutter Gang was doing dogs and pigeons? Well, these are the ones Andy got:

Wow, really happy with both of the ones I got pic.twitter.com/UqU3rjI9Wv— Andy Milonakis (@andymilonakis) October 2, 2021

And, remember that Milonakis gifted a Gutter Gang Mint Pass in his Twitch stream? Well, this is the dog that the winner got:

Also, remember that Andy is getting NFT gifts left and right? Well, he got a piece for free that is now worth 5 ETH. This piece:

ok so @BadBunniesNFT sent me an unsolicited NFT 11 days ago (thanks by the way) It's now worth almost 5ETH. Probably the dankest out of all my NFT gifts, 5 ETH fuck I wanna sell it but also I love it and I feel bad, like a bad bunny. It has a poptart toaster head. NOT AN AD pic.twitter.com/KNEvZ22SjX— Andy Milonakis (@andymilonakis) October 3, 2021

To finish this recap, remember that Andy was getting an Anonymice tattoo if the project doesn’t reach a 10 ETH floor by the end of the month? Well, they got there in a few days:

Welp, no tattoo for now. 8-9 days in. I gave it a month. FUCK YES. Congrats to @AnonymiceNFT for making a sick ass project and all the people who I grinded and staked with for the first few days to get extra free mice. Next up — Breeding https://t.co/AgbkRdsfLF pic.twitter.com/8WFBNYF9WH— Andy Milonakis (@andymilonakis) October 5, 2021

There are no two ways about it, our hero wants to be a part of the Bored Ape Yacht Club. He profited from the Cyberkongz babies, from the Bears Deluxe, from the Cryptoadz, and who knows from what else. What’s his plan? To flip some of them and get a BAYC.

.79 eth to 1/3rd of a BAYC in a week. I just need to ape in a little heavier on some of these new projects so I can collect the profit and still have a decent amount of the NFTs left. Then I can do a flip with a clean conscience— Andy Milonakis (@andymilonakis) October 3, 2021

And since you all love lists, here are Andy’s most profitable investments:

This episode ends with a video. Andy can’t sleep and so can’t you.

The NFT world is just too exciting. It will keep you up all night.