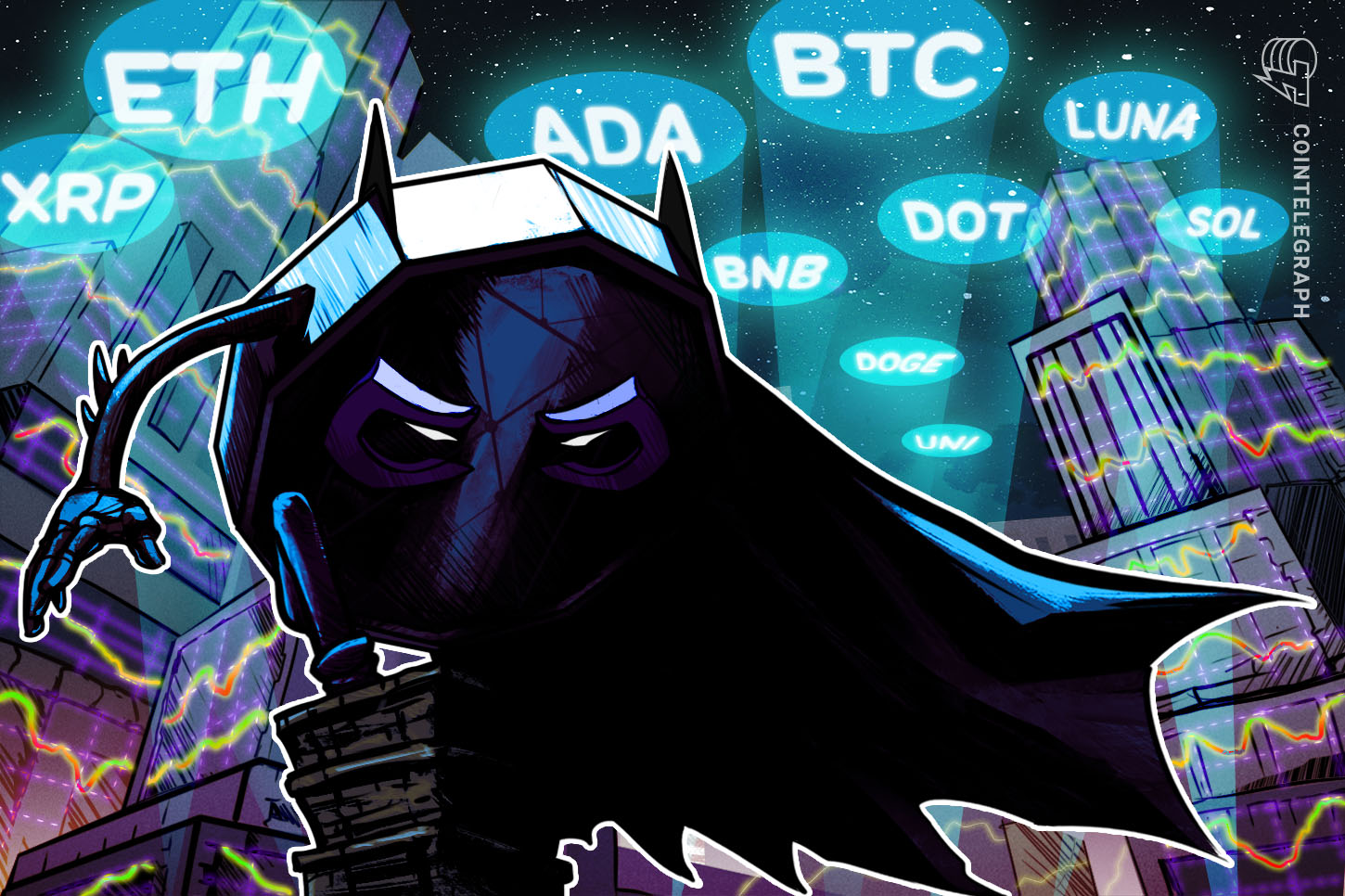 Bitcoin’s (BTC) recovery is facing stiff resistance near $48,500, indicating that bears are active at higher levels.

By combining the popular stock-to-flow Bitcoin price model and the illiquid supply data, analyst William Clemente projects $39,000 to act as a strong floor on any declines.

On the upside, analysts remain bullish. Bloomberg Intelligence chief analyst Mike McGlone has maintained his target of $100,000 for Bitcoin. McGlone said that a number of different charts underline the bullish potential for Bitcoin. 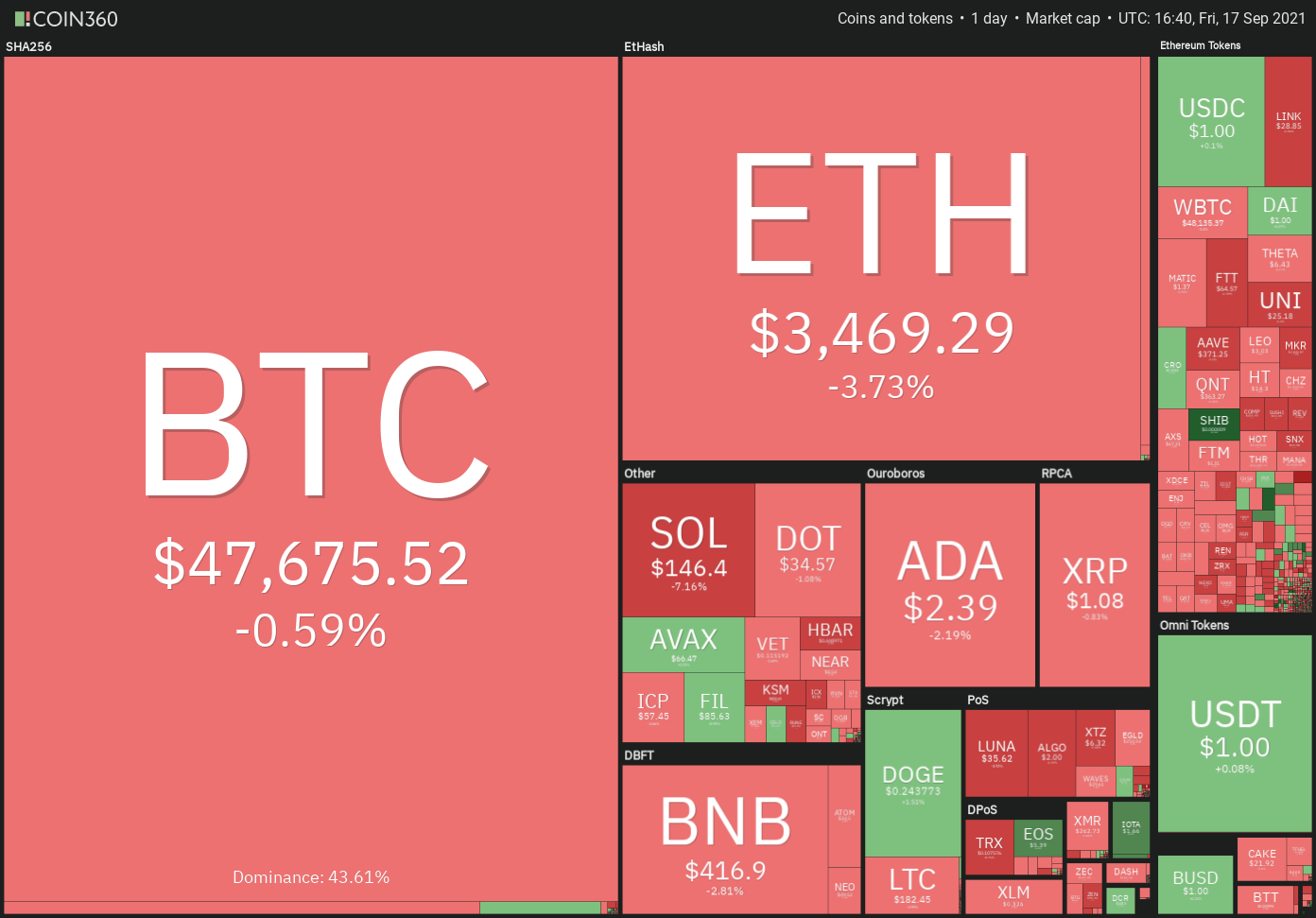 Along with Bitcoin, Ether (ETH) is also showing signs of accumulation. Crypto analytics provider IntoTheBlock said $1.2 billion worth of Ether was withdrawn within a 24-hour period from centralized exchanges on Sept. 16. After a similar occurrence in April, Ether had rallied about 60% in 30 days.

The bulls are attempting to sustain Bitcoin above the 20-day exponential moving average ($47,291) while bears are trying to pull the price below it. The 20-day EMA has flattened out and the relative strength index (RSI) is close to the midpoint, suggesting a range-bound action in the short term. 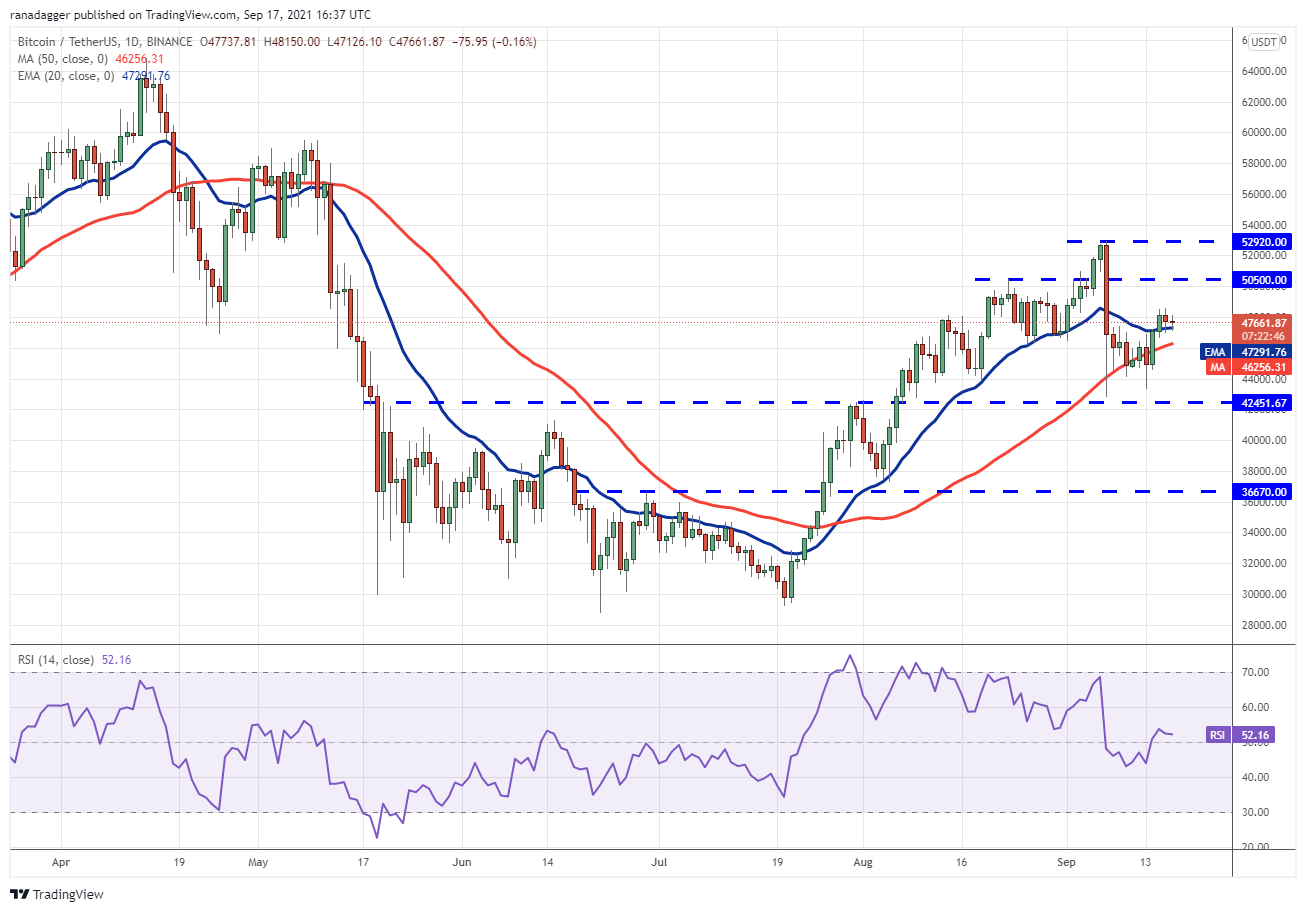 If bears sink the price below the moving averages, the BTC/USDT pair could drop to the critical support at $42,451.67. A rebound off this level will indicate that bulls are accumulating on dips. That may extend the consolidation between $42,451.67 and $52,920 for a few more days.

On the contrary, if the price rebounds off the current level or the 50-day simple moving average ($46,256), the bulls will try to push the pair to $50,500 and then to $52,920. The bears are likely to defend this resistance zone aggressively.

Ether’s (ETH) recovery is facing stiff resistance at the 61.8% Fibonacci retracement level at $3,637.14, indicating selling at higher levels. The bears are attempting to sink the price back below the support at $3,377.89. 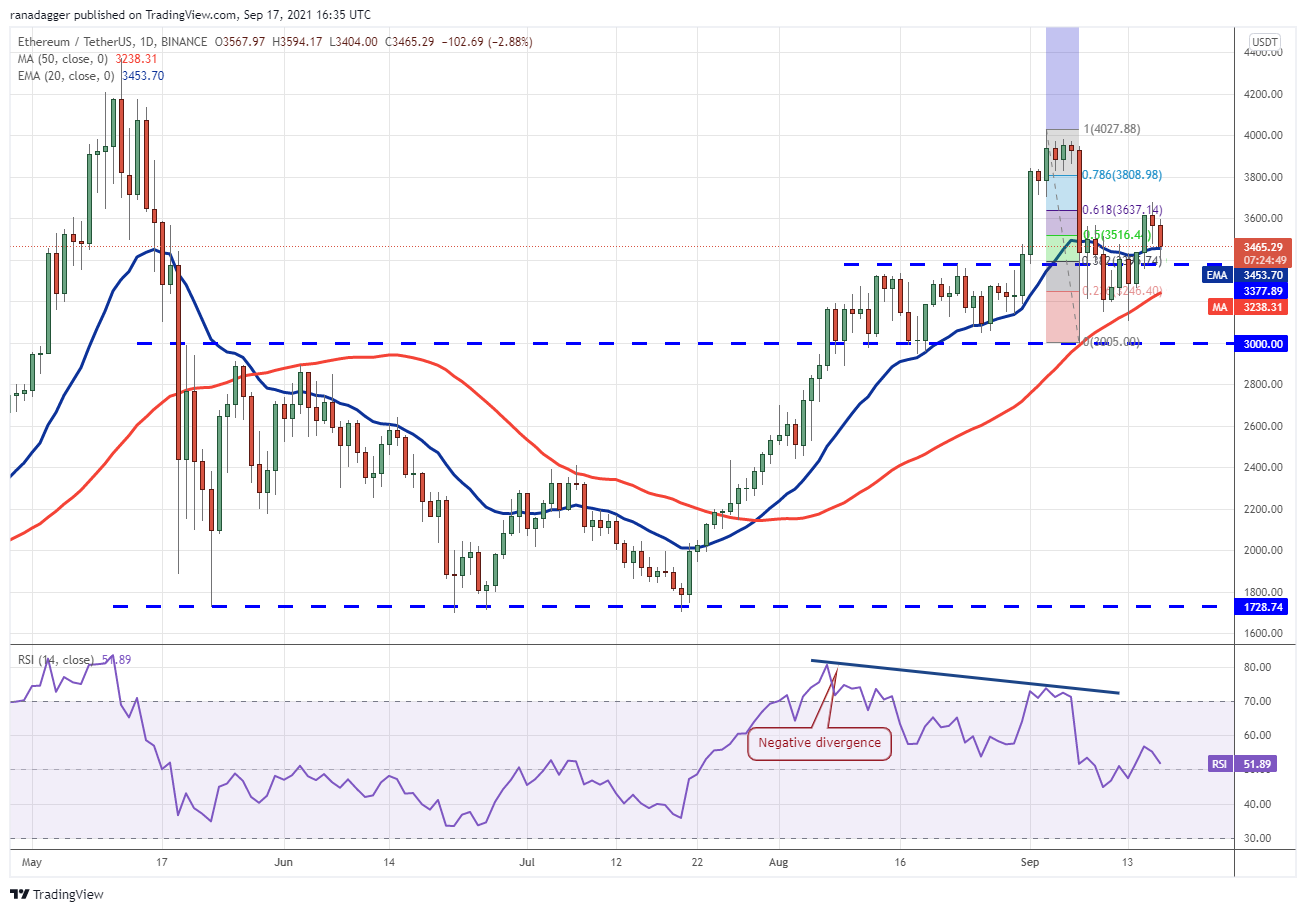 If they succeed, the ETH/USDT could drop to the 50-day SMA ($3,238) and then to the critical support at $3,000. Such a move may result in the formation of a head and shoulder pattern, which will complete on a break and close below $3,000.

The flattish 20-day EMA and the RSI just above the midpoint do not indicate a clear advantage either to the bulls or the bears.

Cardano (ADA) turned down from the 20-day EMA ($2.52) on Sept. 16 suggesting that bears are selling on rallies to this resistance. The bears are currently attempting to pull the price to the 50-day SMA ($2.25). 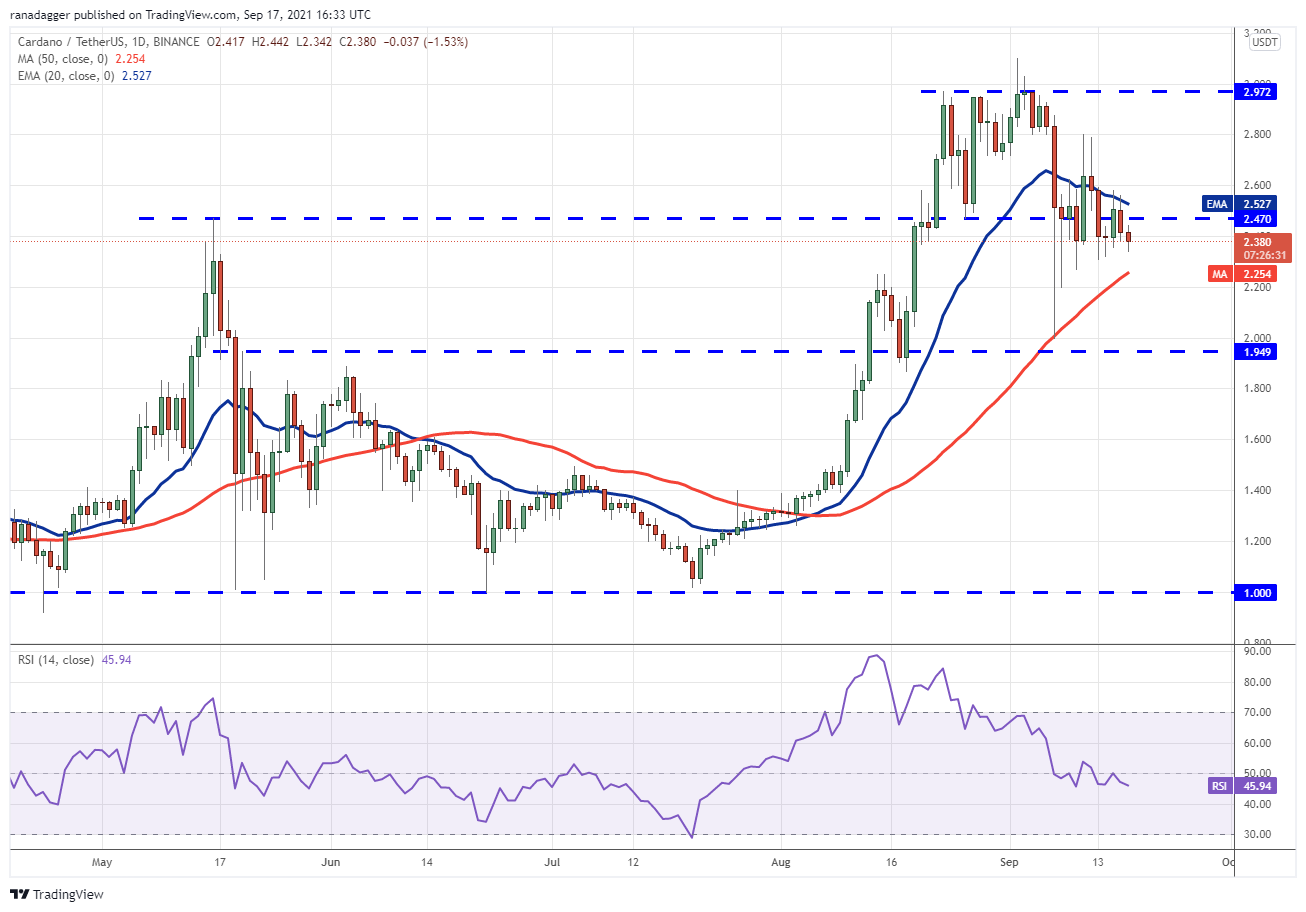 The downsloping 20-day EMA and the RSI in the negative zone suggest that bears are in command. If the price sustains below the 50-day SMA, the ADA/USDT pair could drop to the next support at $1.94.

Such a deep correction will suggest that a short-term top has been made. If bulls want to salvage the uptrend, they will have to push and sustain the price above the 20-day EMA. If they do that, the pair could once again rally to $2.80 and then to $2.97.

The bulls failed to push Binance Coin (BNB) above the 20-day EMA ($432) in the past two days, indicating that buying dries up at higher levels. This may have attracted profit-booking from short-term traders who bought at lower levels, anticipating a resumption of the up-move. 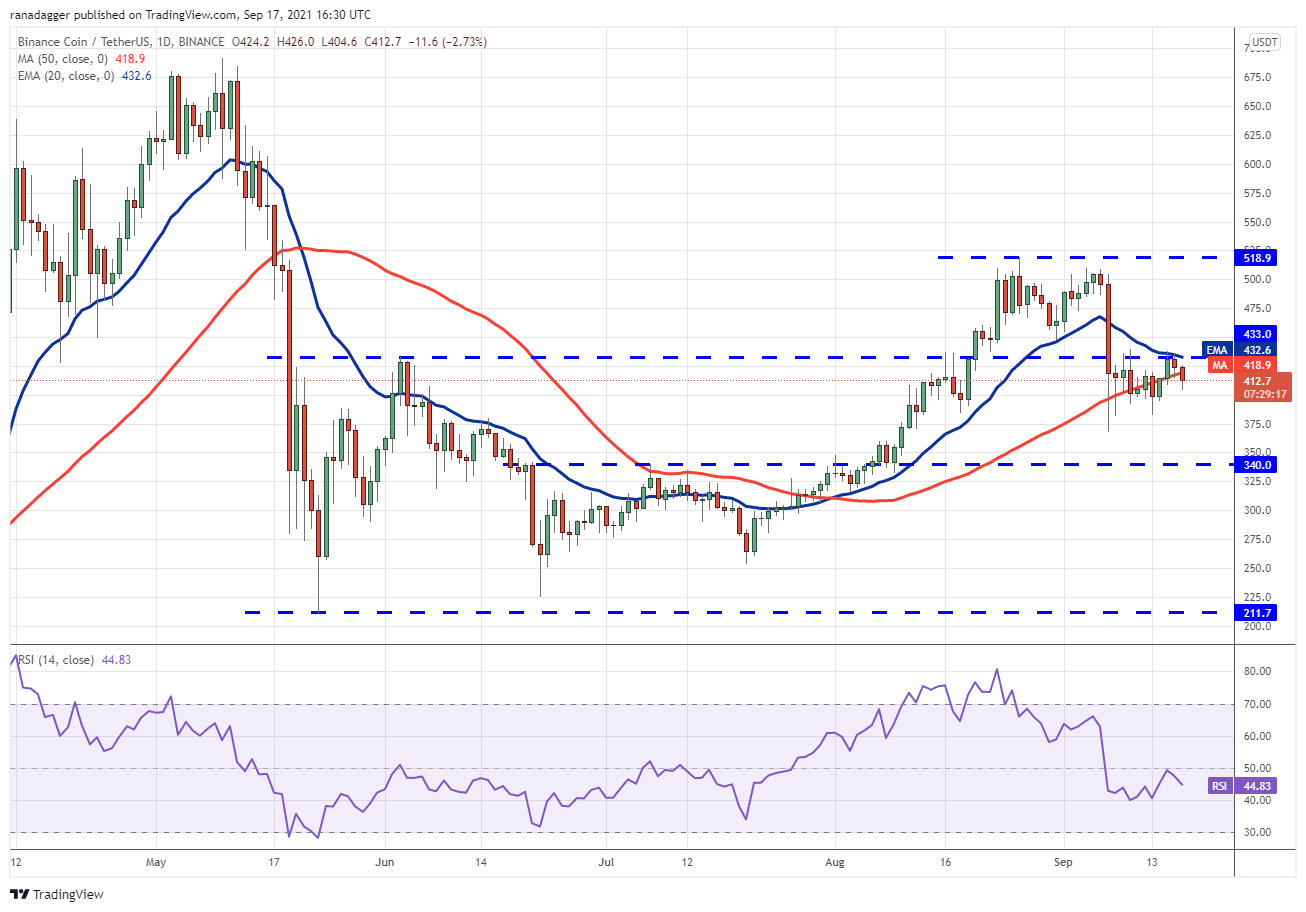 The 20-day EMA is sloping down and the RSI turned down from the midpoint, suggesting advantage to the sellers. If the price sustains below the 50-day SMA, the BNB/USDT pair could drop to the next major support at $340.

This negative view will be invalidated if the bulls push and sustain the price above the 20-day EMA. Such a move will suggest that the bulls have absorbed the supply. The pair could then rise to the overhead resistance at $518.90.

XRP turned down from the 20-day EMA ($1.12) on Sept. 16, indicating that bears are defending this level aggressively. The downsloping 20-day EMA and the RSI in the negative zone suggest that the path of least resistance is to the downside. 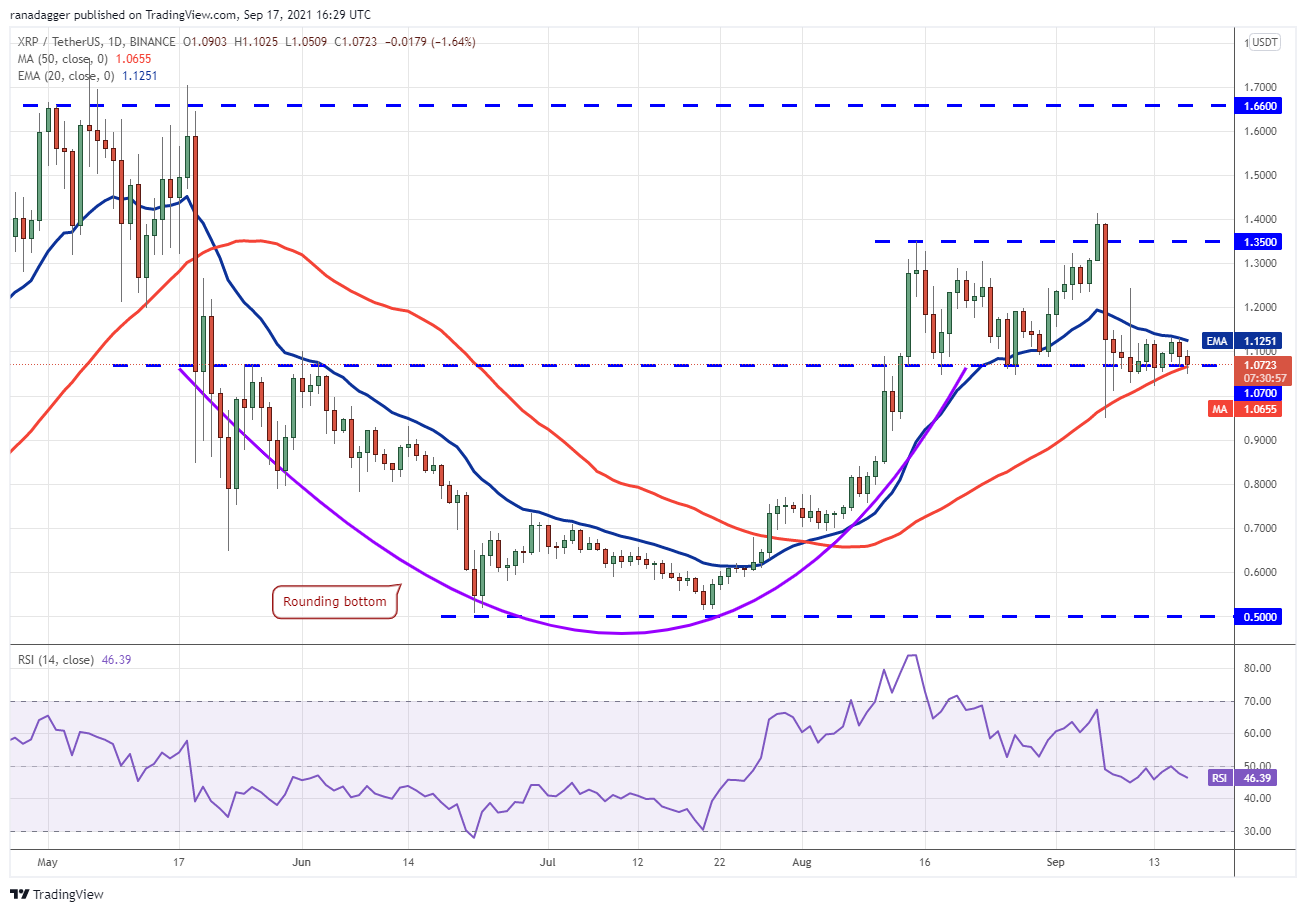 If bears sustain the price below the 50-day SMA, the XRP/USDT pair could retest the Sept. 7 intraday low at $0.95. A break and close below this support will open the doors for a deeper correction to $0.75.

If the price rebounds off the current level or from $0.95, the bulls will again try to push the price above the 20-day EMA. If they succeed, it will suggest that the correction could be over. The pair may then start its northward march toward $1.35. 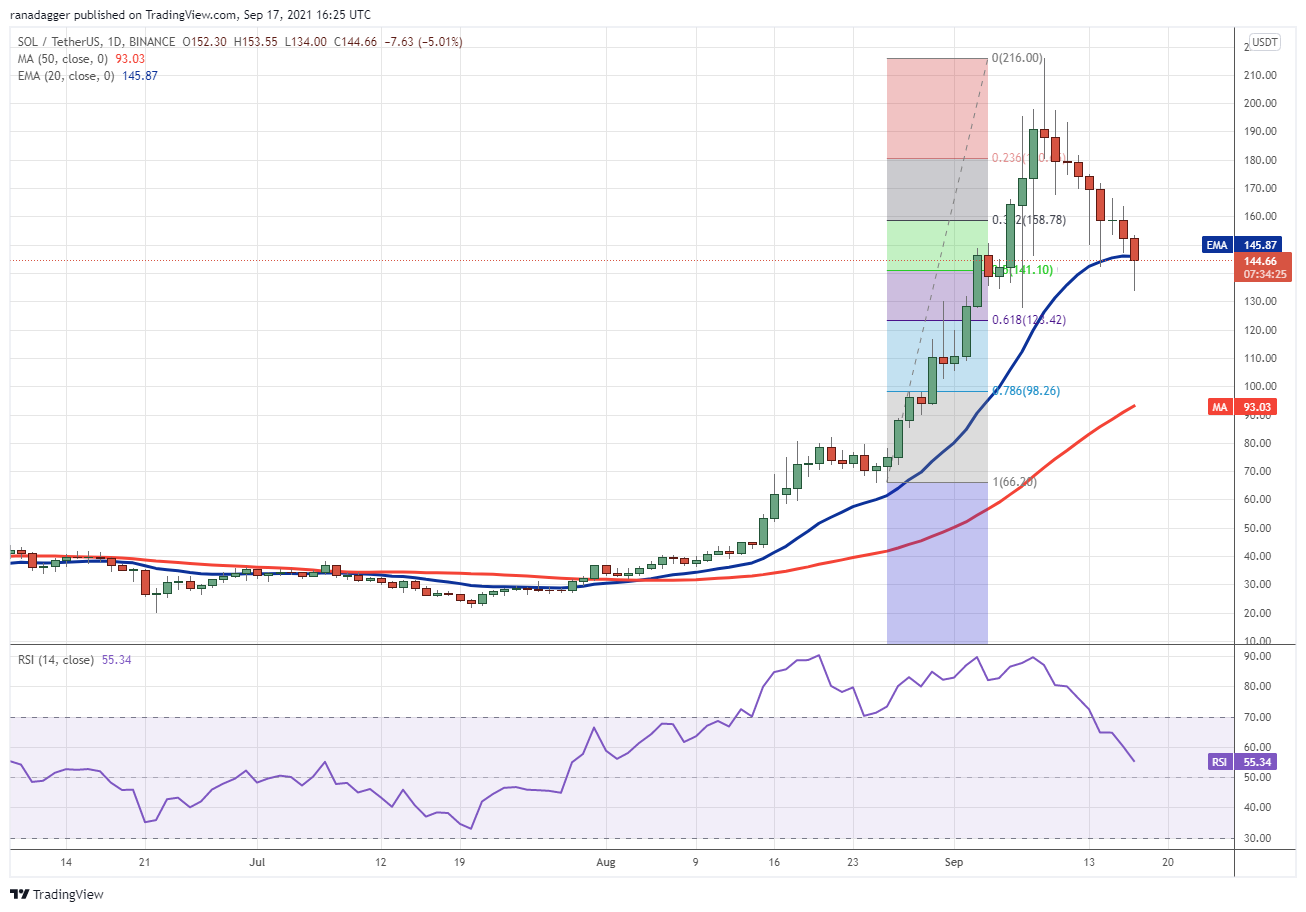 The flattening 20-day EMA and the RSI just above the midpoint suggest that bulls have lost their grip. If bears sustain the price below the 20-day EMA, the SOL/USDT pair could decline to the 61.8% Fibonacci retracement level at $123.42.

This is an important support to watch out for because if it cracks, the pair could plunge to psychological support at $100.

Conversely, if the price turns up from the current level or rebounds off $123.42, the bulls will try to resume the uptrend. The up-move could face stiff resistance near $170 and then at $200.

Polkadot (DOT) turned down from the resistance line on Sept. 15 and dropped close to the 20-day EMA ($32.04) today. This is an important level for the bulls to defend because a break below it could pull the price down to the 50-day SMA ($26.36). 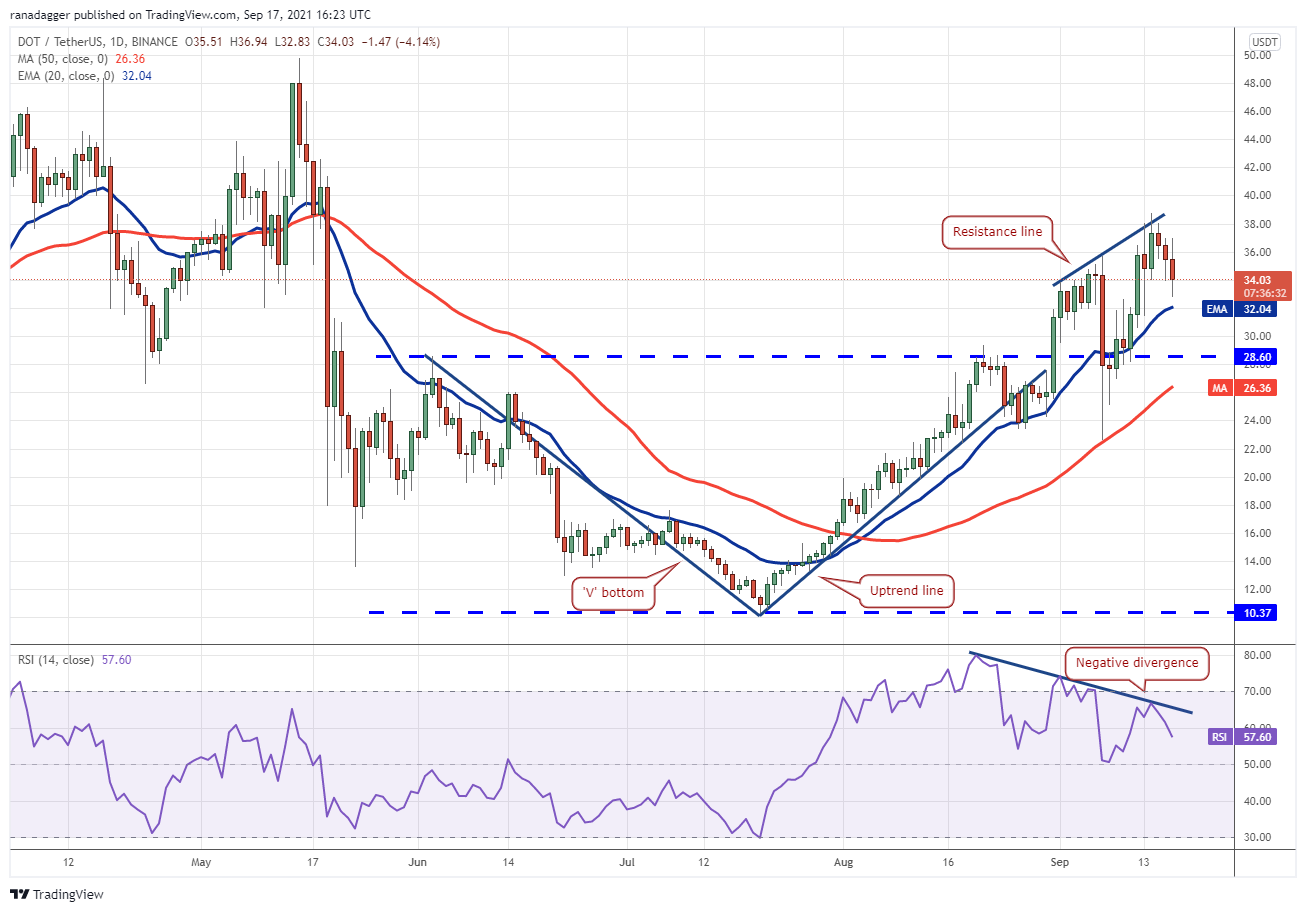 Although the moving averages are sloping up, the negative divergence on the RSI warns that the bullish momentum could be slowing down. A break and close below the 50-day SMA could suggest the start of a deeper correction.

Contrary to this assumption, if the price rebounds off the 20-day EMA, the bulls will again try to propel the DOT/USDT pair above the resistance line. If they manage to do that, the pair could pick up momentum and rally to $41.40 and then retest the all-time high at $49.78.

Although Dogecoin (DOGE) has been trading below the moving averages for the past few days, the bears have not been able to sink the price to the immediate support at $0.21. This suggests a lack of sellers at lower levels. 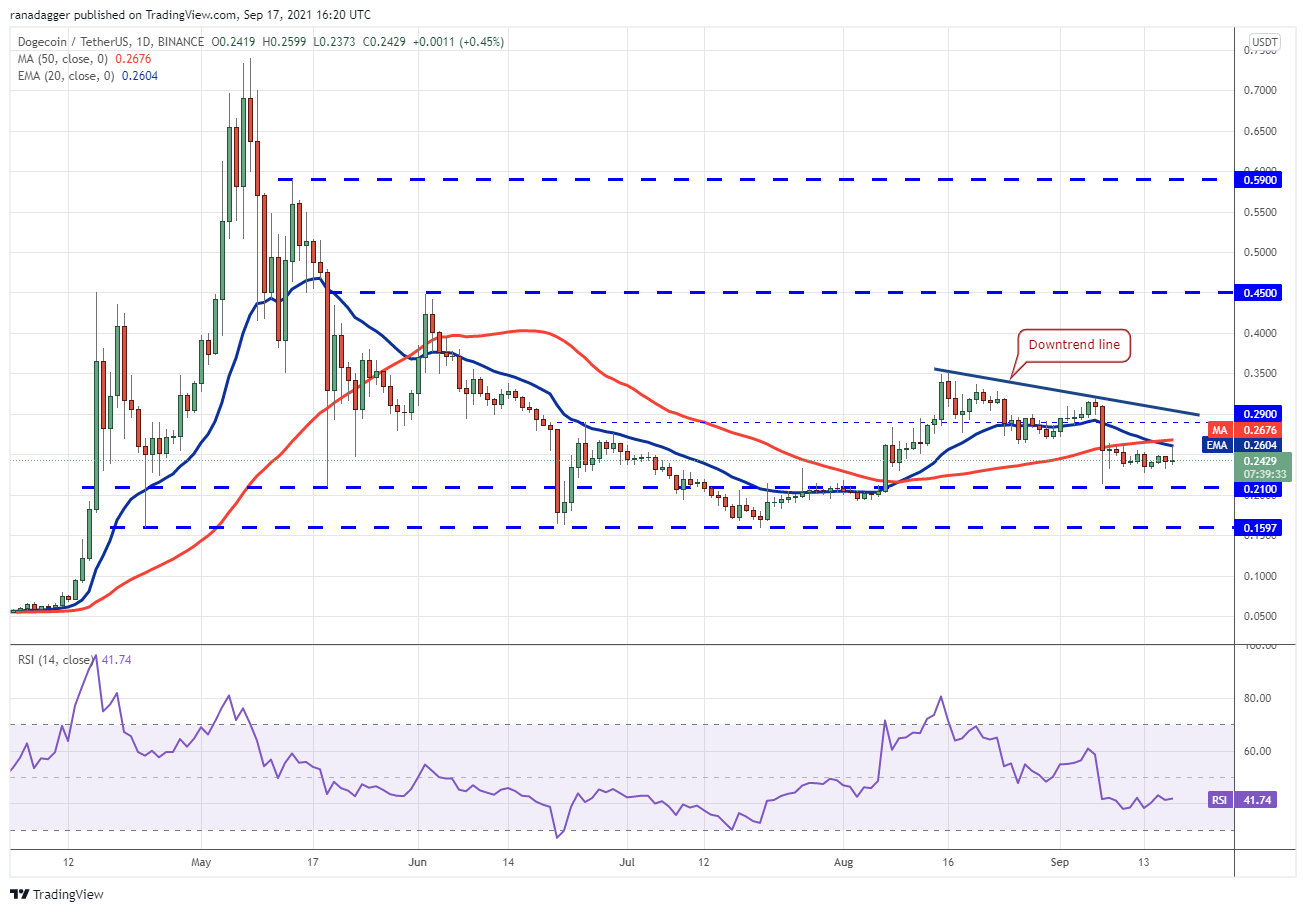 The bulls attempted to push the price above the moving averages today but the bears are in no mood to relent. The downsloping 20-day EMA ($0.26) and the RSI below 42 indicate that sellers have the upper hand.

If bears sink the price below $0.21, the DOGE/USDT pair could extend the decline to $0.15. Alternatively, if bulls drive the price above the moving averages, the pair could rise to the downtrend line.

A break and close above this resistance will be the first sign that the correction may be over. The pair could then start its journey toward the overhead resistance at $0.45.

Uniswap (UNI) surged above the moving averages on Sept. 15 but the bulls could not push the price above the downtrend line. That may have attracted profit-booking by the short-term bulls and shorting by the aggressive bears. 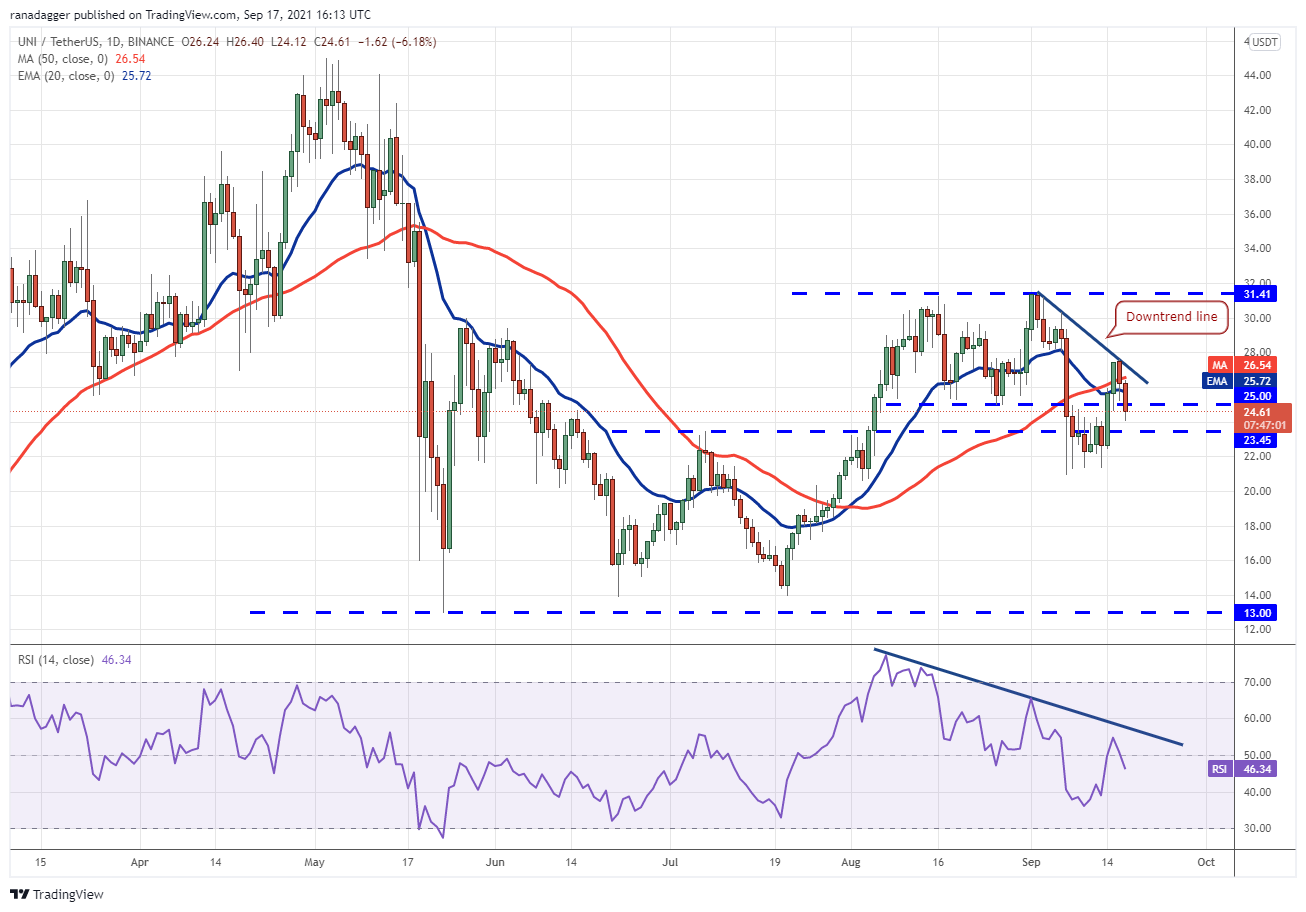 The flat 20-day EMA ($25.72) and the RSI just below 50 indicate a marginal advantage to the bears. If the price sustains below $25, the bears will try to pull the UNI/USDT pair to $23.50 and then to $21. If this support cracks, it will indicate the start of a deeper correction.

On the contrary, if the price rebounds off the current level or $23.50, the bulls will again try to drive the price above the downtrend line. If they succeed, the pair could move up to the overhead resistance at $31.41.

Terra protocol’s LUNA token rose to $39.77 on Sept. 16 but could not sustain the higher levels as seen from the long wick on the day’s candlestick. This suggests that traders may be closing their long positions on rallies. 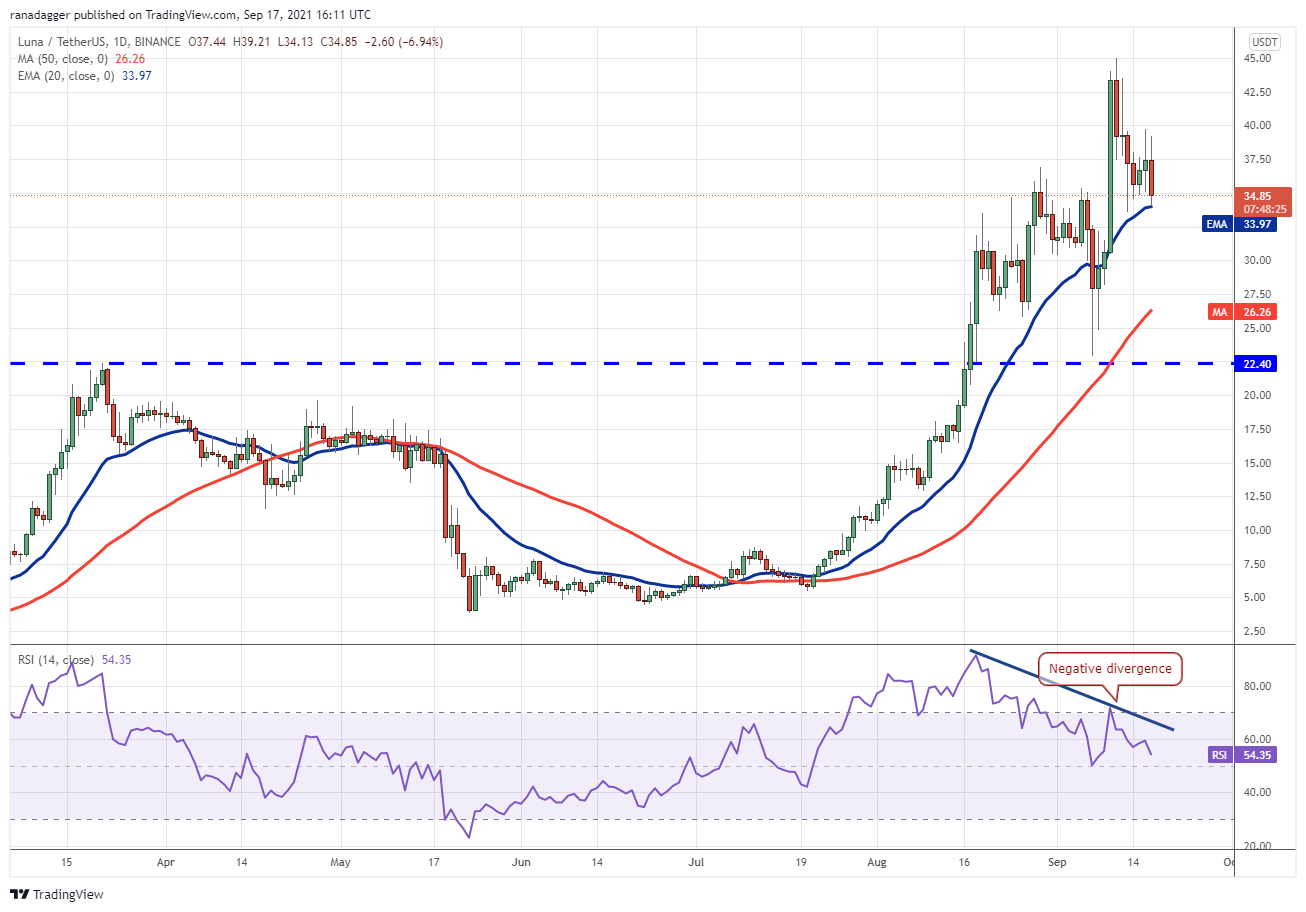 The bears will now try to seize the opportunity and sink the price below the 20-day exponential moving average ($33.97). If they manage to do that, the LUNA/USDT pair could decline to the 50-day SMA ($26.26).

Alternatively, if the price again rebounds off the 20-day EMA, the pair could rise to $40 and remain range-bound between these two levels for a few more days. A breakout and close above $40 could open the doors for a retest of the all-time high at $45.01. 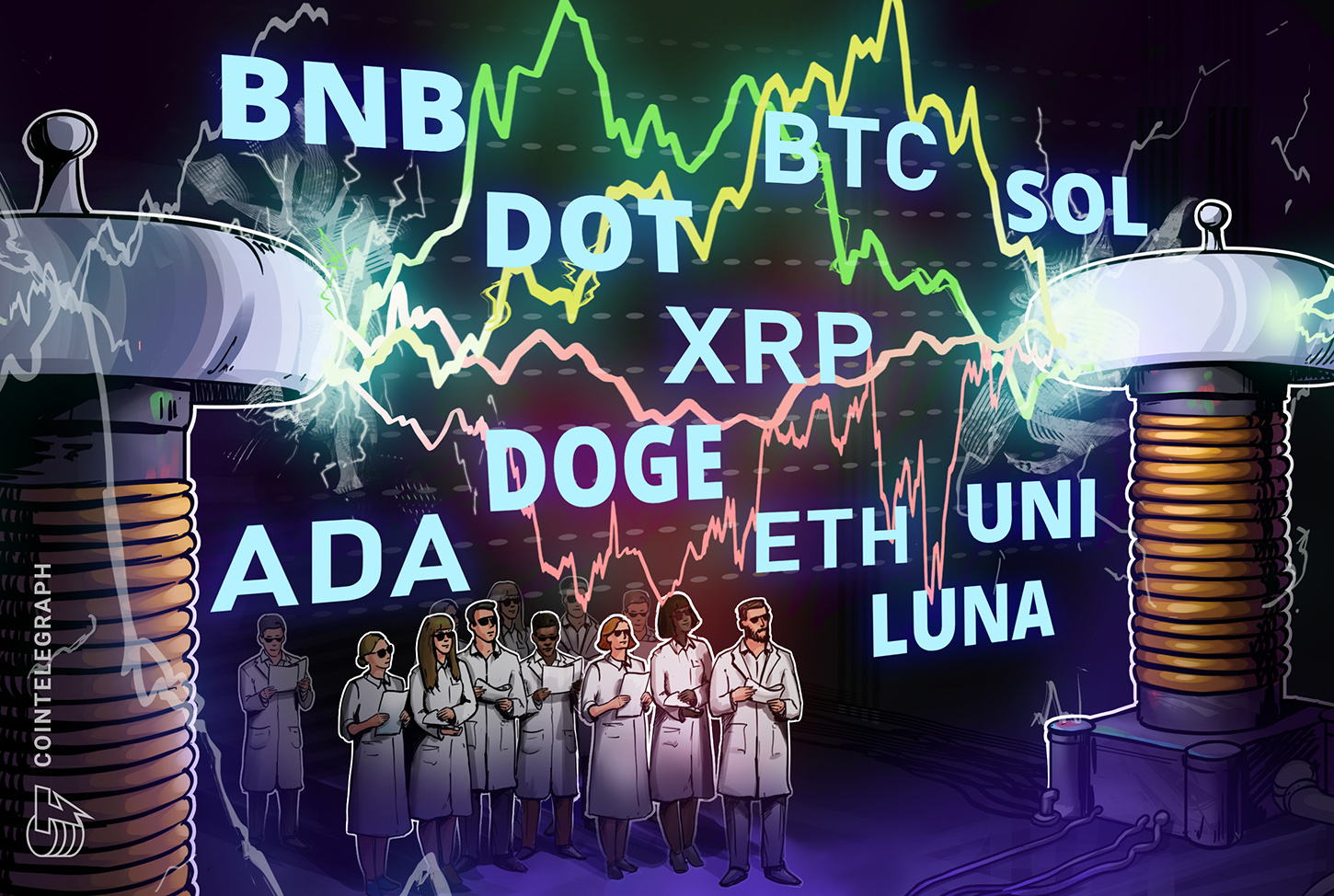 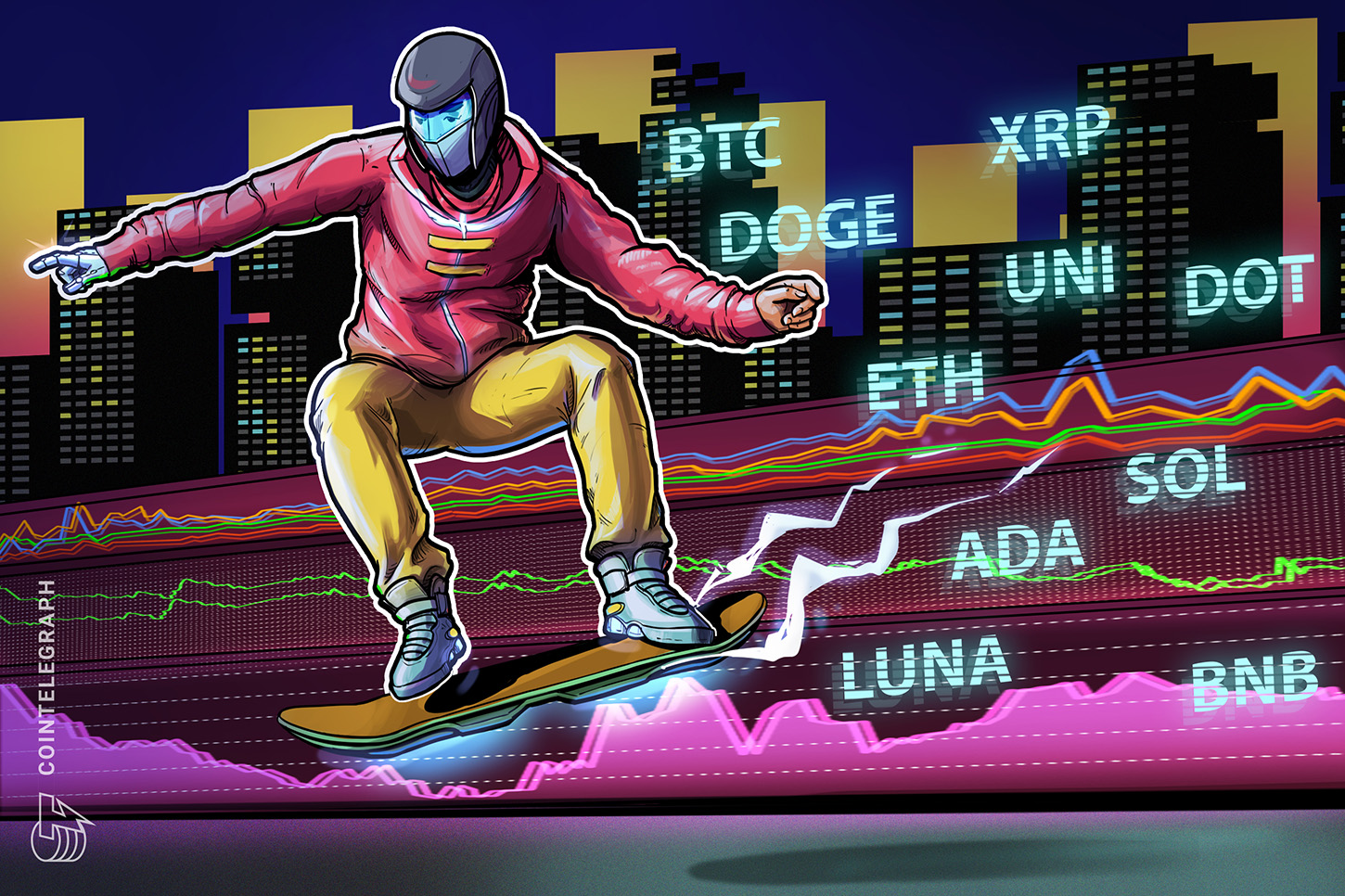 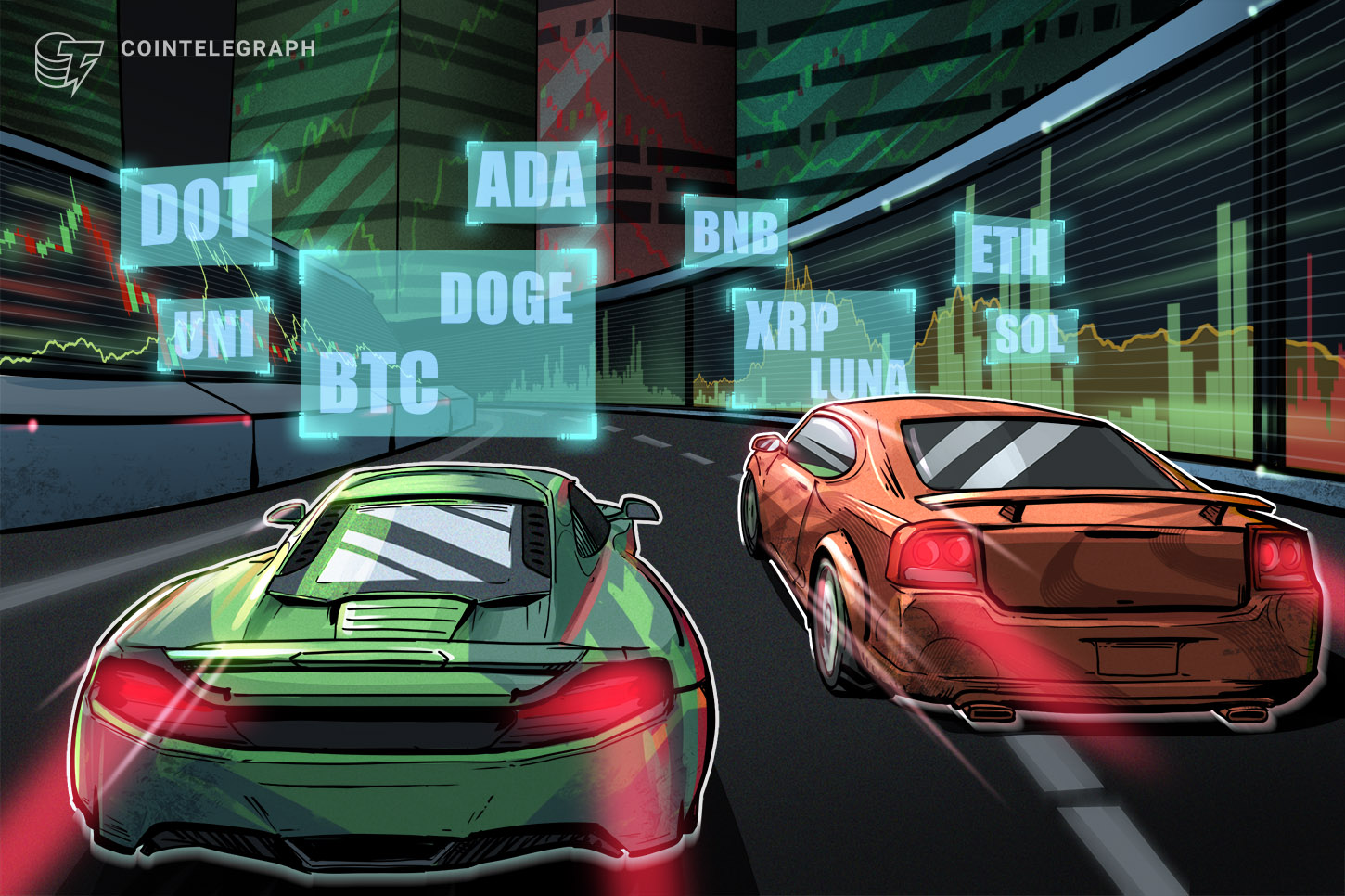