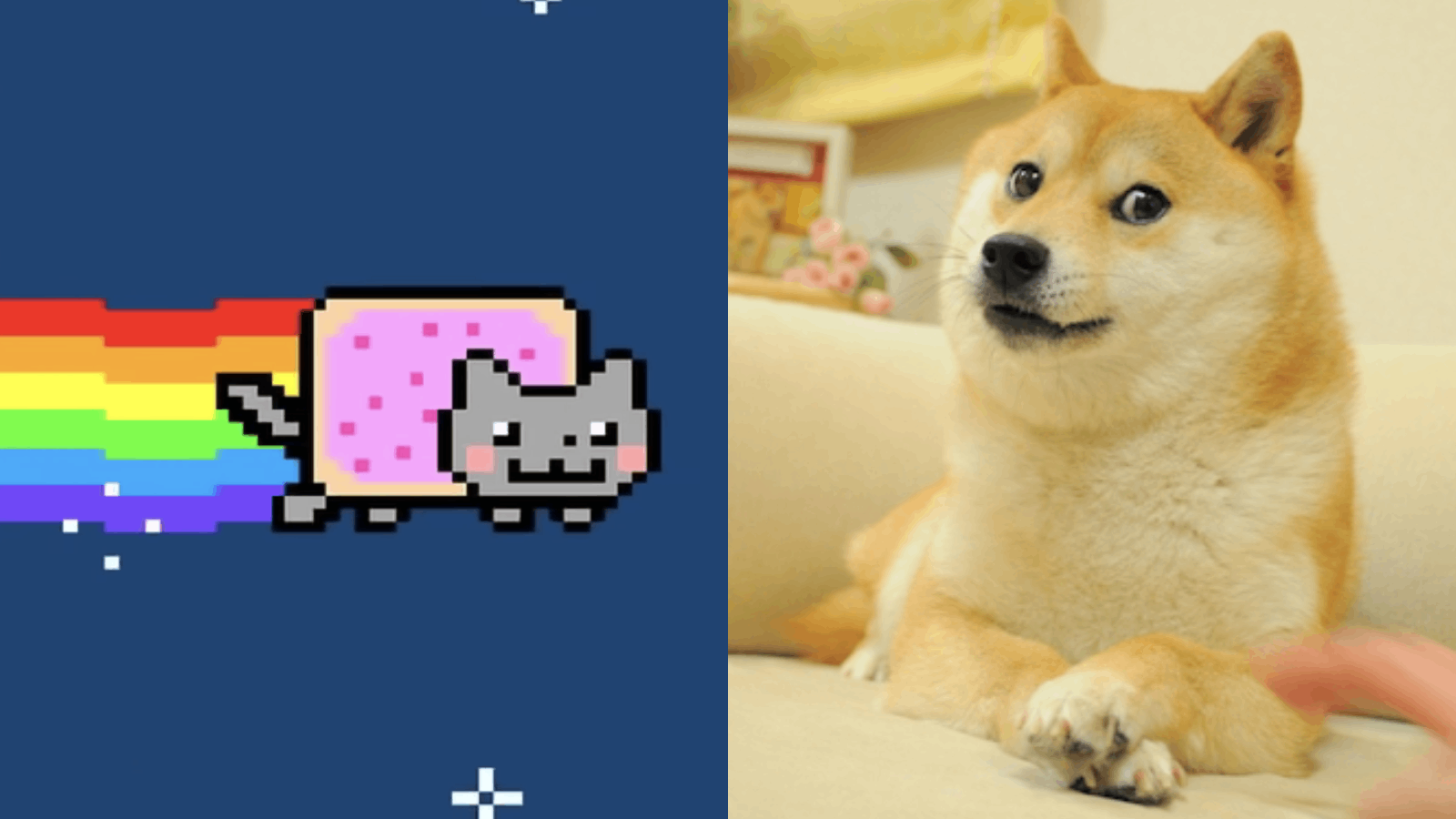 Quite a lot happened over the weekend, spanning Ethereum, Cardano and Avalanche — with a dose of Layer 2 activity thrown in.

Ethereum’s second-layer scaling solution Arbitrum is getting its first stress test in the real world. Since going live on August 31, at least 76 projects have now integrated it, providing a variety of things to do on the network.

The network is a scaling solution based on optimistic rollups. In short, a lot of transactions can be executed on the network, which are then batched together and settled on the main Ethereum blockchain. Batching them is a technique that uses up less space in total, making each transaction much cheaper.

With many crypto users bridging their funds over — taking them from the Ethereum main chain to Arbitrum’s layer — the scaling solution is now looking after a growing number of funds. A number that has shot up rapidly, rising from $238 million to $2.2 billion over the weekend.

And what have people largely been using this for? Well to farm cats, obviously.

Nyancat explodes in popularity — while its price crashes

With all this capital flooding into the platform, it had to go somewhere. And what’s more appealing than a supposed 7,000% yield?

ArbiNYAN is a token that was launched specifically on Arbitrum, branded around the Internet meme Nyan Cat. Its website provided three DeFi pools for farming, a process where you deposit funds and receive a yield in response. You could farm ETH for a low percentage, you could farm Nyan itself for a high four-digit percentage or provide liquidity for the two assets at an even higher percentage.

And it’s taken off like mad. According to DeFi Llama, around $1.45 billion is held in ArbiNYAN’s platform. That makes for 66% of all the value on Arbitrum itself — and over the weekend that percentage went as high as 97.4%.

But like most crazy yields, it was too good to be true. While the number of tokens might be increasing at a rapid rate, this flood of new tokens diluted their value. It fell from $7 to $0.71. Ouch.

Talking of pets and price crashes, the value of PleasrDAO’s fractionalized dog meme NFT has plummeted.

PleasrDAO is a collective of individuals who purchased an NFT of a picture of a Shiba Inu dog — which sparked memes and memecurrencies — for $4 million in June. The collective then decided to fractionalize the NFT into millions of tiny pieces, and to sell them individually. The idea was to allow many more people to take part in owning the NFT, and potentially profit from its value.

It worked, at least initially. Within a few days, the value of the tokens spiked to $0.043 — giving the NFT an implied valuation of $730 million (although this is a largely meaningless metric). But that fervor has settled now, and the price has dropped to $0.0074. 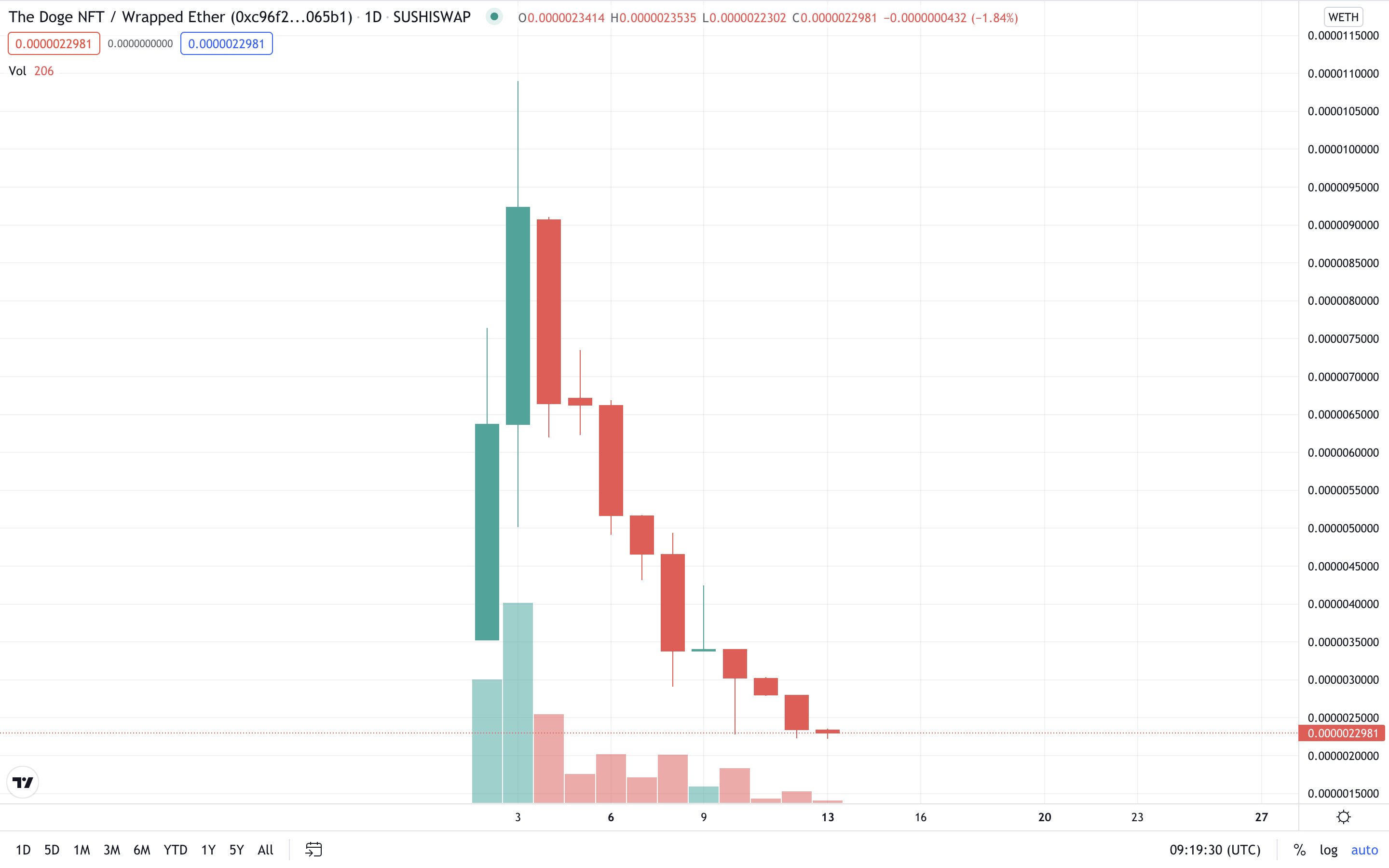 The price of DOG collapsed even further over the weekend, against USD and ETH. Source: DOG/WETH on TradingView.

Although, despite the drop, the artwork still has an implied valuation of $125 million.

Yes, it finally happened. The long-awaited run toward smart contracts on Cardano has finally ended and you can now create decentralized applications on the platform.

Afterwards, Cardano founder tweeted, “We did it. Everyone is a winner. Even Uncle V :)” — presumably referring to Ethereum co-founder Vitalik Buterin.

Questions remain, however, over how Cardano will be able to support decentralized applications, particularly DeFi ones, with its version of a UTXO model (the kind of system that bitcoin has). Answers include batching transactions, which would enable multiple transactions at once.

Avalanche had its first hack

The budding blockchain platform Avalanche has witnessed its first major DeFi hack. According to DeFi Prime, DeFi platform Zabu Finance was exploited for around $3.2 million.

During the exploit, the attacker got hold of a large supply of the ZABU tokens and dumped them for other coins. As a result, the price of the project’s native ZABU token was wiped out. It fell from $0.0037 to $0.00003 in minutes. 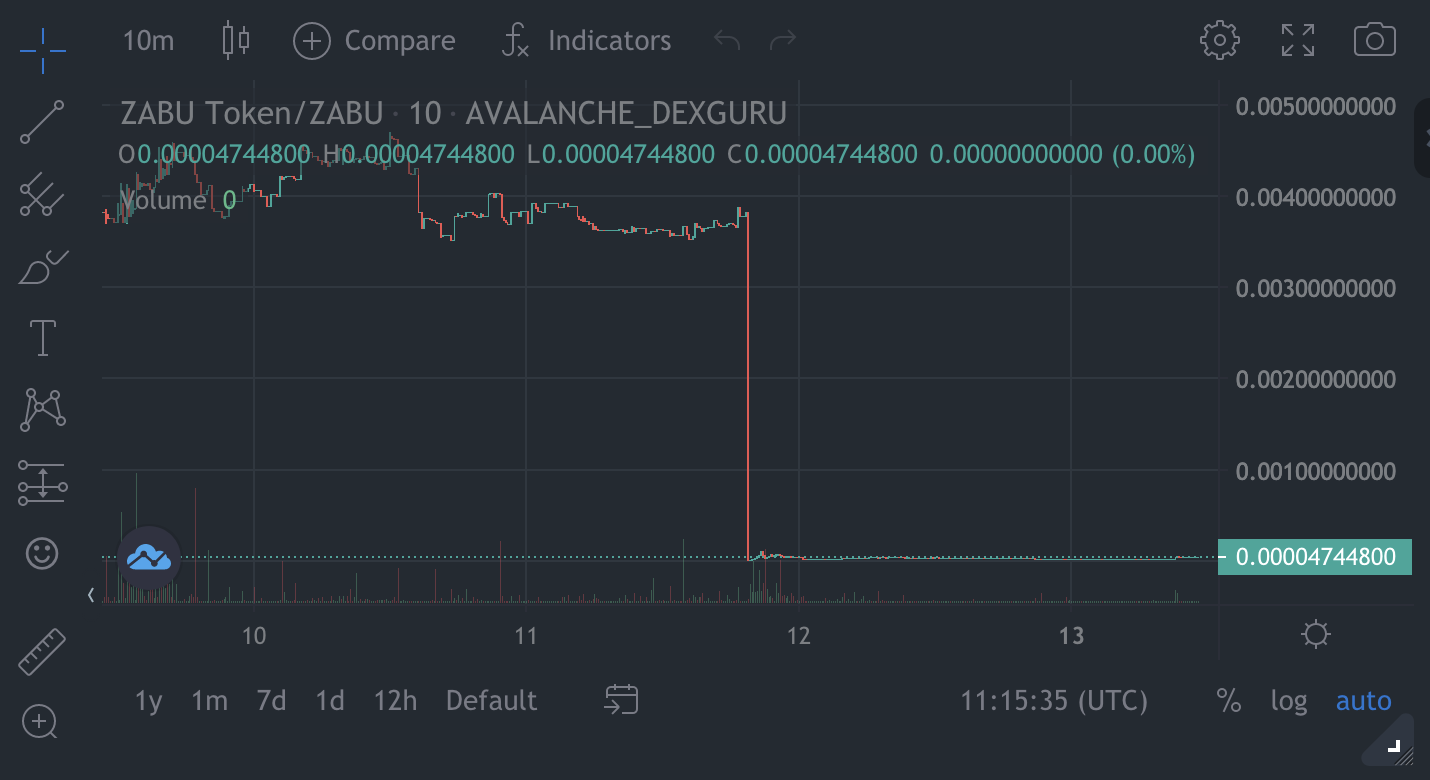 Zabu Finance acknowledged the hack, claiming only $600,000 was stolen, and has identified the issue. It is planning to take a snapshot of funds before the hack — and after, for those who later bought in — to distribute out tokens and to try to repair the damage.

Some say the lobsters have been controlling Congress for centuries. Okay, jokes aside, but seriously, a different collective this time — known as Universe DAO — has sold 10,000 NFTs of cartoon lobsters and donated the proceeds to the crypto lobbying group Coin Center.

“Help the Lobby Lobsters get in front of Congress,” says the bio on OpenSea, “Lobby Lobster's goal is to raise funds, they can help educate the representatives in Washington who make the laws around cryptocurrency. They will wear the suits for us!”

The lobsters sold for 1,000 ETH, which is worth $3.2 million at current prices (although was higher at the time). According to a governance vote, the plan was to give the proceeds to the lobbying firm and vote on what to do with the proceeds from ongoing sales. This vote passed with 100% approval, meaning the donation will soon be on its way to Coin Center.

As The Block reported, the Solana blockchain saw its first sale of an NFT for more than a million dollars. The sale was for Degen Ape #7225, a scarred zombie version of an ape with a halo, a gold tooth and a brain in its mouth. It’s part of the Degenerate Ape Academy, which has the highest market cap of any Solana NFT project, per Solanalysis. 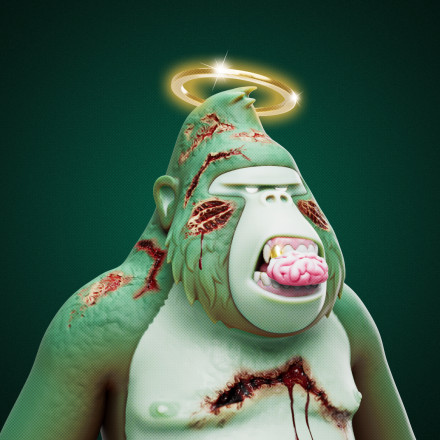 Plus in more donations news, Trippy Bunny Tribe, which sold its NFTs for 1.11 SOL on Saturday, gave its $220,000 in proceeds to the American Foundation for Suicide Prevention.