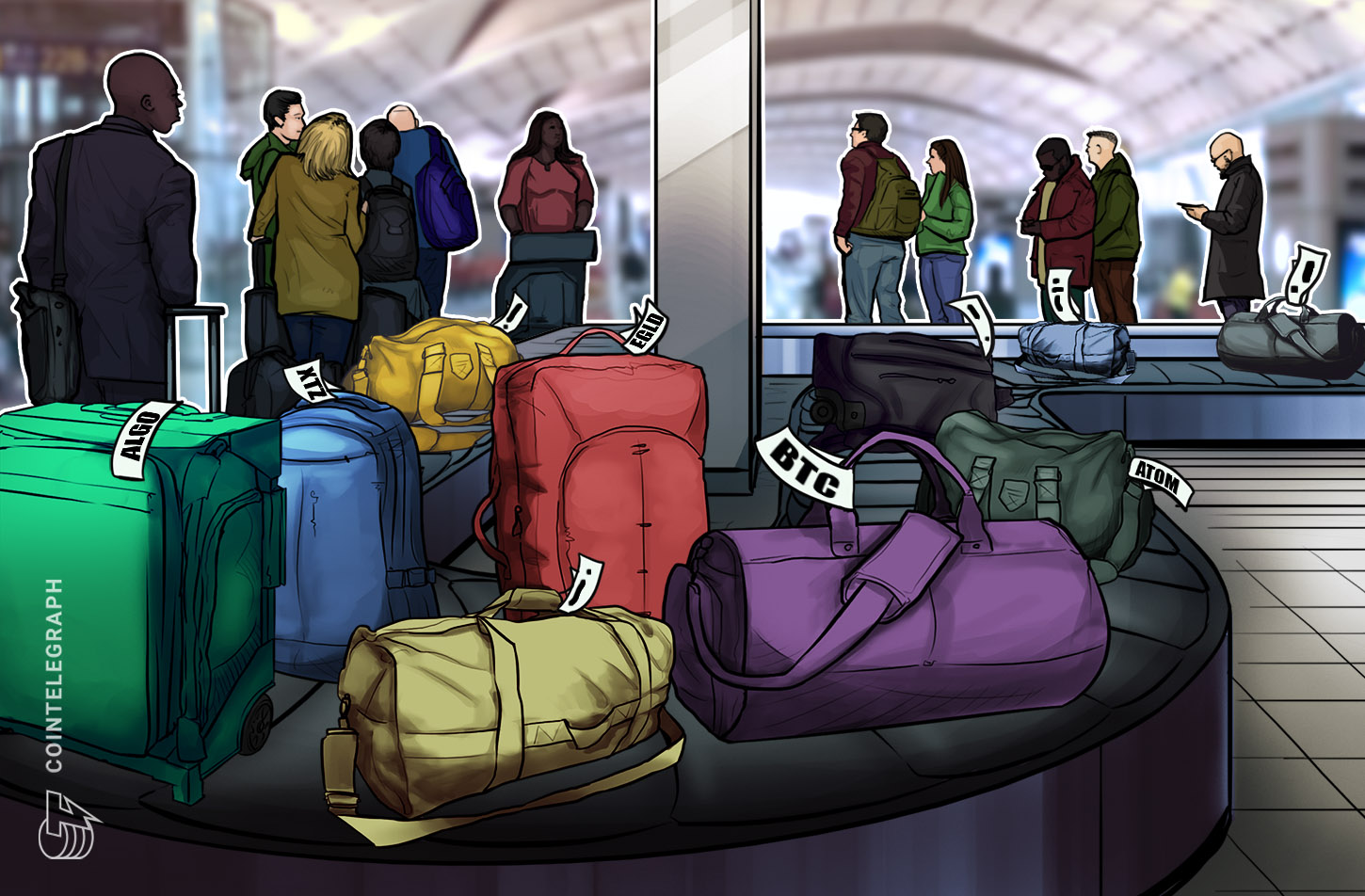 Bitcoin (BTC) is witnessing a tough tussle between the bulls and the bears near the 200-day simple moving average, which is considered as an important level by institutional investors attempting to decide whether the asset is bullish or bearish.

Along with this, crypto investors are also watching the formation of a golden cross in Bitcoin. If this bullish setup completes, it will signal a trend in favor of the bulls. For the time being, investors continue to focus on select altcoins that have continued their northward journey. 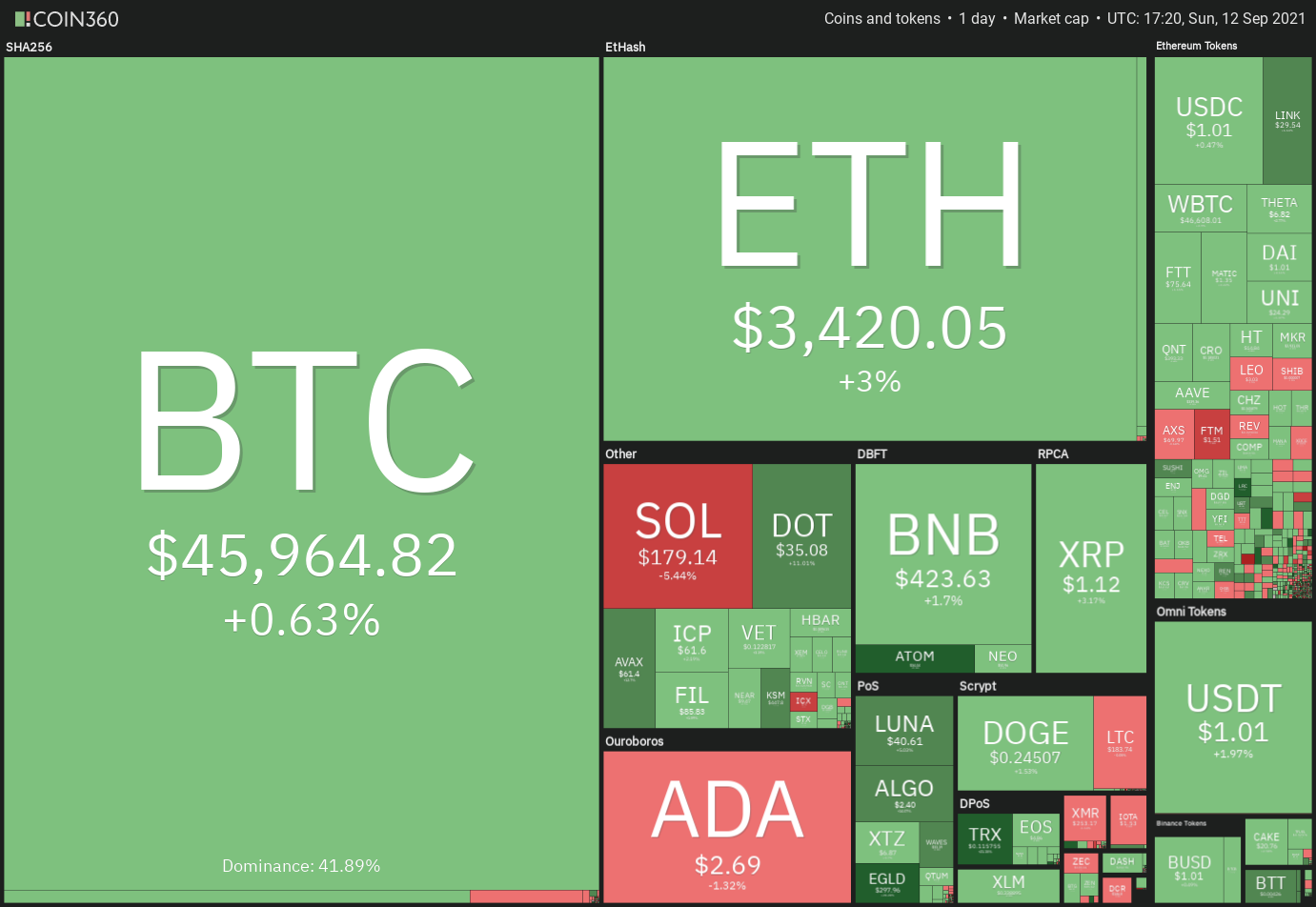 Reaching this milestone led some Twitter users to quote Hal Finney, one of Bitcoin’s earliest pioneers who had said:

"Every day that goes by and Bitcoin hasn't collapsed due to legal or technical problems, that brings new information to the market. It increases the chance of Bitcoin's eventual success and justifies a higher price."

Let’s study the charts of the top-5 cryptocurrencies that may attract trader’s attention in the short term.

Bitcoin closed below the 200-day SMA ($45,894) on Sep. 10 but bears have not been able to capitalize on this move. The bulls are currently attempting to push the price back above the 200-day SMA. 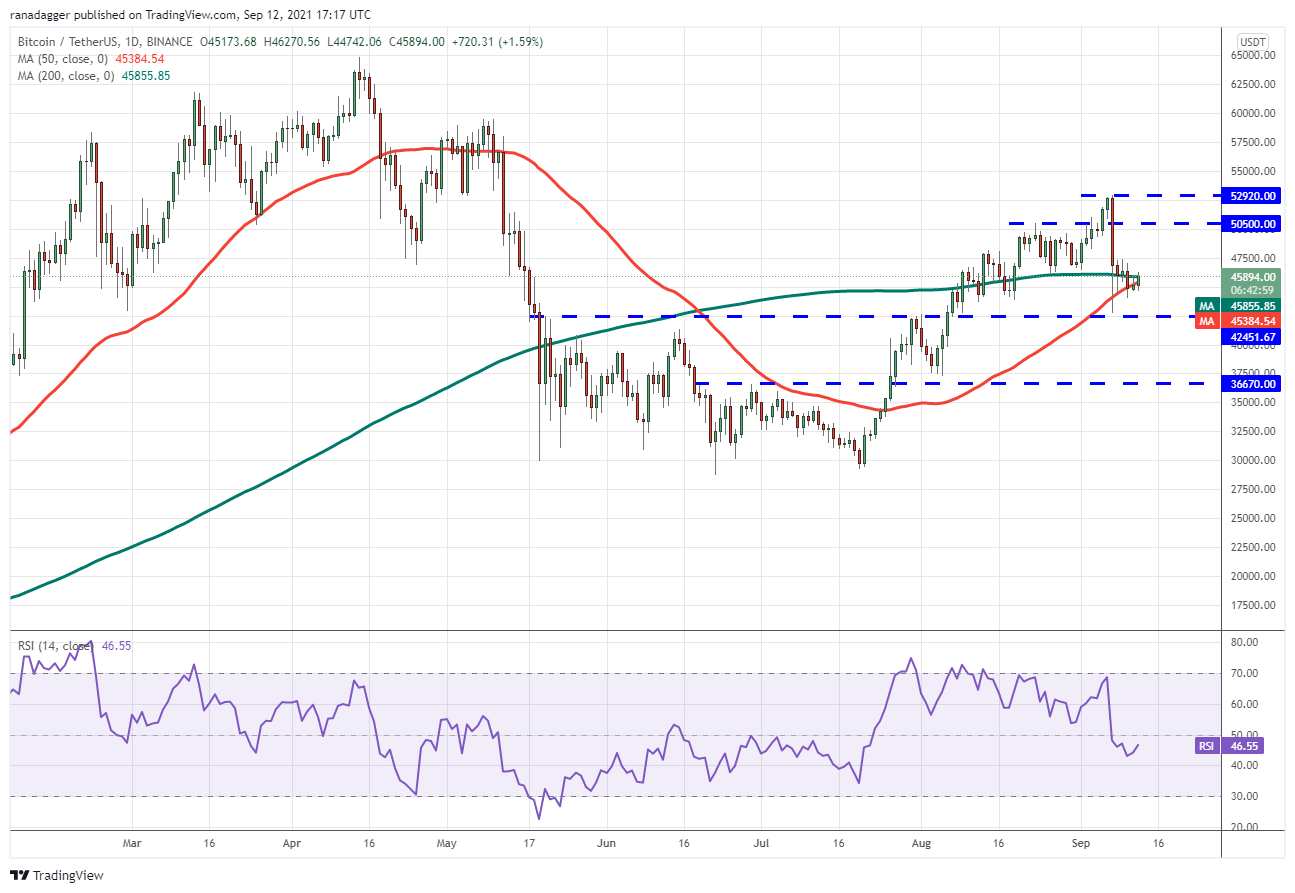 The moving averages are close to completing a golden cross, indicating that the advantage is likely to tilt in favor of the bulls. If buyers push the price above $47,399.97, the BTC/USDT pair will attempt to rise to the overhead zone of $50,500 to $52,920.

The bears are likely to defend the overhead zone aggressively but if bulls do not give up much ground, the likelihood of a break above $52,920 increases. If that happens, the pair could rally to $60,000.

On the other hand, if the price turns down from the current level, it will suggest that bears are aggressively defending the 200-day SMA. The pair could then retest the critical support at $42,451.67. A break below this level could tilt the advantage in favor of bears. 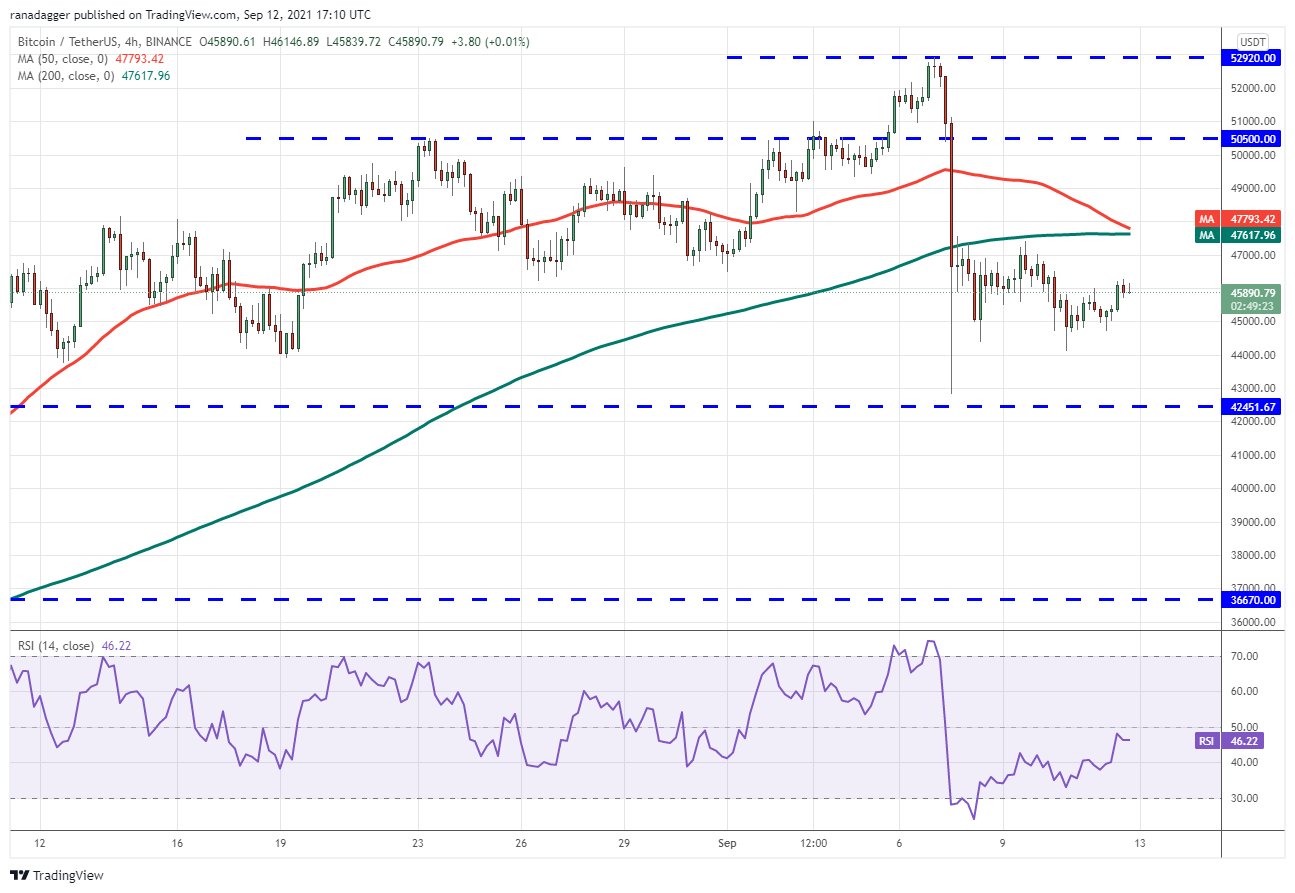 The 4-hour chart shows that the price turned down from $47,550 on two occasions. Hence, this becomes an important level to watch out for in the short term. A break and close above this resistance may open the doors for a possible move to $50,500.

However, the moving averages are on the verge of a bearish crossover, indicating that sellers are attempting to make a comeback. A break and close below $44,000 could signal a minor advantage to bears. The pair could then drop to the critical level at $42,451.67.

The long tail on Sep. 7 shows that bulls aggressively bought the dip to the 50-day SMA ($1.10). Strong buying on Sep. 8 propelled Algorand (ALGO) above the stiff overhead resistance at $1.84. 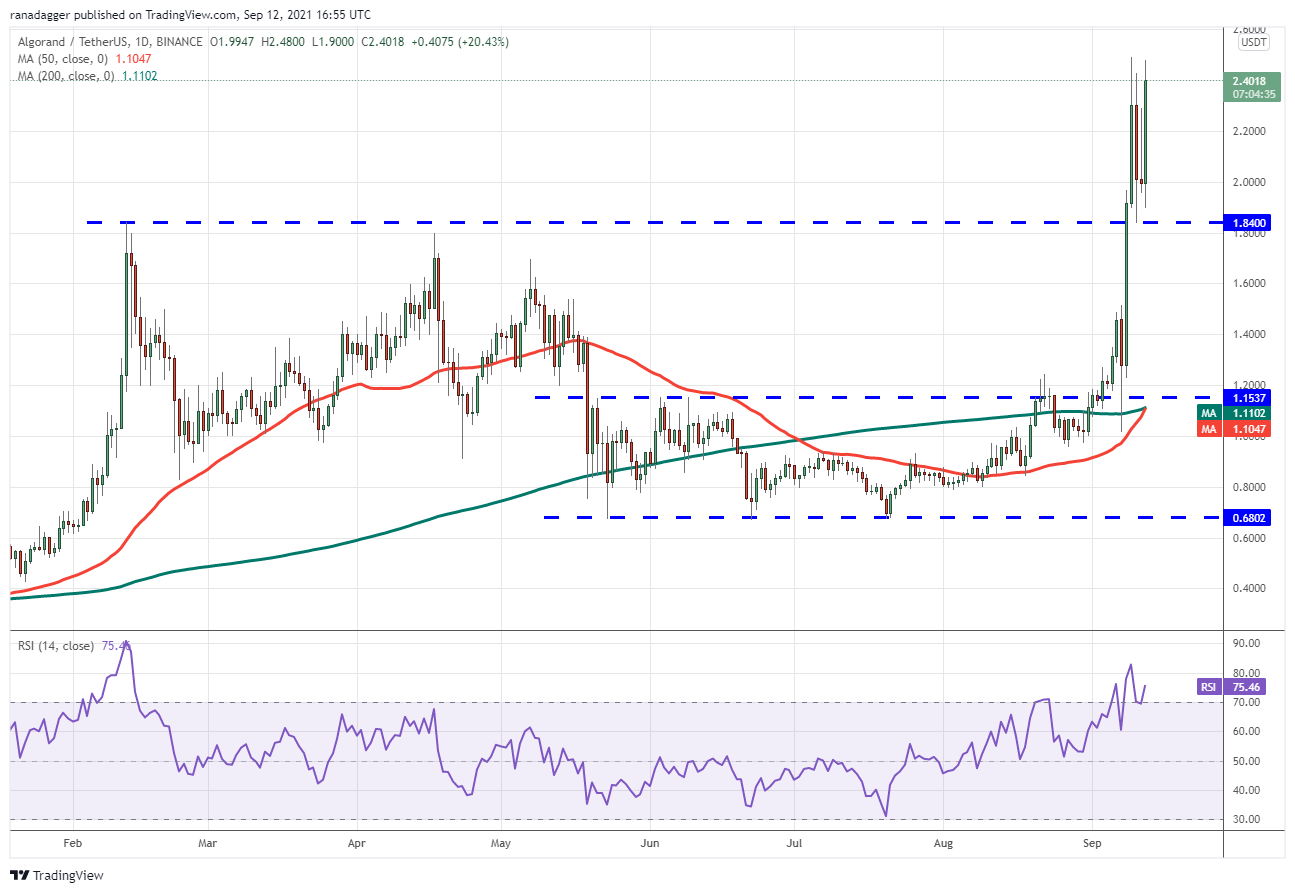 The bears tried to trap the bulls by sinking the price below the breakout level at $1.84 on Sep. 10 but the buyers had other plans. The ALGO/USDT pair has rebounded off the support with strength today and bulls are currently attempting to thrust the price above $2.49.

If they succeed, the pair could resume the uptrend with the first target on the upside at $3 and then $3.32. On the contrary, if the price once again turns down from $2.49, the pair could drop to $1.84 and stay range-bound between these two levels for the next few days.

A break and close below $1.84 will suggest that the current breakout was a bull trap. The pair could then slide to $1.60. 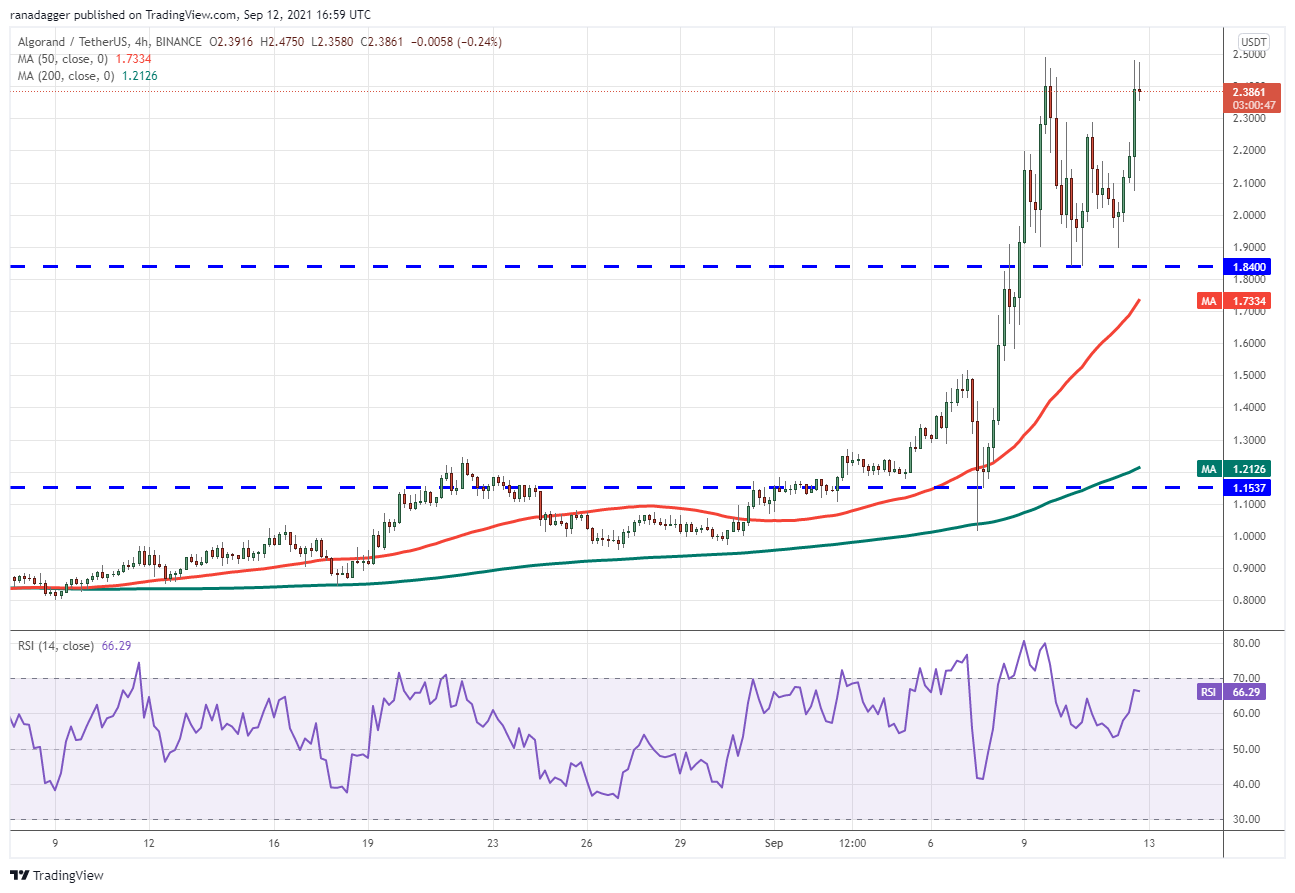 The 4-hour chart shows that bears are defending the overhead resistance at $2.49. If sellers pull the price below $2.30, the pair could again slide to the breakout level at $1.84. A bounce off this support could suggest a range-bound action for some time.

If bulls do not give up much ground from the current levels, it will increase the possibility of a break above $2.49. If buyers sustain the breakout, it could signal the resumption of the uptrend.

Cosmos (ATOM) bounced off the breakout level at $17.56 on Sep. 7, suggesting that bulls are aggressively defending this support. This was the second instance that bulls successfully held this level, the previous one was on Aug. 26 and 27. 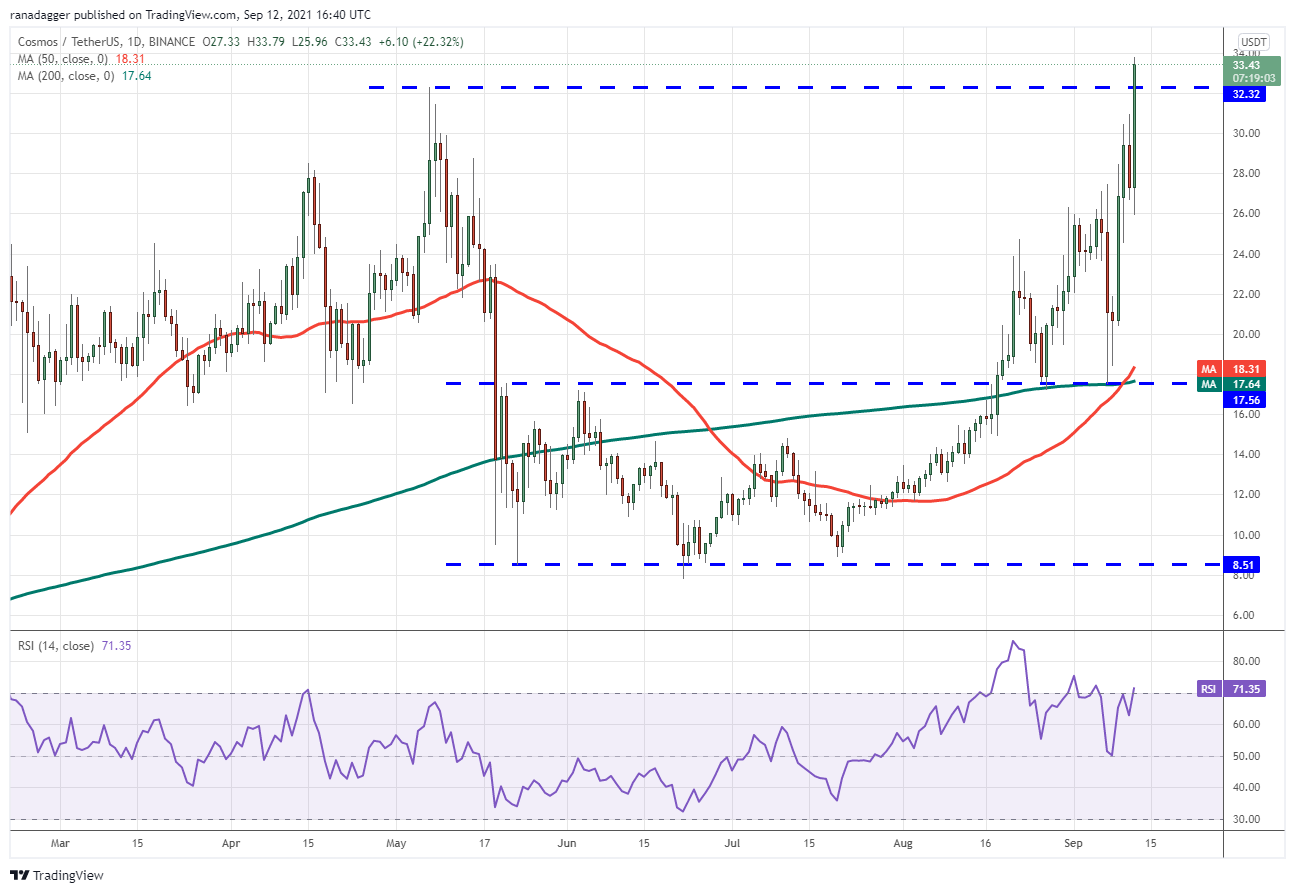 The long tail on Sep. 8 showed that sentiment was turning positive and traders were buying on dips. The moving averages have completed a golden cross, indicating that bulls are back in the driver’s seat.

Strong buying today has pushed the price above the overhead resistance at $32.32. If bulls sustain the breakout, the ATOM/USDT pair may rally to $39.43.

The bears are likely to have other plans. They will try to pull the price back below $32.32 and trap the aggressive bulls. If they succeed, the pair may drop to $26. A break below this level will suggest that the bullish momentum has weakened. 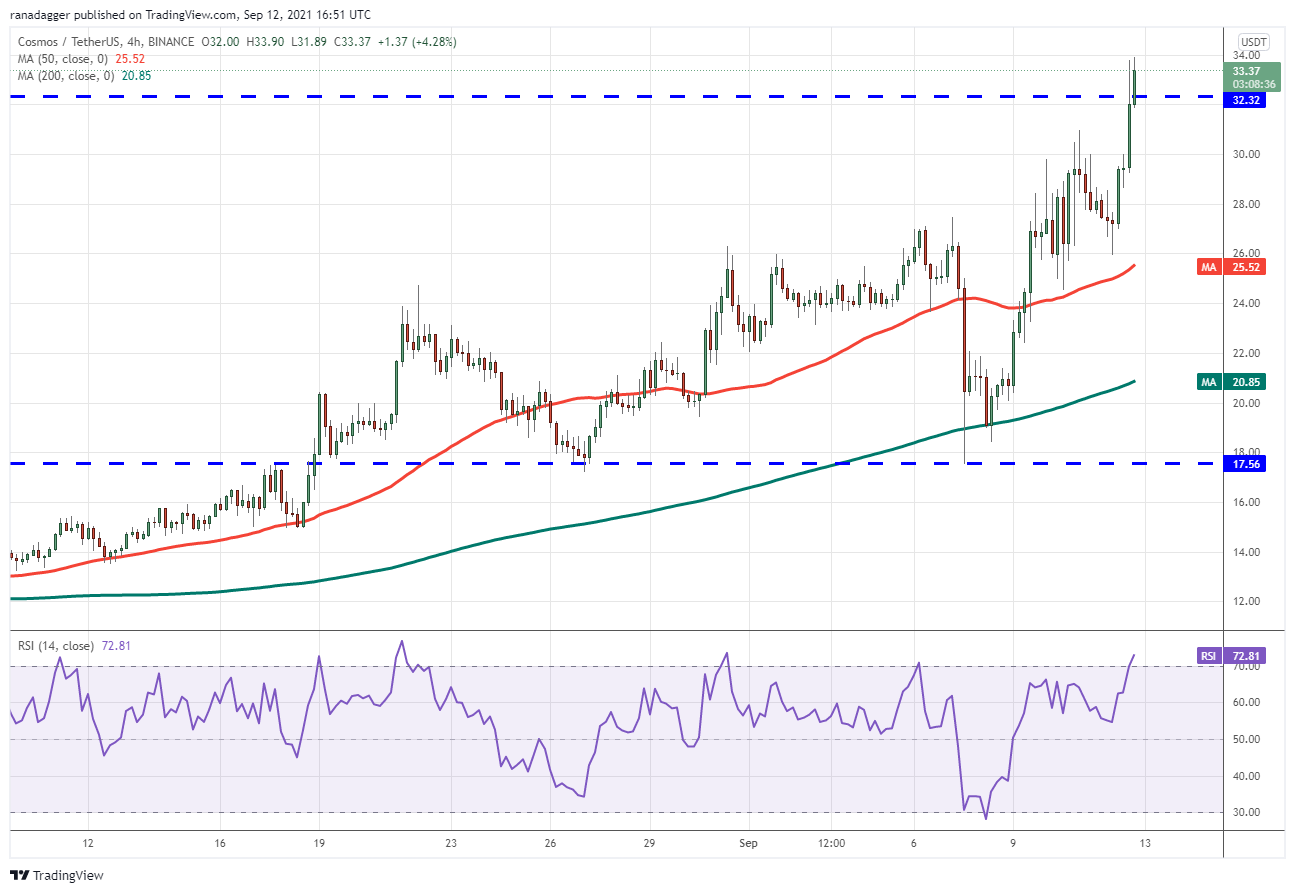 The 4-hour chart shows that bears sold the breakout above $32.32 but they could not sustain the pair below $32. This suggests that bulls continue to buy on every minor dip. If bulls sustain the price above $32.32, the pair could rally to $38.49.

Conversely, if bears again pull the price below $32.32, the pair could drop to $30.98. If the price rebounds off this level, the bulls will attempt to resume the uptrend but if the support cracks, the decline could extend to the critical support at $26.

Tezos (XTZ) completed a successful retest of the breakout level at $4.47 on Sept. 7 and Sept. 8. Although bears pulled the price below the 200-day SMA ($4.19), they could not sustain the lower levels. This suggests accumulation on dips. 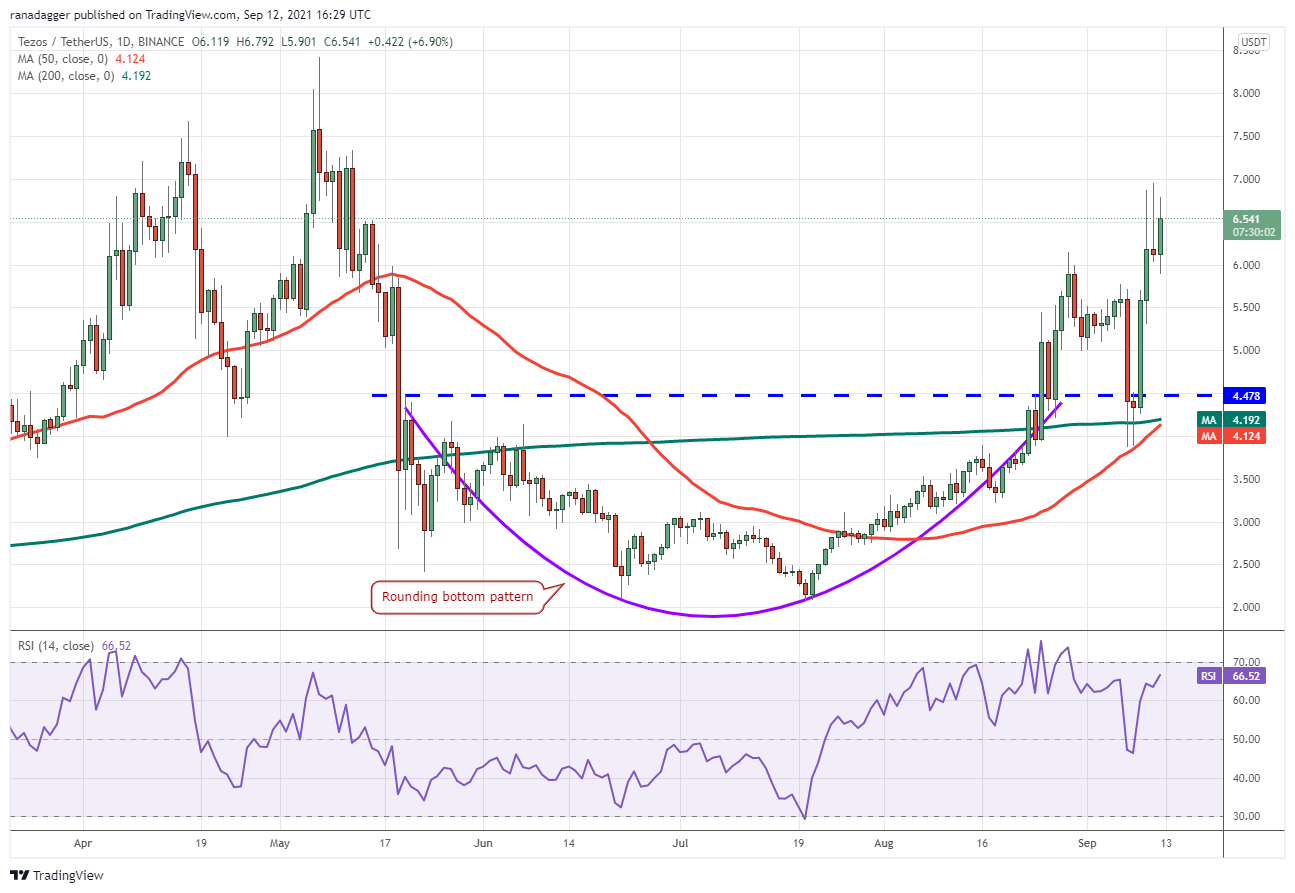 The XTZ/USDT pair picked up momentum on Sep. 9 and bulls pushed the price above the overhead resistance at $6.14 on Sep. 10. The long wick on the candlestick of the past two days indicates strong selling near $7.

Hence, this becomes an important resistance for the bulls to cross. If they manage to do that, the pair could retest the all-time high at $8.42. A breakout and close above this level will suggest the start of a new uptrend.

Alternatively, if the price once again turns down from the overhead resistance, the pair could drop to $5. Such a move will suggest aggressive profit-booking at higher levels. 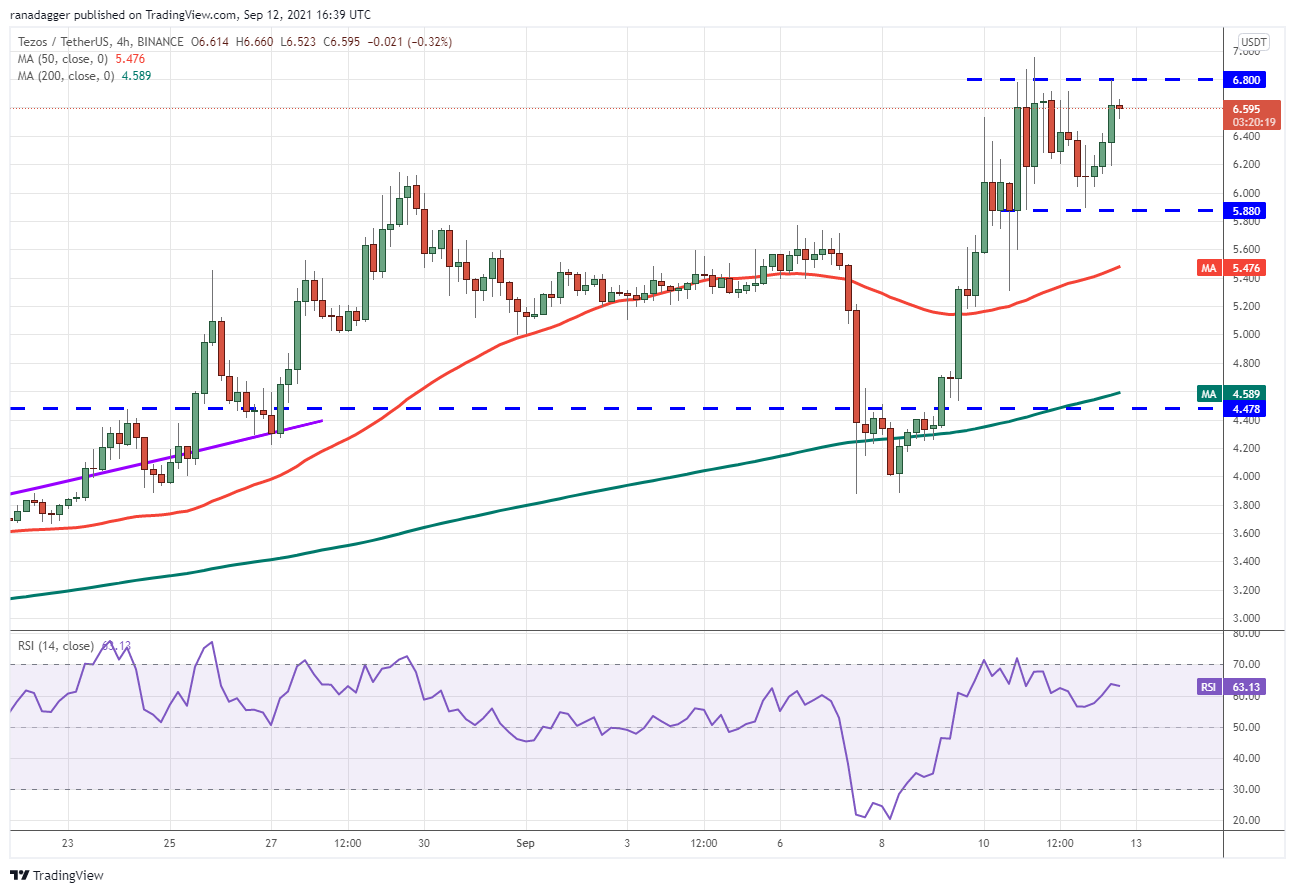 If the price turns down from $6.80, the pair may extend its range-bound action for some more time. A break and close below $5.88 will be the first sign that bulls are losing their grip. The pair could then drop to the 50-SMA.

Elrond (EGLD) rebounded off the 200-day SMA ($131) on Sep. 7 and Sep. 8, suggesting strong demand at lower levels. The moving averages completed a golden cross on Sep. 9 indicating that bulls are back in command. 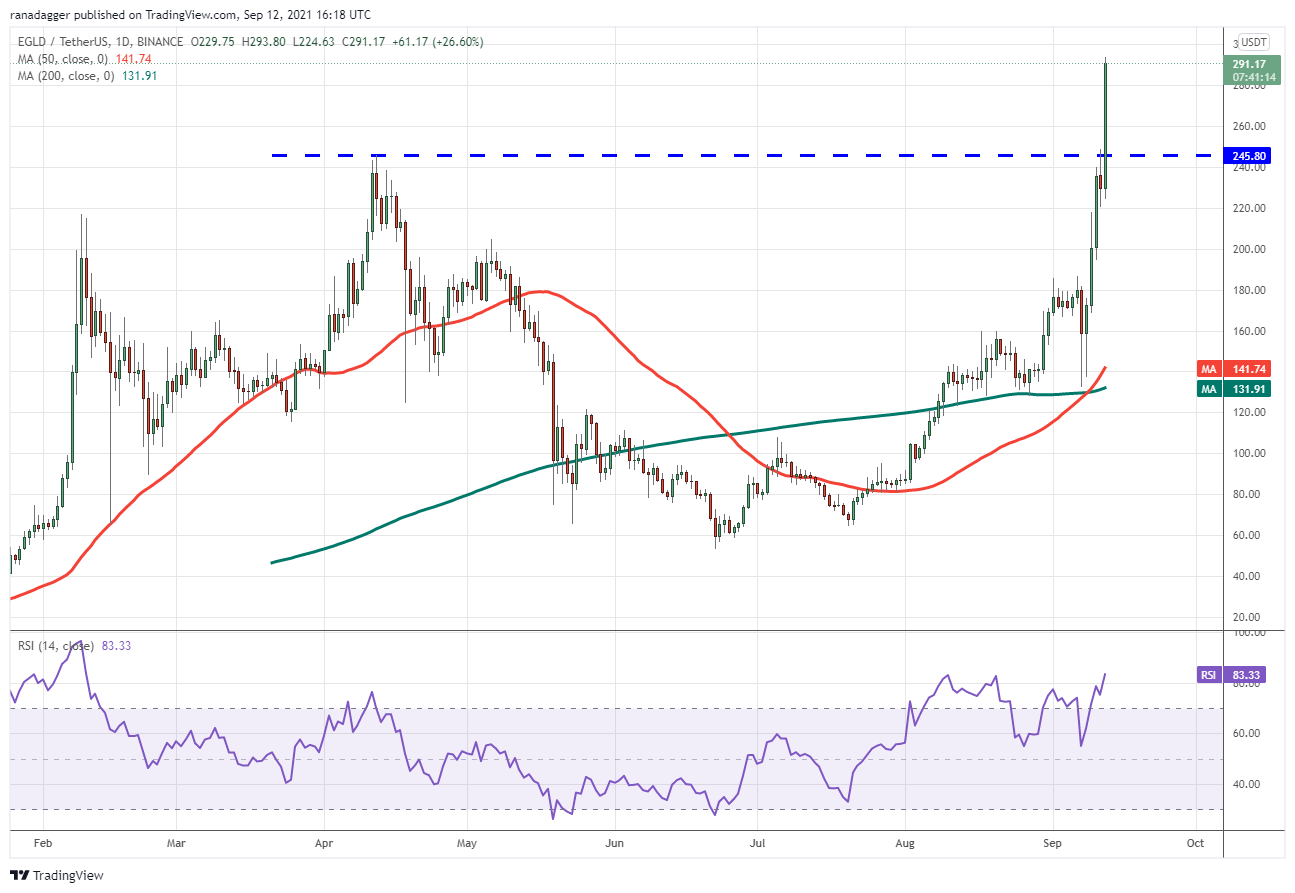 If bulls sustain the price above $245.80, the pair could start the next leg of the uptrend. The bears may pose a stiff challenge at the psychological level at $300, but if bulls can overcome this resistance, the rally may extend to $357.80.

The bears will have to pull and sustain the price below the breakout level at $245.80 to signal a possible change in trend. 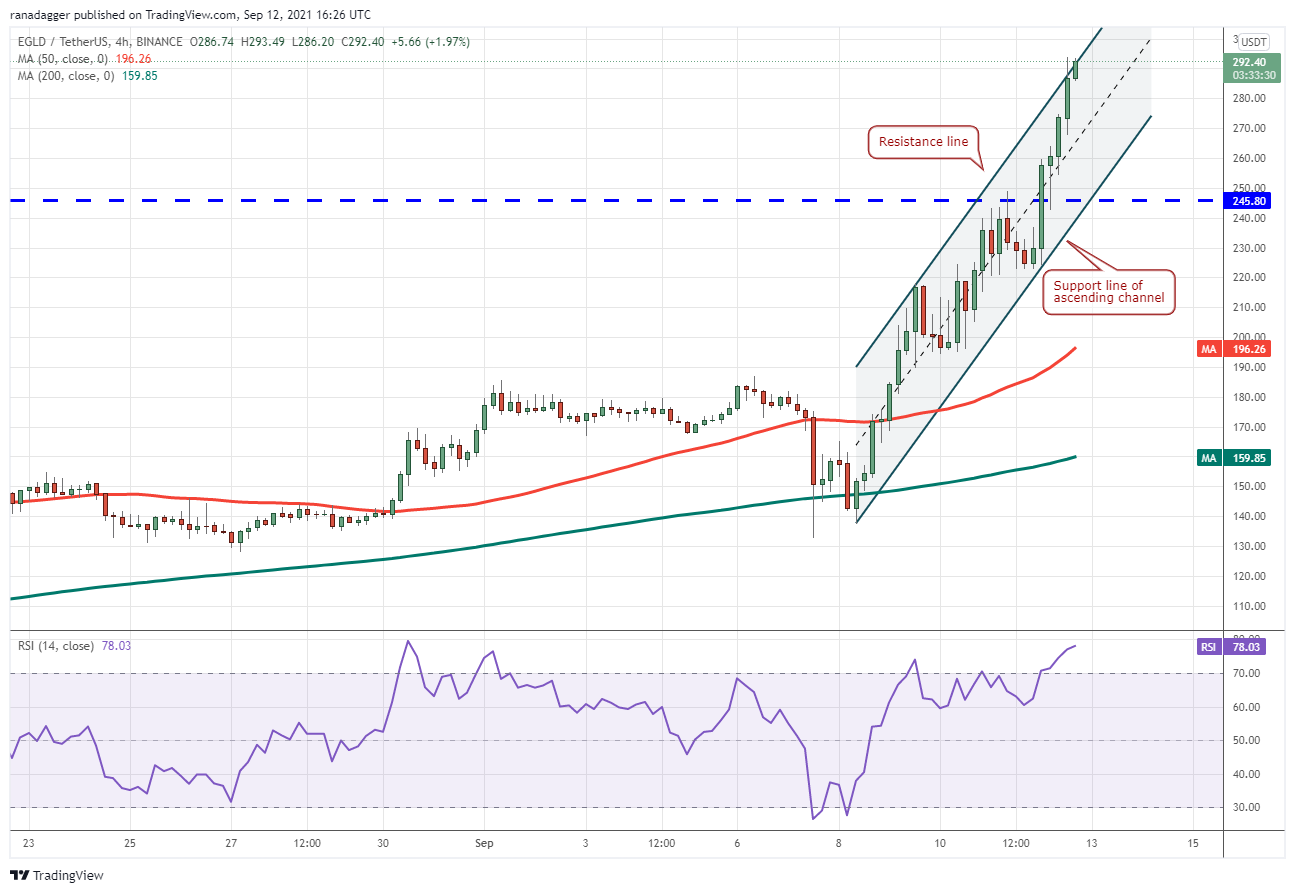 The bulls are currently attempting to push and sustain the price above the resistance line of the ascending channel pattern. If they manage to do that, the bullish momentum could pick up further and the pair may enter a blow-off phase.

On the other hand, if the price turns down from the current level, the pair may drop to the support line of the channel. A strong rebound off it will suggest that the sentiment remains positive and traders are buying on dips.

A break and close below the channel will be the first sign that the bullish momentum could be weakening. 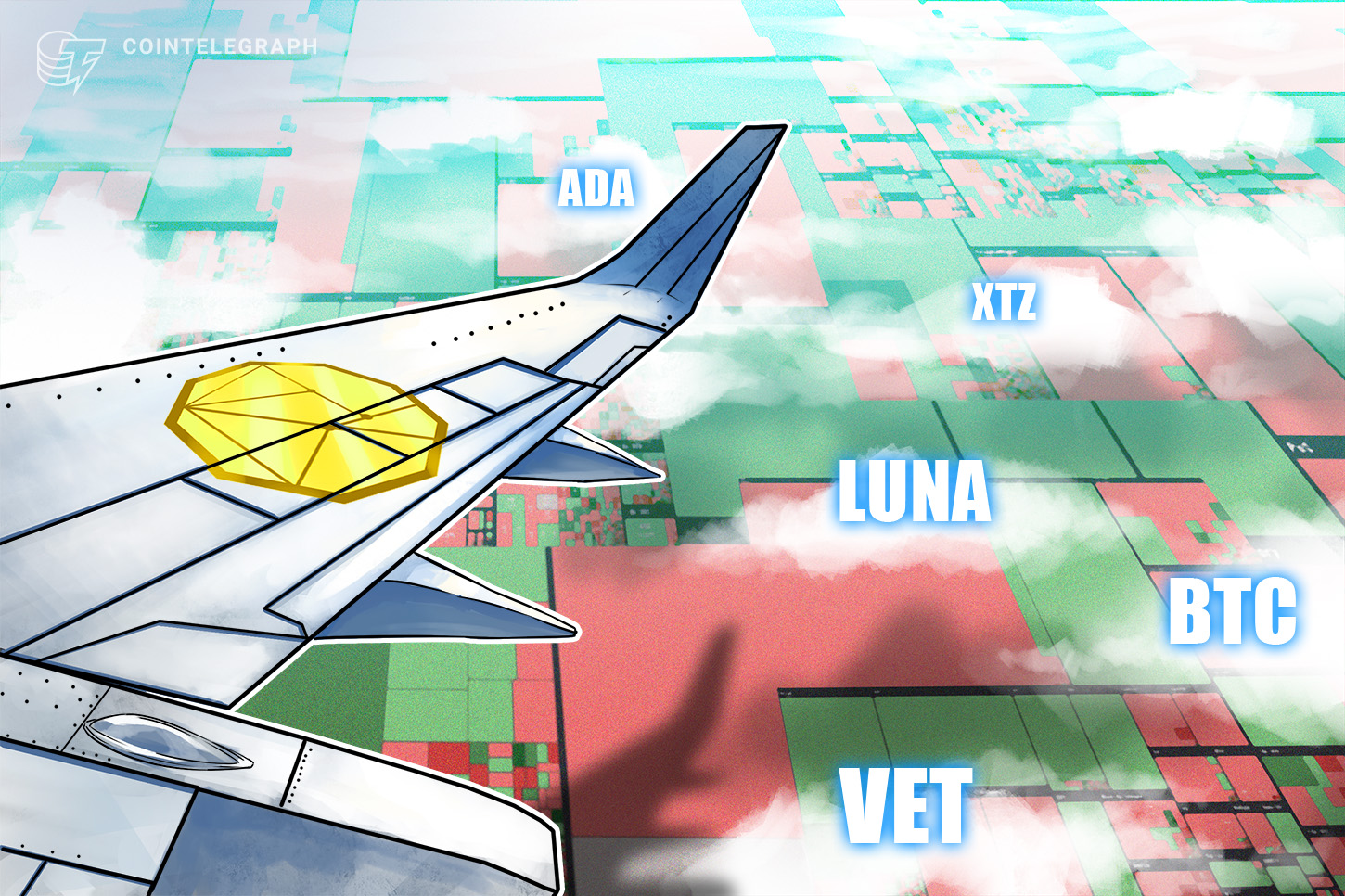 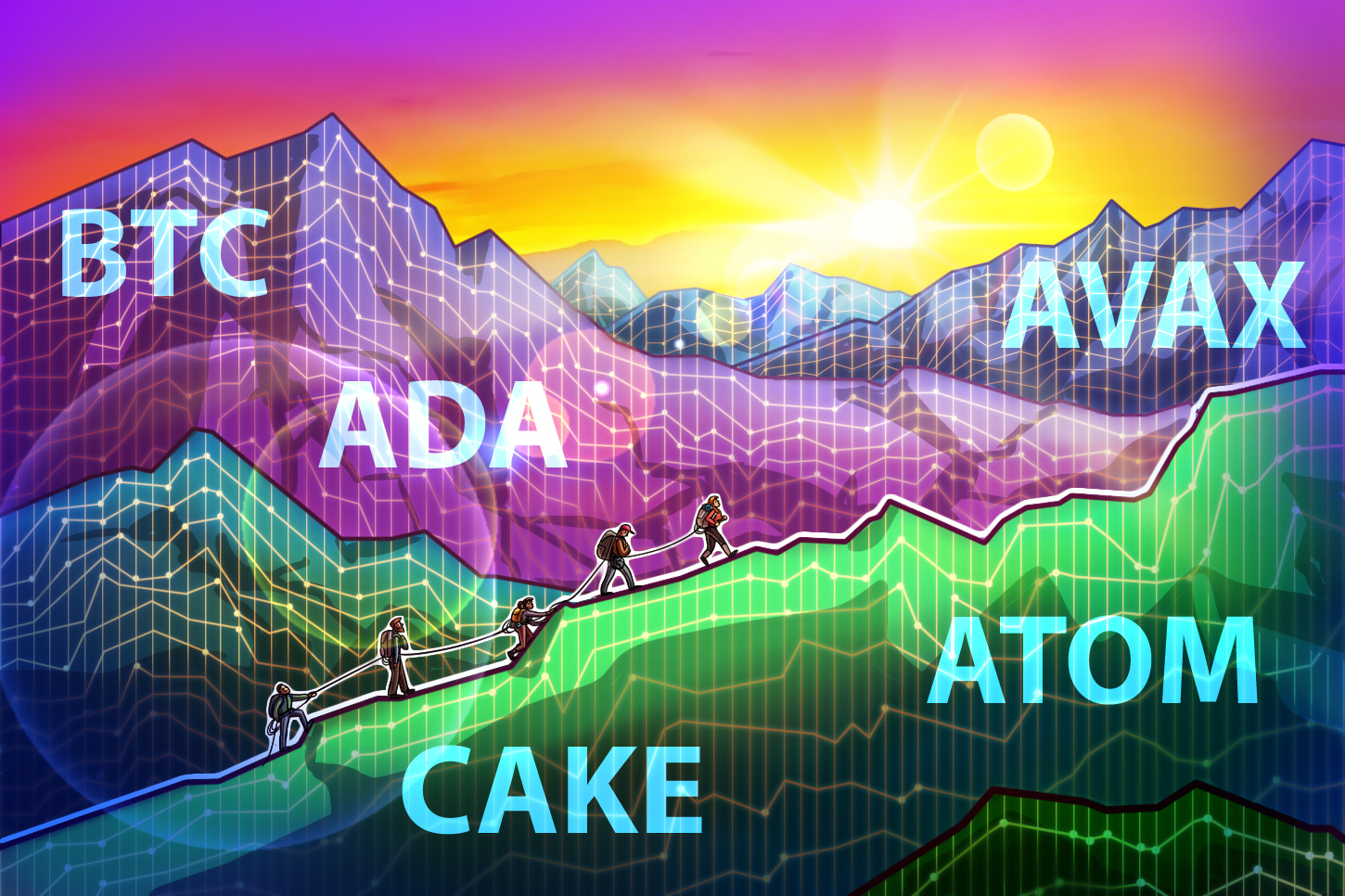 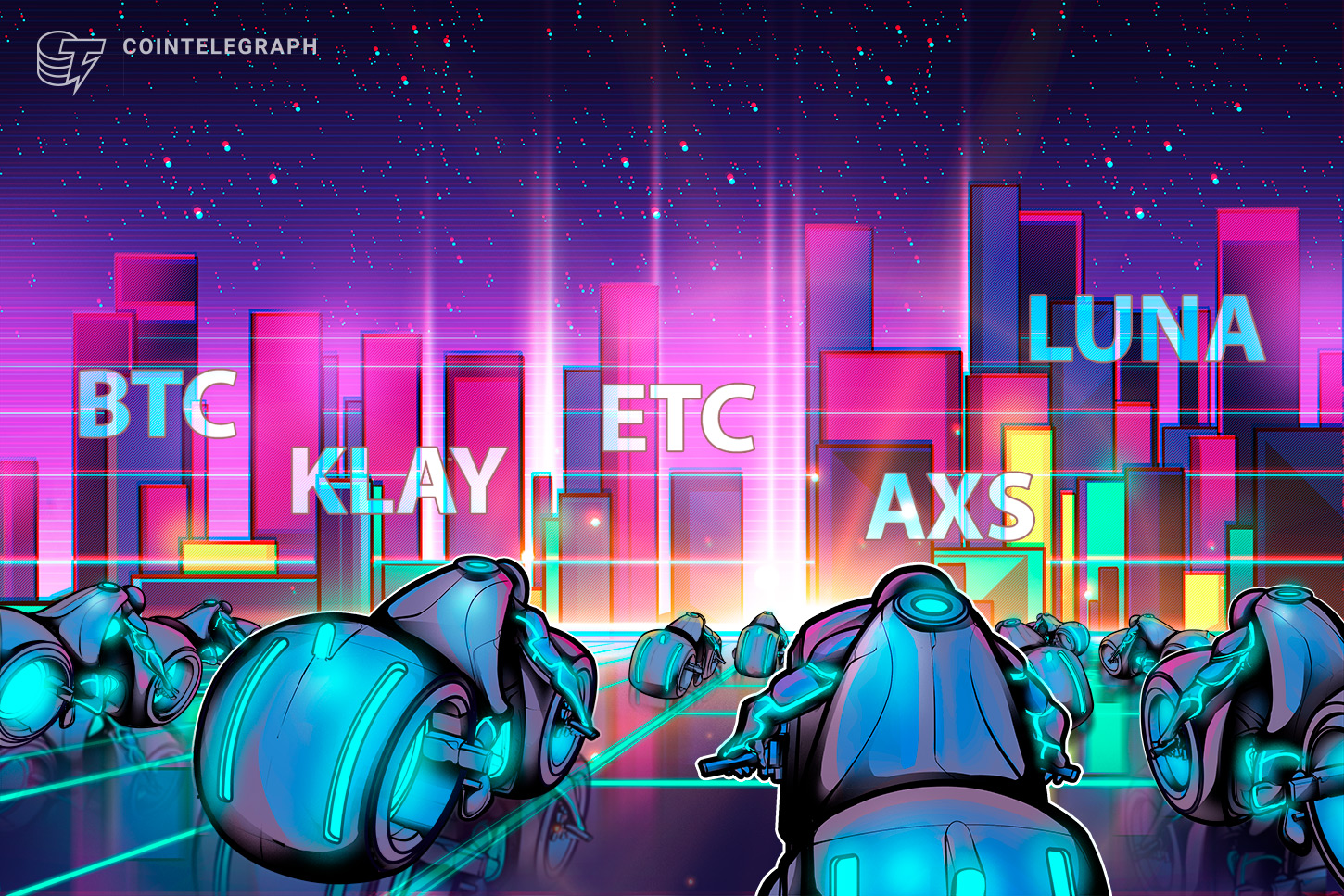