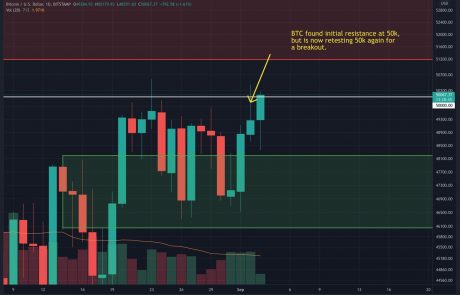 BTC made an intraday push above the critical $50k level yesterday, reaching a high of $50.3k, but struggled to hold onto gains before dropping back below $50k.

$50k is a technical and psychological level of resistance with a moderate amount of BTC moved on-chain, meaning it will take multiple attempts for the bulls to successfully make a close above it. Near term, as long as Bitcoin remains above the lows at $46.3k, continues to make higher lows, and tests $50k, we can expect resistance at this level to weaken, increasing the probability of a breakout. 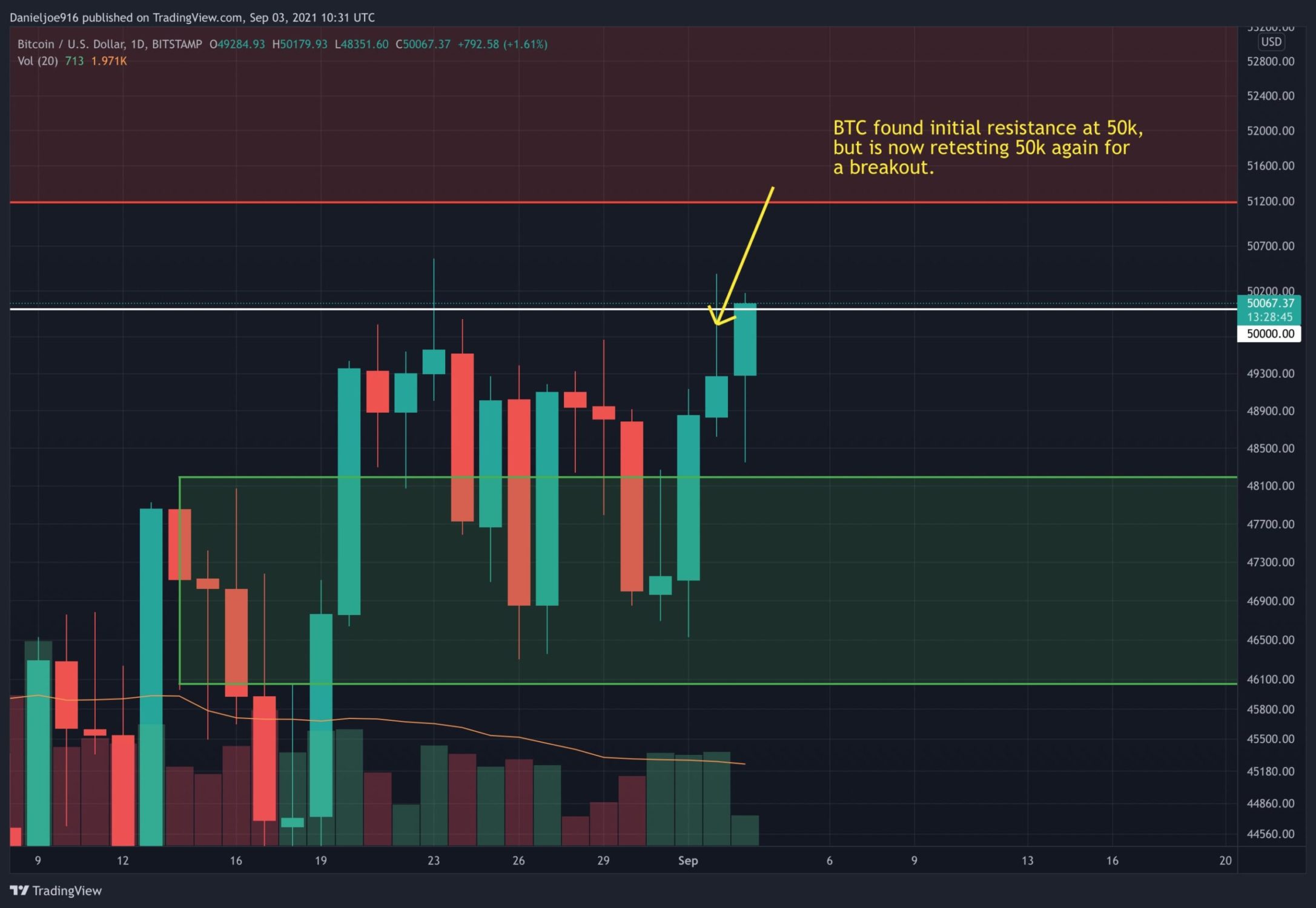 Earlier today, the third-largest Bitcoin whale address transferred another 1,500 BTC to Coinbase, sparking near-term worry of a potential local top at $50k. The whale entity still holds 92.2% of its total BTC position, suggesting this move could be to break even on BTC purchased at current prices, realizing small gains, or rotating into altcoins.

Despite the whale entity moving 9,000 BTC to Coinbase since July and a near-term spike in older coins being transferred, BTC has continued to push higher, a strong indication of supply being absorbed by buyers as shown in the chart below. 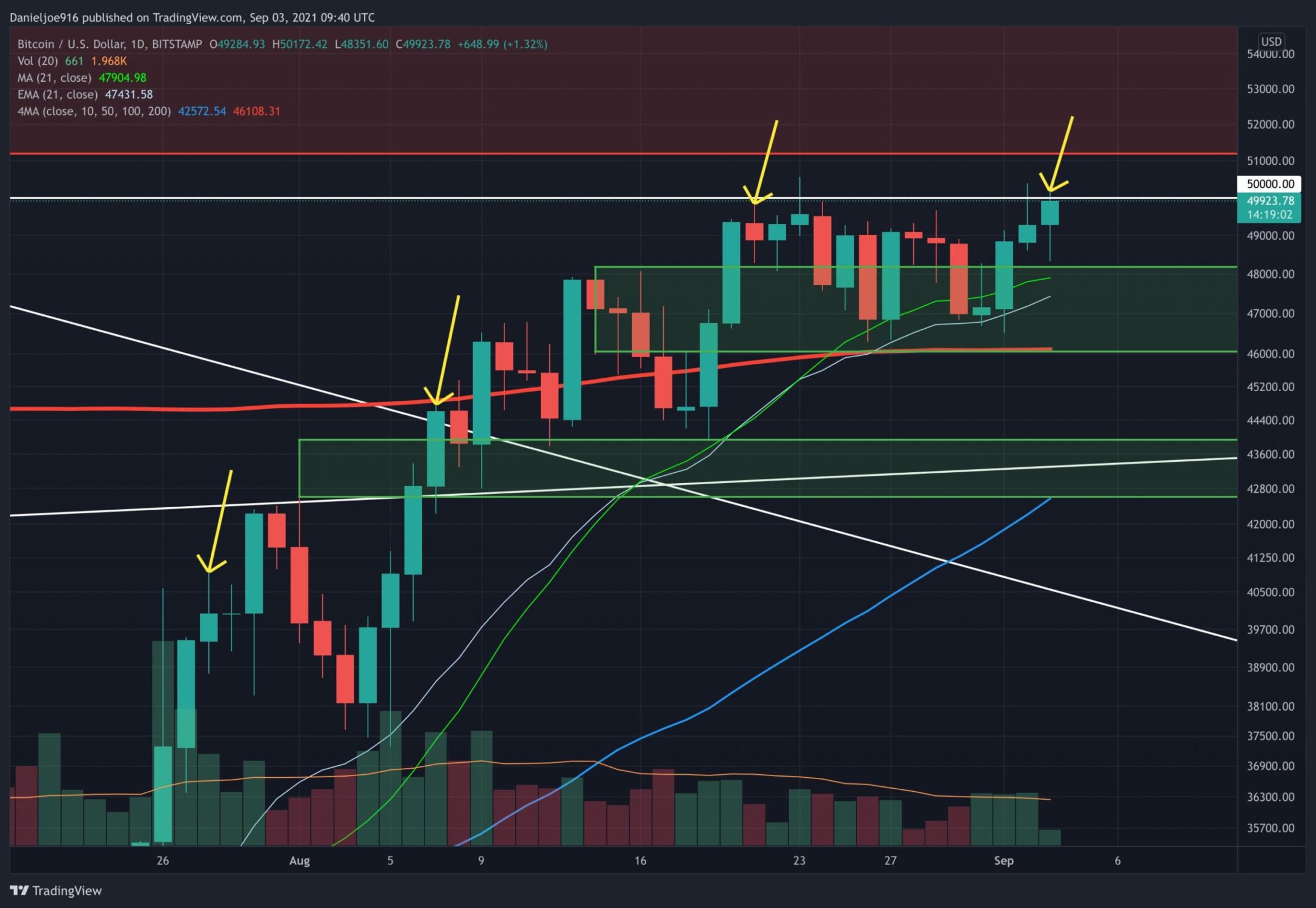 It’s important to note, the whale entity purchased over 24,500 BTC between $48k to $57.9k earlier this year. The 24,500 BTC accounts for around 21% of the total BTC holdings, using a peak of 116,841. Given the higher cost basis on these blocks of BTC, we can expect the whale entity to continue distributing as BTC tests resistance between $50k to $58k.

Despite this near-term signal of caution, we need to consider the aggregate data regarding fundamentals, macro, technicals, on-chain, and momentum. The aggregate data on BTC remains bullish regardless of the whale entity moving 1,500 BTC to exchanges. Spot exchange reserves continue falling to multi-year lows, BTC miners continue to accumulate, supply held by long-term holders is at all-time highs, and the hash rate continues to trend higher. 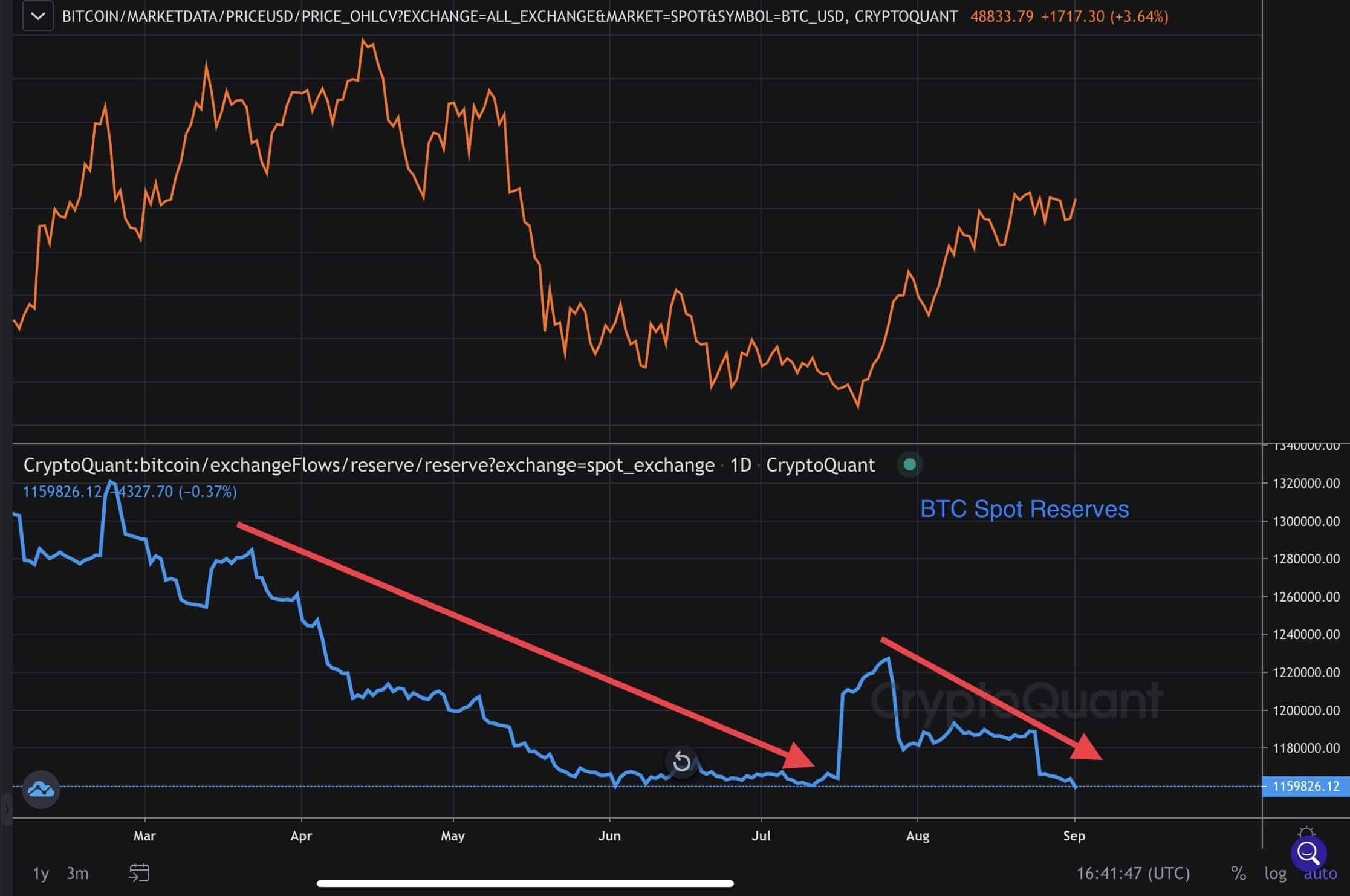 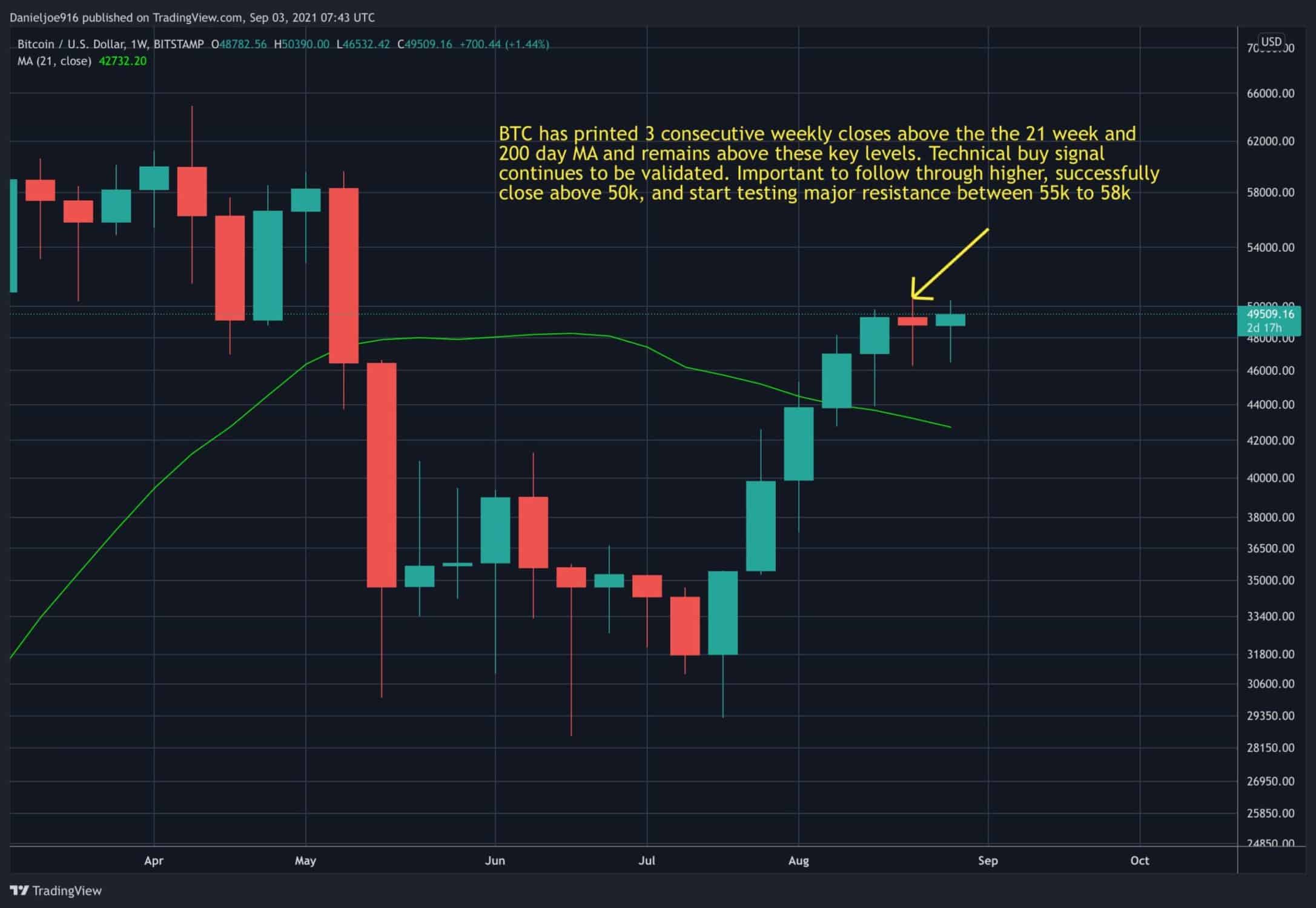 This is a positive sign, especially since BTC bulls have protected the critical 200-day moving average over the last few weeks and continue to make higher lows.

With BTC attempting to break out above $50k, it is important to see prices remain above the near-term lows at $46.3k and continue making higher lows. 4-hour momentum continues to trend higher as BTC continues testing $50k, making the technical conditions look favorable for a breakout.

The UTXO Realized Price Distribution metric had identified $47k as a very strong area of support as BTC’s nearly 2-week consolidation has built a solid base. At this point, it is up to the bulls to continue adding buying pressure to an already supply-exhausted market, aiming to send BTC above the critical $50k level.

As we look out into September and Q4 2021, the macro environment now looks more bullish than before. The Federal Reserve has eased the market on tapering bond purchases and emphasized that rates would remain lower for longer, which is very bullish for stocks and the crypto market. Market participants must keep in mind, if economic conditions weaken, the Fed can easily add more stimulus, likely boosting risk assets, in particular Bitcoin.

As a result of the Fed’s announcement, the DXY (Dollar Index) has fallen while BTC continued pushing higher. This can be seen as a macro tailwind for Bitcoin as a falling dollar has typically pushed BTC higher. 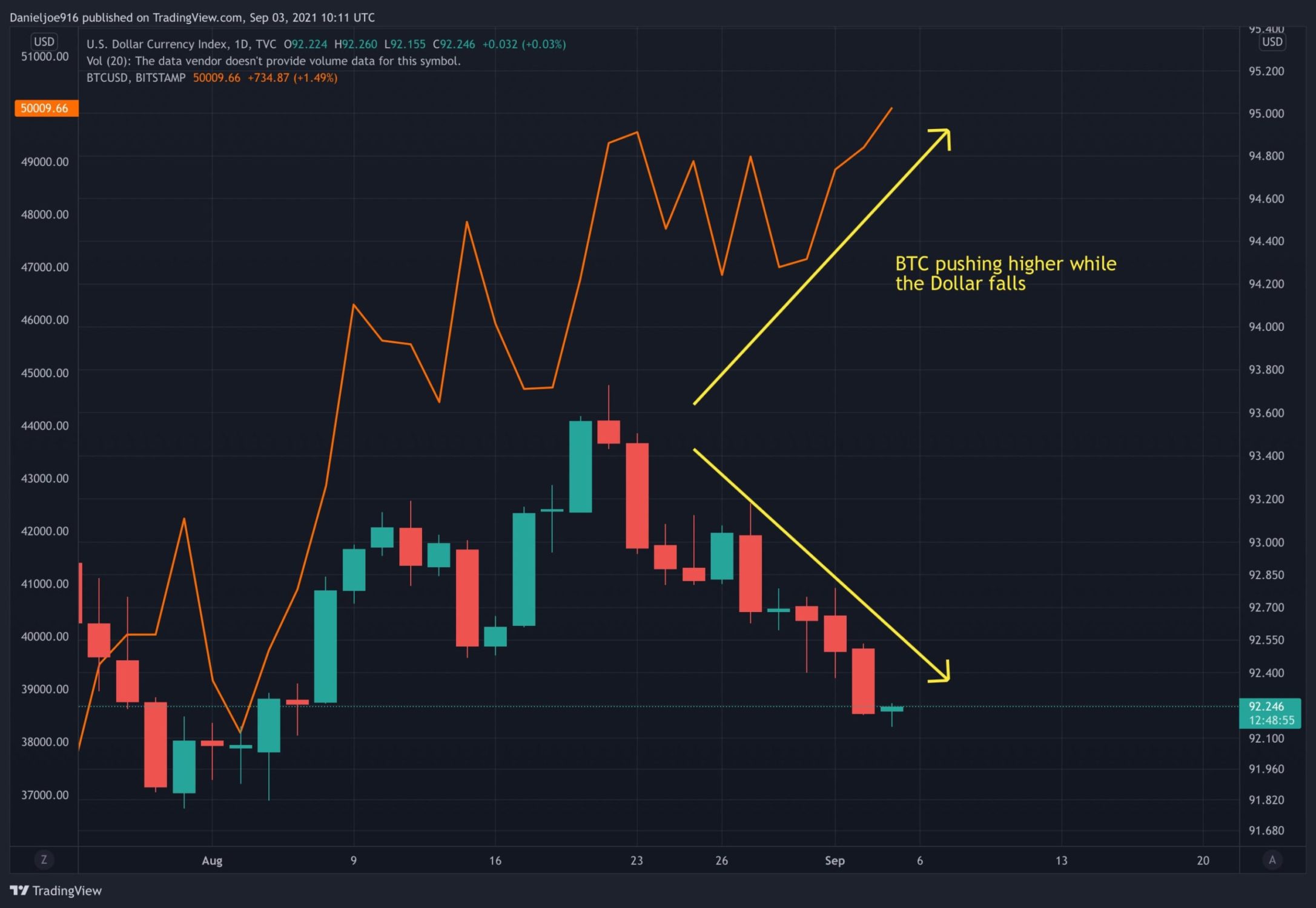 Market participants are eager to see if BTC can successfully close above $50k, likely triggering a powerful move toward $55k to $58k. Even with the whale entity moving 1,500 BTC to exchanges, we have seen BTC push higher despite the 9,000 BTC in total being moved.

Strengthening fundamentals, improving technical momentum, and bullish on-chain metrics continue to suggest a $50k breakout is likely. The bulls and bears will continue to battle it out as BTC attempts to make the fourth consecutive weekly close above the critical 21-week and 200-day moving average. 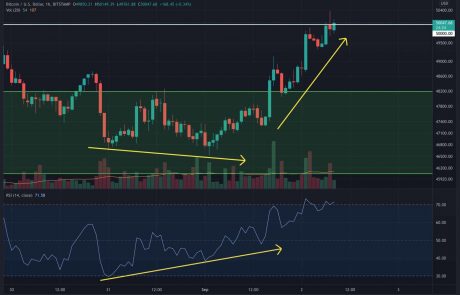 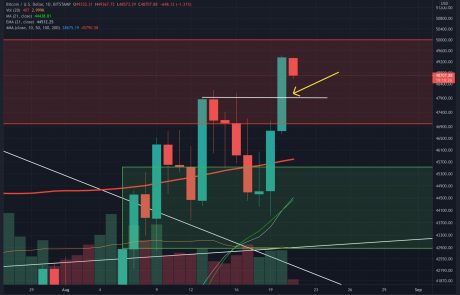 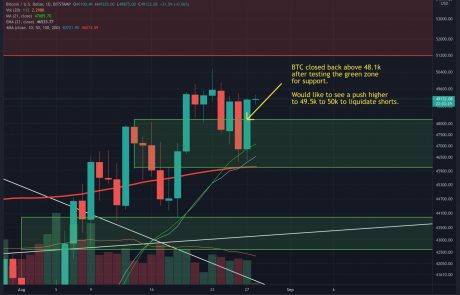