Cardano (ADA) extended its weekly gans to 44% today after registering a new 12-week high of $1.99. The fourth-largest cryptocurrency has been on a song since the launch of the Alonzo Purple upgrade. The Alonzo Purple upgrade would be followed by smart contract integration on the network that would allow Cardano to host Dapps and compete against the likes of Polkadot and Ethereum.

The smart contract integration could act as a catalyst for ADA price quite similar to what London Hardfork did for Ethereum. ADA price jumped from a daily low of $1.68 to record a new two-month high of $1.99, just short of the $2 mark. Once it gets into the $2.0 price zone, the ATH of $2.46 is just a couple of rallies away.

Cardano (ADA) is Just a Rally Away From ATH

The altcoin broke past the key resistance of $1.90 and currently flirting with the $2 mark, and once it manages to get past that, it could post a new ATH very soon and just in time for the smart contract launch. It is less than 20% short of its ATH that could come in a matter of one rally if it continues its current bullish momentum.

ADA’s price rise helped its market cap move ahead of Tether’s USDT and become the fourth-largest cryptocurrency. The next bullish price burst for the altcoin could also make it their largest cryptocurrency ahead of Binance Coin (BNB). The price rise also comes in the wake of founder Charles Hoskinson announcing the final date for the Alonzo upgrade.

In a Tuesday update, Hoskinson has said that the Alonzo update is imminent and he will reveal the actual date of the upgrade on Friday. Many believe the price could be moving in that anticipation too. Hoskinson also took a jab against Polymarket, who had bet against Cardano’s timely smart contract integration.

Should we make them donate to nambla? https://t.co/idLEChOy5N— Charles Hoskinson (@IOHK_Charles) August 11, 2021 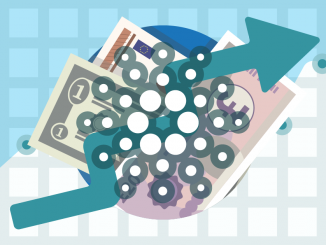