Bulls are giving bears no chances to seize the initiative as the coins from the top 10 list keep growing. 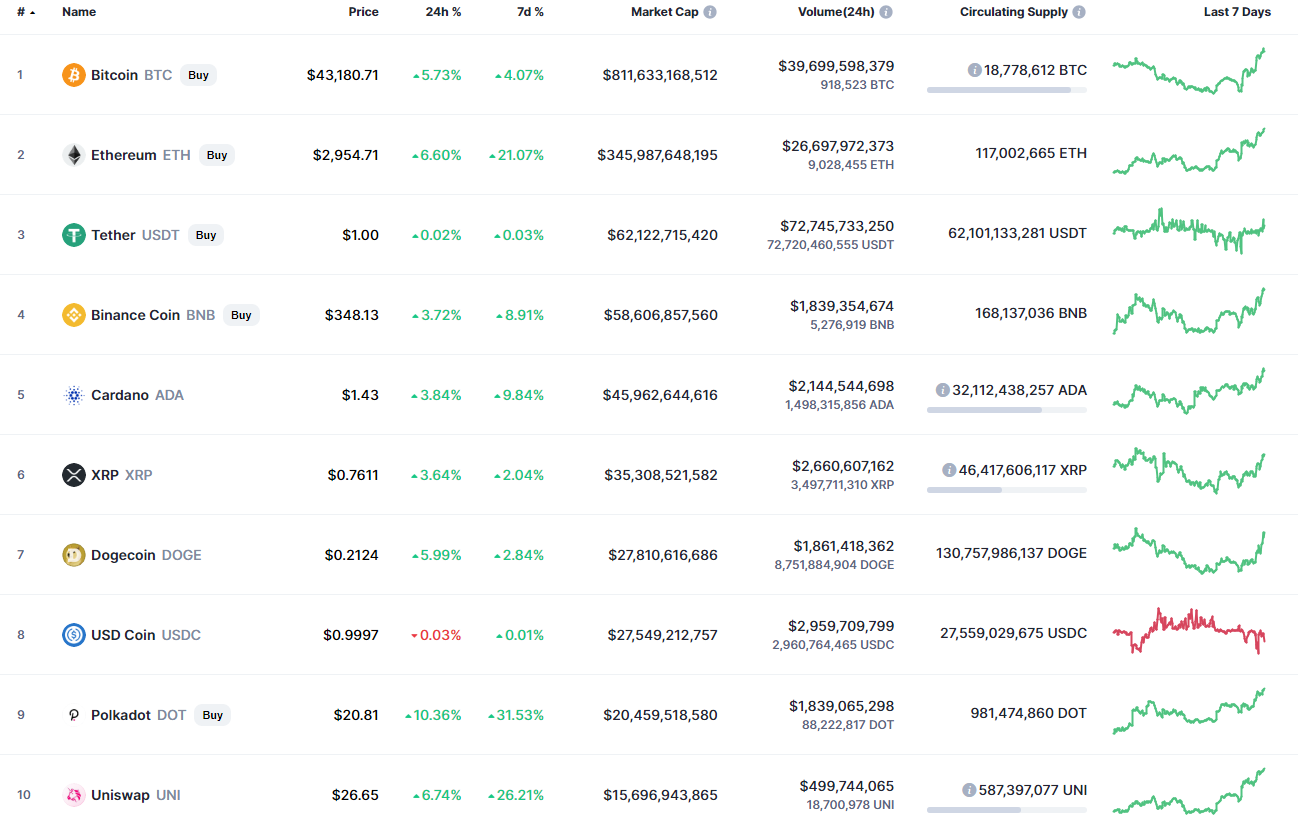 Saturday has begun with the continued bull run of Bitcoin (BTC), whose rate has increased by 5%.

On the daily chart, Bitcoin (BTC) broke the resistance of $42,335 and fixed above it, which confirms ongoing bullish pressure. As it is Saturday, one should not wait for high volatility. However, next week may keep the growth going to the next resistance around $47,000.

Ethereum (ETH) is a bigger gainer than Bitcoin (BTC) as the main altcoin has risen by 7.20% since yesterday.

Ethereum (ETH) has almost touched the resistance zone at $3,117. From the long-term point of view, bulls may have accumulated enough efforts to break this zone; however, the first one may expect a false breakout of it, followed by a bounceback to the area of $2,700-$2,800.

It may be possible by the end of the current week.

XRP has gained the least from today's list as the growth has accounted for 3% over the last day.

XRP keeps locating in a range between the support at $0.70 and resistance at $0.80. Day by day, the price is getting closer to the resistance accompanied by declining trading volume. It may mean that bulls are ready for a breakout. If that happens, one can expect to see a continued rise to the next level at $0.92.

Binance Coin (BNB) is also not such a big gainer as Bitcoin (BTC) or Ethereum (ETH), as the growth of the native exchange coin has made up +3.58%.

Binance Coin (BNB) has fixed above the $342 level, which was the resistance since the end of June. At the moment, the more likely scenario is accumulation in the range between $340 and $350 before growth to the zone of $390-$400.

Binance Coin is trading at $347 at press time.

DOGE is located in the zone of the most liquidity, which means that traders are still gathering power for a price blast. Such a statement is also confirmed by a low trading volume on the daily time frame. Currently, one may expect local growth of the altcoin as enough energy has been accumulated. In this case, resistance serves the recently formed level at $0.23314.