Grayscale Bitcoin Trust (GBTC) shares have narrowed their discount relative to the underlying cryptocurrency held in the fund – possibly a sign that buyers might be using the vehicle to bet on the recent recovery rally in digital-asset markets.

The GBTC shares traded at a discount of 6.6% to net asset value (NAV) on Tuesday, the smallest margin since June 22, based on data provided by the crypto derivatives research firm Skew. The discount had widened to 15% in mid-June.

“The discount seems to have narrowed due to a surge in buying interest in GBTC following weekend’s bitcoin price rally,” Rahul Rai, co-head of Market Neutral at BlockTower Capital, said.

Bitcoin crossed above the critical 50-day average resistance at $35,000 over the weekend and climbed past $40,000 on Monday. At press time the cryptocurrency was changing hands around $40,200, up for an eighth straight day in the longest winning streak since December.

Some investors may have snapped up GBTC shares in hopes that the discount will evaporate with a bull revival in bitcoin. In that scenario, the buyers would reap any price gains on bitcoin while pocketing extra profit from a narrowing of the discount. (Grayscale Investments, which manages the trust, is a unit of Digital Currency Group, of which CoinDesk is an independent subsidiary.)

“The GBTC discount could be narrowing from investors increasing purchases of GBTC for their tax-advantaged accounts on the belief that BTC will continue to rise with the recent run in price,” Martin Gaspar, research analyst at CrossTower, said. 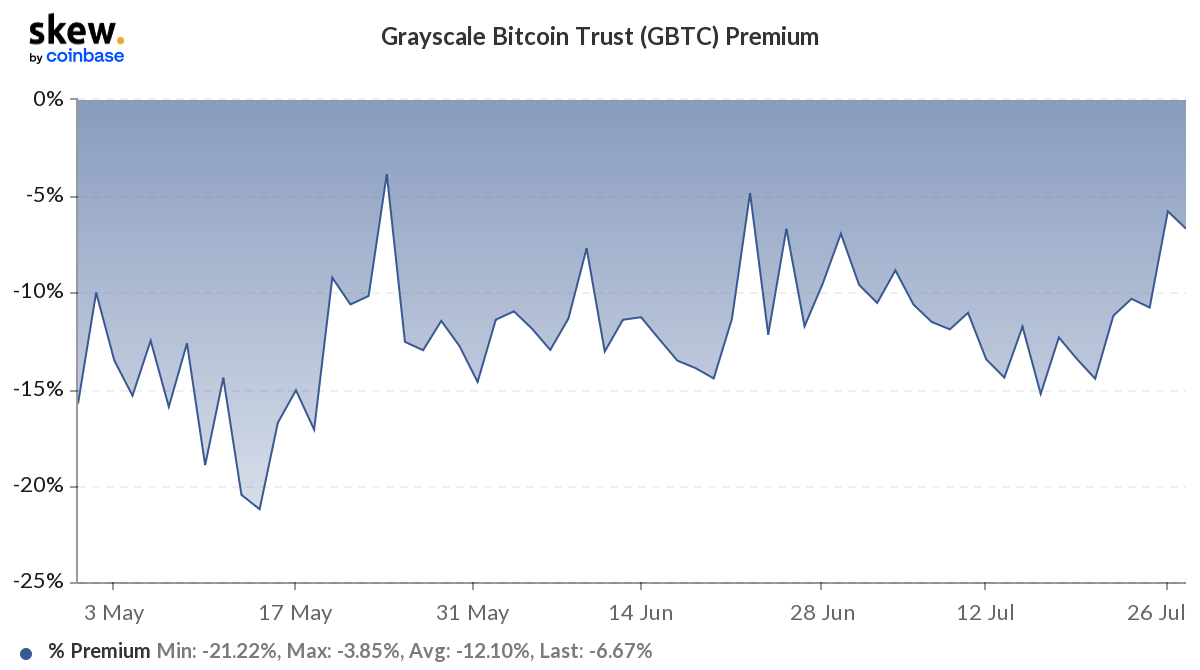 Under the rules of the Grayscale trust, accredited investors – typically institutions or rich people – can buy GBTC shares at net asset value by depositing bitcoin or U.S. dollars into the trust and agreeing to hold the shares for at least six months. There was a strong incentive to do so last year and into early 2021, since the shares consistently traded at a premium; investors would lock up bitcoin, get GBTC and liquidate shares at the premium six months later, pocketing extra profit. The trust witnessed record inflows in the December-January period as the premium swelled to 40%.

However, the shares fell into discount in early February, taking the shine off what was known as the Grayscale carry trade. Inflows into the trust have since dried up and the trust won’t be releasing any shares over coming months. That could be another factor behind the narrowing of the discount.

“The main factor is the fact that we don’t have any unlocks occurring in the foreseeable future,” Vetle Lund, analyst at Arcane Research, said. “Over the last months, massive unlocks have occurred, leading to constant and massive selling pressure of GBTC shares.”

The trust unlocked some 40,000 shares in July. That represents potential selling pressure, since investors have an option to liquidate holdings in the secondary market. However, that selling pressure no longer exists; data from the firm Bybt shows there are no more unlockings at least until early 2022.

Existing GBTC investors may be holding on to their shares – reducing selling pressure from the market – while new investors may be snapping up shares at the discount in hopes that the trust will be converted into an exchange-traded fund (ETF) in future. Such a conversion might cause the shares to trade more regularly in line with the value of the trust’s bitcoin.

“There may also be speculators buying GBTC in the hopes of profiting off the discount if GBTC is able to convert into an ETF,” CrossTower’s Gaspar said.

Grayscale Investments said in April it was committed to converting the Grayscale Bitcoin Trust into an exchange-traded fund (ETF). The world’s largest digital assets manager recently hired the New York-based bank BNY Mellon to handle accounting and administrative services for GBTC from October. The trust said the relationship will eventually morph into transfer agent and ETF services provider for the GBTC ETF, when and if it’s approved by regulators.