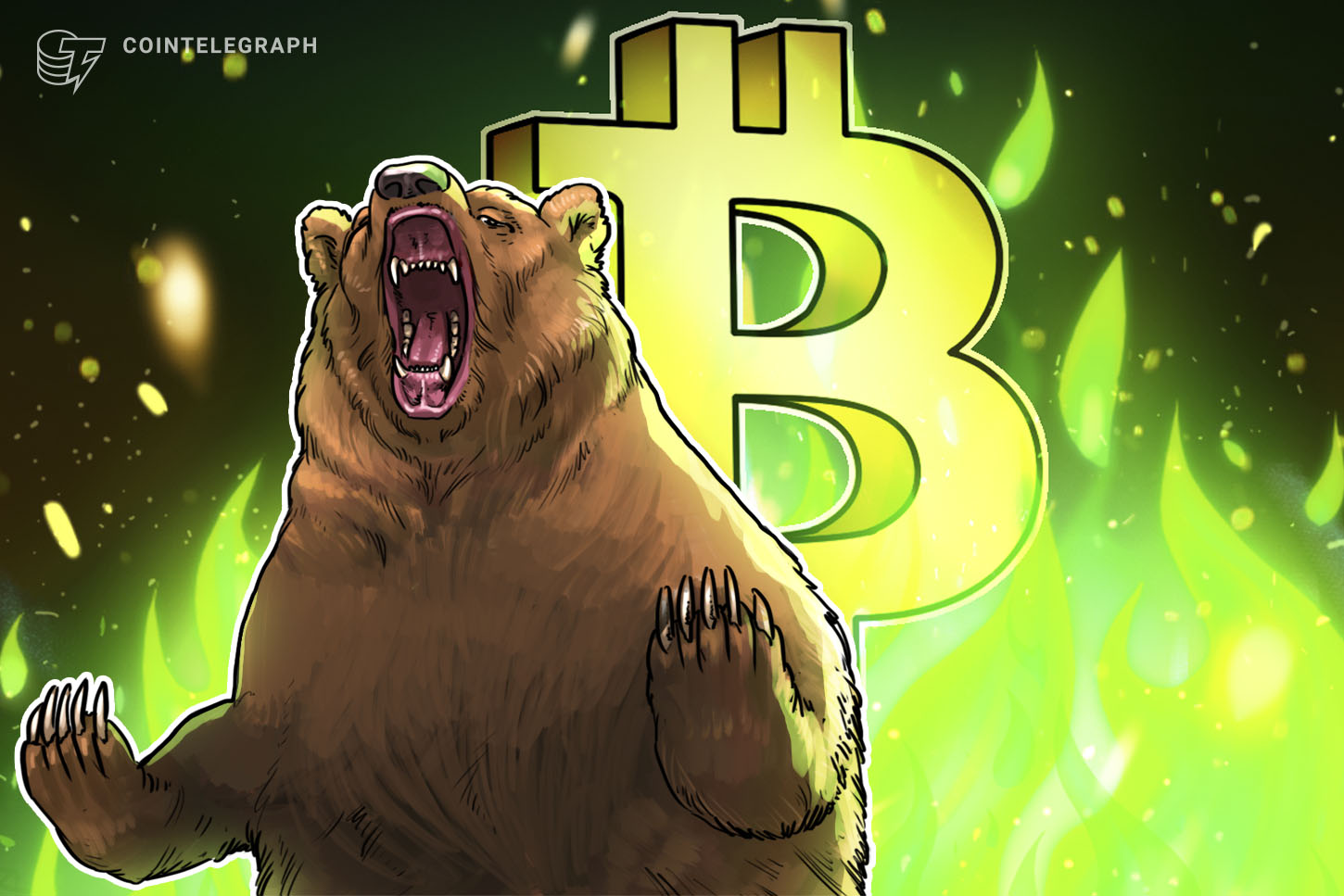 Bitcoin (BTC) is nearing $40,000 this Monday as a new week gets underway with a bang for bulls.

A calm but confident weekend culminated in a dramatic run-up overnight Sunday, with BTC/USD swiftly nearing the top of its multi-month trading range.

With favorable fundamentals and a lot of liquidated bears, Bitcoin looks set to investigate levels not seen in several weeks.

What could shape price action as the week continues? Cointelegraph takes a look at five factors to consider when charting BTC price action in the coming days.

Spot price action is, naturally, the topic on everyone’s radar at present — in 24 hours, Bitcoin has sealed gains of nearly 15%.

While not yet flipping $40,000 to resistance, current levels have not been around since mid June, and appetite for bullishness is palpable.

It began slowly following last week’s “The B-Word” conference, which featured praise of Bitcoin from the likes of Jack Dorsey and Elon Musk.

A breakout was not immediately apparent, however, and progress was slow as analysts remained wary of a market that they thought could still easily collapse to new cycle lows.

In the event, however, Bitcoin slowly inched up through the week, taking out $34,500 over the weekend and opening up the prospect of a run higher.

An impulse move was widely anticipated, including by Cointelegraph contributor Michaël van de Poppe, with potential targets lying within the established medium-term range with $42,000 as its ceiling.

On Monday, however, even van de Poppe appeared taken aback by the veracity of the move higher, calling it a “surprise.”

“Some are doing great in their BTC pairs, as Cardano and Ethereum are bouncing nicely. Great!” 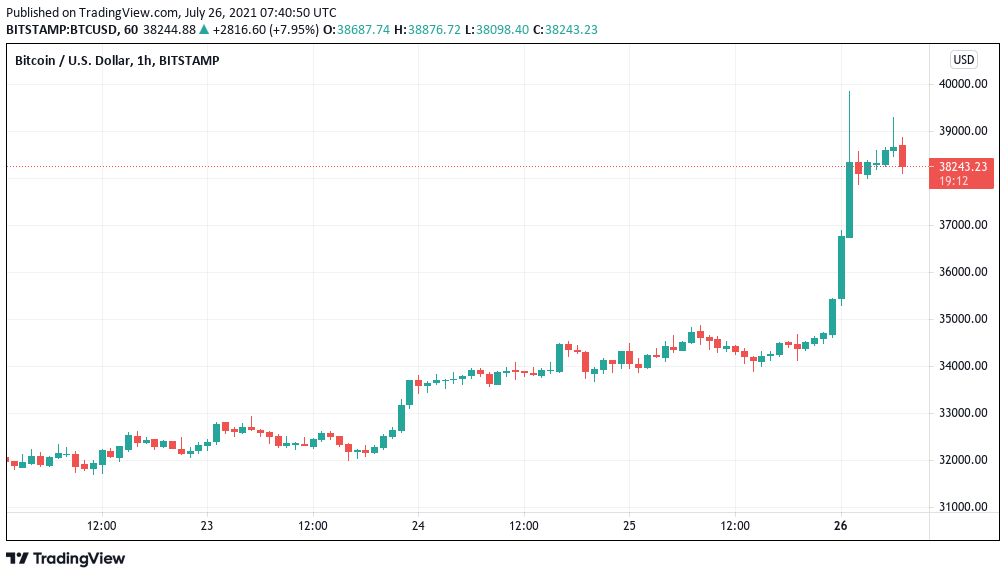 Fellow trader Crypto Ed was more cautious. Highlighting Elliott Wave analysis, he argued that even a return of the bull market would not be without its sticking points, and that $29,000 could still return after $42,000 in line with his previous predictions.

For those who follow Elliott Wave: technically spoken, the move to new lows is still possible as long as we don't break white 2. But based on the lower TF labelling of this impulsive move, I'd expect a break above 2 and invalidating the move ot 26-27k1/2 pic.twitter.com/M4FJ4YRdrI— Crypto_Ed_NL (@Crypto_Ed_NL) July 26, 2021

“Doesn't mean we go up in 1 straight line, pullbacks/corrections/retests will happen after we break 42k but new lows are very unlikely to happen once 41.5-42k is broken,” he reasoned Monday.

Bitcoin’s declining relationship to traditional markets is back in the spotlight, making price action look all the more “impulsive.”

Whereas rising stocks have been accompanied by flat or even negative performance in BTC/USD recently, the tables have turned over the past few days. Now, equities are treading water over headwinds from China, while Bitcoin soars.

A crackdown from Beijing has overshadowed previous strength in U.S. markets, and this combined with increasing worries over inflation and central bank stimulus tapering makes for a shaky mood, an analyst told Bloomberg Monday.

“The second half of the year is going to be this glass half-full, half-empty context,” Virginie Maisonneuve, global chief investment officer for equity at Allianz Global Investors, told the publication’s TV network.

As Crypto Ed continues to stress, meanwhile, the strength of the U.S. dollar is also worth paying attention to in the short term. Currently still on a rebound, the U.S. dollar currency index (DXY) is expected to hit local highs around the 94 mark before falling again, this latter move giving Bitcoin some real breathing space.

Until then, however, DXY could ultimately pressure cryptocurrency markets.

“Expecting DXY to drop more in coming days, BTC should see more relief bounce because of that,” he said Thursday alongside an accompanying chart.

“As tweeted a couple of times before: real strength for crypto returns when DXY completed the move to the red box and goes for the green box.” 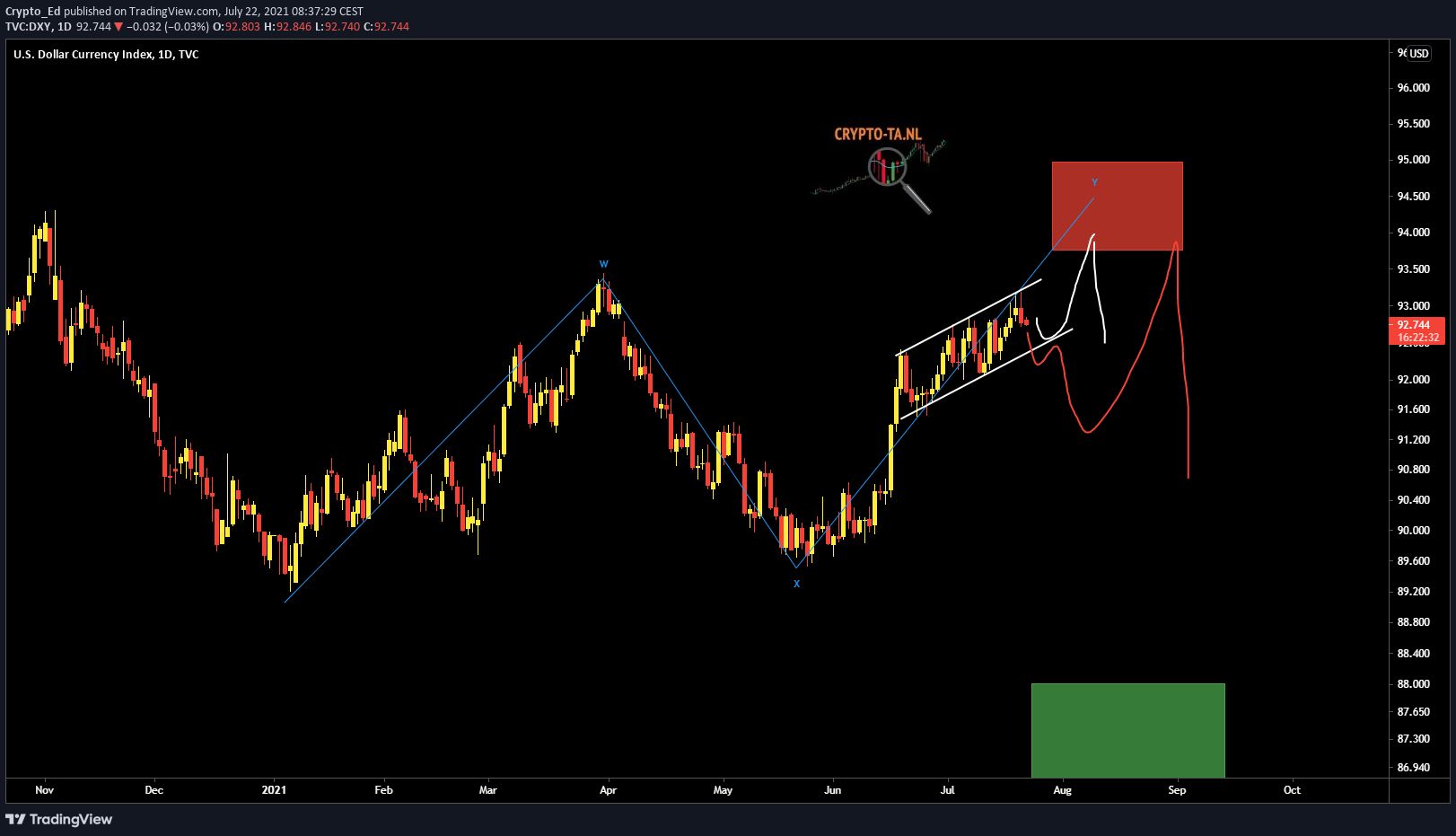 Is up always good? Not if you’re short BTC.

As commentators were already suggesting recently while BTC/USD was still close to $30,000, the “maximum pain” scenario would likely not be fresh losses, but rather a dramatic reversal to the upside.

That is exactly what happened — the 15% overnight gains took a serious toll on those market participants who were convinced that a crash was incoming.

According to monitoring resource Bybt, 24-hour liquidations totaled $1.1 billion on Monday, the most since May 18. 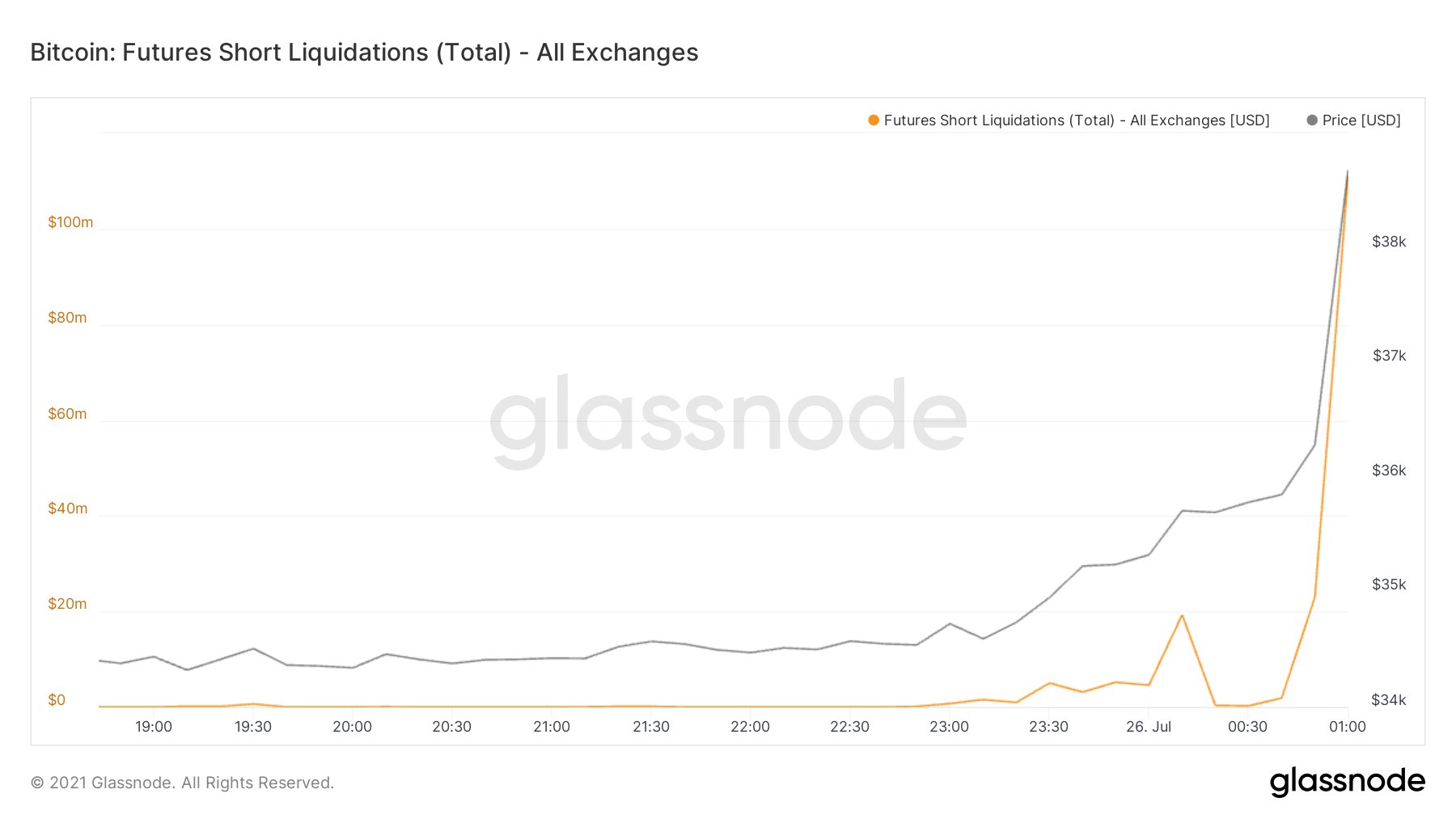 It’s far from the first time that bears have been caught unaware — the nature of Bitcoin has ensured time and time again that those who are overly negative ultimately get pushed out.

A recovery in Bitcoin fundamentals which has been underway much longer than price continues unabated this week.

Hash rate is approaching 100 exahashes per second (EH/s) again, a positive sign which has been accompanied by increasing decentralization of hash rate overall.

Gains have been brisk over the past week when the hash rate was still lingering near local lows of 83 EH/s. At its height before the price drawdown in May, the hash rate reached 168 EH/s.

A similar story is apparent in network difficulty, which at the time of writing is forecast to increase by around 3.7% at the next readjustment in five days’ time.

If it happens, it will be the first positive difficulty change since May’s mining rout, and a strong signal that the effects of the accompanying upheaval have been mitigated. 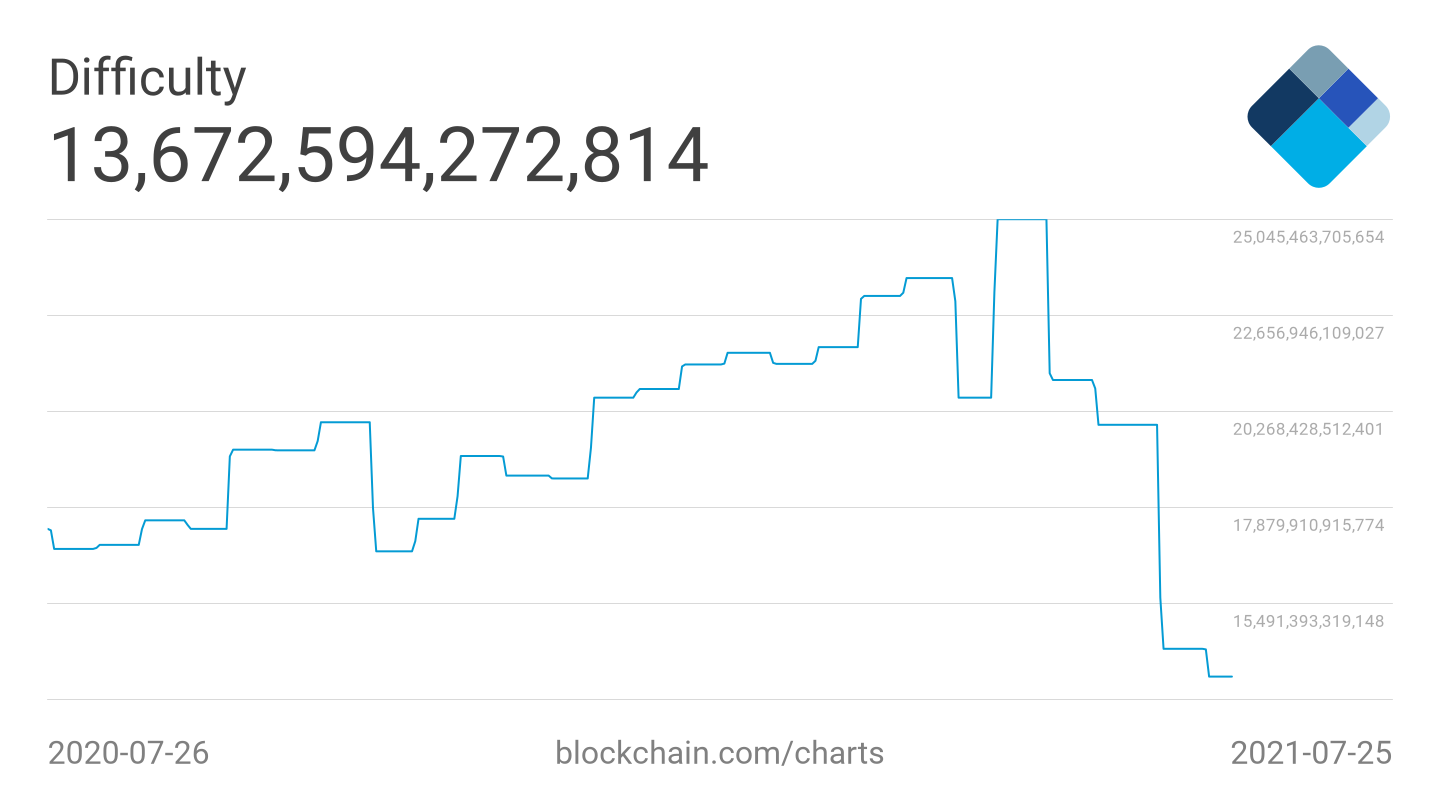 While dubious as a topic, the concept of Bitcoin’s “eco-friendliness” remains an important topic, with large miners leveraging the narrative to reassure skeptical markets of Bitcoin’s longevity.

The statistics speak for themselves — renewable and sustainable energy is increasingly powering the Bitcoin network as miners relocate to suitable jurisdictions.

Those worried that the price gains may be a case of “too much too soon” can take heart in the relatively calm sentiment which has accompanied them.

According to the Crypto Fear & Greed Index, the shift towards $40,000 has not changed the overall market mood based on “fear.”

On Monday, the Index measured 26/100 — signaling fear, rather than greed or a “neutral” atmosphere — with the implication that Bitcoin could rise further without investors feeling overly greedy and apt to spark a sell-off.

“Bitcoin fear and greed index has been under 40 for over 2 months - the longest ever time period,” Danny Scott, CEO of exchange Coin Corner, noted last week. 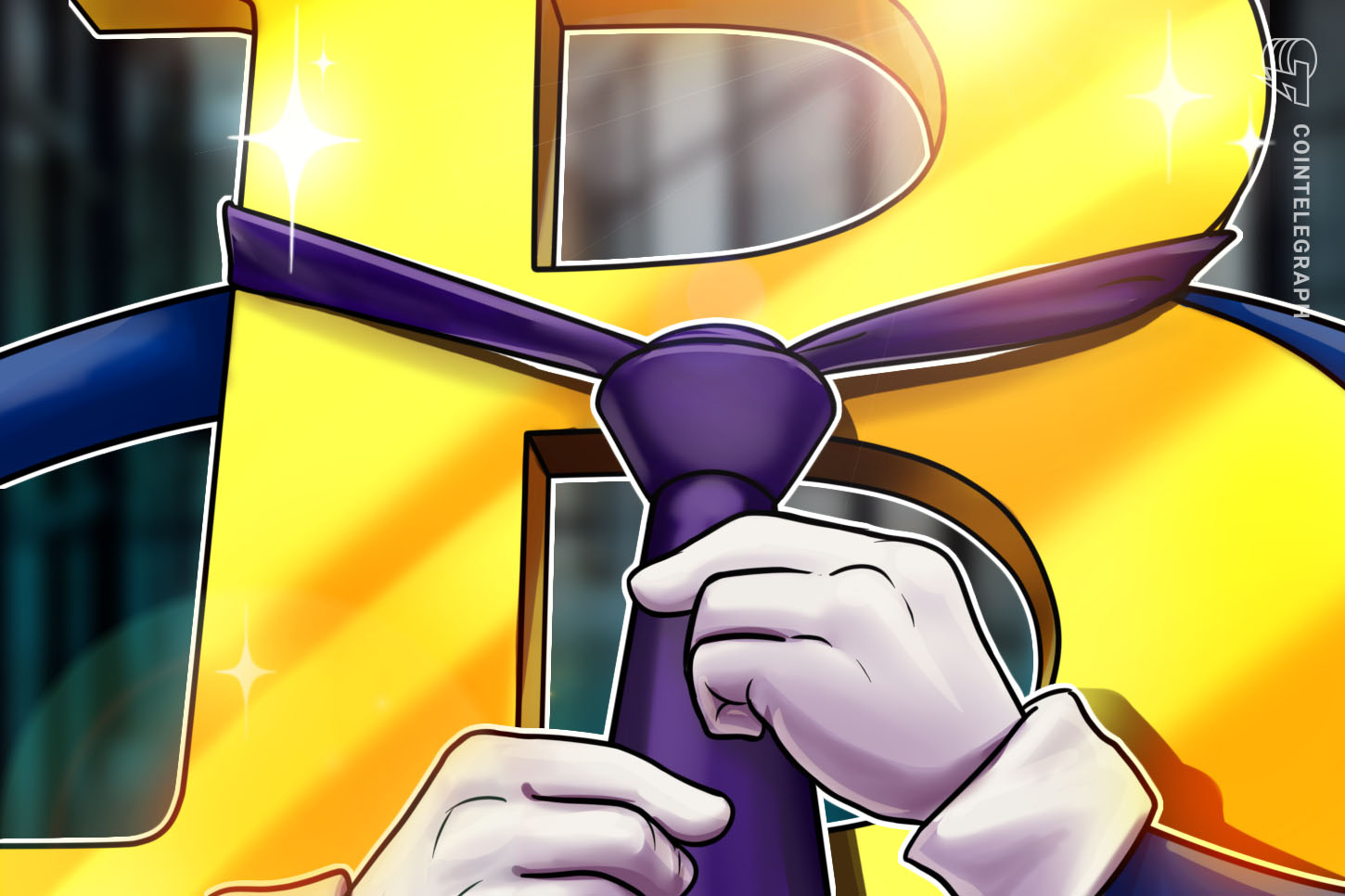 Countdown to Grayscale's big BTC unlock: 5 things to watch in Bitcoin this week 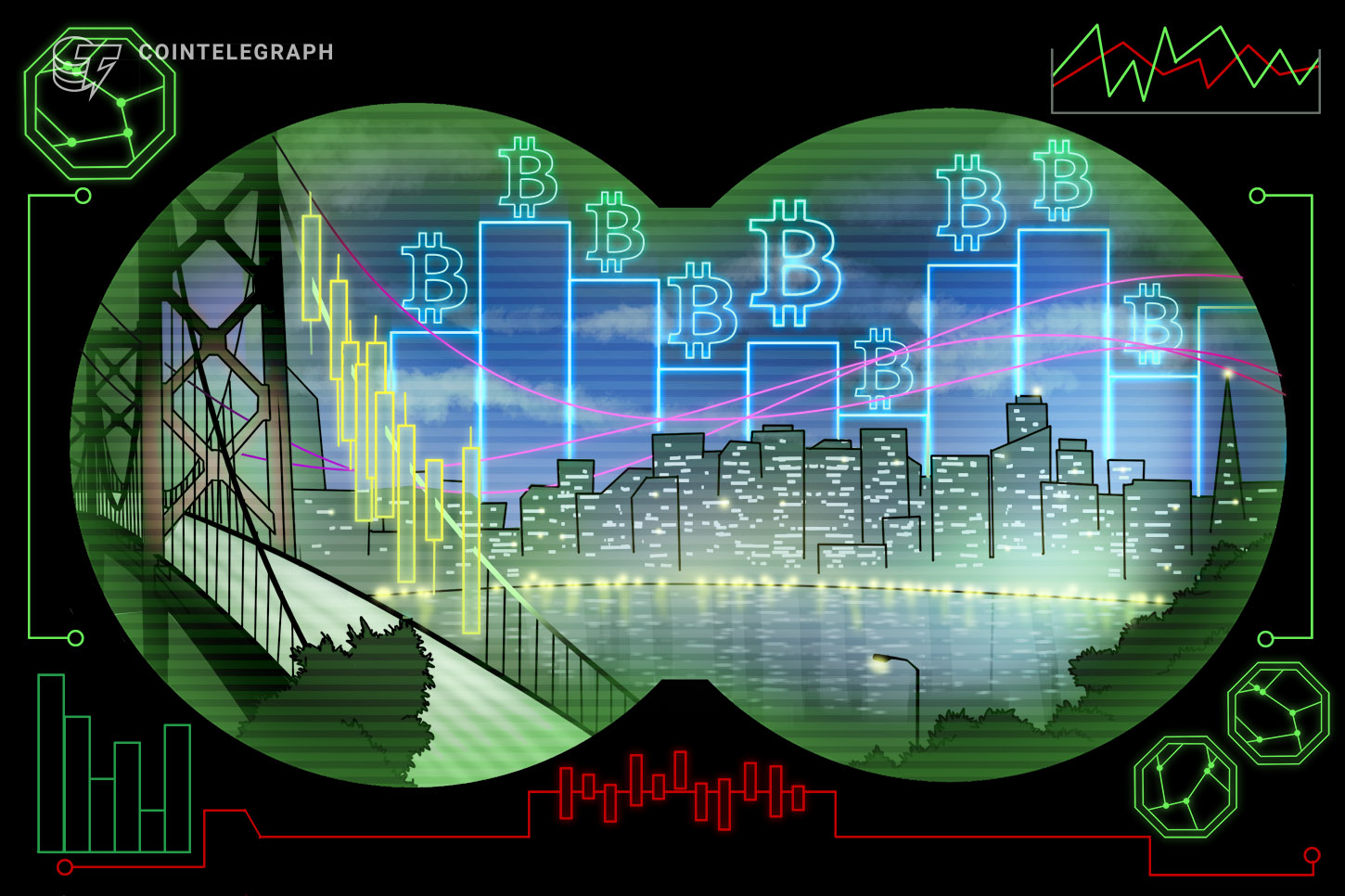