The Ethereum community is eagerly waiting for the Proof-of-Stake protocol to kick in and resolve problems relating to scaling on the network. However, given the history of delays with each leg toward implementation, developers have assured that the launch of London Hard fork will be on schedule.

“…the only cause that could lead to the delay would be security concerns. However, until now the team did not have any such concerns and the London upgrade will be activated on the Ethereum mainnet between 3-5 August on block 12,965,000.”

What to expect when the London upgrade goes live?

Well, it is no news that that EIP-1559, a part of the London upgrade, would reduce the income of miners. However, the miners clarified,

“First, EIP-1559 removes part, but not all, of the transaction fees that go to the miners.”

Instead, every block will have a specified “baseFeePerGas.” This would be the minimum gas price users will have to pay for the transaction to be valid. This “base Fee” times the gas used by the transaction will be burnt. However, transactions will also specify a “priority Fee” which goes to the miners.

The developers explained this fee was like a “tip” and it compensated miners for the increased risk of their blocks being uncled, or removed from canonical chain, when they include transactions.

Additionally, Miner Extractable Value [MEV] will be paid by users who want their transactions to be included as the first transaction in the blocks. This feature was being actively used as the developers noted that about 60% of blocks have MEV transactions, compared to close to 0% at the beginning of the year.

What about miners’ profits?

Even though miners were not exactly at a loss, some were looking out to find other revenue sources. However, multiple factors affected miners’ profitability. These include the demand for the network, hash rate, and Ether’s price, as the miner revenues were mostly in fiat and not in ETH. 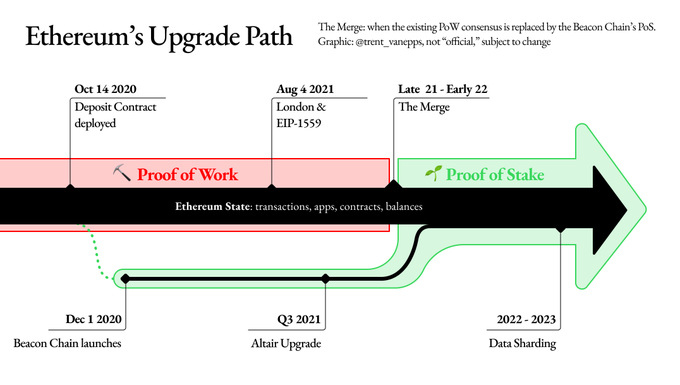 As per the developer Hsiao-Wei Wang,

“*IMHO* merging in early 2022 is more feasible to be confident of finishing the required testing in time. Security is always the top 1 priority, and we definitely would not rush into it.”

As mentioned before, security has remained the main facet for the developers and was also among the list of challenges for transitioning into PoS. The team was trying to tackle other challenges like the UX, communication concerning governance and education, and implications of their current specifications.

Competitors picking up the slack

While the timeline of the ETH 2.0 has seen alterations due to bugs or other reasons, the crypto space was all about challenging the existing systems. Given the high fees and slow transactions ailing Ethereum, projects such as Binance Smart Chain and Polygon emerged as Ethereum competitors. In fact, the problems on the Ethereum network have boosted Polygon’s adoption, but developers were not worried about the “competition”.

“As people involved in core development of Ethereum, we try to focus on our core strengths and not get distracted by worrying about “competition.” Developers and users are free to build / use whatever they like. We will continue to develop Ethereum to be robust and secure for the projects / users it has.”

Beiko and other developers of Ethereum remained mainly focused on the Layer 2 protocol which aimed at providing more secure and trustless functions as sidechains or other L1s to the users.

As the exact repercussions of the London upgrade remain unknown, the miners, developers, and users will all have to wait for launch early in August. In the meantime, investors can relish ETH’s 20% recovery over the past three days. At the time of press, ETH was trading at $2,062.