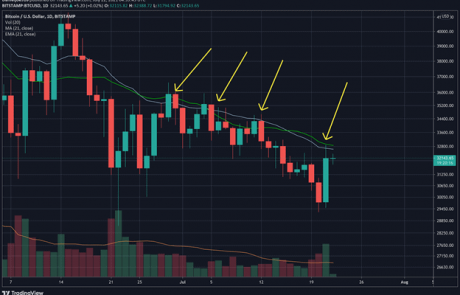 Earlier this week, BTC made a daily close below the critical support at $30k, which can be seen as a bearish technical signal. On that day (Tuesday), the aggregate volume was significantly lower than previous drawdowns such as the May 19th selling climax when the volume clocked in at $38.5B compared to the $4.8B we saw on Tuesday – an 88% decline.

This can be seen on the following chart: 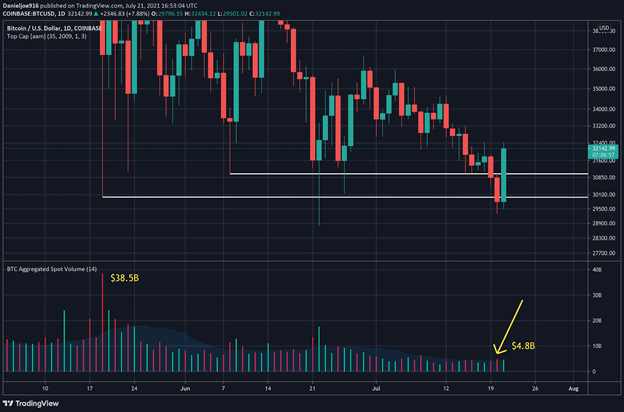 A low volume close below support, especially during a long consolidation, is usually not a major sell signal. The low volume selling likely came from short-term holders (which sell at a loss), small miners, retail, and traders, which make up a small percentage of the total BTC supply.

On the other hand, long-term holders, large miners, and entities holding illiquid supply, which make up the majority of total BTC supply, have not been selling according to multiple on-chain metrics. If these large cohorts were to sell, we would have seen the aggregate volume soar to tens of billions of dollars on the day BTC closed below $30k.

Sentiment once again reached peak bearishness, as crypto Twitter continued to make calls for BTC to fall to $20k, $15k, and even $10k. Moments like this are when BTC surprises the entire market, as the majority is usually wrong. Yesterday’s daily candle was a very large bullish engulfing one, closing above the two previous daily candles.

The recent rally pushed BTC from an intra-week low of $29.3k to a high of $32.8k, finding initial resistance at the 21 days MA line as can be seen below: 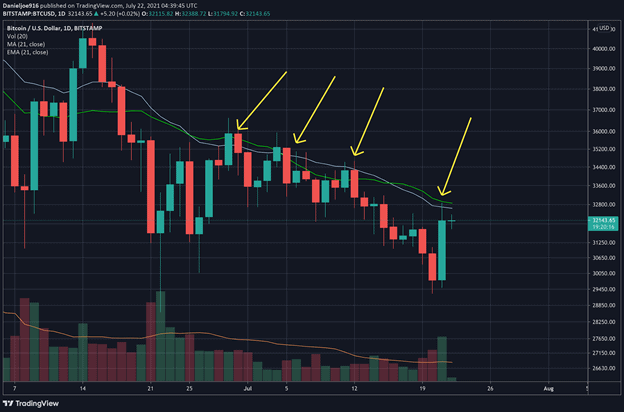 During the recent price surge, miners’ flows to exchanges registered a few notable spikes, suggesting small miners were selling into strength as this cohort is more price-sensitive due to more challenging capital requirements to operate. However, miner flows have dropped significantly, indicating their selling pressure has fallen and small miners may have capitulated. 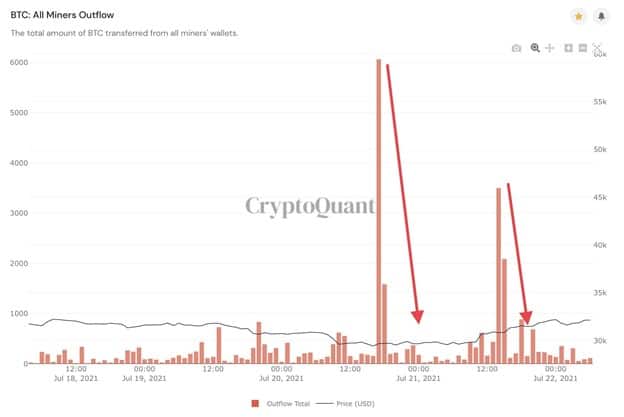 The daily RSI has formed a 7-month long downtrend consistently finding resistance with each attempt higher. The recent push has helped the daily RSI to start moving above the downtrend line. This is an early bullish signal for BTC on the daily chart, but will require a follow-through to the upside for validation. 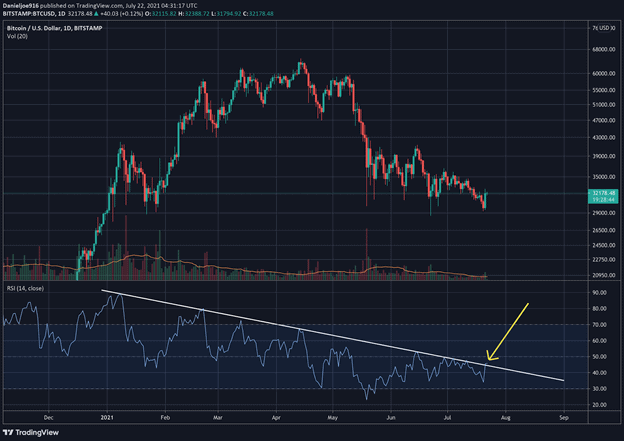 BTC also managed to close above this near-term downtrend line with strong volume, and successfully backtested the trend line as support. The price action so far is showing early bullish signals of momentum slowly trending higher. BTC is now at a point where the price must follow through to the upside in order to validate the first major step of a potential recovery.

With Elon Musk, Cathie Wood, and Jack Dorsey speaking at the B-Word event yesterday, this could be one of many near-term catalysts to spark a recovery.

Musk made it clear that his companies Tesla, SpaceX, and himself own Bitcoin and are not selling. He also confirmed his improving view of the cryptocurrency becoming cleaner with mining and that it is highly likely Tesla will resume accepting it as payment.

These positive developments could certainly help BTC reclaim $30k, and continue the near-term momentum higher as more certainty returns to the market. It is very important for BTC to reclaim $30k on a weekly closing basis which will form the snap-back scenario. 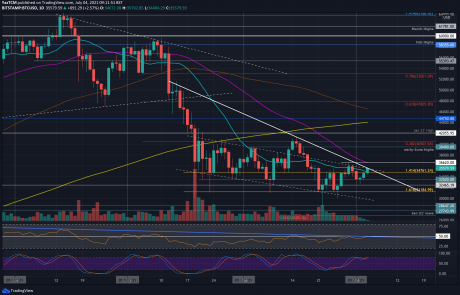