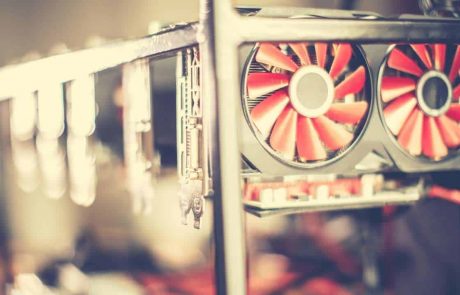 BTC charted an intraday below 30k, a major level of support that has held on a weekly closing basis during the 2-month-long consolidation.

Although it has been struggling to recover, one trend remains clear, long-term holders (strong hands) and stronger BTC miners have been accumulating rather than selling.

Bitcoin miners can be seen as one of the most bullish entities in the market. They invest millions, if not tens of millions of dollars, building energy infrastructure and aggregating hash power to mine Bitcoin. Just like commodities, if the asset is desirable and is believed to appreciate in value, market participants will be incentivized to “mine” or accumulate the asset.

Small miners who are less capitalized are more likely to sell at less ideal times like this. These miners likely don’t have enough net cash on hand to continue mining operations without selling their previously mined BTC. Conversely, larger miners, which are well-capitalized, have the ability to hold their mined BTC and wait for higher prices to sell.

In the chart below, onchain analyst Wu Blockchain detected a near-term increase in “average” number of BTC transferred by miners to exchanges. Throughout 2021, this metric registered smaller peaks with an average of 60 BTC. On July 17th, the average increased to 98.6171 BTC, signaling caution.

Although this miner activity appears to be a signal of caution, it is important to look at what happened to BTC prices during similar occurrences. For example, in Q4 2020, this metric saw multiple spikes, peaking at over an average of 120 BTC. BTC broke out to new all-time highs, soaring to $40k by January 2021. 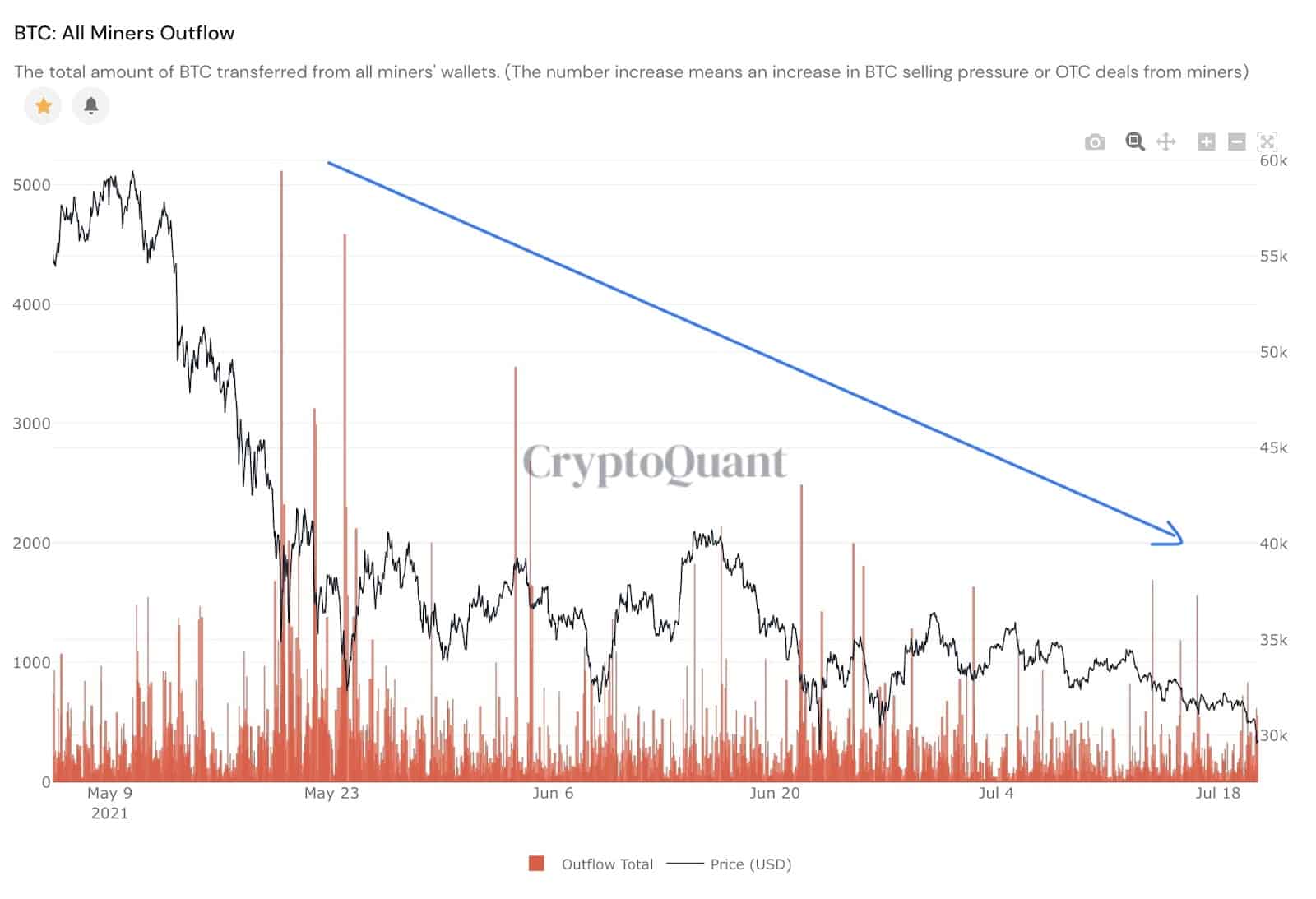 This suggests larger, and well-capitalized miners refuse to sell at current prices and are holding BTC in anticipation of higher prices in the future. This could explain the increase in miner net position change on Glassnode. 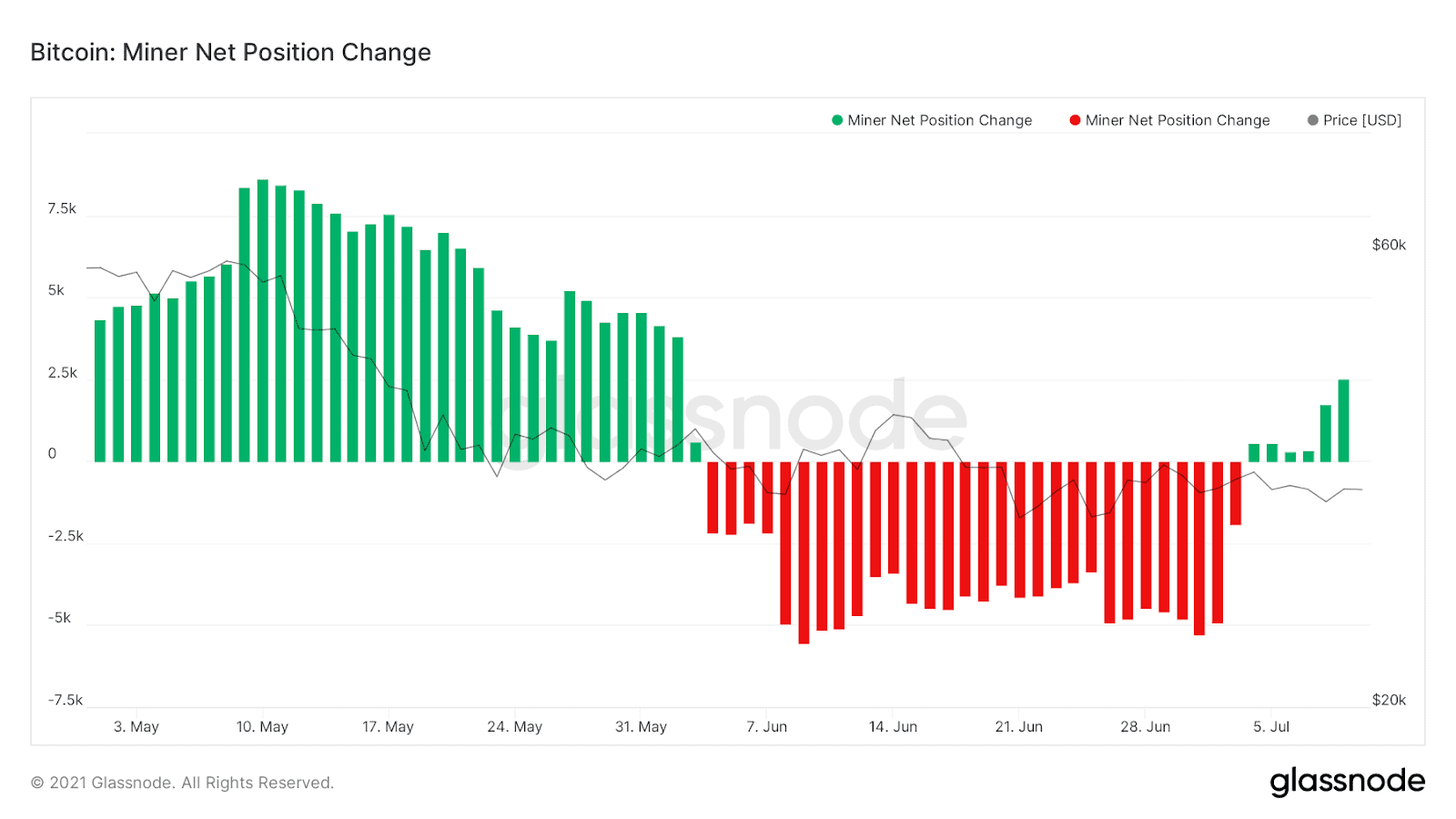 Given the financial stress on smaller miners, they are most likely the ones selling BTC through the consolidation and are at risk of being wiped out if BTC closes below $30k.

At the moment, BTC is at an intraday low below $30k with very low volume, an indication that long-term holders and larger miners are not selling. 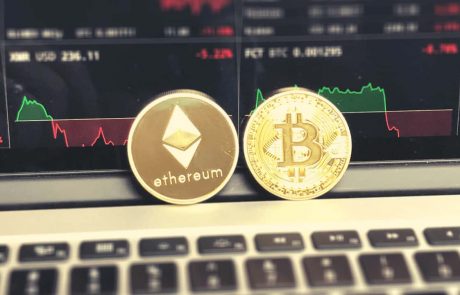