Following the positive weekend in terms of trading action, bitcoin has retraced by a few thousand dollars to just above $34,000. Most altcoins have also failed to continue upwards as ETH has dipped below $2,300, and BNB is close to breaking beneath $300.

Bitcoin proved most assumptions wrong in the past few days. There were concerns that history is to repeat itself and the asset could lose traction during the weekend as it did in the past several ones.

However, that was not the case, and the cryptocurrency actually added about $3,000 of value in just a few days. As a result, it pumped to a daily high of just shy of $36,000 (on Bitstamp).

At that point, though, the bears intercepted the move and reversed the trajectory. In a matter of hours, BTC lost about $2,000 and fell to $34,000.

It’s worth noting that the trading volume has massively declined in the past few days. Data from Bitcoinity shows that some of the largest cryptocurrency exchanges have seen the volume dumping to multi-month lows, as the graph below demonstrates.

Altcoins See Nothing but Red

The alternative coins also reached new highs during the weekend, but most have mimicked BTC’s retracement. Ethereum, for example, spiked to a two-week high of well over $2,300. Nevertheless, a 3% decline has driven the second-largest crypto to below that particular level.

Binance Coin went as high as $315, but it has lost some ground and is currently close to breaking below $300.

Apart from Synthetix and The Graph, which have painted double-digit gains once more, most of the lower-caps have also retraced.

The cumulative market capitalization of all cryptocurrency assets is down by $70 billion in a day, but it’s still over $1.4 trillion. 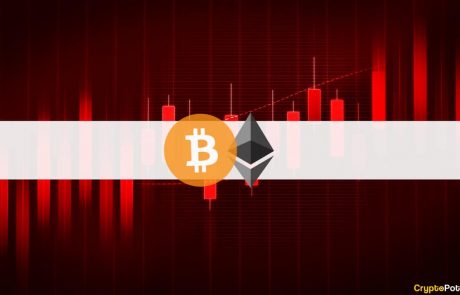 Bitcoin Price Down to a Two-Week Low as Ethereum Slipped to $2,400 (Market Watch)