Bitcoin whales, in this context, are those big investors and institutions holding between 100 to 10,000 bitcoins in a single address. According to Santiment, these addresses currently hold a combined 9.12M bitcoins – 100K more than compared to one and a half months ago.

Many retail investors have been panicking due to bitcoin losing more than 50% of its value since mid-April. However, BTC whales saw the downturn as a buying opportunity and have continued to accumulate the crypto asset over the last three months.

Addresses holding at least 10,000 BTC bought nearly 90,000 BTC in less than a month. These “uber large” addresses as Santiment described them were holding half of all the bitcoin in circulation at the time.

Even with the Elon Musk-induced volatility and China FUD, Bitcoin whales continued their accumulation phase and added approximately $3.6 billion worth of bitcoins to their portfolios over the last six weeks.

Will July Be Profitable For Bitcoin?

Whales’ actions usually have an immediate effect on the market. As expected, the recent 60,000 BTC purchase by whales saw bitcoin register more than 5% gains. This resulted in an increase above $35,000 yesterday, before today’s decrease.

While many are worried about the recent decline in bitcoin’s hash rate and the negative difficulty adjustment, July started off well for the cryptocurrency.

Although history sometimes fails to repeat itself, July is historically a profitable month for bitcoin as the asset has recorded more gains (seven) than losses (three) in the 7th month for the last 10 years. Bitcoin’s biggest loss in July was happened in 2011 and 2019, when the coin closed the month with a 19.7% loss while its biggest gain was in 2012 with a 36.5% profit. 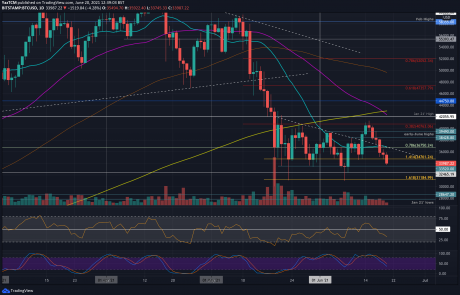