Bitcoin and cryptocurrency prices have lurched back and forth over the last month with bitcoin now down around 50% from its April peak.

The bitcoin price rout was sparked by China's latest crackdown on bitcoin and crypto miners—who use high-powered computers to secure cryptocurrency blockchains and validate transactions in return for freshly created tokens.

"I think, given the bitcoin growth rate, this will prove to be a trillion-dollar mistake for China," said Saylor, speaking on Bloomberg TV, and pointing to China's "50% bitcoin market share" and bitcoin growing "100% year-over-year."

"It's a tragedy for Chinese miners [and] it's a geopolitical mistake for China the country—but I suppose they could afford to make a trillion-dollar mistake."

The bitcoin price has been hit over recent weeks by China’s latest bitcoin and crypto crackdown, which, along with Elon Musk's concerns over bitcoin's energy use, has wiped over $1 trillion from the combined cryptocurrency market.

Until recently, China is thought to have contributed over 50% to bitcoin's mining capacity, however, authorities in the country last month began ordering bitcoin and cryptocurrency miners to shut down their operations. According to state-backed newspaper The Global Times, 90% of bitcoin mines in China's Sichuan province were shuttered last weekend, sending the bitcoin price sharply lower.

"It's a nuisance and a dislocation for bitcoin in the near term, you can see the trading volatility," said Saylor. "A lot of Chinese had to sell bitcoin under forced liquidations and with a timeframe because they had to get out of the country and all their loans got pulled—so that's been a big opportunity for Western investors."

The U.S. has emerged as one of the primary destinations for bitcoin miners fleeing China. Last week, Miami mayor Francis Suarez said he's working to lower the cost of electricity in order to entice bitcoin miners to make the move to Florida.

"It's a great windfall for North American bitcoin miners whose costs are the same and they're going to generate 50% or 75% more revenue for a while because the China business has been taken offline," said Saylor.

On Monday, Microstrategy revealed it now owns more than 100,000 bitcoins after completing yet another bitcoin purchase, this time spending just under $500 million on some 13,000 coins—though Saylor said he'd have been willing to pay a lot more.

"Companies like mine bought bitcoin in the $30,000 range, we'd have paid double or even triple if it hadn't been for the China exodus, so we got a benefit from that." 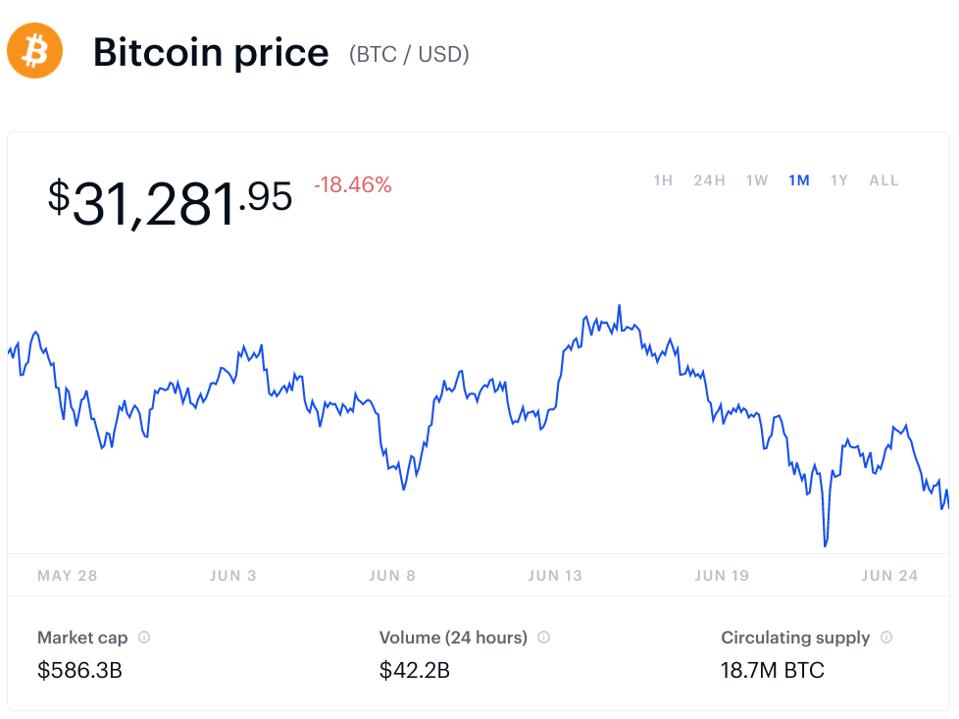 "The new class of regulators are progressive and more enlightened on bitcoin," said Saylor, pointing to a number of Wall Street banks that have recently rolled out bitcoin-related products and the much-hyped Nasdaq debut of San Francisco-based bitcoin and crypto exchange Coinbase—which happened to be the top of the early 2021 bitcoin bull run.

While Microstrategy's stock price has gone into freefall in recent months, Saylor says he'd rather be "winning with something different, than sitting at $60 per share with no hope."

Microstrategy’s stock has soared since it first announced it had bought bitcoin in August last year, with its shares up around 400%. Its stock peaked in February but has since halved.

"You've just got to be patient and look at the long-term technology trend," Saylor added. "If you believe in [big tech], then the next logical thing to get dematerialized is property on 5 billion mobile phones."