Technological adoption is never a linear progression, but in producing the Forbes Blockchain 50 for the third consecutive year we are starting to identify some interesting trends and tell-tale signs of the development of the technology made popular by bitcoin. For example, we’ve never had a more geographically-dispersed set of list members, or such a high number of companies provide services built around bitcoin specifically. Additionally, there are some fascinating lessons to be learned from the handful of companies that made the list every single year, as well as some of the massive global conglomerates that earned entry for the first time in 2021.

As a brief reminder, to be eligible a company must have at least $1 billion in revenues or be valued at $1 billion or more.

Here are the key trends and findings from this year’s Blockchain 50.

There have been 96 members of the Forbes Blockchain 50 list since it was created in 2019. Of those companies, only 12 have been included all three years. To achieve such a feat, these companies each had to be early adopters of blockchain, commit substantial resources to their respective initiatives and demonstrate growth through the years. Making this year’s list is probably the hardest part of completing the trifecta given the record-number of quality submissions received by Forbes, and the fact that household names such as Amazon, Citi, Google, Facebook and Mastercard were among the 14 two-time members who dropped off this year.

In exploring the list a few thoughts immediately jump to mind. First, crypto-giant Coinbase is the only crypto-native firm to earn this distinction (six such companies have made the list at least one year). Second, many of these members not only explored blockchain use cases, but took the extra step of building their own platforms and launchpads (Ant Group, IBM, Microsoft, Samsung, and VMWare, for example). Finally, this list validates supply-chain management—one of the most-promising and earliest-identified use cases—as Cargill and Walmart have not only used this technology to improve their own processes, but leveraged their clout to bring supply chain partners into their blockchain orbit.

However, 2021, for the first time ever, saw half of the members coming from outside of the U.S. What’s more, only 13 members are from Europe, which means that a record 12 members are from Africa, Asia, the Middle East and Latin America. Of particular note, Forbes included its first member from Africa (South Africa-based pulp producer Sappi), India (Tech Mahindra) and the Middle East (oil giant Saudi Aramco). 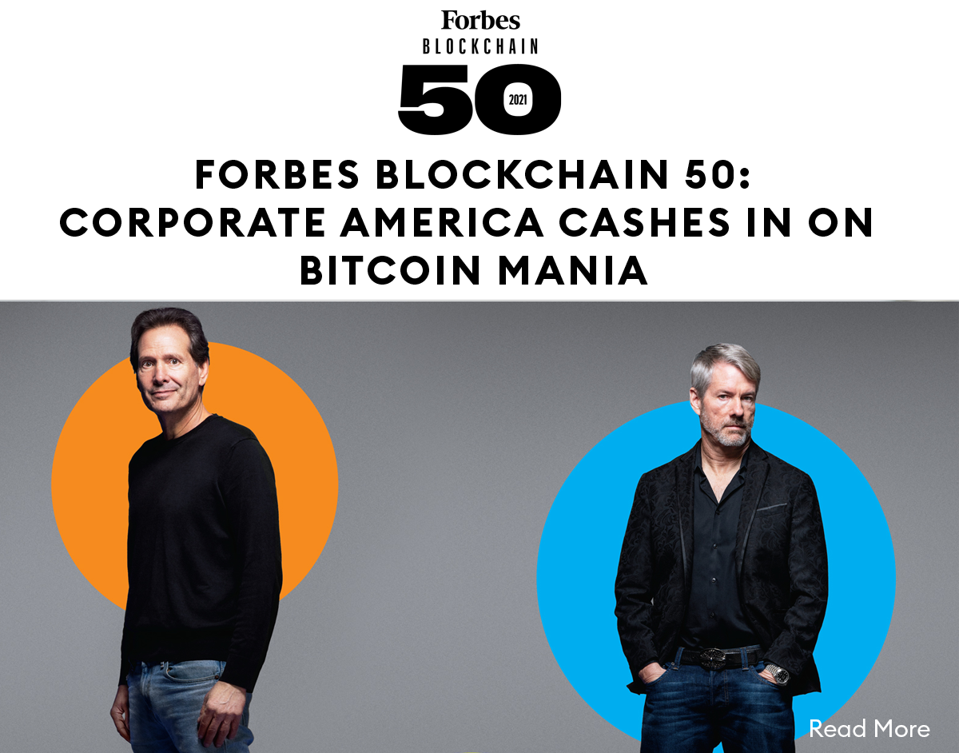 China also had seven members this year, including ubiquitous technology platforms such as the payments giant Ant Group, search giant Baidu, and two of its leading banks, China Construction Bank and ICBC. This level of involvement from Chinese governments may appear contradictory to some observers who have followed efforts by Beijing to restrict use of cryptocurrencies in the country. However, the government is a major advocate of blockchain technology and is in the latter stages of developing its own sovereign digital currency. 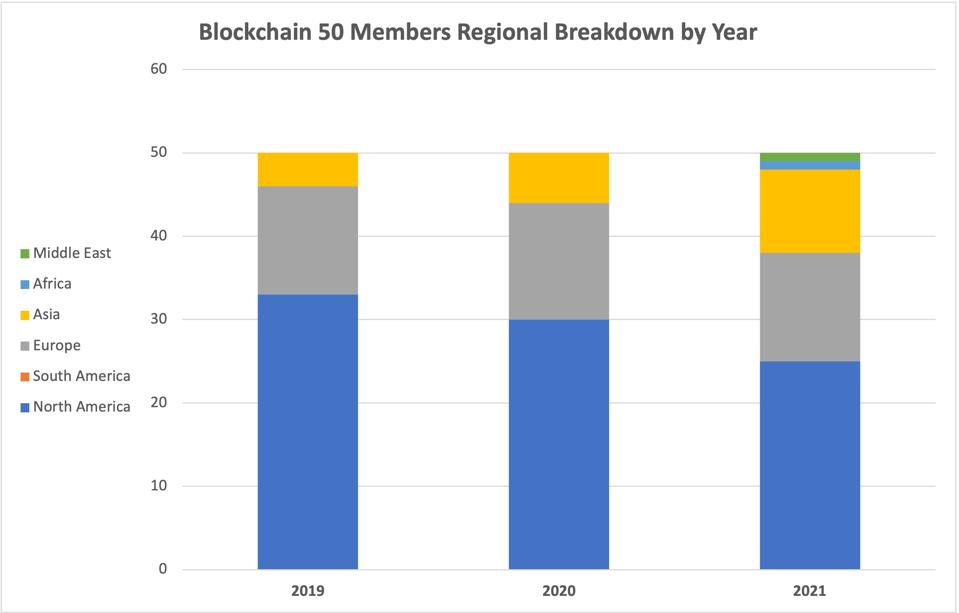 This year’s list was the first to be released during a crypto bull-market. The 2019 list was revealed when bitcoin was approximately $5,000, and it was just under $10,000 for the 2020 list. Today bitcoin is comfortably above $30,000, and perhaps more importantly has spent almost six weeks above $20,000 (which reflects the surge’s staying power). Much of this price appreciation, which started almost immediately after the broad market selloff on March 12, 2020, can be attributed to accelerated institutional investment. Perhaps it is for that reason that a record nine companies made the list this year due to their specific involvement with bitcoin.

Headliners include business analytics firm MicroStrategy, whose $1 billion allocation kickstarted bitcoin’s exponential growth in late 2020, as well as electronic payment company Square, which generated $1.6 billion in revenue from bitcoin last quarter and bought $50 million worth of bitcoin in its own right to put on its balance sheet. Additionally, CME Group briefly became the largest bitcoin derivatives exchange in the world (based on futures open interest) and remains a bellwether for institutional involvement in the space. Aside from also making bitcoin its primary treasury reserve asset, first-time member NYDIG operates a professional-grad custodial service for bitcoin, and finally crypto-friendly Signature Bank operates a proprietary blockchain-based system for institutional clients to fund their crypto trading accounts. Last year its total deposits from crypto customers increased by 400% to top $10 billion. 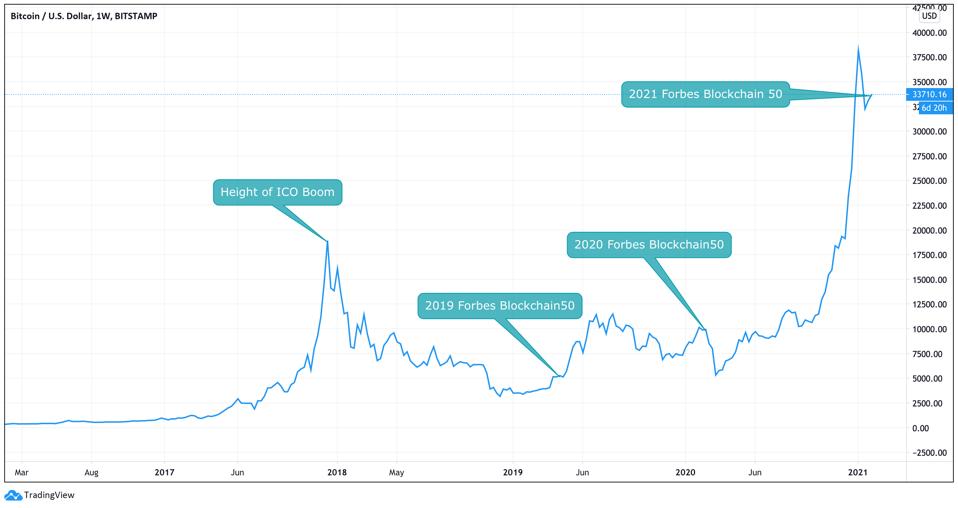 Another sign of blockchain’s growing utility is the level of involvement from fast-followers. These are institutions that may not be early-adopters, perhaps due to concerns about the technology’s value proposition or questions about how it can be relevant to their business. This year’s list includes several first-time members that are true global conglomerates and leaders in their respective fields. For instance, BHP Billiton, the largest mining company in the world, is using blockchain to digitize multiple operations, such as tracking ESG goals and validating supplier identities. Saudi Aramco has turned to blockchain to help manage its production equipment and track its cargo. ICBC, the globe’s biggest bank, is using this new technology across multiple applications. Finally, in the U.S., the National Basketball Association is using blockchain to produce and sell a novel form of digital trading card, and CONA (owned by Coca-Cola’s 12 largest North-American bottlers) is turning to blockchain to help manage interactions up and down its supply chain.

This year’s list included a lot of milestones and firsts, but one constant continues to be the concentration of activity among participants in a few key industries. For instance, for the third year in a row, the finance industry has had the highest number of members. This is unsurprising given the technology’s roots in finance. Despite the fact that some of these firms are squarely in the crosshairs of blockchain startups, many are also the first to appreciate its potential, understand its value proposition, and put it to work. Manufacturing also remains an industry of focus, as blockchain can directly address acute challenges in supply chain management and data transfers between multiple parties. Finally, one interesting observation is the reduction of the number of software companies that made the list. In 2019, 16 companies were included. However, in both 2020 and 2021 that number dropped to seven. This result signifies that industry focus is shifting from companies developing the tools to the users. Industries that filled in the gap voided by the reduction in software companies include social media/internet platforms and mining firms. 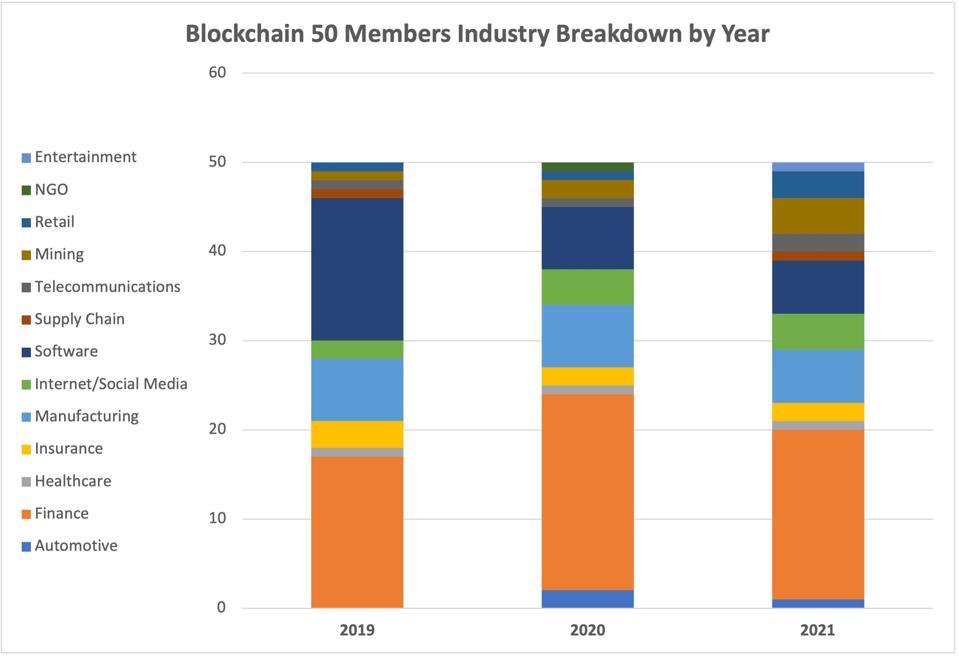