Germany’s blockchain initiative: How adoption became a reality in 2020 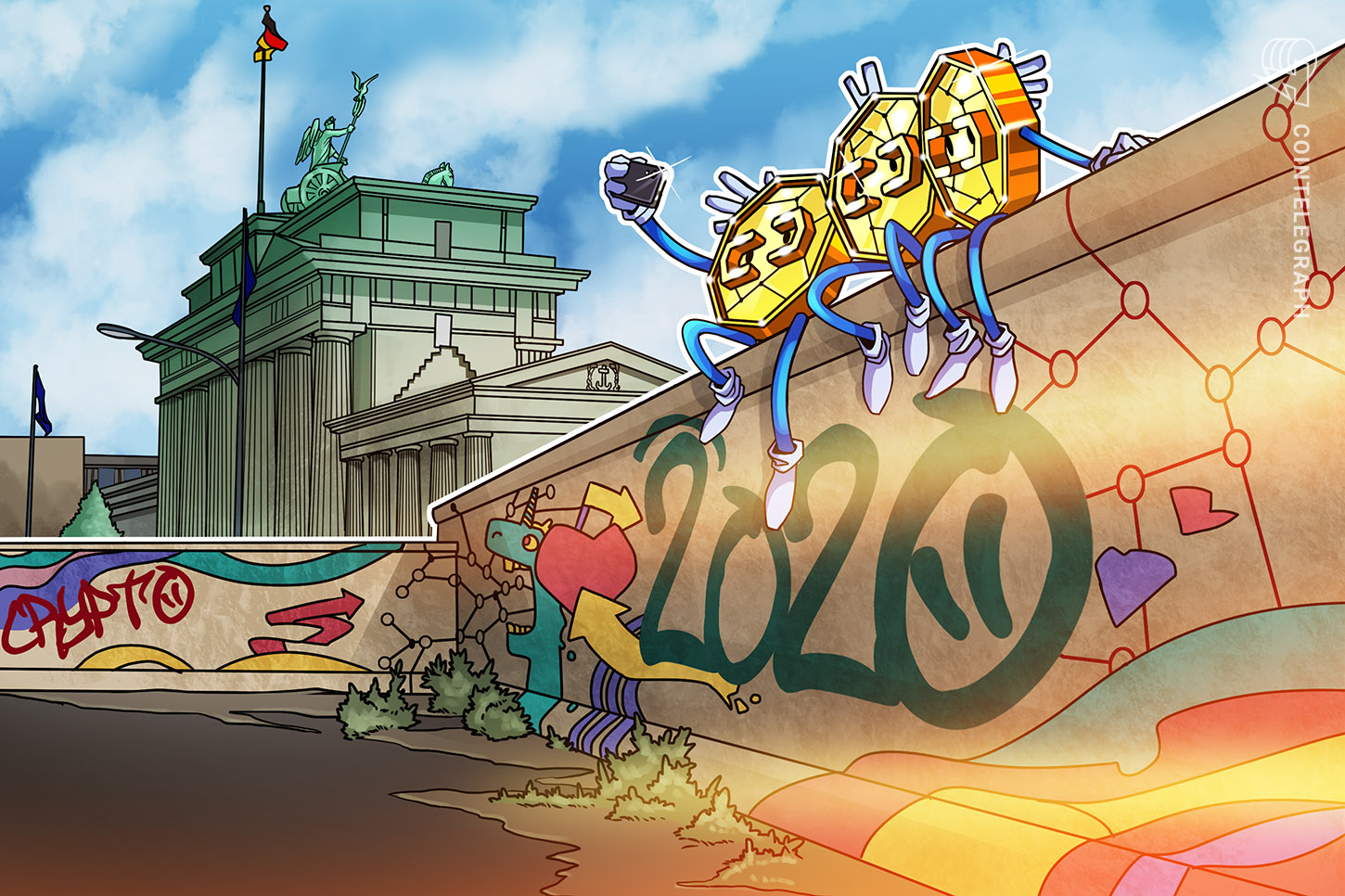 Germany has a very diverse, active blockchain ecosystem of companies and enthusiasts, especially in the city of Berlin. And an important step in the development of this ecosystem has been taken by the federal government itself, which tries to preserve and promote the vibrant blockchain ecosystem to continue its growth and make Germany an attractive opportunity for investment in this field.

To further this goal, the German government adopted a national blockchain strategy back in September 2019 to support its commitment to the use of the technology. The 44 individual measures contained therein are to be realized by the end of 2021 by a total of 10 federal ministries. Exactly one year later, in September 2020, 17 measures were already very far advanced, 20 were still in progress and nothing had happened yet with seven measures — according to an evaluation published by Bitkom, Germany’s federal association for information technology.

Germany’s implementation of this blockchain strategy during 2020, in addition its implementation of the European Union’s 4th Anti-Money Laundering Directive, has had far-reaching consequences for blockchain startups, fintech firms, banks, crypto exchanges and industrial companies. As of Jan. 1, 2020, the custody of crypto assets — and thus, also their trading — requires a license from the nation’s Federal Financial Supervisory Authority, known as BaFin. This license applies to all companies that hold or trade crypto assets such as Bitcoin (BTC) and Ether (ETH), from crypto custody providers to crypto exchanges. Thus, from 2020 onward, the handling of crypto assets in Germany is subject to high regulatory requirements and standards that have already been in place for decades in traditional capital markets.

One of the most important regulatory measures in 2020 was the law on the issuance of electronic securities, which was passed by the Federal Cabinet in December. According to this law, securities can also be issued purely electronically in Germany in the future.

Another important step in the direction of regulation was when the European Commission presented legislative proposals on crypto securities in September 2020. Its Regulation on Markets in Crypto Assets, known as MiCA, is expected to come into force in 2022 and create legal clarity and certainty for issuers and providers of crypto assets throughout the European Union.

Currently — and until the MiCA regulation is made effective — companies often have to adapt their international business model for each EU member state individually, which can lead to high costs. A uniform, pan-European regulation such as the MiCA regulation can reduce complexity and uncertainty for crypto service providers and improves conditions for market participants.

Such extensive regulation can be a major challenge for startups, but it also offers opportunities in terms of professionalizing the entire crypto ecosystem. Those who believe that regulation is a kind of “stop sign” for cryptocurrencies, stablecoins and crypto exchanges are mistaken. Instead, the regulatory structure in Germany is designed to place crypto assets on an equal footing with existing financial products. Unprofessional startups and dubious providers could be pushed out of the German market as a result. Well-positioned startups could find solutions and continue to develop.

The rise of financial services in the crypto sector

Above all, the new rules make it easier to invest in crypto assets, which led to a boom year for financial services. Several companies and banks built the relevant technological infrastructure for professional trading in Bitcoin and other crypto assets.

This led to increased, more varied offerings around digital assets in 2020. Financial services in the crypto segment include, for example, instruments that track Bitcoin’s price or marketplaces for retail investors. Now, fully regulated trading venues for professional investors are emerging, such as Boerse Stuttgart Digital Exchange and Bankhaus Scheich. Some banks are also establishing themselves as back-end-as-a-service platforms. Solarisbank and Bankhaus von der Heydt, for example, provide other financial institutions with the regulatory and technological infrastructure to enable their clients to access crypto assets.

Ten31 Bank, a subsidiary of the fully regulated German WEG Bank, has been working on payments processing between digital currencies and the euro since May 2020.

At the end of 2020, the bank Hauck & Aufhauser also launched its service as a custodian for crypto assets and digital assets.

Some fintech projects such as Bison and the startup Bitwala are aimed at private investors and enable trading in cryptocurrencies around the clock.

All of these companies offer a good entry point for professional and private investors who may want to invest in Bitcoin and other crypto assets. With a solid regulatory foundation and more players, we can expect 2021 to be an interesting year for the young crypto industry.

Little acceptance among the population and investors still

Although the current regulation ensures more legal certainty, a diverse range of offers is emerging on the part of financial service providers, and because Bitcoin’s price changes rapidly, still too few Germans are interested in the cryptocurrency. According to a survey conducted by Bitkom in December 2020, only 2% of Germans over the age of 16 have invested in Bitcoin or other cryptocurrencies. However, almost one-fifth of respondents (18%) can imagine making such an investment in the future.

Not only private investors but also investment specialists are cautious when it comes to cryptocurrencies. Security concerns, a lack of control by central banks and high volatility are the main reasons why professional investors in Germany tend to be skeptical. This is the conclusion of the DVFA, an association of investment professionals in Germany, which surveyed 1,400 members in October 2020.

Apparently, there are major differences in the acceptance of digital assets between generations: Young Germans are more open to cryptocurrencies. It is precisely this target group that still provides huge potential for the German crypto market. The growing regulation and professionalization of the local crypto scene as well as the support of large companies such as PayPal and both central and commercial banks worldwide will also drive the acceptance of cryptocurrencies among German investors and the rest of the population.

Blockchain startups in Germany span a spectrum of use cases and fields. However, the majority of startups are focused on the financial sector (those have already been mentioned above), followed by industries such as entertainment, digital identity, the Internet of Things and energy.

The energy sector was of particular interest within the German blockchain ecosystem in 2020. There, the practical research and development of blockchain technology was driven forward, including with a dedicated pilot lab called the “Future Energy Lab.” The use cases range from blockchain-based virtual large-scale storage for the operators of photovoltaic systems, such as the Smart Service World II project, to energy trading via blockchain technology.

The website for the Future Energy Lab — which is operated by the German Energy Agency, known as Dena — was launched at the end of August 2020. The project is a virtual umbrella for all energy projects that are a part of the blockchain strategy and serves as a point of contact and information and networking center. Startups and corporations can actively participate in the lab and its various pilot projects by becoming members.

Another area of national importance in 2020 and 2021 is digital identity. So-called self-sovereign identities, or decentralized identities based on the blockchain, promise an alternative that brings users control over their data and the data economy in the digital age. Numerous German companies, such as Spherity, and initiatives such as Lissi are actively working on the concept. The German government is also funding individual pilot initiatives as part of its “Digital Identities Showcase” project, which is one of many measures in the national blockchain strategy.

Education and networking, even in the times of COVID-19

However, it’s not only the government that is active — the local blockchain community is also paving the way for development in Germany. The community consists of experts and enthusiasts as well as associations, such as Blockchain Bundesverband, the European Blockchain Association and BerChain. All of them aim to promote blockchain solutions and projects in an organized, systematic way.

The German blockchain community is big and consists of about 150,000 participants. There are more than 180 blockchain startups that were either founded in Germany or have a branch there, with most based in Berlin.

Together with the German government, the community promotes application-oriented research in the field of blockchain. This includes work carried out among the scientific community, such as the international Bloxberg initiative led by the Max Planck Society, and done in collaboration with the private sector, such as the Fraunhofer Blockchain Lab. The Frankfurt School of Finance & Management has a Blockchain Center where academic training is offered. This is one of the most important research centers in Germany. In addition to education and research, the Blockchain Center offers a platform for managers, startups, and technology and industry experts to exchange knowledge and best practices.

A master’s degree in the field of blockchain can be obtained through the Blockchain Competence Center, or BCCM, of the Mittweida University of Applied Sciences. Moreover, the BCCM regularly offers blockchain-focused courses.

In addition to academic training, the community also organizes conferences, hackathons and meetups — both offline and online — such as Blockchain Week Berlin, the Crypto Assets Conference held in Frankfurt and organized by the Frankfurt School Blockchain Center, and diverse online meetups advertised on Eventbrite — for example, by Disrupt Network and CryptoMonday.

Good opportunity for Germany to be a blockchain hotspot

To sum it all up, the current crypto-friendly policies, extensive regulation and slow but ever-increasing acceptance of blockchain technology and cryptocurrencies can make Germany one of the most important blockchain hotspots in Europe and even worldwide.

In 2021, the German startup ecosystem will especially benefit from the current blockchain strategy, as it aims to foster innovation, spread blockchain knowledge and contribute to the country’s goal of becoming a global leader in the blockchain field. Toward this goal, several government-funded projects were implemented in 2020, such as a blockchain-based energy database to track electricity consumption, an education certificate verification system and a smart contract registry with Dena. And the most important initiative in the country was a nationwide digital identity system with a focus on keeping personal data secure and ensuring data integrity.

2021 will be exciting: New blockchain projects from the government and large companies are planned and more reliable financial service providers and banks will get their crypto license from Bafin and, thus, have access to the German crypto market. As a result, more Germans, especially small and large investors, will finally take the crypto market seriously.