Over the past week, several traders bought Dogecoin (DOGE) leading up to Elon Musk’s Saturday Night Live appearance as they expected a pump. However, the mention of Dogecoin during the monologue by Musk did not produce the rally traders were looking for and professional traders may have dumped their positions on novice traders who were expecting a breakout.

Dogecoin dumped to an intraday low at $0.41 today, losing over 34% from the previous day’s close. Since then, the meme coin has been trying to stage a recovery and has risen to $0.54. The sharp fall in Dogecoin price shows that buying the hype, without any major fundamental reason, could result in stomach-churning volatility.

On the other hand, Ether (ETH) extended its up-move further, faltering just below $4,000, while Bitcoin (BTC) again fell short of the $60,000 mark, indicating strong selling on every minor rally. A few days of range-bound action in Bitcoin is a positive sign as it may set the stage for the next leg of the uptrend.

With Ether leading the altcoin charge, let’s look at the top-5 cryptocurrencies that may outperform in the short term.

Bitcoin broke above the downtrend line on May 8 but the bulls are finding it difficult to clear the hurdle at $58,966.53. The immediate support on the downside is at the moving averages. If the price rebounds off the 20-day exponential moving average ($56,387), the bulls will make one more attempt to push the price above $58,966.53. 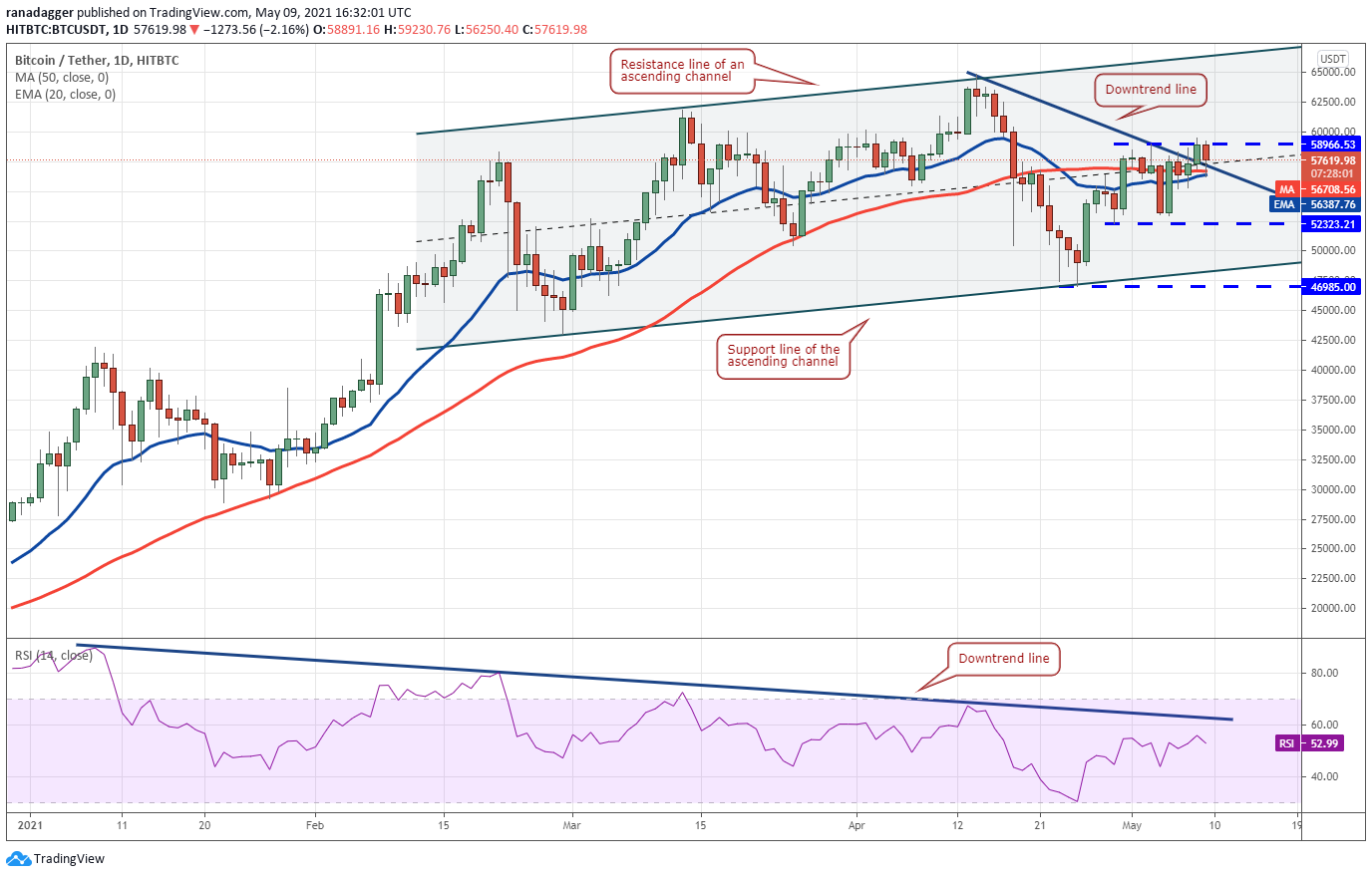 If they succeed, the BTC/USDT pair could start its journey toward the resistance line of the ascending channel at $67,000. The price has turned down from the resistance line on two previous occasions, hence the bears will again try to defend this level. The momentum will pick up after the buyers push the price above the channel.

However, the flattish moving averages and the relative strength index close to the midpoint show a lack of bullish momentum. If the bears pull the price below the 20-day EMA, the pair could drop to $52,323.21.

On the other contrary, a break below $52,323.21 may open the doors for a fall to the support line of the ascending channel and then to $46,985 where buyers may step in to arrest the decline. 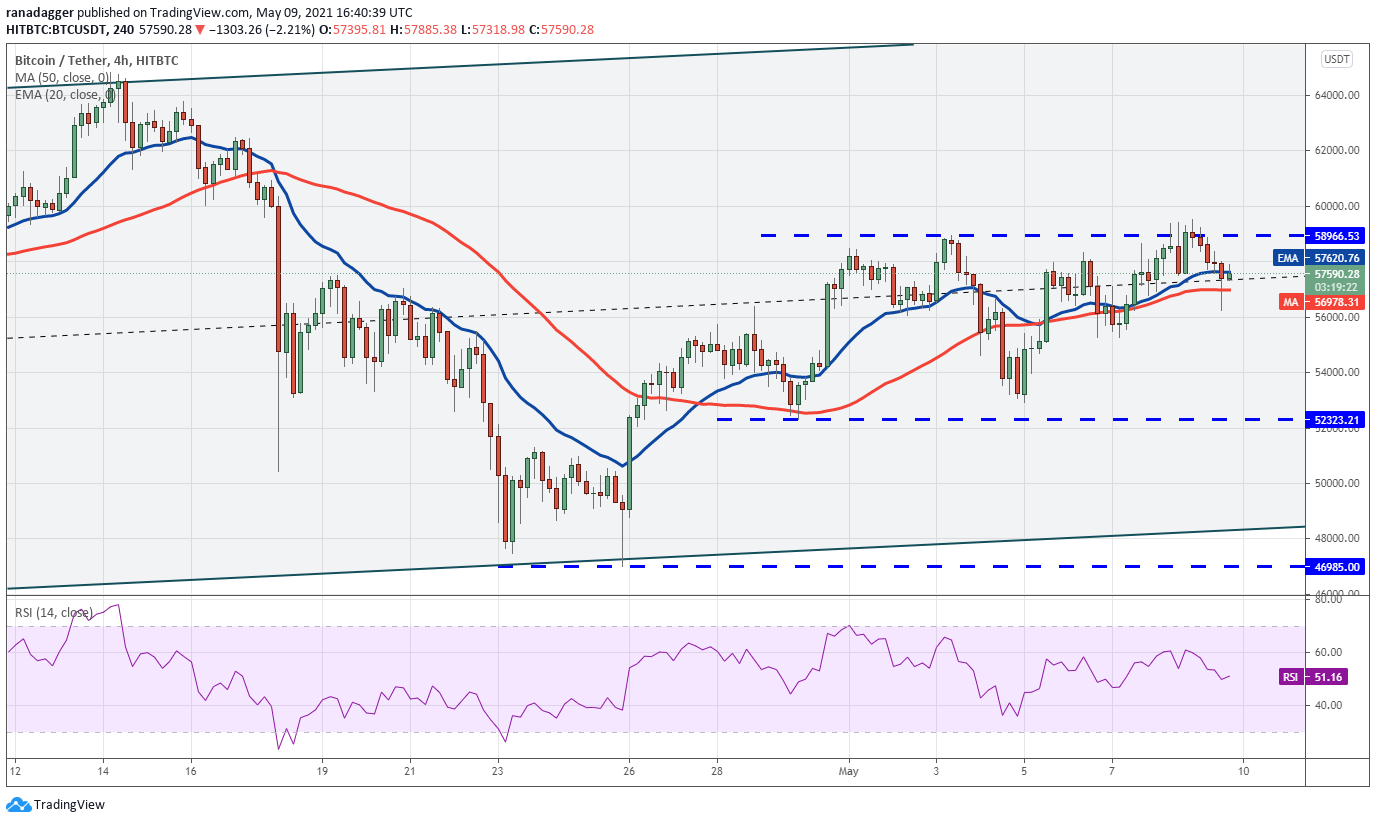 The flattish moving averages and the RSI near the midpoint suggest a balance between supply and demand. However, if the price rebounds off the current level and rises above $58,966.53, the pair could pick up momentum and rally toward the target objective at $65,012.18.

Binance Coin (BNB) is in a strong uptrend and the moving averages indicate the path of least resistance is to the upside. Although the negative divergence on the RSI is flashing a warning sign, the setup will not come into play until the price retreats and shows weakness. 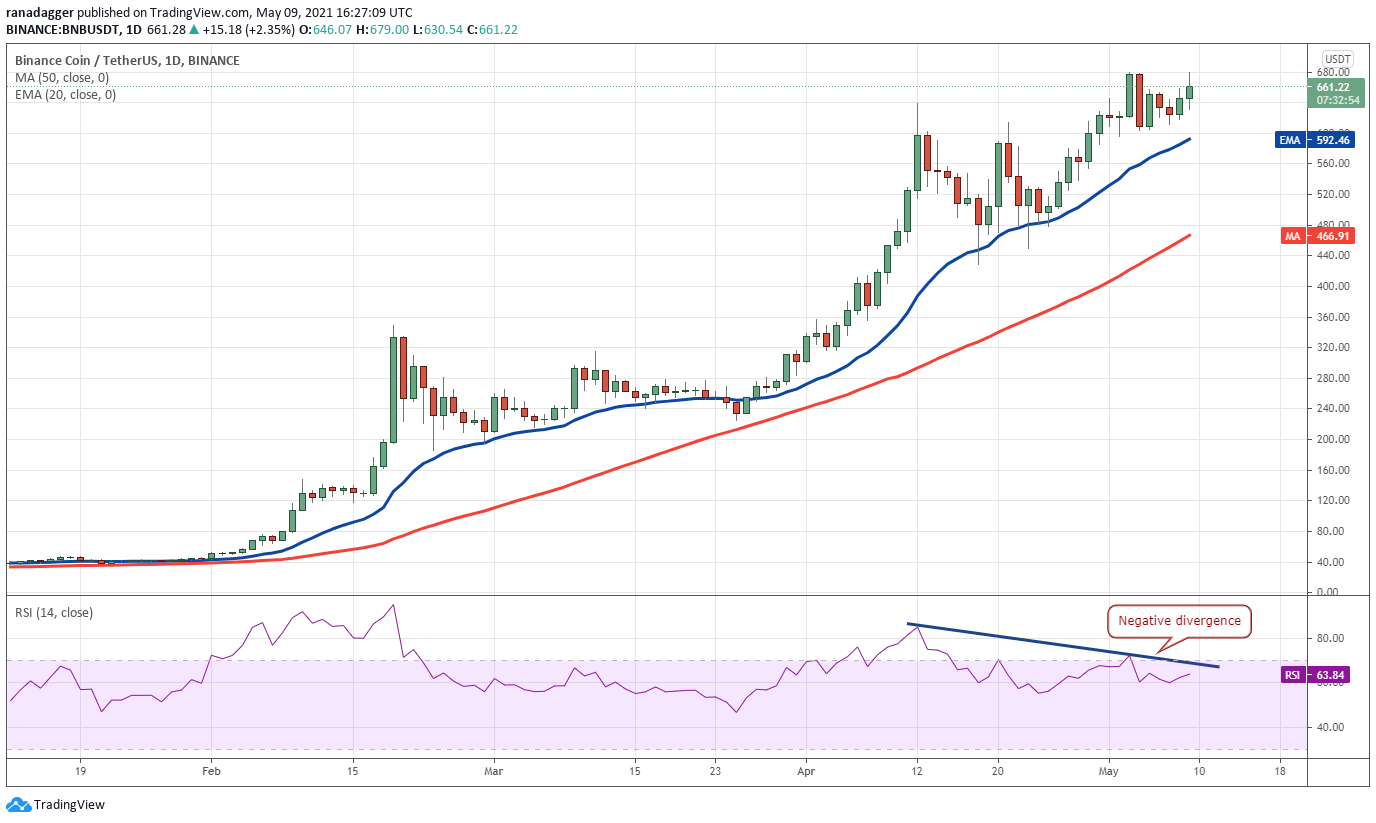 If the bulls thrust the price above $680, the BNB/USDT pair may start the next leg of the uptrend that could reach $808.57. This positive view will invalidate if the pair turns down and breaks below the 20-day EMA ($592).

If that happens, the short-term traders may dump their positions, resulting in a decline to the 50-day SMA ($466). This is an important support to watch out for because the price has not closed below the 50-day SMA since Dec. 13, 2020. A break below $428 may signal that a top is in place. 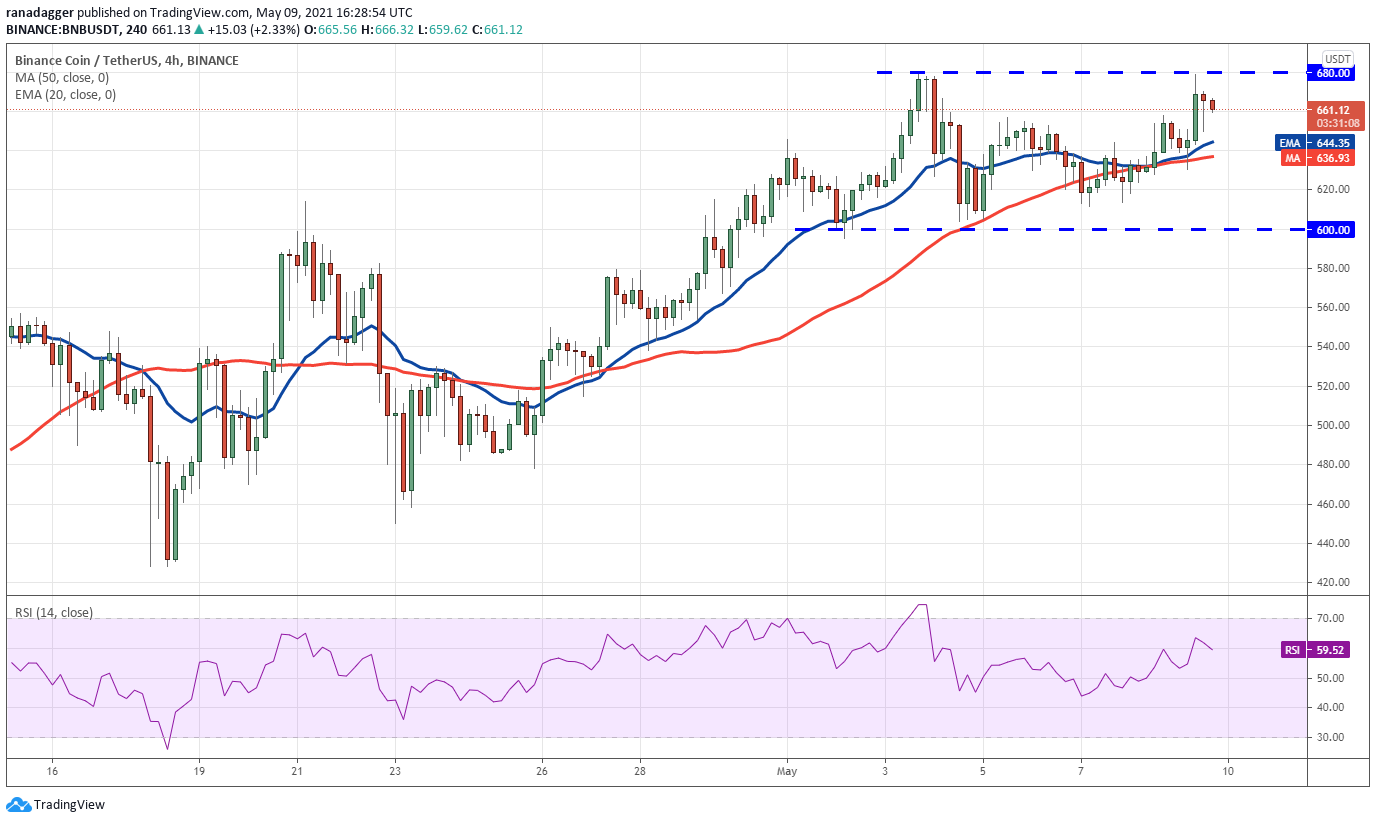 The 4-hour chart shows the pair is stuck between $600 and $680. The 20-EMA has started to turn up and the RSI is in the positive territory, indicating the bulls have the upper hand. If the bulls can push and close the price above $680, the pair may rally to $760.

Alternatively, if the price turns down from the current level and slips below the moving averages, the pair may correct to $600. A bounce off this level could extend the consolidation for a few more days.

Cardano (ADA) had been stuck between the $1 to $1.48 range for the past many weeks, before breaking out on May 6. This suggests the equilibrium between the bulls and the bears resolved in favor of the buyers. 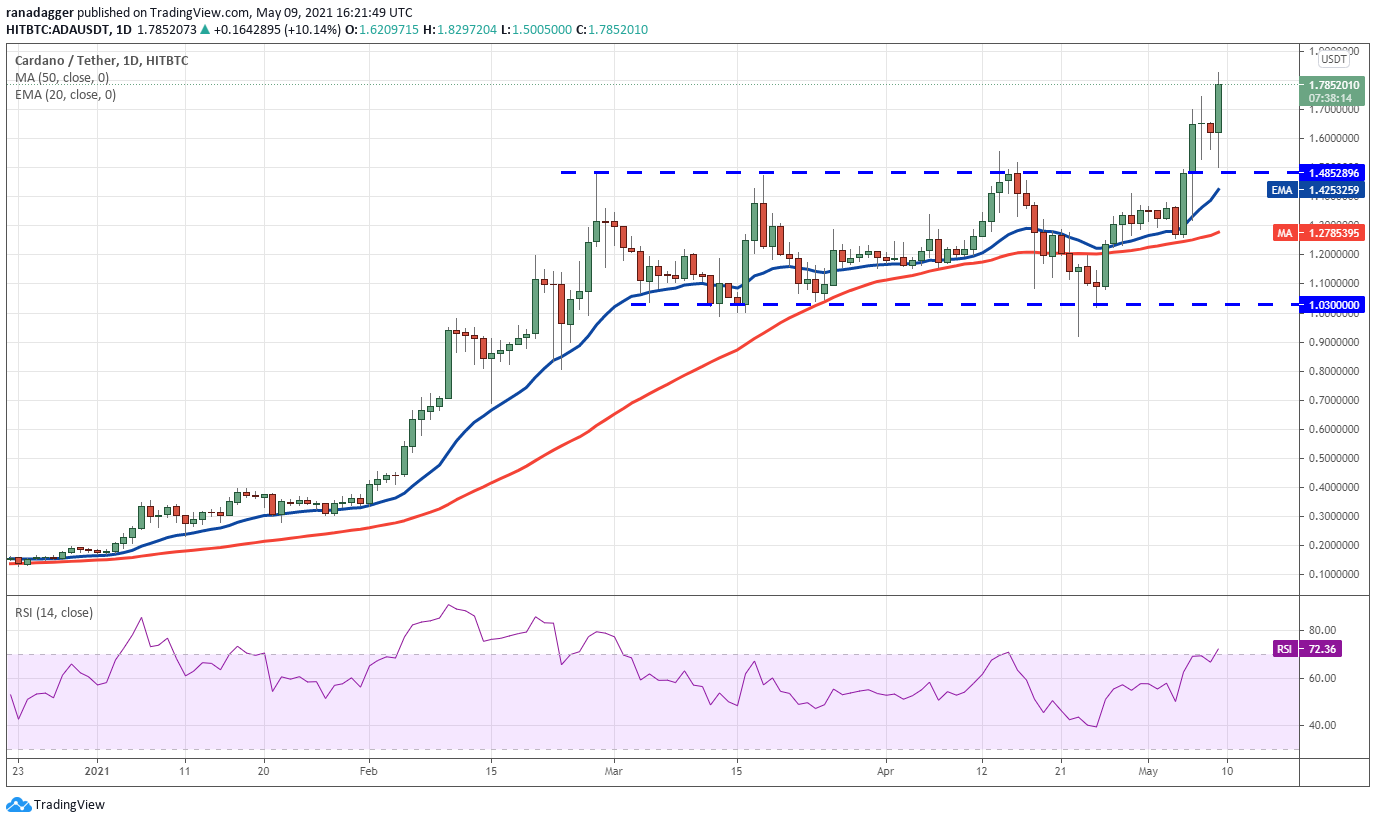 That does not mean the bears have given up yet. They attempted to pull the price back below $1.48 on May 7 and today. However, the long tail on the day’s candlestick suggests the bulls have successfully flipped $1.48 into support.

If the buyers sustain the price above $1.74, the ADA/USDT pair could rally to $2 and then $2.25. This bullish view will nullify if the price turns down and slips below the 20-day EMA ($1.42). Such a move could trap the aggressive bulls, resulting in a drop to $1. A rebound off this level could keep the pair range-bound for a few more days. 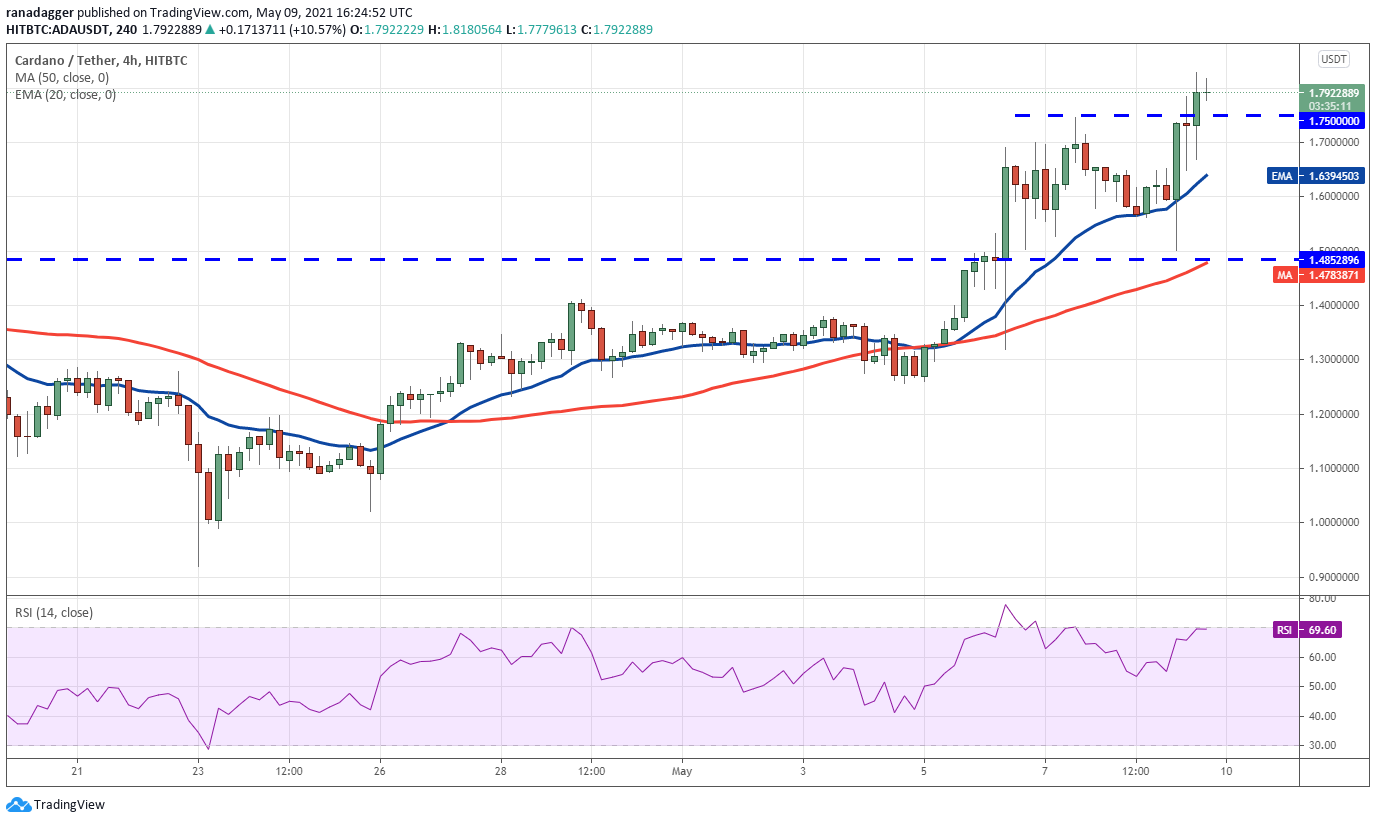 The moving averages on the 4-hour chart are sloping up and the RSI is in the positive territory, indicating the bulls are in control. If the buyers sustain the price above $1.75, the momentum may pick up.

Conversely, if the price turns down from the current level, the pair may drop to the 20-EMA and then to the $1.48 support. A bounce off this support could result in a tight range trading between $1.48 and $1.75. The short-term bullish sentiment may nullify if the bears sink the price below the 50-SMA.

Litecoin (LTC) has been trading inside an ascending broadening wedge pattern. Although the bears have been defending the resistance line of the wedge for the past few days, the positive sign is that the bulls have not given up much ground. 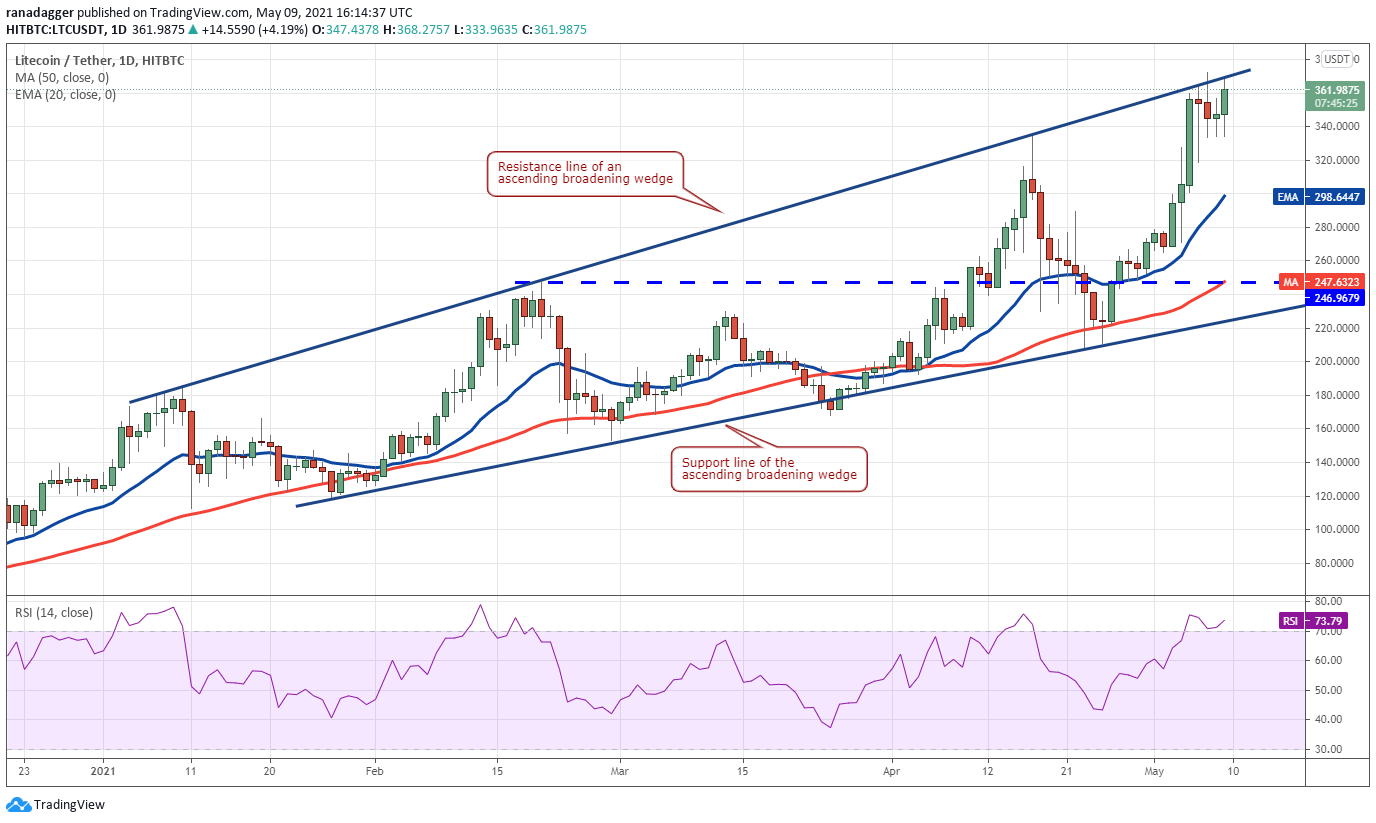 If the bulls can drive and sustain the price above $372.53, the LTC/USDT pair could start the next leg of the uptrend which could reach $400 and then $463.31. The rising moving averages and the RSI in the overbought territory suggest the path of least resistance is to the upside.

Contrary to this assumption, if the bulls fail to sustain the price above the resistance line, the short-term traders may dump their positions. That may result in a drop to the 20-day EMA ($298). A break below this support could open the gates for a decline to the 50-day SMA ($247). 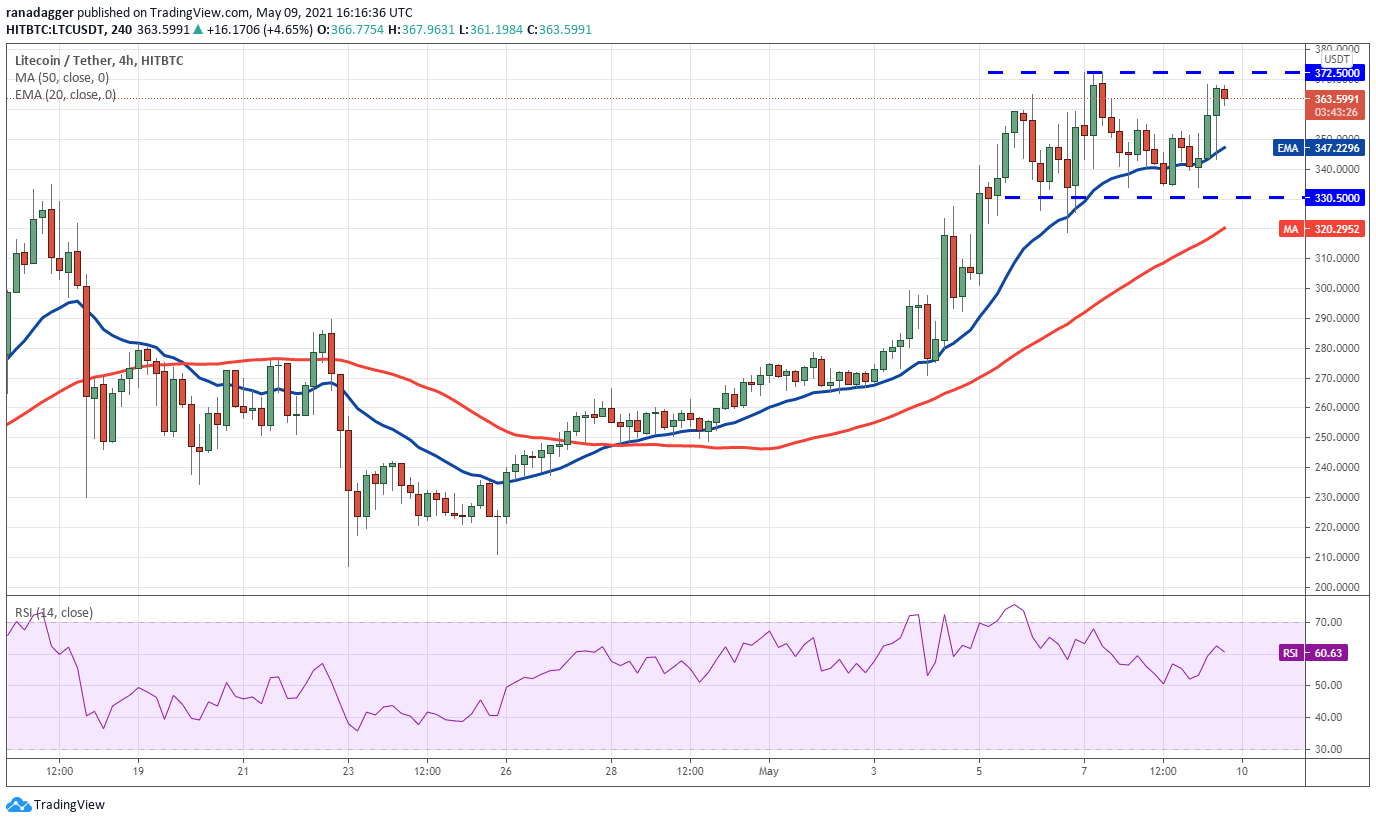 The 4-hour chart shows the pair is consolidating between $330.50 and $372.50. The bears have successfully defended the overhead resistance and are pulling the price toward the 20-EMA. If the price rebounds off this support, the bulls will make another attempt to resume the uptrend.

Conversely, a break below the 20-EMA could pull the price down to $330.50. A rebound off this support may extend the stay of the pair inside the range for a few more days. On the other hand, a break and close below $330.50 could signal the start of a deeper correction. The first support is at the 50-SMA and then $290.

Chainlink (LINK) is in an uptrend and it had hit a new all-time high at $51.96 on May 7. During a strong uptrend, corrections are shallow and the price tends to consolidate in a tight range before resuming the up-move. 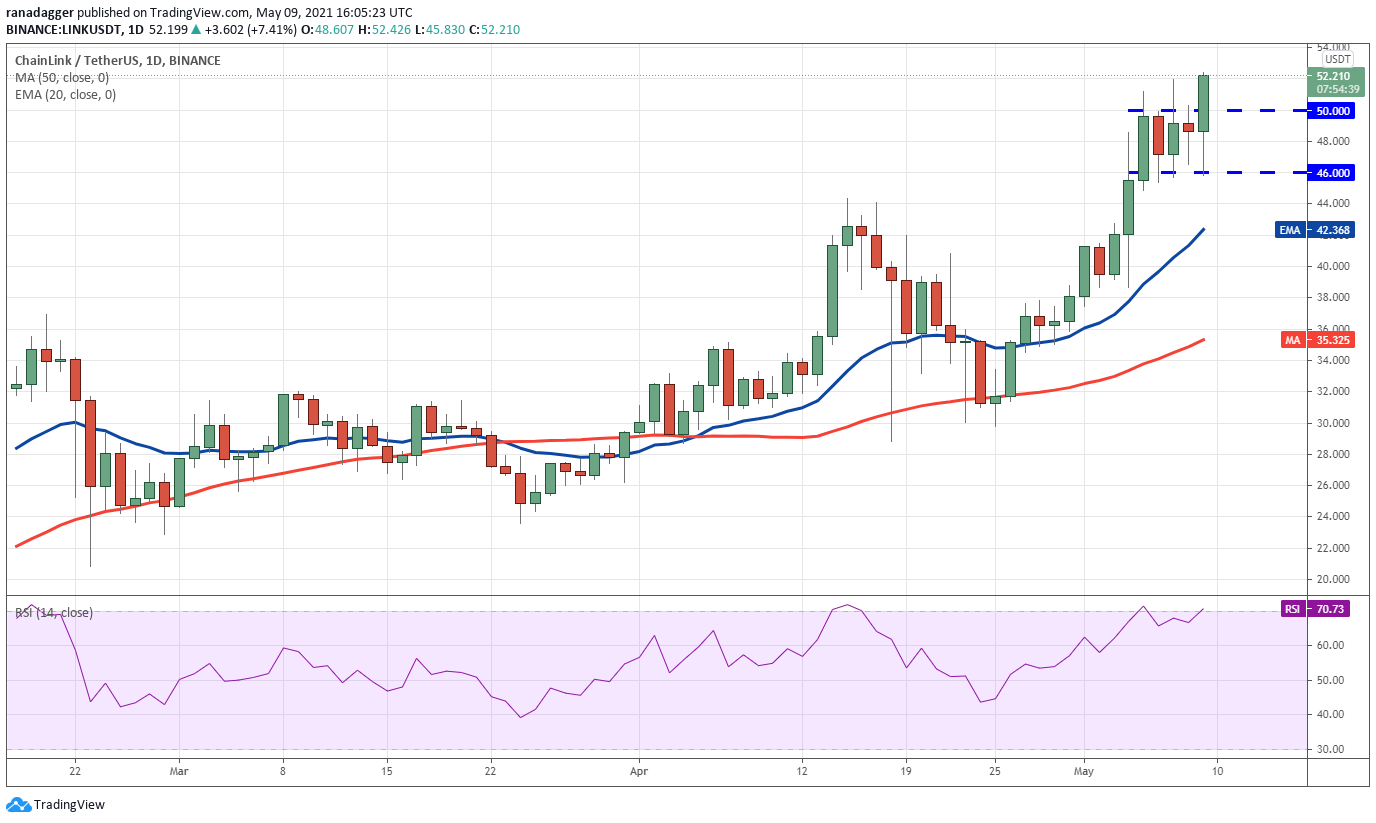 The long wick on the May 7 candlestick showed selling at higher levels and that was followed by an inside-day candlestick pattern on May 8, indicating indecision among the bulls and the bears. However, the upsloping 20-day EMA ($42) and the RSI in the overbought zone suggest that bulls have the upper hand.

If the bulls can sustain the price above $51.96, the LINK/USDT pair could resume its uptrend. The next target objective on the upside is $66.74.

On the contrary, if the price turns down from the current level and breaks the $46 support, the pair may drop to the 20-day EMA. A strong bounce off this support will suggest the sentiment remains positive. However, a break below the 20-day EMA will indicate the short-term momentum has weakened and a drop to the 50-day SMA ($35) is likely. 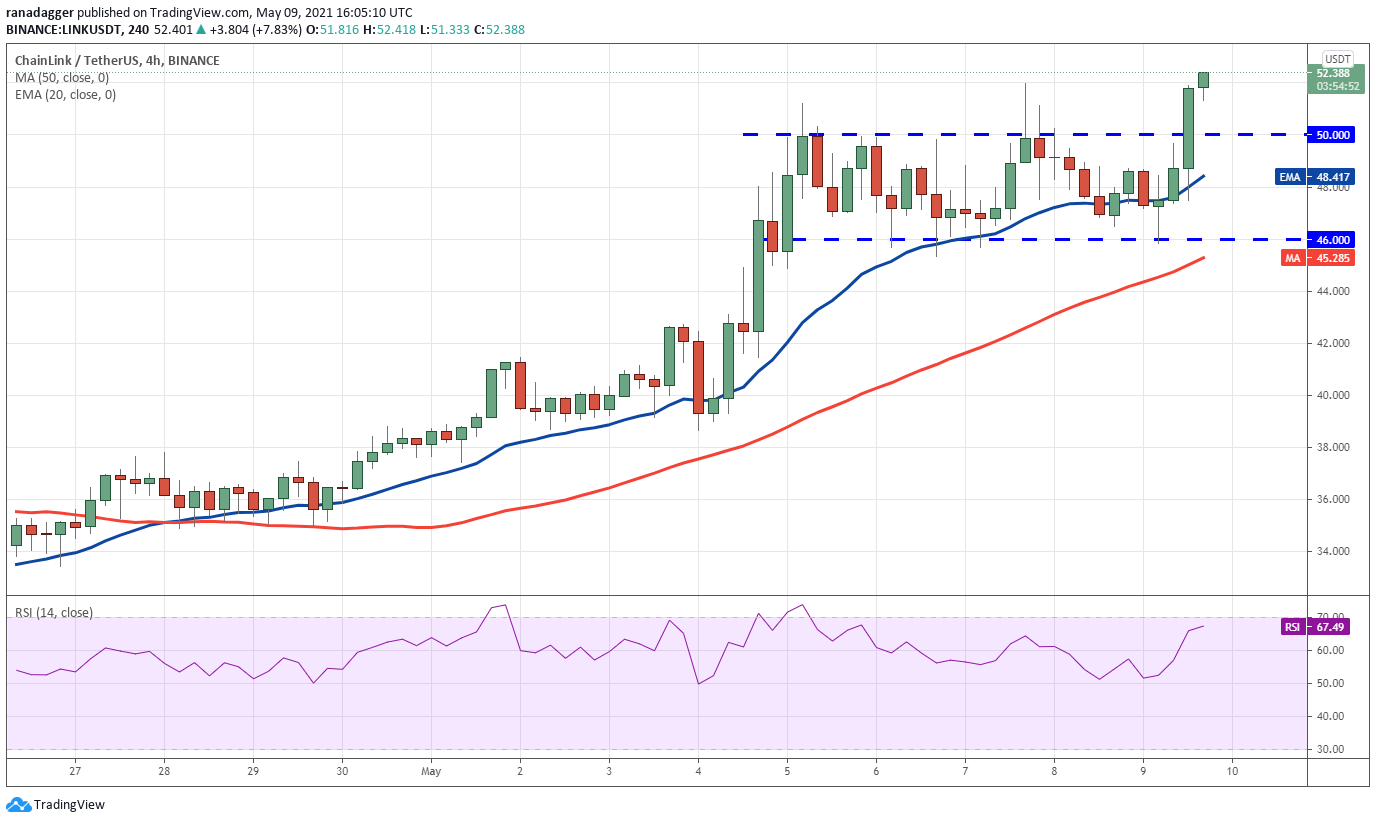 The 4-hour chart shows the price has broken out of the $46 to $50 range. This suggests the start of the next leg of the uptrend, which has an immediate target at $54. The 20-EMA has started to turn up and the RSI is above 67, indicating the bulls are in control.

However, if the price turns down and slips below $50, it will indicate the markets have rejected the higher levels. That may result in further selling that could pull the price down to the 50-SMA. A break below this level will suggest advantage to the bears. 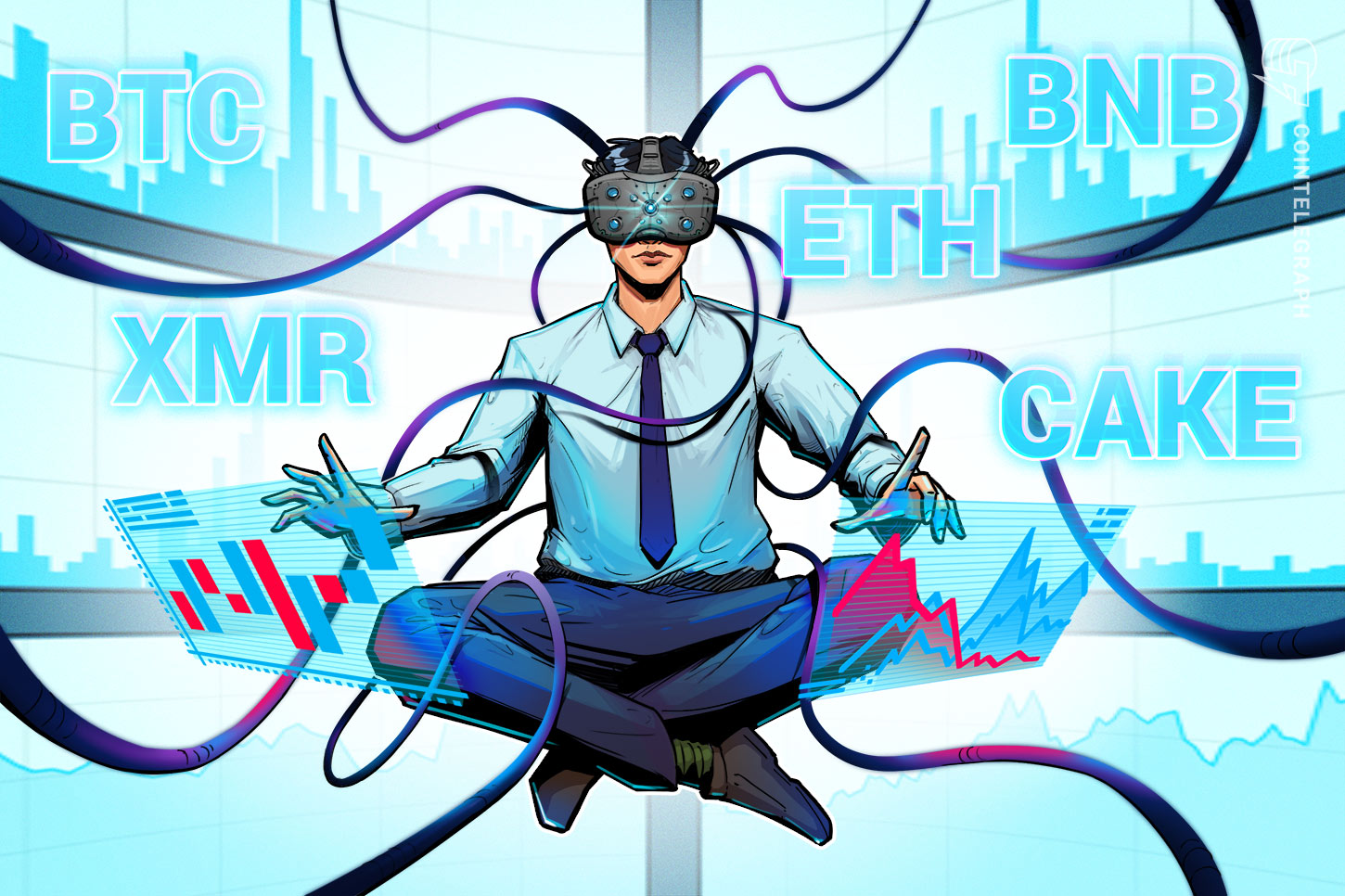 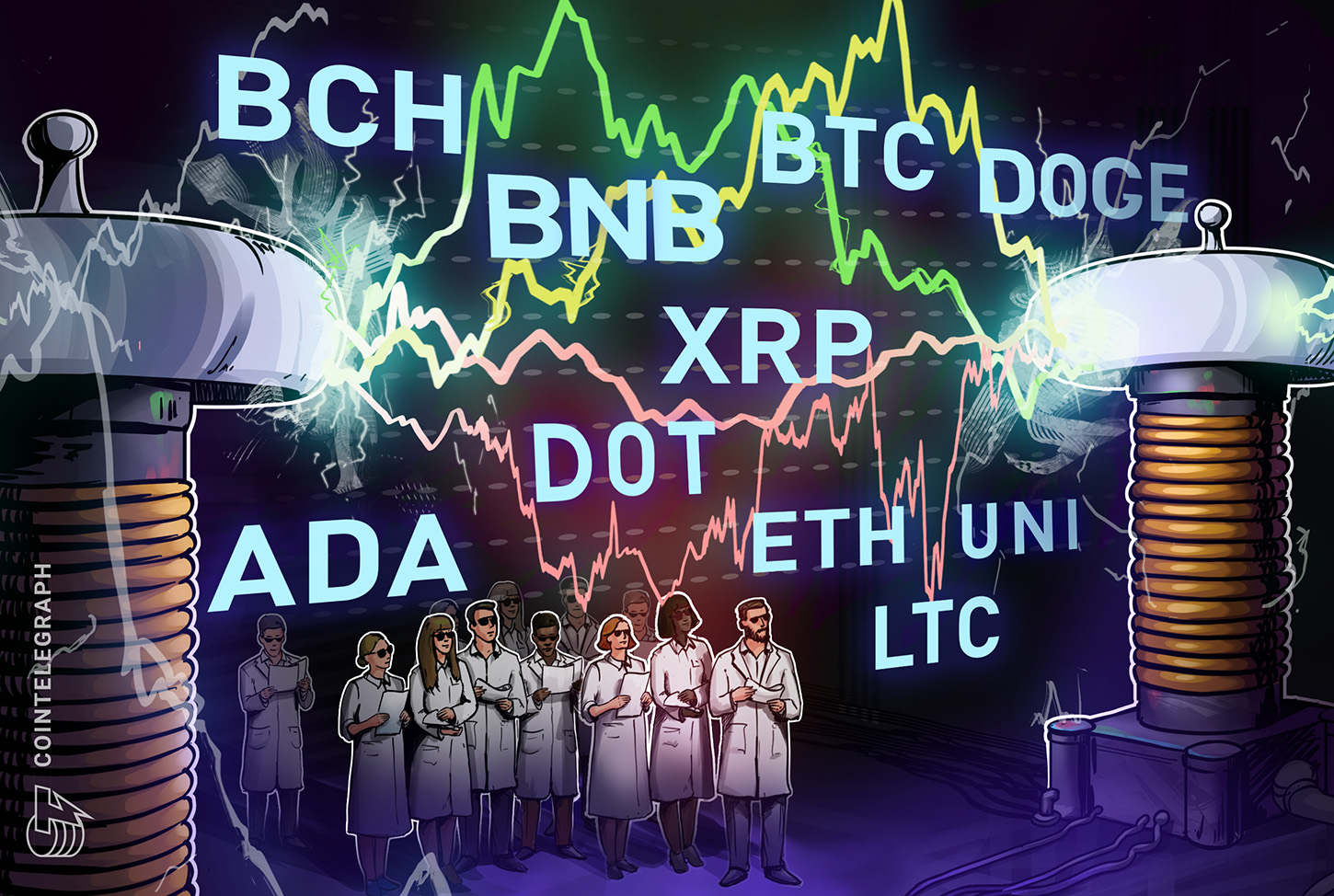 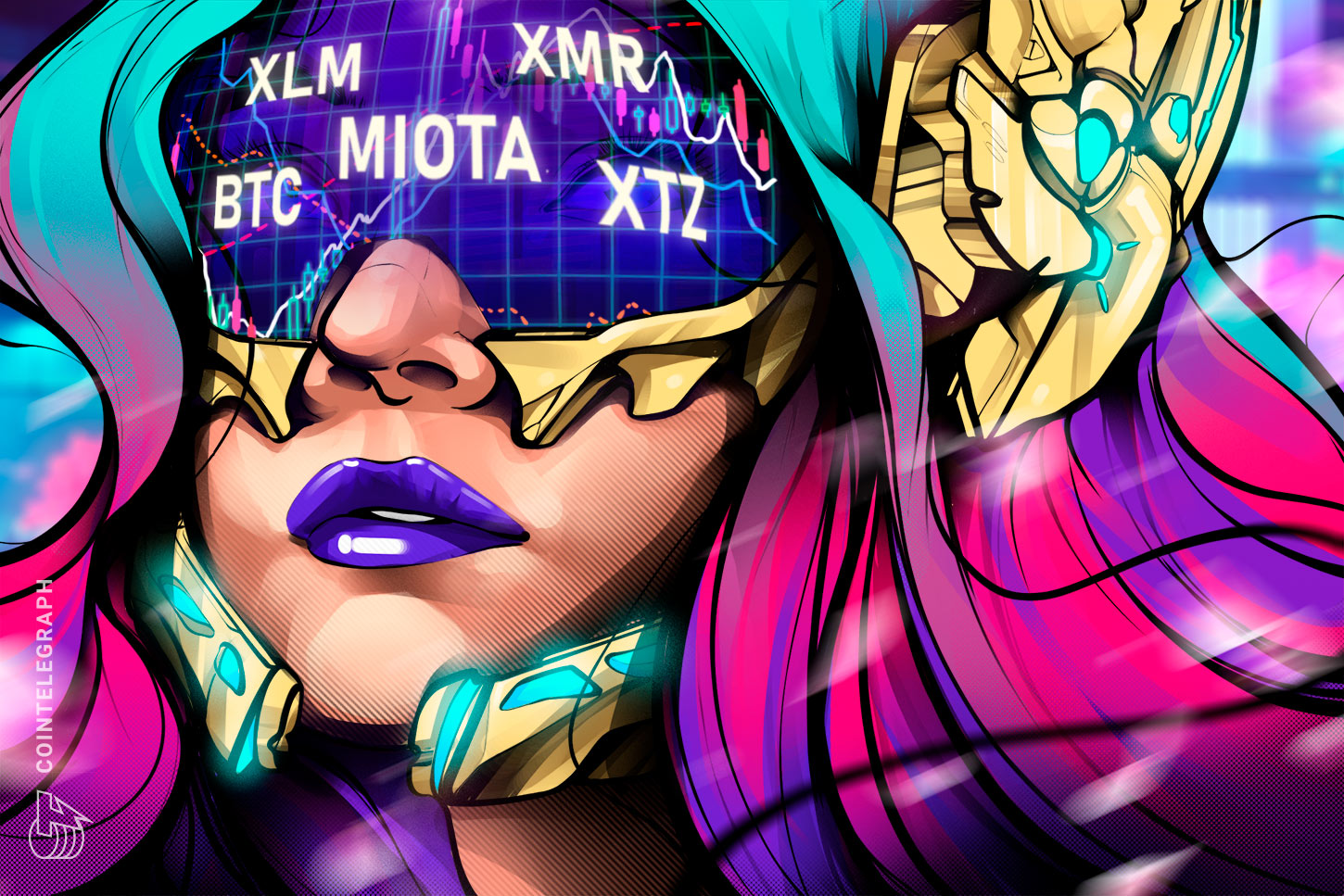