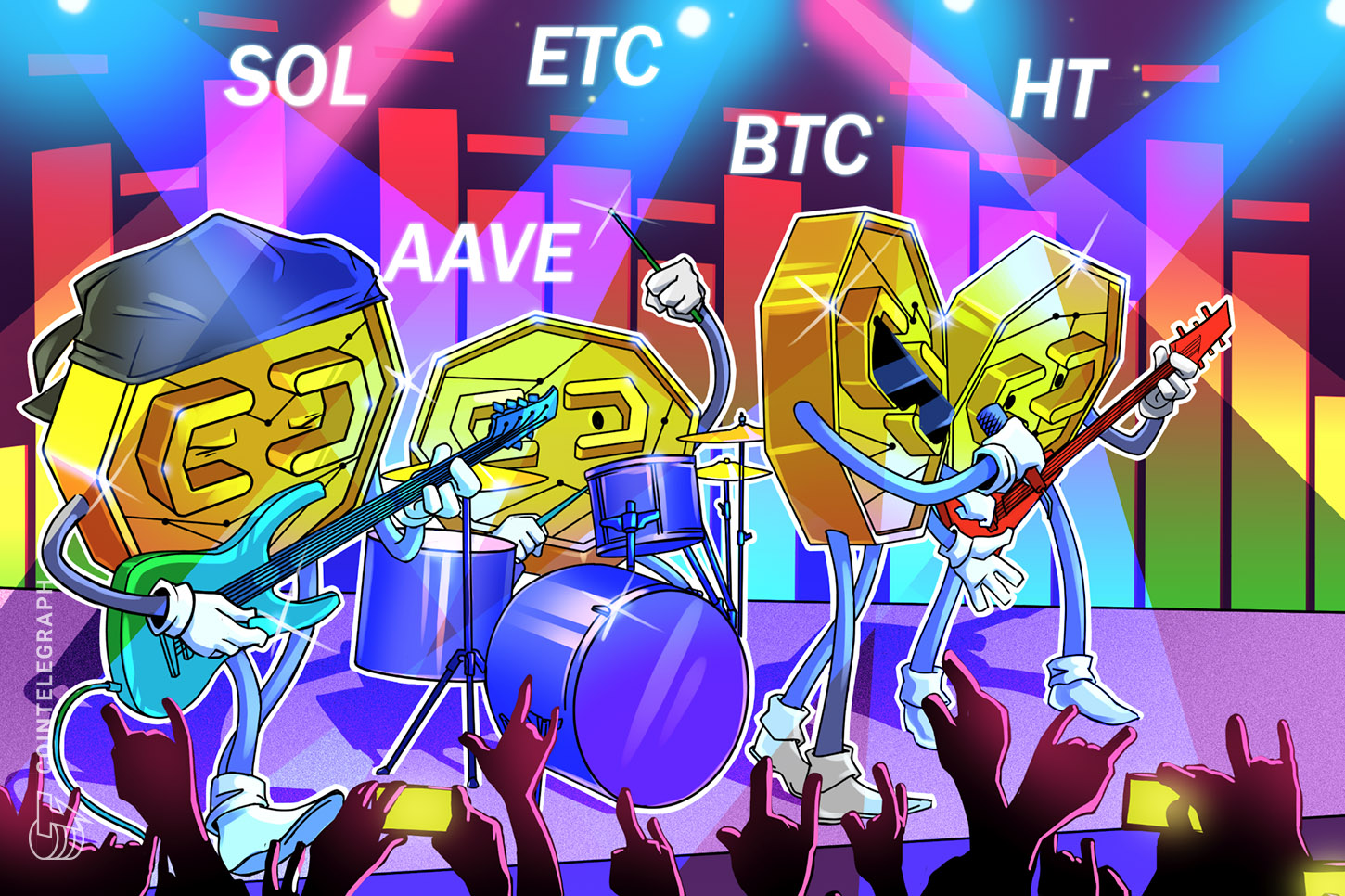 Bitcoin (BTC) price closed the month down 1.98% which according to data from Bybit, was its first negative close in April since 2015.

In the same month Ether (ETH) price soared over 44% to hit a new all-time high close to $3,000. This wide divergence between the top two cryptocurrencies shows that the markets have matured and Bitcoin’s underperformance is not affecting altcoins as much as it did in the past.

Ether’s bullish trend has attracted strong buying from traders. Data from Bybit suggests that Ether futures open interest climbed to $8.5 billion on April 29, rising 52% over the previous month. This increase has been supported by professional traders who seem to have taken a more bullish view on Ether than retail investors, as highlighted by Cointelegraph contributor Marcel Pechman. 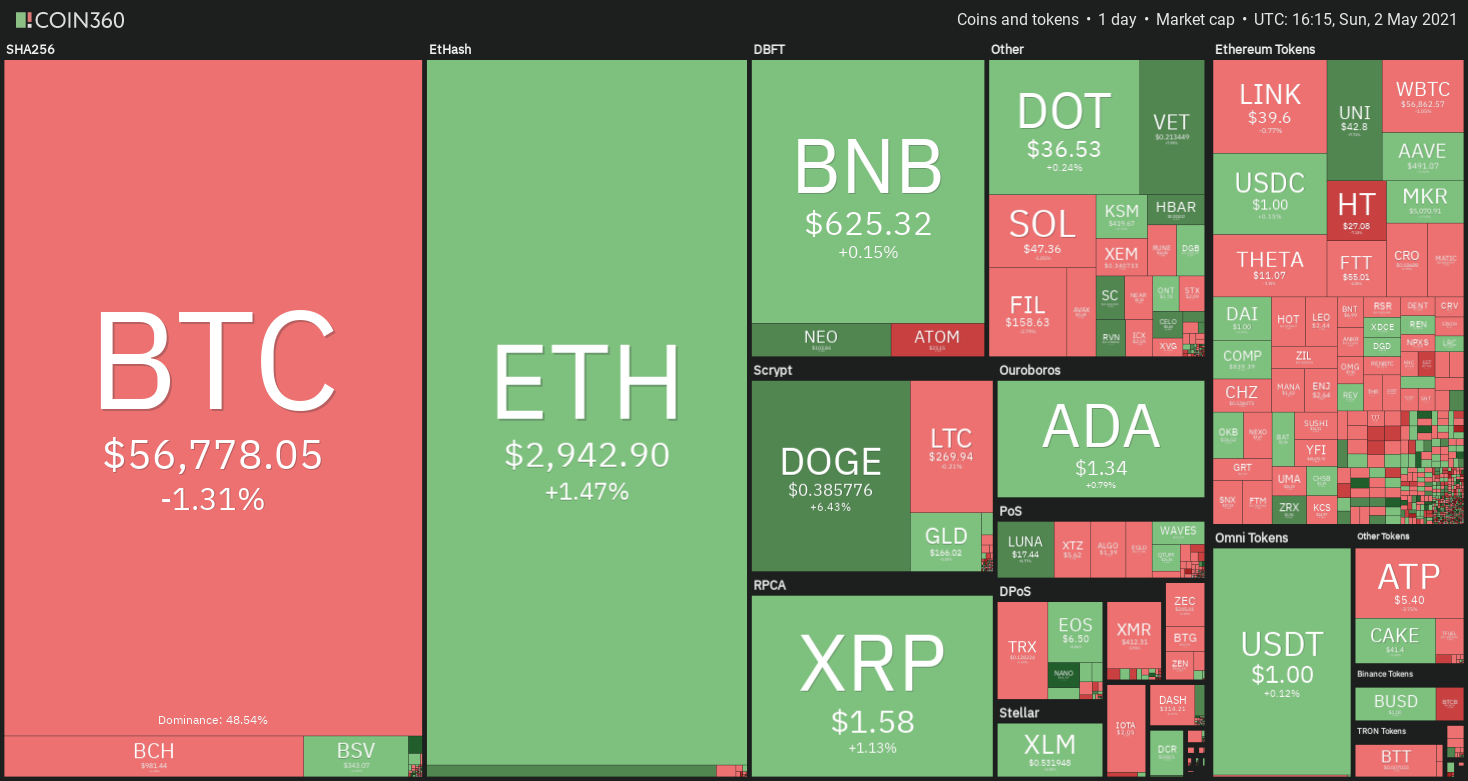 The strong performance from the crypto sector continues to attract a wide array of investors. According to the Financial Times, VC firm Andreessen Horowitz plans to tap into this growing demand by raising between $800 million to $1 billion for another fund. The flow of money into various crypto projects shows that investors are bullish for the long term.

T. Rowe Price CEO William Stromberg said in an interview with the Baltimore Business Journal that the crypto space is still in its infancy and it could “take years to really unfold.”

With Ether leading the altcoin charge, let’s look at the top-5 cryptocurrencies that may remain bullish in the short term.

Bitcoin soared above its moving averages on April 30 but the bulls have not been able to build on this strength. The Doji candlestick pattern on May 1 and the drop below the 50-day simple moving average ($56,833) today suggests the bears are selling at higher levels and have not given up. 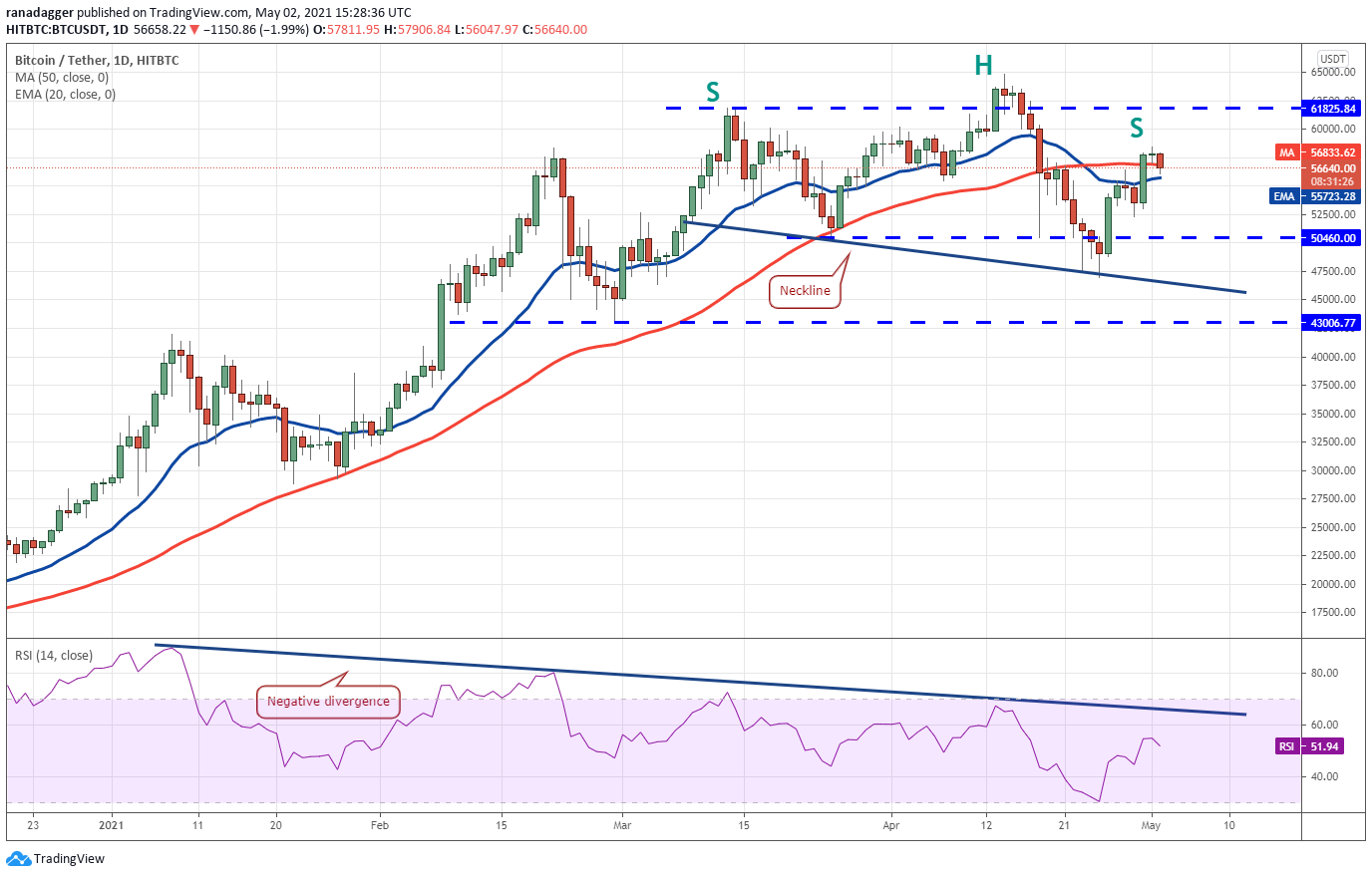 If sellers pull the price back below the 20-day exponential moving average ($55,723), the BTC/USDT pair could drop to $52,323.21 and then to $50,460. The flat moving averages and the relative strength index (RSI) near the midpoint suggest a balance between supply and demand. This could keep the pair range-bound for a few more days.

This view will invalidate if the pair rebounds off the 20-day EMA and rises above $58,469.09. Such a move will suggest the bulls are buying on every minor dip. The pair could then rally to $61,825.85 where the bulls are again likely to face stiff resistance from the bears.

Although it is too early to confirm, the pair seems to be making the right shoulder of a possible head and shoulders topping formation. This setup will complete on a break below the neckline. Until then, traders can be watchful but should not jump the gun in anticipation of a breakdown. 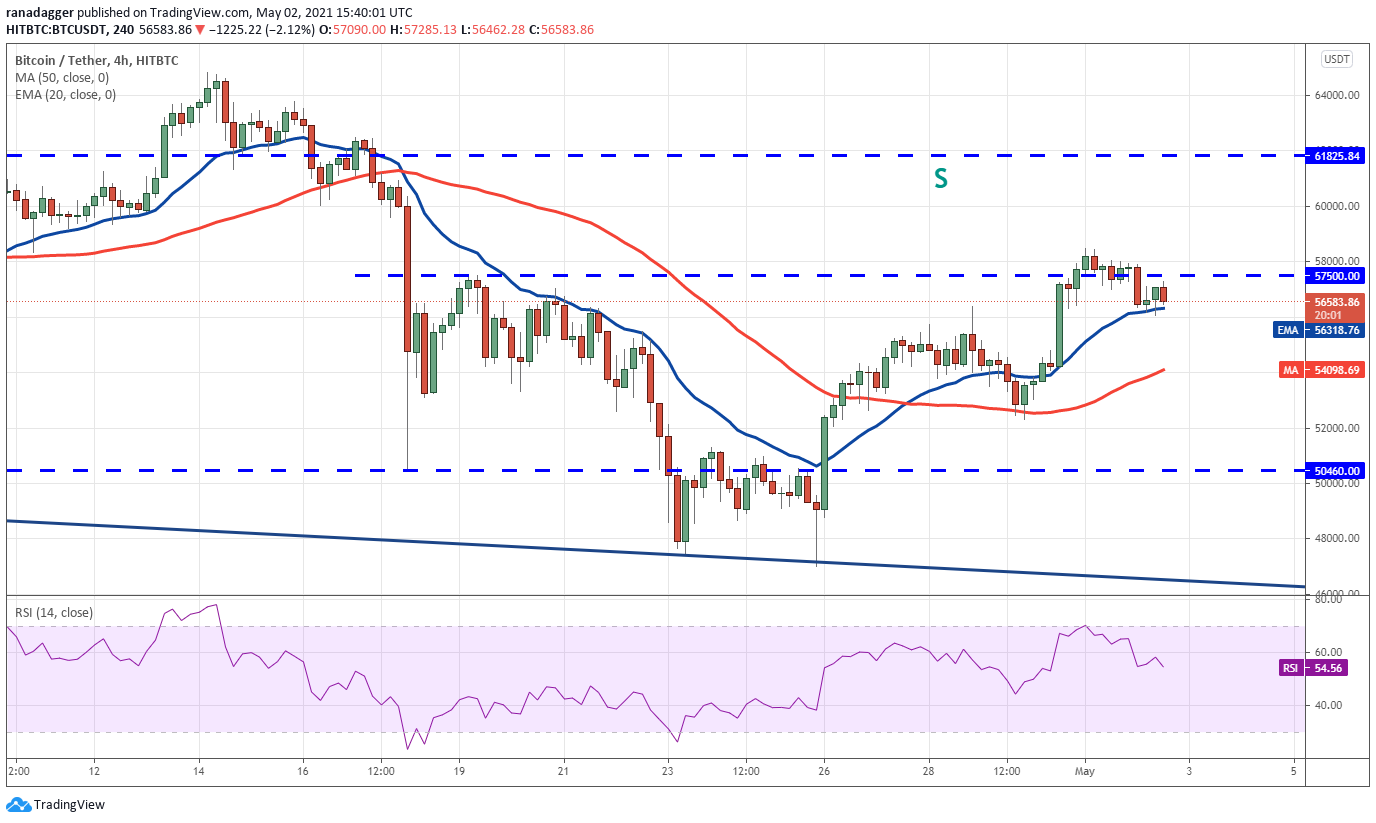 The 4-hour chart shows the bulls pushed the price above the $57,500 resistance but could not sustain it. The bears pulled the price back below the level and are trying to break the 20-EMA support. If that happens, the pair may drop to the 50-SMA.

A strong rebound off this support could encourage the bulls to make one more attempt to clear the hurdle at $57,500. If they succeed, the pair could start its journey to $61,825.84. Conversely, if the bears sink the price below the 50-SMA, the possibility of a drop to $50,460 increases.

Solana (SOL) broke above the $48.64 resistance on May 1 and hit a new all-time high at $49.99 today. However, the $50 psychological level is acting as a resistance and the bears have pulled the price back below $48.64 today. 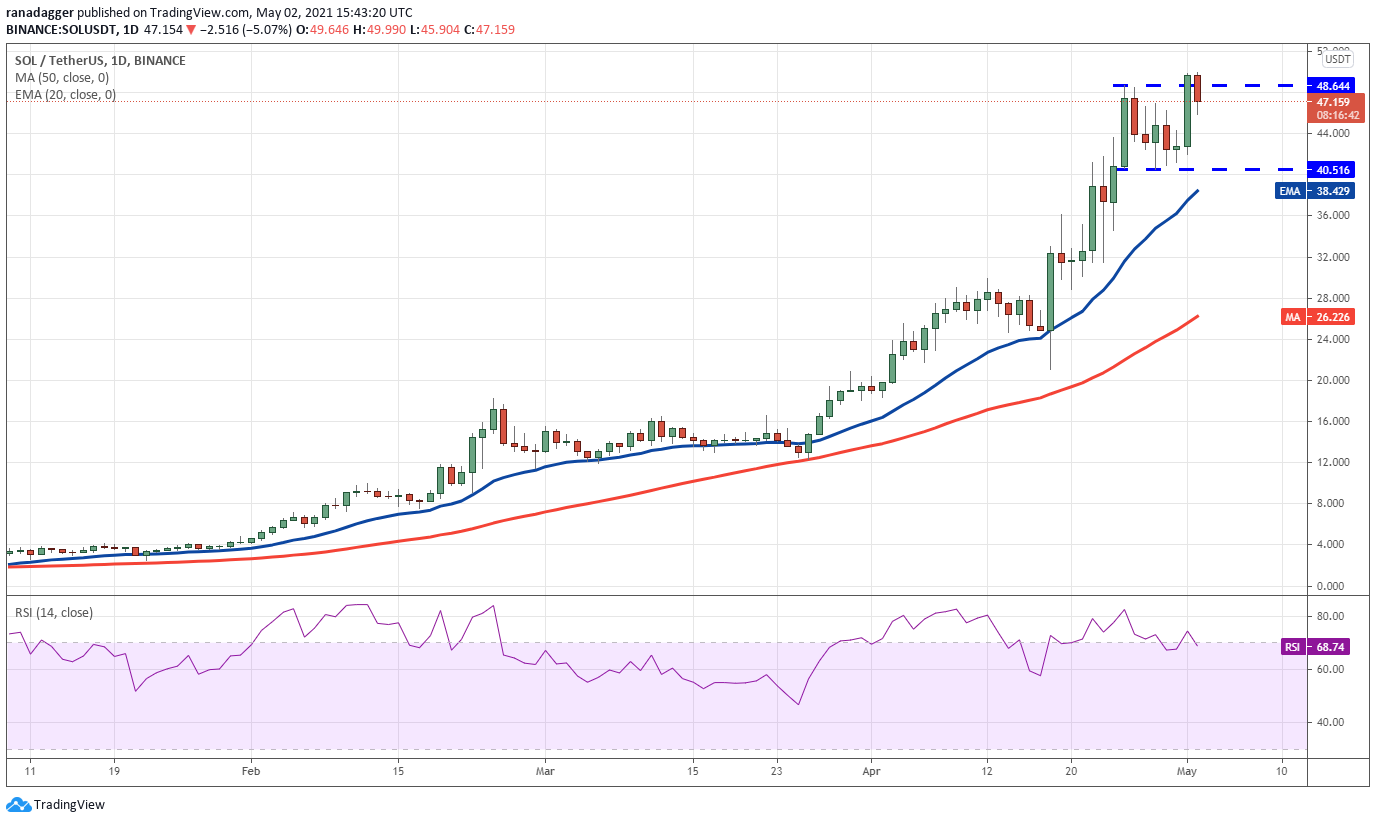 If the bears sustain the price below $48.64 for two days, the SOL/USDT pair could drop to the support at $40.51. A strong rebound off this support will suggest the bulls are accumulating on dips. The bulls will then make one more attempt to clear the $50 resistance.

If they succeed, the pair may start the next leg of the uptrend that could reach $56.77 and then $68.05. The rising moving averages and the RSI near the overbought territory indicate the path of least resistance is to the upside.

This positive view will invalidate if the price breaks below the 20-day EMA ($38). If that happens, the pair could correct to the 50-day SMA ($26). 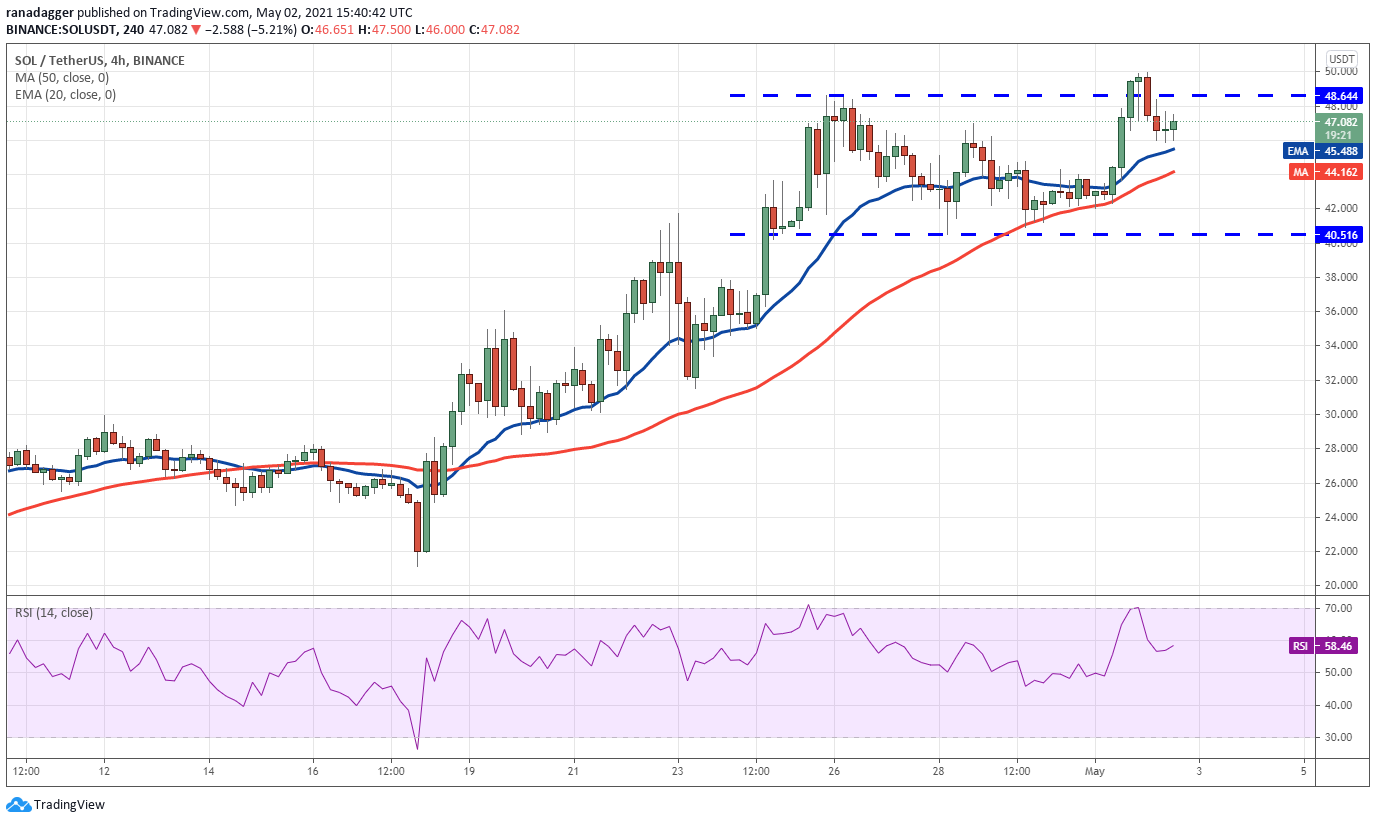 The 4-hour chart shows the bulls are trying to defend the 20-EMA. If they can push the price above the $48.64 to $49.99 overhead resistance zone, the momentum is likely to pick up. The gradually rising 20-EMA and the RSI in the positive territory suggest the bulls have a minor advantage.

Contrary to this assumption, if the price turns down from the overhead resistance once again, it will increase the prospects of a break below the moving averages. The bears may then pull the price down to $40.51. A strong bounce off this support could keep the pair range-bound for a few days.

Huobi Token (HT) surged above the resistance at $26.89 on May 1 and hit a new all-time high at $29.54 today. However, the bears are trying to pull the price back below the breakout level and trap the aggressive bulls. 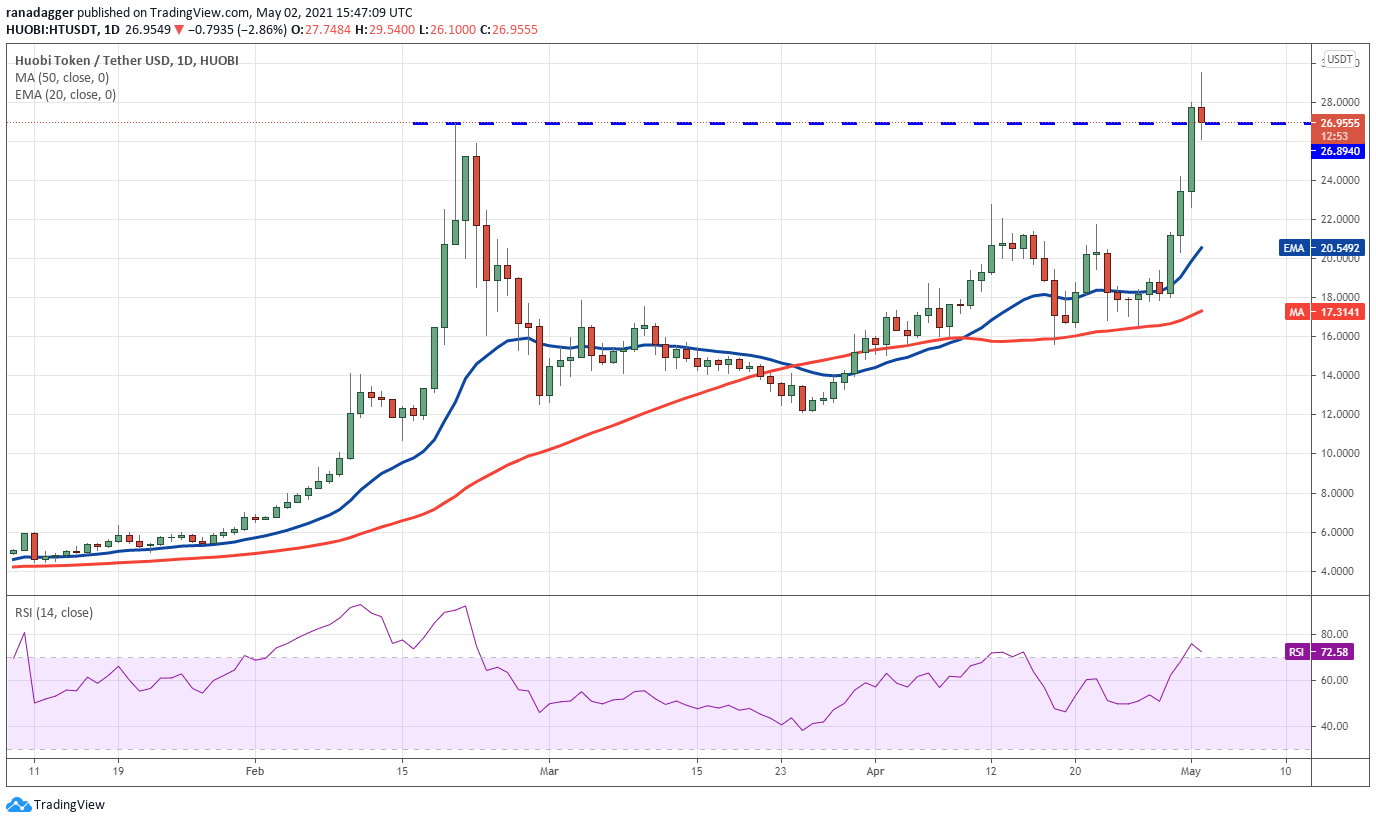 If the price dips and sustains below $26.89 for three days, the HT/USDT pair could gradually drop to $22. A strong rebound off this support could keep the pair range-bound for a few days.

Conversely, if the bulls defend the $26.89 support or do not give up much ground below $25, it will suggest strong buying on every minor dip. A break above $29.54 could resume the uptrend with the next target objective at $36.54.

The 20-day EMA ($20.54) has turned up and the RSI is in the overbought zone, indicating that the bulls are in control. 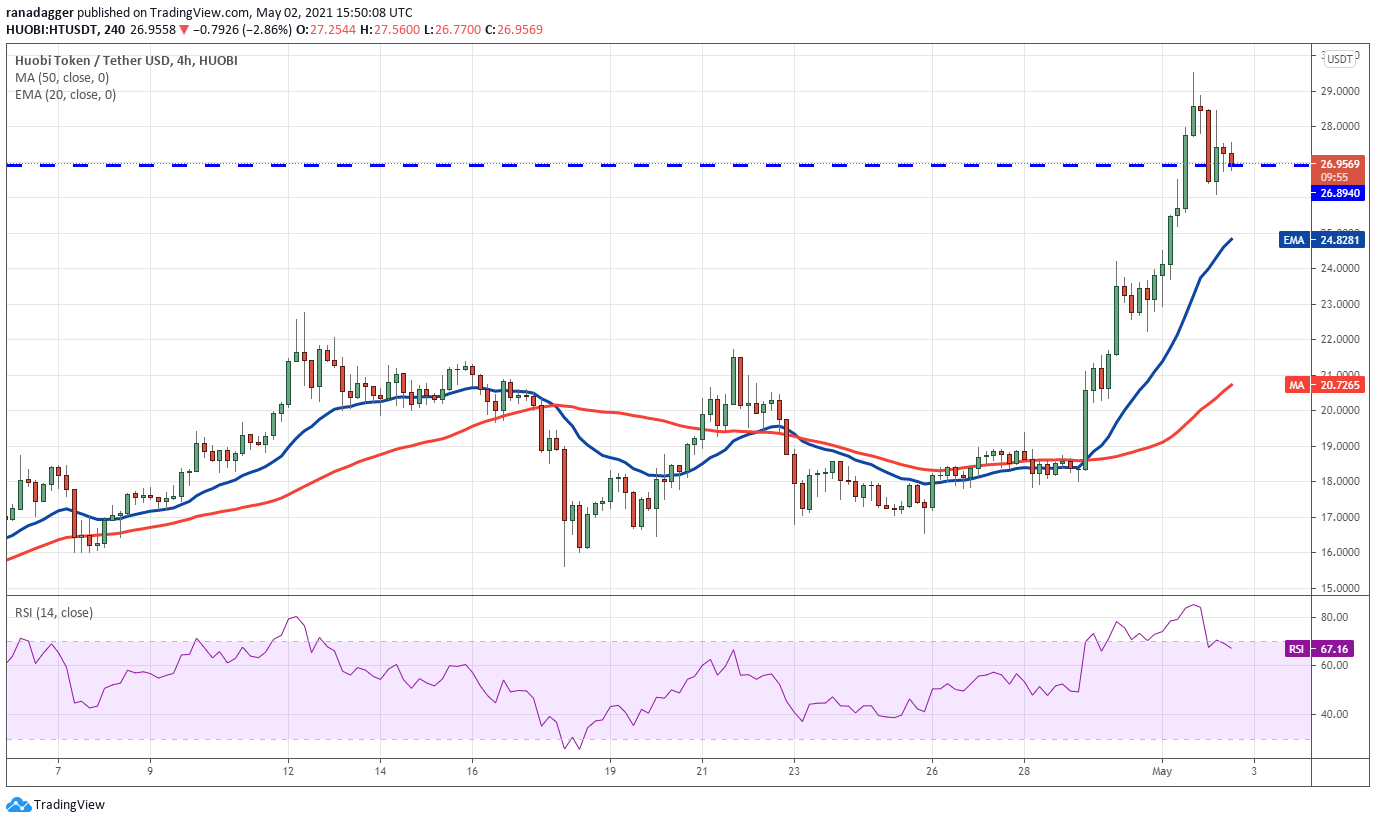 The bulls and the bears are battling it out for supremacy near the $26.89 level. Although the bears had pulled the price back to $26.10, they could not sustain the lower levels. This suggests that bulls are buying on dips.

The rising moving averages and the RSI near the overbought zone suggest the bulls have the upper hand. However, the bulls are finding it difficult to push the price to $29.54. This could result in high volatility in the short term.

A break below $26 could pull the price down to the 20-EMA. If the price rebounds off this level strongly, the bulls will make one more attempt to resume the uptrend. Alternatively, a break below the 20-EMA could signal the start of a deeper correction.

The bears are trying to stall Ethereum Classic’s (ETC) up-move in the $38 to $41.61 overhead resistance zone. However, the long tail on today’s candlestick suggests that traders are buying at lower levels. 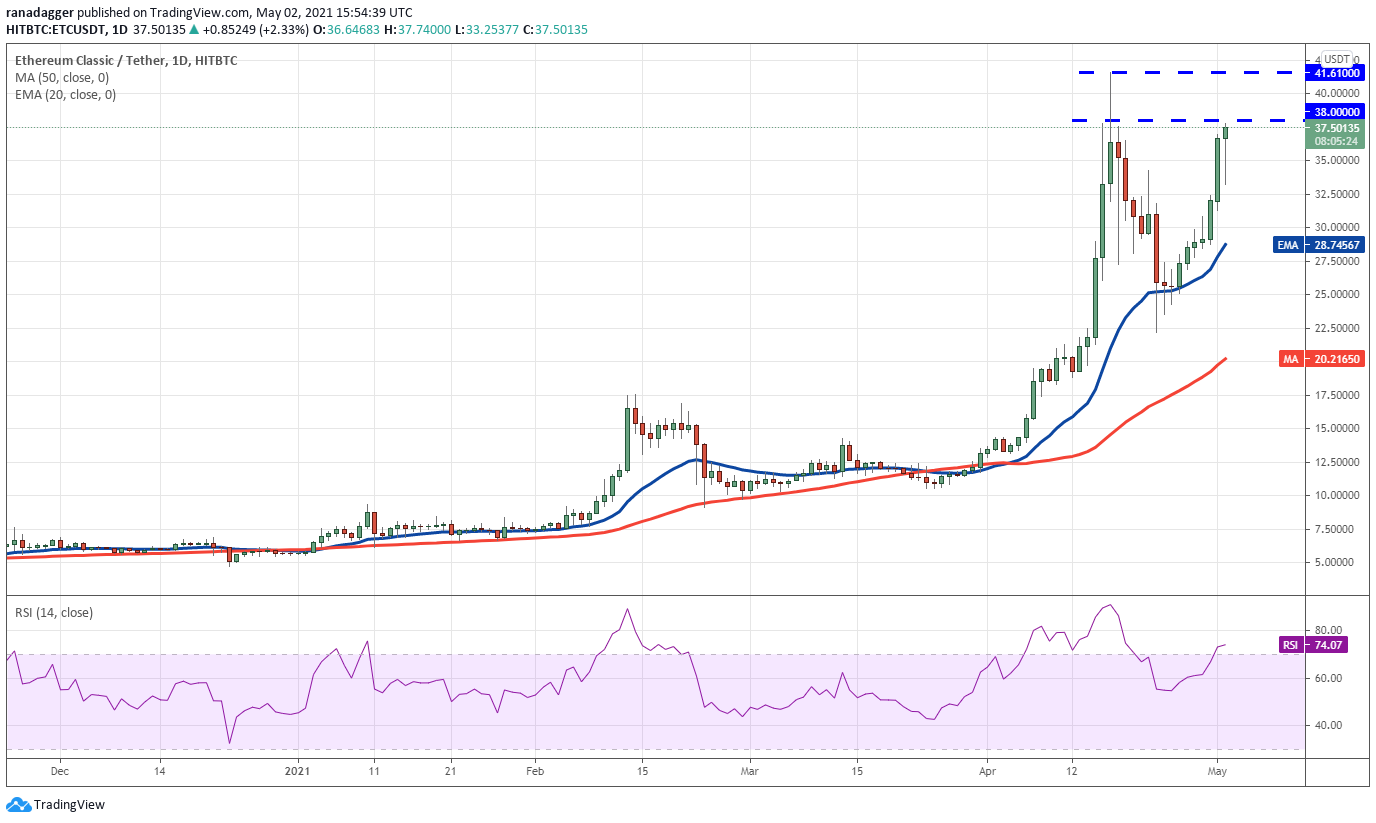 The upsloping 20-day EMA ($28.74) and the RSI in the overbought zone indicate advantage to the bulls. If buyers propel the price above the overhead zone, the ETC/USDT pair could resume the uptrend and rally to $53.21.

Contrary to this assumption, if the price turns down from the overhead zone, the bears will try to sink the pair to the 20-day EMA. A break below this support will indicate the bullish momentum has weakened and the pair could then drop to $22.20.

The 20-EMA is rising and the RSI is in the overbought zone, suggesting the bulls are in control. However, the bears will not throw the towel easily. They will try to stall the up-move in the overhead zone.

A break below the 20-EMA will be the first sign that the bullish momentum may be weakening. That could pull the price down to the 50-SMA. Such a move could keep the pair stuck inside the range for a few days.

The bulls pushed AAVE above the $489 resistance today. However, they have not been able to sustain the buying at higher levels and the bears have pulled the price back into the $480 to $280 range today. This suggests the bears are attempting to trap the aggressive bulls who may have purchased the breakout from the range. 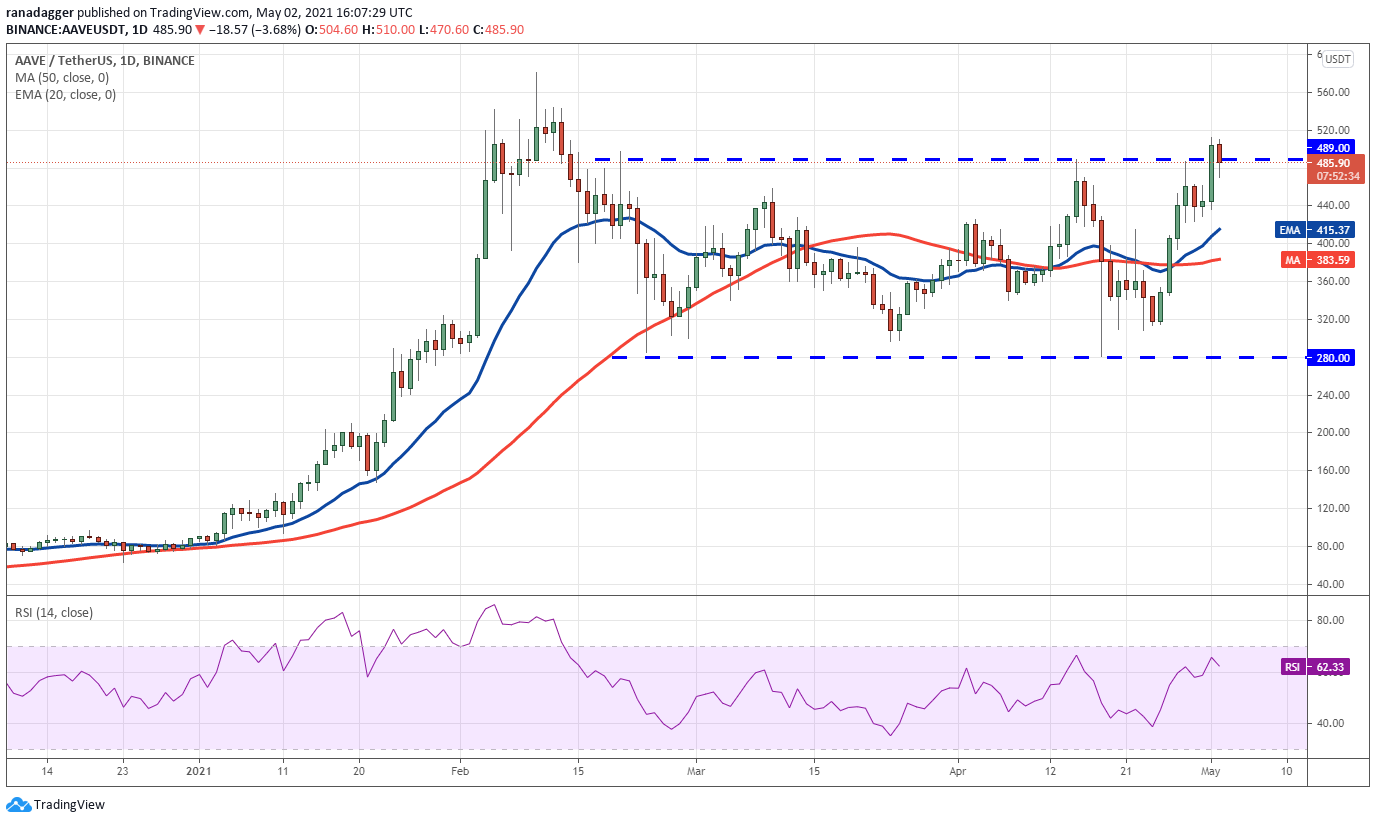 If the price dips below the 20-day EMA ($415), it will suggest that bulls are not buying on dips. That could pull the price down to the 50-day SMA ($383) and extend the stay of the AAVE/USDT pair inside the range for a few more days.

On the contrary, if the pair rebounds off the 20-day EMA, it will indicate accumulation at lower levels. The bulls will then make one more attempt to push the price to $581.67. A breakout of this level could start the northward journey to $698.

VORTECS™ data from Cointelegraph Markets Pro shows the bullish trend in AAVE has continued from April 25, barring a couple of momentary dips to 63. 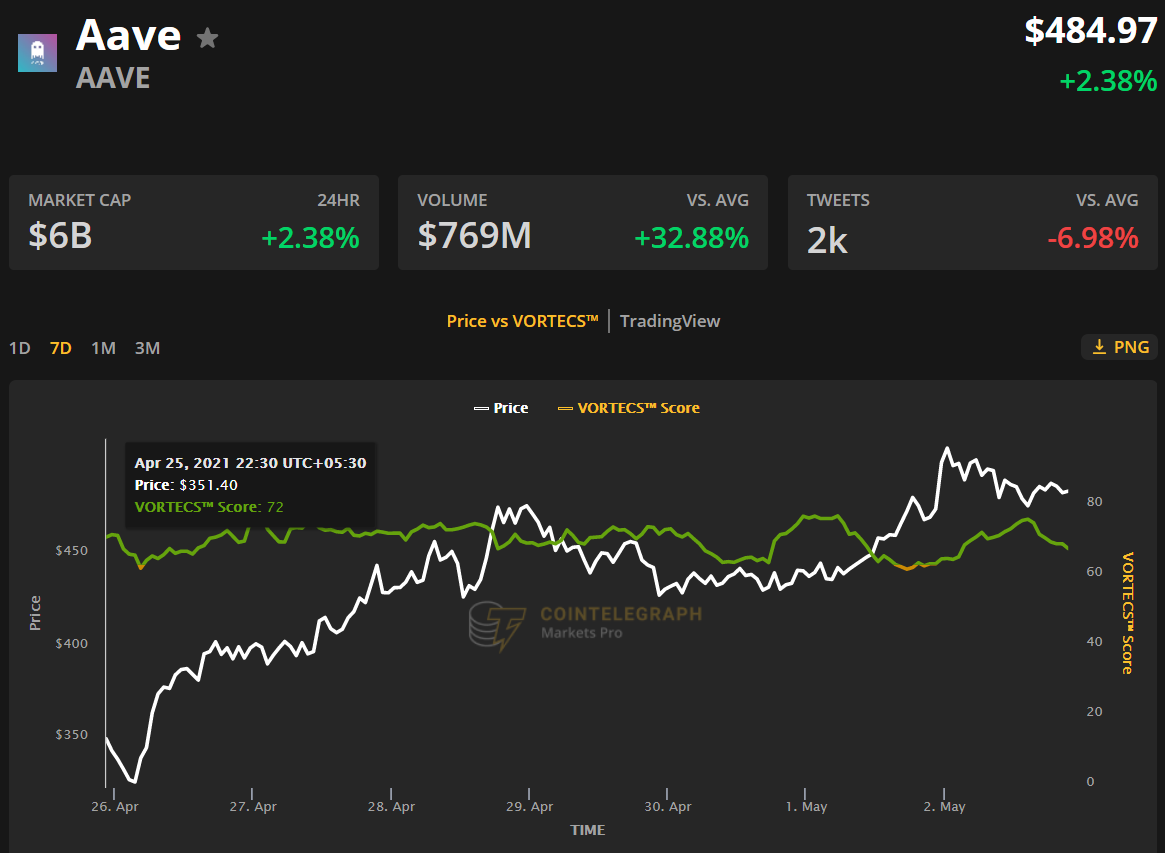 As seen in the chart above, the VORTECS™ Score for AAVE has consistently remained in the green since April 25 when the price was at $351.40.

The strong VORTECS™ Score could have held back traders from booking profits early and leaving profits on the table. AAVE has rallied to $509.83 today, recording a gain of 45% in just over a week. 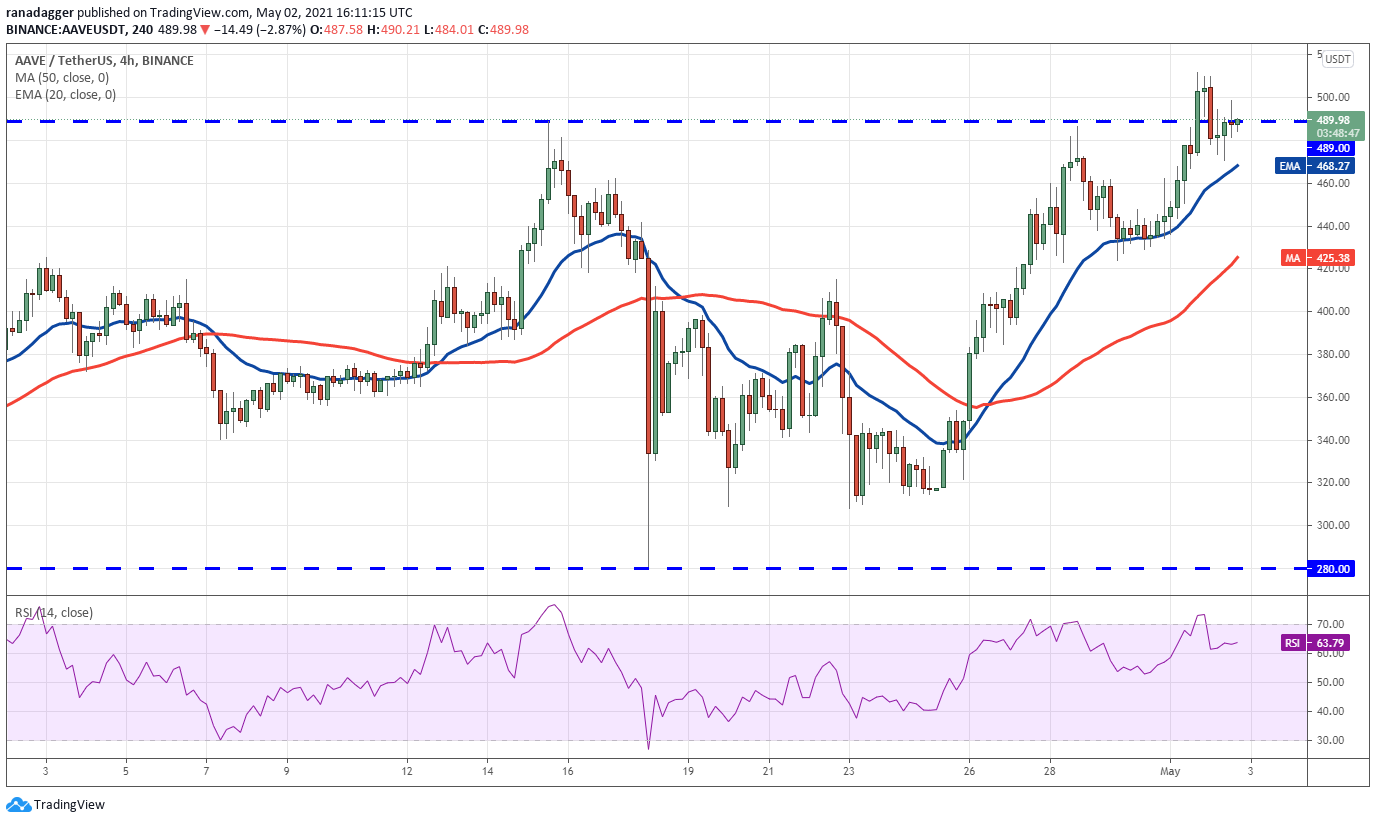 The 4-hour chart shows the bulls purchased the dip to the 20-EMA and are again trying to drive the price above the $489 to $512 resistance zone. The rising moving averages and the RSI above 63 suggest the path of least resistance is to the upside.

This bullish view will weaken if the bears pull the price below the 20-EMA. That could suggest that supply exceeds demand. The pair may then drop to the 50-SMA. If this support holds, the pair may consolidate between $420 and $489 for a few days before starting the next trending move.