Ripple attempted to extend the up leg past $1.5 on Tuesday, but bulls hit a wall at $1.47. A minor correction occurred with the price sliding under the 100 Simple Moving Average (SMA) on the four-hour chart. At the time of writing, XRP trades at $1.39 while bulls battle the immediate moving average resistance.

The short-term technical picture brings to light a potential sideways trading action. This follows the Relative Strength Index (RSI) on the four-hour chart stalling slightly under the overbought region. The indicator levels at 60 imply that the tug between the bears and the bulls is at a stalemate.

Similarly, the Moving Average Convergence Divergence (MACD) indicator affirms the consolidation period. The indicator assumes a leveling motion in the positive region, thus the possibility of the sideways trading taking over.

It is vital to note that the MACD line (blue) has settled above the signal line, which means that buyers still have the upper hand. Therefore, making a confirmed break above $1.4 may validate the uptrend. On the other hand, breaking above $1.5 could trigger more buy orders as speculation mounts for gains beyond $2. 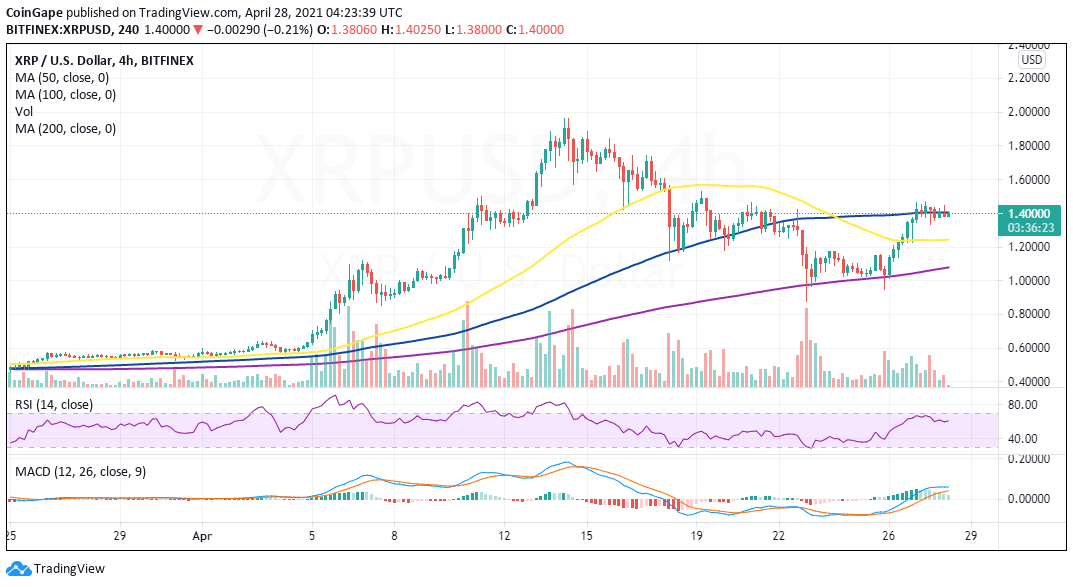 On the flip side, another daily close under the 100 SMA could see the overhead pressure mount. On the downside, correction from the current price levels may retest the support at $1.2 if the 50 SMA does little to stop the losses. If push comes to shove, XRP may freefall to $1 and perhaps retest the primary support at $0.85.