Microsoft and Intel Introduce a Shield Against Cryptojacking 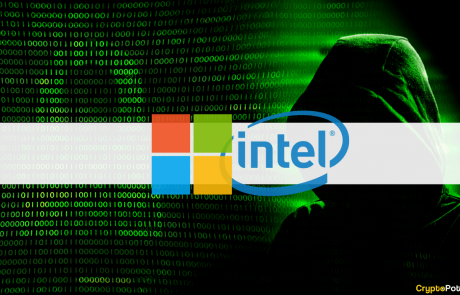 The tech giant Microsoft has integrated the Intel Threat Detection Technology into its Microsoft Defender for Endpoint. This should increase detection ability and enhance protection against cryptojacking malware.

The New Addition and Its Technology

During the last few years, the primary cryptocurrency along with the many other altcoins have significantly appreciated in value which caused an uptick of interest for crypto mining as well. The process involves validating data blocks and adding transaction records to a public ledger known as a blockchain.

However, this caught the attention of bad actors and cybercriminals. By setting up coin miners on electronic devices of victims, hackers are able to mine digital assets without their knowledge.

Cases of such illicit activities have skyrocketed lately. A recent Avira report revealed that there was a rise of 53% in coin miner attacks in Q4 2020 in comparison to Q3 2020.

To fight these threats, the tech behemoth Microsoft has partnered with Intel to integrate the latter’s Intel Threat Detection Technology or TDT. The innovation is established on telemetry signals coming straight from the PMU.

As coin producers issue duplicated mathematical operations, saved by the PMU, the new development generates a warning when a certain verge is attained.

The tech corporation reported that its product doesn’t require further investments, IT configuration, or installation of agents.

Michael Nordquist, Senior Director of Strategic Planning at Intel, said the innovation would be highly effective and useful to the customers:

”The scale of this CPU-based threat detection rollout across customer systems is unmatched and helps close gaps in corporate defenses.”

As briefly mentioned above, hackers are able to mine cryptocurrencies using other people’s devices in a process called cryptojacking. They maximize their gains by avoiding paying the high electric bills, while still profiting from lucrative crypto assets.

According to a Kaspersky report from last year, cryptojacking attempts have surged by 300% in Q1 of 2020. The paper outlined nations in the Southeast Asia region as the most affected countries. Furthermore, Singapore has seen 11,700 cryptojacking attacks just for the first three months of the year.

On the other side of the globe, Mexico has also reported cryptojacking assaults on a rising level. Local organizations have complained that their networks were dangerously exposed to external hazards.