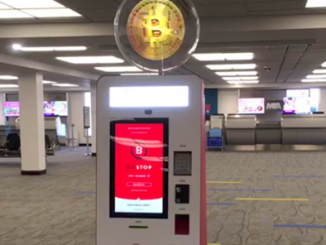 Blue Ridge Bank, a Virginia-based commercial bank says it has become the world’s first commercial financial institution to allow the purchase and sale of Bitcoin via its 19 ATMs located in the state. Brian K. Plum, the chief executive officer of Blue Ridge Bank revealed that the decision to offer Bitcoin purchase comes in the wake of rising demand for the top cryptocurrency. He said,

“We try to be forward-looking with what we are doing and anticipate our customers’ needs – both present and future customers,”

The commercial bank has partnered with BluePoint ATM Solution, a leading Bitcoin ATM software service provider in the United States. Justin Pence, chief operating officer at BluePoint ATM said that even though Bitcoin ATMs are nothing new in the US, the one being offered by Blue Ridge would be one of its kind as it would allow for direct cash purchase and sale using traditional ATMs.

The CEO of BluePoint ATM Wade Zirkle explained how the series of Blue Ridge ATMs would be different from other Bitcoin ATMs.

“With ours, you can purchase [Bitcoins] by using your debit card balance and redeem [Bitcoins] with the cash spitting out in exchange. You can make Bitcoin transactions that settle in real-time. Our software is layered on top of the traditional cash dispensing software at ATMs.”

The ongoing bull run has helped bitcoin become mainstream as institutions and retail both have shown strong demand for the top cryptocurrency. The same banking systems which had discarded Bitcoin once claiming it to be bubble are now forced to offer direct bitcoin sale and purchase owing to the huge demand.

Last week Visa, the payment processing giant started a pilot API for its banking partners that would allow their customers to make direct purchases and sales of bitcoin via banks. Not just banks, Tesla along with buying $1.5 billion Bitcoin also revealed that they would accept Bitcoin as a payment for their premium electric cars. The growing adoption of Bitcoin by institutions and commercial banks has also shut down the argument about bitcoin not able to be used for real-world purchases.