Whale Accumulations at the Peak, Do Whales Know Something Which is Hidden From the Crypto Space? The crypto markets are currently been witnessed a good opportunity to stack up some and wait until the conditions stabalize. Many influencers and analysts believe the current bearish market is nothing but a bear trap spread out to accumulate the assets let out by the weak hands, mainly by the whales!

Is the bear trap laid out by the whales, as their accumulation is slowly reaching the peak?

Do the whales and the institutions know more than the retail traders?

What is compelling them to accumulate more despite their earlier holdings having incurred a significant loss?

Let us dig in more!

A cryptocurrency whale or a crypto whale or just a ‘Whale’ is referred to an individual or an entity who holds a large amount of an asset. They have enough share of the circulating supply and carry the huge potential to manipulate the price variations. Some examples include, the top 100 BTC wallets holding nearly 15.36% that’s more than 2 million BTC out of 19 million. While Dogecoin whales collectively hold nearly 52% or 29.5 billion DOGE.

These large holdings are closely monitored by the experts and tracked by the on-chain platforms as they have the potential to pump or dump the price. Most of the whales remain passive, but if in case any whale makes any transactions, it is been publicly announced. The whales always wait for the right opportunity, specifically the market crash to accumulate more. In some cases cause bear markets accumulate more.

What are Whales Accumulating Now?

It has to be noted that each crypto asset has its whale and keeps on accumulating the respective asset during each dip. However, the current scenario is a little different as the whale’s accumulated other assets with huge volumes.

Bitcoin whales have been accumulating more bitcoin in every dip. The BTC whales began accumulating in the second half of 2020 and sold when the asset smashed its highs at $64,000. Since then, the accumulation undertook a descending trend until the recent spike. In a very unusual event, whale accumulation shot up from around 3.5 million to 3.8 million.

The accumulation was in wake of the prices slashing below $18,000 in the recent past. These whale addresses are holding BTC in between 1000 to 10,000 BTC. A notable price recovery was witnessed after a spike in whale holdings as Bitcoin firmly holds above $20,000 until the press time.

However, the highest levels the whale accumulated was close to 4 million. If the accumulation slowly ranges back to these levels, the fear of a drastic drop may hover on the BTC price. And if the asset drops by 50% as happened before, the price could drop below $10,000.

What Ethereum Whales Are Buying

Ethereum whales on the other hand, along with accumulating ETH, have transferred their capital into many DeFi’s & NFT tokens. According to an analytical platform, the top 100 Ethereum whales have now shifted their focus on Celer Network. Considering the whale holding of the top 2000 whales, Shiba INU remain the most held token worth more than $577 million followed by Shib Doge.

Along with these tokens, the ETH whales are also holding JasmyCoin (JASMY), Bancor (BNT), Uniswap (UNI), Enjin Coin(ENJ), Polygon (MATIC) & PAXG. The most-traded token currently is Polygon, while the most held token is Decentraland (MANA). On the other hand, the biggest token position by dollar remains SHIB.

It is also noticed that the ETH whales currently selling more than buying and hence the whale fear index is 26.

Whales on Other Chains!

The whales on BinanceSmartChain, Fantom, Polygon and Avalanche have also been rising in recent times. The whales on BSC have traded Galaxy Heros Coin(GHC) heavily in recent times while holding Pancakeswap (CAKE) tokens largely. However, the highest holding in terms of dollar value remains Bitcoin BEP2 (BTCB) token. 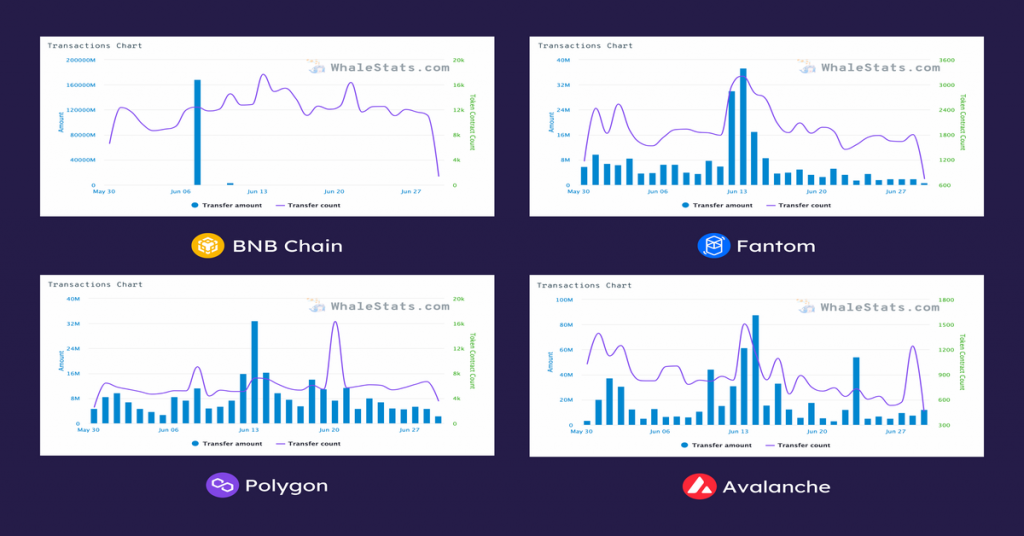 Similarly, the whales on the Fantom chain have traded by the whales heavily on Paintbrush (BRUSH) token, held USD Coin (USDC) stablecoin largely and the same coin is the biggest token position by dollar value.

Coming to the Polygon chain, Blocknet(BLOCK) is the most traded among the top 100 whales. The widely held token by these whales if Minereum (MNEP) and the biggest position in dollar value is MAI (MI MATIC). Considering the Avalanche whales, the most traded token is Step App (FITFI) and widely held token and the biggest dollar value token is the USD coin (USDC).

What Will the Whales do in the Upcoming Days?

Considering the previous trend, it is quite evident that some whales do fall into the FUD or rather create FUD. It can also be said that the sudden collapse in May 2021 was fueled by the whales. Since then, the whales have kept distinct from large accumulations. Therefore, it may be an indication that BTC’s price is yet to reach its bottoms, as the whales accumulate during the bottoms themselves.

In recent times, the crypto markets have been exposed to a couple of events that hampered their growth miserably. Beginning with the LUNA-UST crash, followed by Celsius Network halt, later the 3AC crisis and a couple of liquidity crises in some exchanges. Markets have always reacted negatively in all situations. Moreover, now that 3AC is been reportedly ordered to be liquidated, yet another market crash may be fast approaching.

This may be when the whales irrespective of the chains may jump in action to gather the holdings let out by the weak hands. By doing so, they may hold a huge share of the tokens in circulation which is quite sufficient to manipulate the price actions and movements shortly.